The Food and Drug Administration (FDA) is planning on green lighting plans to make America’s supply of monkeypox vaccines last longer by slashing the dosage 80 percent and changing the way it is delivered to patients.

Bloomberg reports that in order to quell a shortage of the Jynneos monkeypox vaccine officials are planning on delivering doses of the vaccine that are only 0.1 milliliter (ml) – a massive fall from the 0.5 ml standard dose. They believe that using an intradermal injection – which delivers the vaccine between the layers of the skin instead of underneath the skin’s fat – will make sure the shot is just as effective.

The FDA is set to approve plans to cut the dosage of the Jynneos monkeypox vaccine by 80%, and deliver it intradermally in a bid to solve America’s vaccine shortage (file photo)

It comes in response to a massive shortage in monkeypox vaccines available in the U.S. Officials have so far distributed only 600,000 doses to state and local jurisdictions around the country. When jabs have become available in major population centers like New York City, appointments have been filled within minutes due to the exceedingly high demand.

The science behind the move is limited, though. A single 2015 study funded by the National Institutes of Health shows that vaccines can be just as effective through the intradermal route, but no other data exists. This would be a massive shift in America’s response to the virus based on limited existing evidence.

The move comes as the U.S. logged a record 1,424 cases on Monday, the highest total since the global outbreak first found its way stateside in May. In total, the U.S. has logged 8,934 infections – the most of any country.

This outbreak could soon get worse as well. The new school year is set to begin at colleges and universities across the U.S. in the coming weeks. Young students are more likely to engage in careless sexual behavior, creating a perfect storm for potential monkeypox outbreaks around the nation. 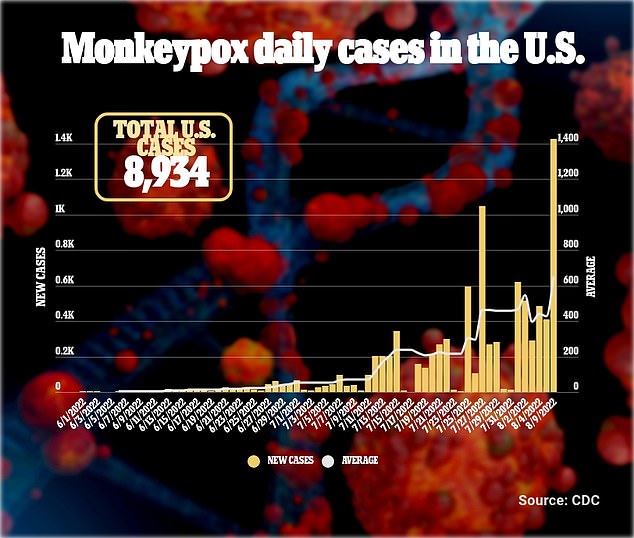 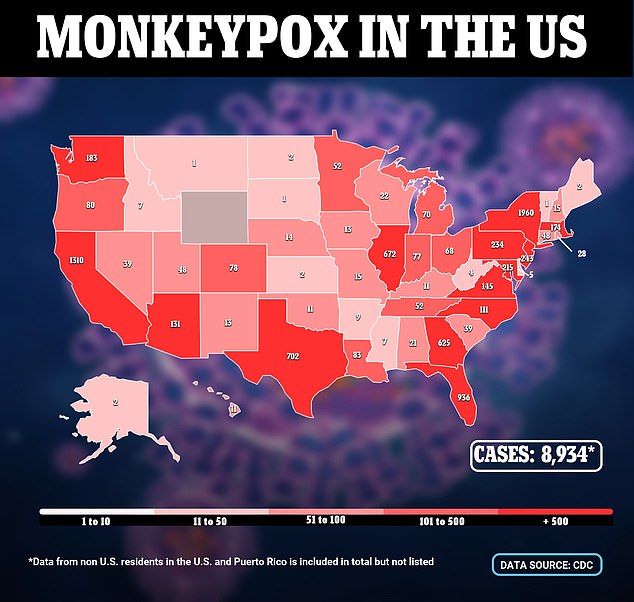 Officials wrote in an email obtained by Bloomberg that the FDA will soon give emergency clearance to the rationed jabs.

The Jynneos vaccine was developed by Bavarian Nordic for smallpox, but it also effective against monkeypox.

Last week, FDA Chief Robert Califf explained that this new approach will allow the nation to make the most of its resources without losing effectiveness.

‘The upside is you can stretch out doses,’ Dr John Moore, a virologist at Cornell University told the New York Times of the plan.

‘The downside is, if you cut it too far or take too many liberties, you reduce the efficacy. And how are you going to know that? It’s educated guesswork.’

Federal officials currently have access to around 1.1 million shots – well short of enough to cover vulnerable populations in America.

Last week, the Department of Health and Human Services declared the virus a public health emergency, opening the door for regulators to make these types of moves. 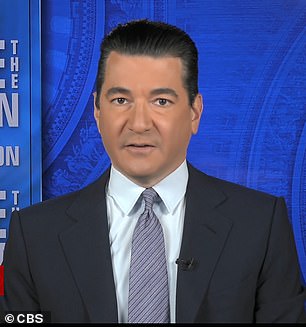 But there are some questions as to whether this is the right move.

In 2015, researchers gathered that smallpox vaccines were just as effective when delivered in smaller doses if the injection was performed intradermally.

It was just one study performed on 524 participants, though, and using a different vaccine.

Currently, shots are mainly reserved for men who have sex with other men – though some exposed people have been granted the shot as a precaution.

Access to the shots may need to be expanded soon. Some officials fear that the virus has already escaped that sexual network and is now in other groups as well.

‘There’s a potential to get this back in the box but its going to be very difficult at this point,’ Dr Scott Gottlieb, formed FDA chief, told CBS’ Face the Nation over the weekend.

‘We’re continuing to look for cases in the community of men who have sex with men, its primarily spreading in that community, but there’s no question it has spread outside that community at this point and I think we need to start looking for cases more broadly.’ 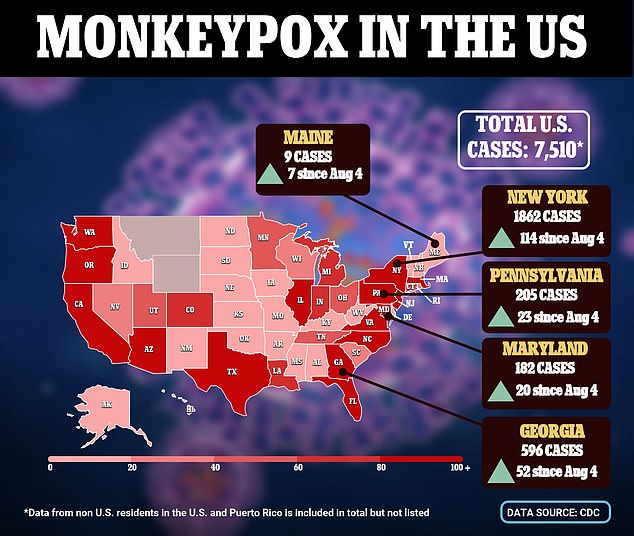 While exact federal data is not available, Centers for Disease Control and Prevention (CDC) Director Dr Rochelle Walensky said during a briefing last week that gay and bisexual men still make up a majority of cases.

The CDC has greatly expanded its testing capacity in recent weeks, now being able to perform 80,000 per week across its own testing and agreements set up with private partners.

Last week Walensky said that only around ten percent of America’s testing capacity was being used, opening the door for significant expansions in the amount of people that should be tested.

Gottlieb said that any person with an atypical case of either shingles or herpes should be tested for monkeypox at this point.

Expanding testing will either find more cases – giving officials more information they can use to control the outbreak – or will confirm more people as negative and confirm areas where the virus is not spreading.

He also believes the CDC should begin wastewater surveillance – which can give more general pictures of where the virus is spreading without individual testing.

Despite his concerns, Gottlieb does not think the virus has reached a point where the average American should be worried.

‘I don’t think this is something people need to be generally worried about,’ he explained.

‘I think the incidence of this infection in the broader community is still very low. Your risk of coming into contact with monkeypox is still exceedingly low outside of certain social networks where you see a higher case rate.

‘If you want to contain it… we need to start looking more widely for it.’