The U.S.’s national drug problem has reached a harrowing mark.

From April 2020 to April 2021, the first full year of the COVID-19 pandemic, a total of 100,306 Americans died of drug overdoses, according to a new report from the U.S. Centers for Disease Control and Prevention (CDC).

It is the first time that more than 100,000 drug overdose deaths were reported during a 12-month period.

Drug abuse, and specifically opioid abuse, has long been an issue in the U.S., and the pandemic proved to be a setback in the nation’s battle against overdoses.

In a statement on Tuesday, President Joe Biden called the figured a ‘tragic milestone.’

‘As we continue to make strides to defeat the COVID-19 pandemic, we cannot overlook this epidemic of loss, which has touched families and communities across the country,’ the statement read.

‘As we grieve those we’ve lost and honor their memories, my Administration is committed to doing everything in our power to address addiction and end the overdose epidemic.’

More than 100,000 Americans died of drug overdoses from April 2020 to April 2021, the most ever recorded over a single 12 month span. More than 78,000 of those deaths were caused by opioids. Pictured: Percocet tablets, a popular opioid

Drug overdose deaths in the U.S. reached an all-time high during the first month of COVID-19 related lockdowns

‘As we continue to make strides to defeat the COVID-19 pandemic, we cannot overlook this epidemic of loss, which has touched families and communities across the country,’ President Joe Biden said in a statement.

‘As we grieve those we’ve lost and honor their memories, my Administration is committed to doing everything in our power to address addiction and end the overdose epidemic.’

The report, published on Wednesday by the CDC, finds that opioids are the biggest culprit for the surge in opioid deaths.

More than 75 percent, or 75,673, of overdose deaths during the lockdown were caused by opioids.

It is an increase of around 50 percent from the 56,064 opioid deaths recorded over the previous 12 months.

HOW AMERICA GOT HOOKED ON OPIOIDS

Prescription opioids and illicit drugs have become incredibly pervasive throughout the US, and things are only getting worse.

In the early 2000s, the FDA and CDC started to notice a steady increase in cases of opioid addiction and overdose. In 2013, they issued guidelines to curb addiction.

However, that same year – now regarded as the year the epidemic took hold – a CDC report revealed an unprecedented surge in rates of opioid addiction.

Overdose deaths are now the leading cause of death among young Americans – killing more in a year than were ever killed annually by HIV, gun violence or car crashes.

In 2019, the CDC revealed that nearly 71,000 Americans died from drug overdoses.

It means that drug overdoses are currently the leading cause of death for Americans under 50 years old.

Vermont suffered the largest increase in overdose deaths, with the 211 deaths during the first year of lockdowns being an 85 percent increase over the previous year.

West Virginia (62 percent increase), Kentucky (57 percent) and Louisiana (56 percent) were among the largest risers as well.

Not all states recorded increases in overdose deaths, though.

South Dakota reported a 17 percent decrease in overdose deaths, from 77 during the lockdown to 93 the year before.

In total, 15 states recorded increases of more than 40 percent year-over-year.

The figures break a newly set record from only three months ago.

At the time, it was a staggering figure, and the most ever recorded in a single year.

‘This is the highest number of overdose deaths ever recorded in a 12-month period, and the largest increase since at least 1999,’ said Dr Nora Volkow, director of the National Institute on Drug Abuse, in a statement in August.

She said that the disruptions to every day life, and stressors caused by the pandemic were among the reasons opioid deaths sharply increased during the pandemic.

‘This has been an incredibly uncertain and stressful time for many people and we are seeing an increase in drug consumption, difficulty in accessing life-saving treatments for substance use disorders, and a tragic rise in overdose deaths.

‘As we continue to address both the COVID-19 pandemic and the opioid crisis, we must prioritize making treatment options more widely available to people with substance use disorders.’

The updated figure being reported removes the start of 2020, before the COVID-19 pandemic had begun, and adds the January and February months where the pandemic was at its worst to the figures.

Many of these deaths can be attributed to dangerous synthetic opioids like fentanyl, which is 100 stronger than morphine.

Fentanyl is often be mixed or cut into other drugs like cocaine or methamphetamines, and a person could unknowingly use it in a fatal dose.

In 2020, over 60 percent of opioid deaths were attributable to synthetic versions of the drug, after accounting for less than one in five the previous year. 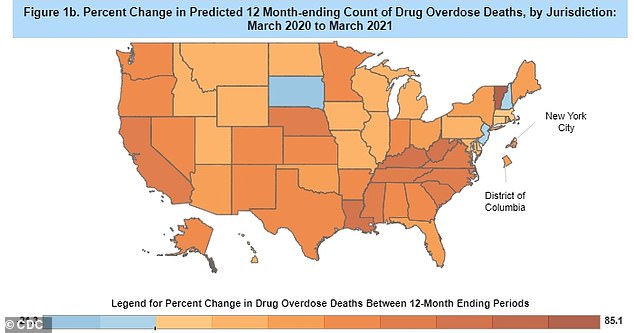 Vermont reported the biggest increase in overdose deaths, at 88%. In total, 15 U.S. states recorded an increase of 40% or more. Three states, South Dakota, New Jersey and New Hampshire, recorded decreases during the first year of lockdown 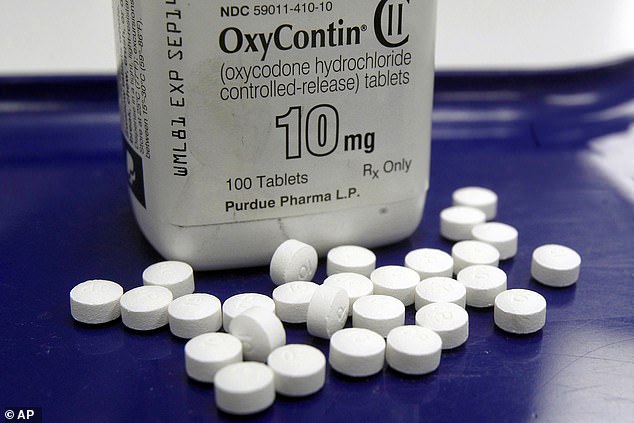 The U.S. set a record 93,000 opioid deaths in 2020, with a majority of those deaths being due to opioids as well. Synthetic opioids have become a major problem in America, accounting for 60% of opioid deaths in 2020. Pictured: OxyContin tablets, a popular opioid painkiller

While America’s overdose crisis affects the entire country, the Appalachian and south eastern regions of the U.S. have been hit the hardest in recent years.

In his statement, Biden said his administration is working on expanding health care coverage so Americans experiencing additions can receive treatment for substance use disorder and mental health.

‘We are strengthening prevention, promoting harm reduction, expanding treatment, and supporting people in recovery, as well as reducing the supply of harmful substances in our communities. substance use disorder and mental health. And we won’t let up,’ the statement read.

‘To all those families who have mourned a loved one and to all those people who are facing addiction or are in recovery: you are in our hearts, and you are not alone. Together, we will turn the tide on this epidemic.’