The line judge struck by Novak Djokovic woke up on Monday to find herself subject to hundreds of vile messages on social media after his default from the US Open.

There were discussions among tournament organisers about whether to temporarily stand down Kentucky-based official Laura Clark after the barrage of hate from the world No 1’s fans.

The US Open was reluctant to formally release her name, but a Serbian tabloid revealed her Instagram details, leading to a barrage of deeply personal abuse.

Some of the milder stuff referenced her interest in wine, and accused her play acting to try and get their hero disqualified. Much of it appeared to come from Serbia and the more extreme wing of Djokovic’s online fan base, who are notoriously aggressive in their insults whenever they feel their man is wronged. 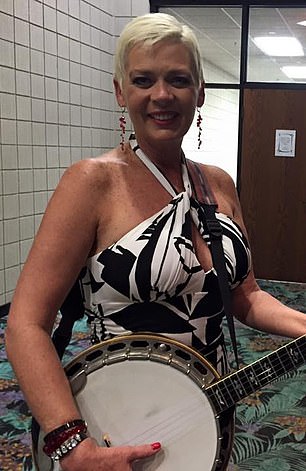 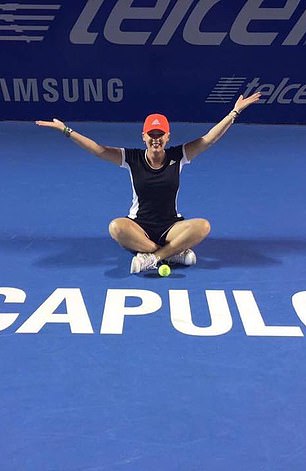 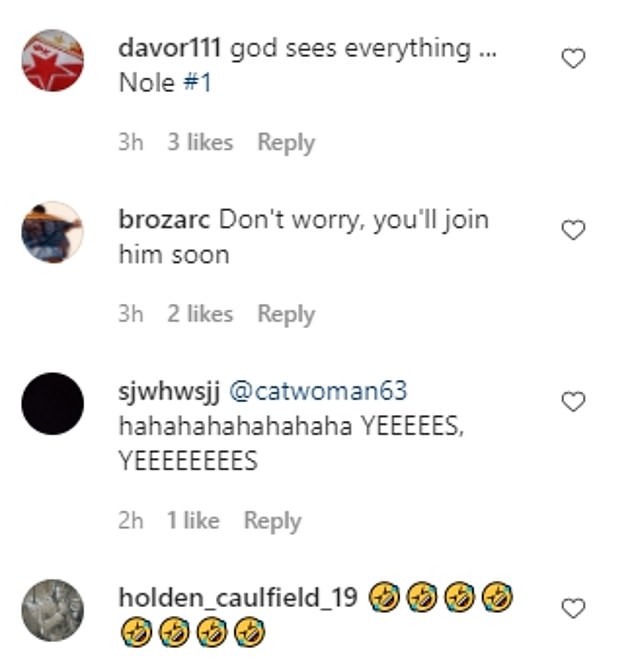 Clark’s son died in 2008, and one of Djokovic’s fans told her ‘don’t worry, you’ll join him soon’

In one post, which was dedicated to her late son, a user wrote: ‘Don’t worry, you’ll join him soon’ while another posted: ‘hahahahahahahaha YEEEEES, YEEEEEEEES.’

Almost every post on Clark’s Instagram account – going as far back as her first picture in September 2011 – has been spammed with comments from Djokovic’s fans, with many calling her ‘sick’ and an ‘alcoholic’. 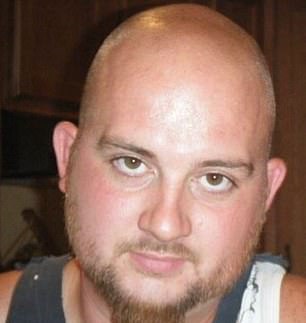 Clark’s son Josh died in a motorcycle accident in 2008, and a sick troll wrote: ‘Don’t worry, you’ll join him soon’

Clark promotes a wine company in a series of different posts on her social media profiles, and one user wrote: ‘You can drink litres of alcohol but cannot survive small tennis ball?? Bad acting. Shameless.’

Clark, who has worked on the main tour and in Davis Cup matches, is part of the American-only line judging crews operating this fortnight at Flushing Meadows, who are being housed in their own bubble away from the players.

She unwittingly found herself tied up in the biggest controversy involving a line judge since the 2009 US Open, when Serena Williams aggressively threatened Japanese official Shino Tsurubuchi after she was foot faulted at a crucial juncture of her semi-final.

Speaking to local magazine Owensboro Living in 2014, Clark said she had previously had a lip busted by a 130mph serve at a tournament in Louisville.

‘The only times we are seen by the people are during our mess-ups. Period,’ she said.

‘The first time you are on a big court it is terrifying, and it is the coolest, most terrifying experience in the whole world. You are shaking so hard and you’re sure they can see you shaking.’

However, she said she sympathised with top players and the pressure they were under – saying there are ‘no calls that are not significant’.

Clark has sat in the umpire’s chair and acted as tournament referee as well as being a line judge, saying that being a tennis official is ‘not something you are going to make a huge amount of money doing’ – but adding that ‘I would do it for free’.

Friends said on Sunday night that she was not seriously hurt by the ball to the throat, and Djokovic offered her an apology for having ’caused her so much stress’. 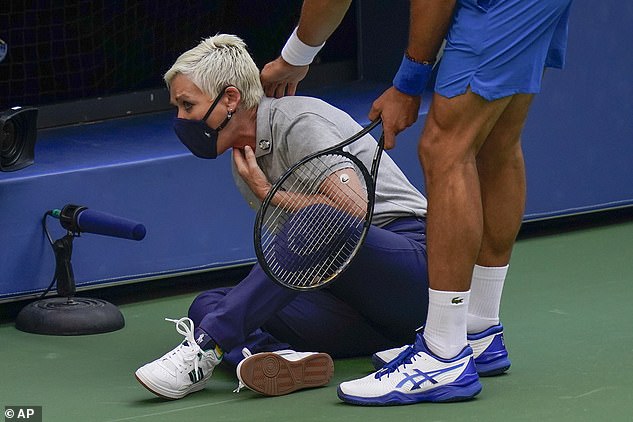 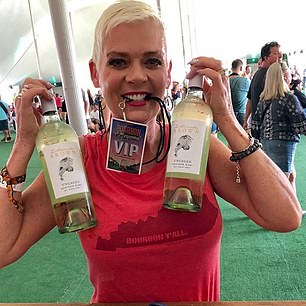 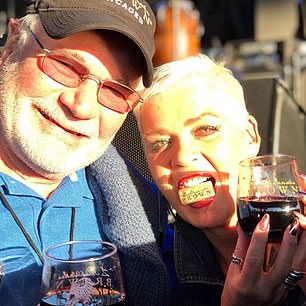 Djokovic was on his way home, having posted an apology late on Sunday night for his behaviour.

In it he mentioned that he was deliberately not mentioning her name to protect her privacy. Fat chance.

He went on to say: ‘This whole situation has left me really sad and empty. I checked on the lines person and the tournament told me that thank God she is feeling ok. I’m extremely sorry to have caused her such stress. So unintended. So wrong.’

He left without doing his obligatory media conference and was fined £7,700 for unsportsmanlike conduct in addition to the confiscation of £189,000 in prize money. A gracious touch would have been to call his social media stormtroopers off an entirely innocent party.

The fines will be small change for Djokovic. He will feel far more keenly the loss of a golden chance to move within one Grand Slam title of Rafael Nadal, and two of Roger Federer, in the over-arching race to build up the claim to be the greatest ever male player.

This was arguably the most dramatic disqualification since British umpire Gerry Armstrong, now the Wimbledon Referee, booted John McEnroe from the Australian Open 1990 for verbal abuse. 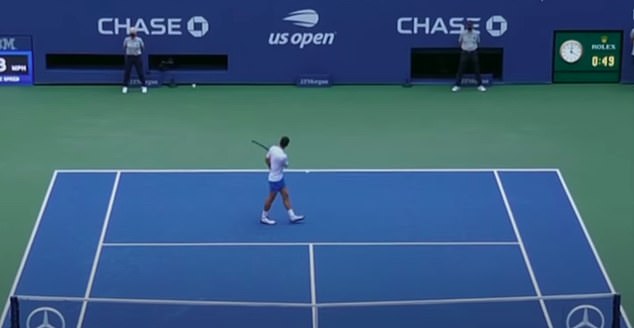 The moment the world No 1 hits the ball behind him in frustration, striking the line judge 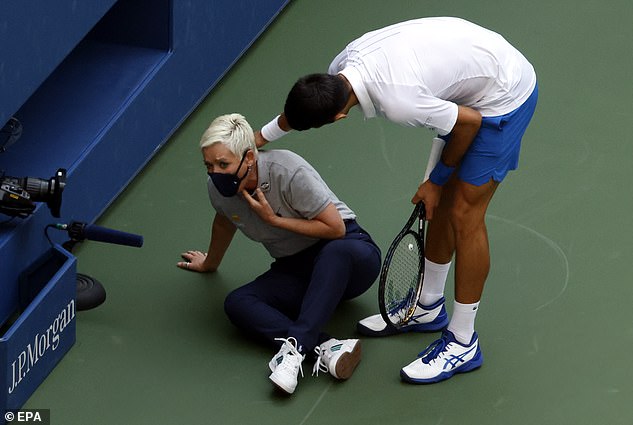 Djokovic, the world No 1 tennis player, checks to see if Clark is okay at the side of the court 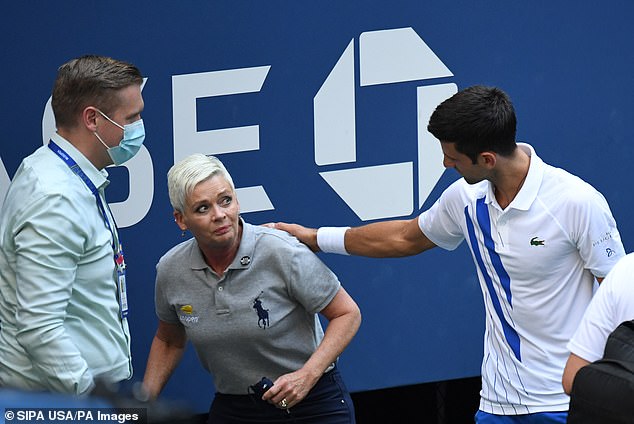 Clark looks up at Djokovic after the incident, which resulted in the Serbian being disqualified

McEnroe also criticised Djokovic on Sunday night for leaving the grounds without a press conference, telling him he should ‘man up’ and apologise in person rather than on Instagram.

‘He’s got a lot of things going for him, but this is a stain that he’s not going to be able to erase,’ said McEnroe, who was known for his own volatile behaviour on the court.

Asked whether he thought Djokovic should have been allowed to continue to play, Carreno Busta shrugged and replied: ‘Well, the rules are the rules. … The referee and the supervisor (did) the right thing, but it’s not easy to do it.’

It comes four years after Novak Djokovic bullishly dismissed concerns over his on-court frustrations in an angry exchange with a reporter.

The Serbian had hit a ball into the crowd during his 3-set win over Dominic Thiem. Months early he nearly hit an official after throwing his raquet in the French Open and he was asked if he feared his behaviour would one day ‘cost him dearly’.

He laughed off his question and said: ‘You guys are unbelievable. You’re always picking these kind of things.’

‘I’m the only player that shows his frustration on the court? That’s what you are saying? It is not an issue for me. It’s not the first time I did it.’

Djokovic had looked extremely likely to add to his seventeen Major titles before his disqualification at the US Open and had been in imperious form, boasting a 26-0 record for 2020 which may have extended to the end of this strange season.

The disqualification is a massive blow to his hopes of usurping Rafael Nadal and Roger Federer, both absent from Flushing Meadows, who stand on nineteen and twenty Grand Slam titles respectively. 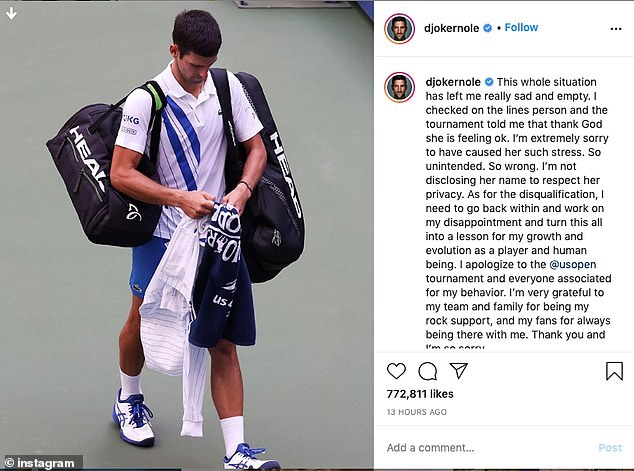 In an apology posted to Instagram, Djokovic said the situation has left him feeling ‘really sad’

His participation in the French Open, postponed until later this month, was confirmed on Monday night by Tournament Director Guy Forget. Whether or not he will take up his place in next week’s Italian Open is far less likely as he returns home to lick gaping wounds.

The clay of Paris is the most difficult environment in which for him to win. Nadal is putting everything into collecting another title there, while Dominic Thiem is already established as a formidable challenger.

As someone who can be thrown off by adverse crowd reaction it will be interesting to see how he will be greeted in Paris. Audiences will, however, be reduced to 5,000 on the main courts there as part of Covid restrictions. Prize money is down to €38million from €42m.

At the age of 33 Djokovic can hardly afford to spurn such opportunities at Slams, especially with no Nadal or Federer to go through.

One upshot of the drama is that there will be a long-awaited new Grand Slam champion in men’s tennis for the first time since Marin Cilic won in New York six years ago.

There appears little question that Djokovic’s angry swish of the racket did not mean to injure anyone. Immediately that he saw he had hit his unintended target he gestured his apology, knowing that he was in deep trouble.

Tim Henman, who was defaulted from Wimbledon 25 years ago for a similar mishap, said Djokovic’s expulsion was a ‘massive shock’ but ‘there’s no doubt it’s the right decision’.

‘It’s the right decision. It happened to me at Wimbledon 1995 in the same scenario, You have to be responsible for your actions, when you look at the facts you have to be defaulted,’ Henman said. 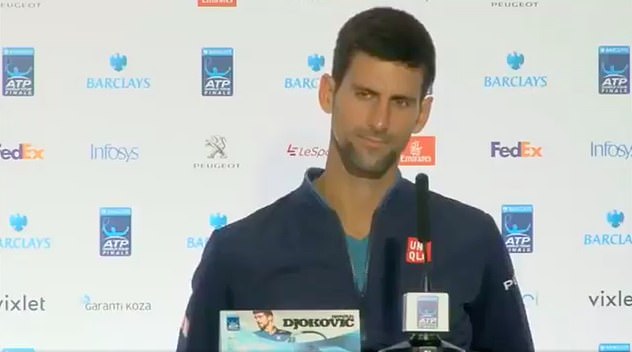 This time it was borne of someone who sometimes acts as if he is above the sport, as he tries to cement a legacy comparable to that of Nadal and Federer.

Djokovic has sailed close to the wind many times before, with instances of him thrashing balls away in anger that have gone into the crowd, or snatching towels from ballkids in an aggressive manner.

There was a notable incident in 2016 at the French Open when he played Czech Tomas Berdych. He hurled his racket into the clay in the direction of a line judge, and when it bounced up it was only thanks to the official’s reflexes that is missed his head. He could have been gone there as well, and not gone on to win his solitary title at Roland Garros.

In a way this is an appropriate end to a lockdown summer that has badly tarnished the reputation of a highly intelligent, driven and complex man who is, without doubt, among the greatest players ever.

He organised the disastrous Adria Tour around the Balkans, which needed to abandoned when numerous participants, including himself and his wife, tested positive for Coronavirus.

The whole guiding principle behind the exhibition series seemed to be that Covid 19 was something that could be overlooked, and there was a marked lack of social distancing running through the whole production. It overshadowed his substantial charitable donations to Covid charities. 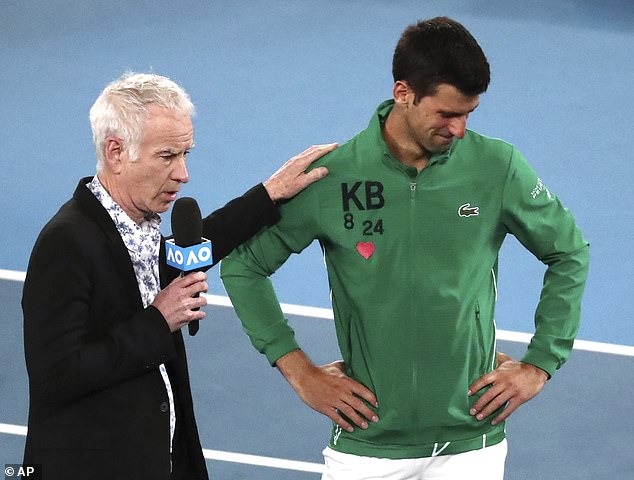 Before that he was criticised by one of Serbia’s top government epidemiologists for his anti-vaccine views.

With no Djokovic in New York now, Thiem was trying to make it through to the last eight of the US Open on Monday night when he was tackling the fast-rising talent of Felix Auger-Aliassime in the fourth round.

Known for certain is that there will be a new men’s Major champion for the first time since 2014.

It is quite a thought what has been required to make a reality this change to the status quo: a global pandemic, the absence of Nadal and Federer and a sensational default to the world’s best player.

Already guaranteed through to Tuesday’s quarter finals is the main beneficiary of Djokovic’s petulance, Pablo Carreno Busta, who will face another exciting young Canadian talent in Denis Shapovalov.

Croatian Borna Coric will take on the No 5 seed, Alex Zverev of Germany. One of those four is sure to play in next Sunday’s final.