The U.S. military covered up 2019 airstrikes in Syria that killed up to 64 women and children, a possible war crime, during the battle against Islamic State, according to a new report.

The two back-to-back airstrikes near the town of Baghuz were ordered by a classified American special operations unit tasked with ground operations in Syria, the New York Times reported on Saturday.

‘We just dropped on 50 women and children,’ a shocked analyst watching drone footage of the strike in real time told colleagues on a secure chat system.

In reality, the death toll in the March 19, 2019 was even higher, an assessment found, making the incident potentially one of the largest civilian casualty events in the US war against ISIS.

Heavy smoke rises above the Islamic State (IS) group’s last remaining position in the village of Baghouz on March 18, 2019, the same day as the alleged strikes that killed civilians 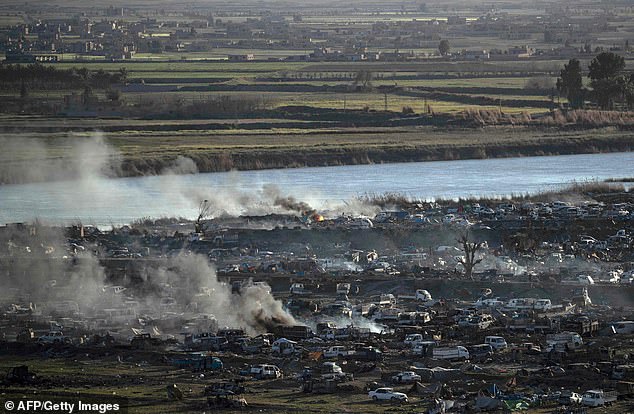 Smoke rises in the ISIS group’s last remaining position on the eastern banks of the Euphrates River in the village of Baghouz on March 18, 2019 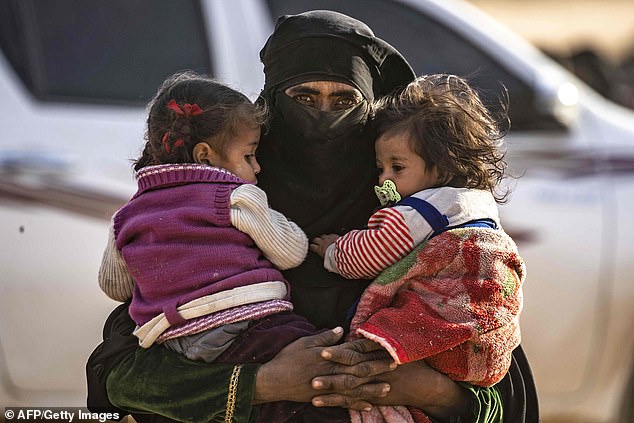 A Syrian woman holds two little girls against her chest as they joined hundreds of civilians who fled the final ISIS stronghold in Baghuz on March 5, 2019, days prior to the bomb strikes

The strikes, called in by the secretive special operations group Task Force 9, were carried out by American F-15E attack jets that dropped one 500-pound bomb and two 2,000-pound bombs.

U.S. Central Command, which oversaw U.S. air operations in Syria, acknowledged the strikes for the first time this week and claimed they were justified.

In a statement to DailyMail.com, Central Command reiterated the account it gave the newspaper that 80 people were killed in the strikes including 16 Islamic State fighters and just four civilians.

The military said it was unclear if the other 60 people were civilians, partly because women and children could have been combatants.

In Sunday’s statement, the military said the strikes were ‘legitimate self-defense,’ proportional and that ‘appropriate steps were taken to rule out the presence of civilians.’

‘We abhor the loss of innocent life and take all possible measures to prevent them. In this case, we self-reported and investigated the strike according to our own evidence and take full responsibility for the unintended loss of life,’ Central Command said. 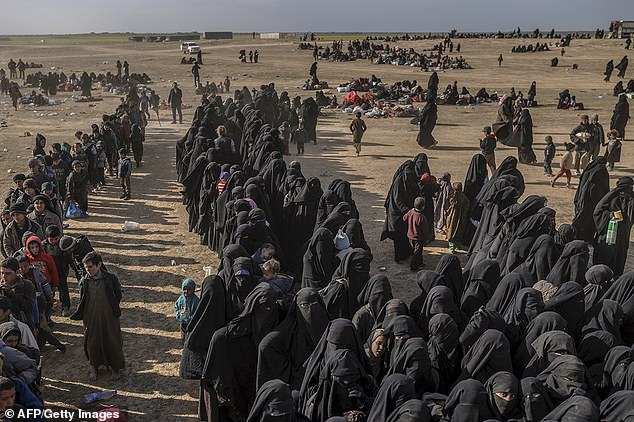 Although many women and children fled Baghuz (as seen above) before the final battle, the Pentagon says that some remained and took up arms 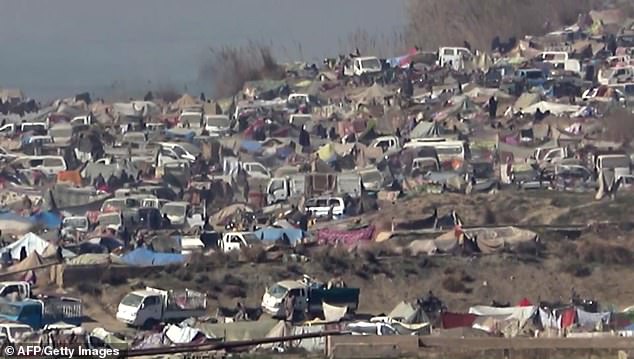 The strike unfolded as ISIS fighters were making their final stand in a crowded, dirty camp (above) on the banks of the Euphrates River in Baghuz

‘It is important to understand that ISIS decided to put their own families at risk when all avenues of escape were afforded to them,’ the statement said.

‘It is also important to note that some women and children, whether through indoctrination or choice, decided to take up arms in this battle and as such could not strictly be classified as civilians.’

The number of civilians among the 60 fatalities could not be determined because ‘multiple armed women and at least one armed child were observed’ in video of the events, it said, adding that the majority of the 60 were likely combatants.

Central Command said the strikes took place while Syrian Democratic Forces (SDF) were under heavy fire and in danger of being overrun and the SDF had reported the area clear of civilians.

The Defense Department’s inspector general launched an inquiry into the 2019 incident, but its report was ultimately ‘stripped’ of any mention of the bombing and a thorough, independent probe never took place, according to the Times.

The newspaper said its report was based on confidential documents and descriptions of classified reports, as well as interviews with personnel directly involved. 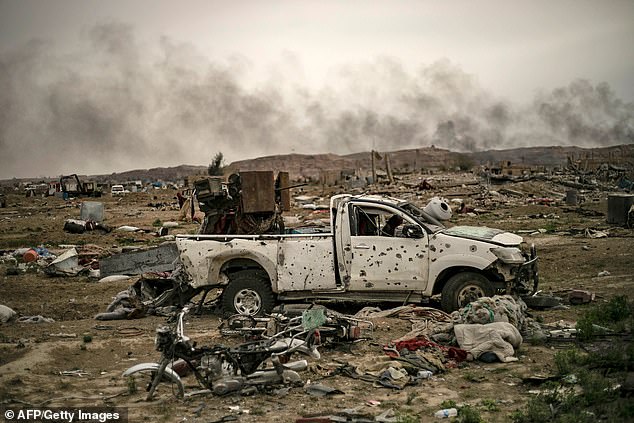 Smoke rises behind destroyed vehicles and damaged buildings in the village of Baghuz in Syria’s eastern Deir Ezzor province near the Iraqi border on March 24, 2019 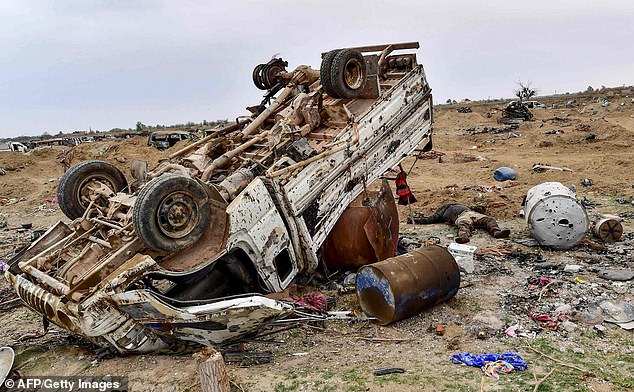 Wreckage and the body of an ISIS fighter are seen after SDF forces wiped out the group’s final stronghold in Baghuz on March 24, 2019

An Air Force lawyer present in the operations center at the time believed the strikes were possible war crimes and later alerted the Defense Department’s inspector general and the Senate Armed Services Committee when no action was taken, the Times said.

The Air Force lawyer, Lt. Col. Dean Korsak, sent the Senate Armed Services Committee a 10-page letter in May describing the strike and what he viewed as a ‘systematic failure’ on civilian casualty reporting. 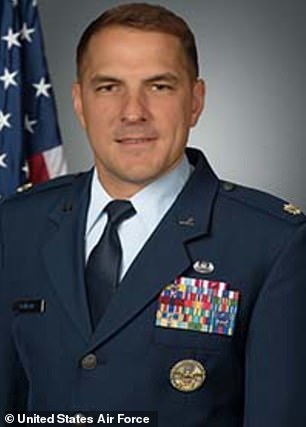 The strike unfolded as ISIS fighters were making their final stand in a crowded, dirty camp on the banks of the Euphrates River in Baghuz.

The caliphate’s once sprawling territory had shrunk to just a few square miles, and the final hard-core ISIS fighters and their families made a last stand, surrounded by US coalition forces.

On the morning of the bombing in question, ISIS had launched a last-ditch offensive to attempt to break coalition lines, and Task Force 9 called in waves of drone strikes to stave off the attacks.

The F-15E strikes were apparently called in after all drones in the area had exhausted their ordnance. Task Force 9 justified the bombing as a response to an immediate threat.

Following the bomb strike, the tide of the battle turned. Within days, the final remnants of ISIS were captured or killed.

In September, the Pentagon made a rare admission of wrongdoing by confessing that a drone strike in Kabul killed 10 innocent civilians, including seven children.

The civilian casualties had already been widely reported, including by DailyMail.com.

‘In mid to late March of 2019, U.S., coalition and Syrian Democratic Forces had isolated the final remnants of the ISIS proclaimed territorial caliphate in Baghouz, Syria. The ISIS pocket included thousands of fighters and family members including women and children. The remaining fighters including some women and child combatants along with many ISIS family members, including some who were likely held against their will, decided to make a determined stand in an area that included buildings, tunnels and cliffs. Multiple entreaties to ISIS to allow family members to depart the area were rebuffed, and thousands of family members remained in the area of the fighting.

‘On March 18, 2019, five days before the end of the battle, as many as 200 hundred ISIS fighters launched a determined counterattack on SDF and coalition forces that started around 4 a.m. local time, lasted numerous hours and resulted in more than 30 SDF casualties. After more than 6 hours of fighting and dozens of strikes, numerous U.S. manned and unmanned strike platforms had departed the area due to having expended all of their ordinance. ISIS fighters had inflicted high casualties on the SDF through small arms, rocket propelled grenades, indirect fire, improvised explosive devices and suicide bombings.

‘After 10 a.m. local time, an SDF position under heavy fire and in danger of being overrun called for defensive airstrikes on ISIS fighter positions. The SDF fighters reported the area clear of civilians, and the nearest U.S. special operations forces on the ground also reported that they could observe no civilians in the area. The only remaining U.S. unmanned aerial vehicle (UAV) in the area at the time of the strike was only capable of providing standard definition full motion video (FMV) as high definition-capable UAVs that were on station earlier had departed following the expenditure of their ordinance. The remaining U.S. UAV had also expended all of its hellfire missiles and was unarmed at the time of the call.

‘The U.S. UAV on station was unable to discern any civilians in the area at the time of the SDF request. The only remaining armed strike aircraft on scene at the time of the request for air support was a U.S. F-15 with precision guided 500- and 2,000-pound bombs. With the area reported clear of civilians, and SDF positions under fire, the special operations strike cell authorized two defensive strikes on ISIS positions with two 2,000-pound precision guided munitions and one 500-pound precision guided munition from the F-15. The strikes were determined to have taken out at least 16 active ISIS fighters that were engaged in attacks on SDF positions.

‘The civilian casualty credibility assessment and the 15-6 determined through the study of all available evidence including coalition high-definition video, that several locations unobserved by the U.S. UAV with men, women, and children likely received lethal effects from the strikes. The investigations concluded that at least 4 civilians were killed and 8 were wounded from these strikes. The investigations were unable to conclusively characterize the status of more than 60 other casualties that resulted from these strikes. The reason for this uncertainty is that multiple armed women and at least one armed child were observed in the video, and the exact mixture of armed and unarmed personnel could not be conclusively determined.

‘Likely, a majority of those killed were also combatants at the time of the strike, however, it is also highly likely that there were additional civilians killed by these two strikes.

‘The 15-6 investigation concluded that these two strikes were legitimate self-defense strikes in support of SDF forces under fire, that they were proportional due to the unavailability of smaller ordinance at the time of the request, and that appropriate steps were taken to rule out the presence of civilians at the time of the strike. To prevent unintended casualties in the future, the investigation recommended requiring high-definition video for similar strikes in the future, and the requirement for the strike cell to coordinate with any coalition surveillance assets in the area at the time of the strike, and those recommendations were implemented. Finally, in accordance with the findings, the investigating officer determined that no disciplinary actions were warranted.

‘We abhor the loss of innocent life and take all possible measures to prevent them. In this case, we self-reported and investigated the strike according to our own evidence and take full responsibility for the unintended loss of life. It is important to understand that ISIS decided to put their own families at risk when all avenues of escape were afforded to them. It is also important to note that some women and children, whether through indoctrination or choice, decided to take up arms in this battle and as such could not strictly be classified as civilians. Ultimately, the determined effort of U.S., coalition and SDF forces culminated the final territorial defeat of ISIS on March 23, 2019, but it did not come without a significant cost of U.S. and partner casualties or without the regrettable loss of civilian life.’