Alexandria Ocasio-Cortez has won re-election hours after saying crime was down in New York – despite the city’s own statistics showing offenses up nearly 30 percent.

The Democrat, who campaigned with struggling New York Governor Kathy Hochul earlier on Election Day, spoke to radio show The Breakfast Club about the issue.

‘A lot of people think that crime is up, when we actually see that shootings are down, when we see that huge indicators on the most violent crime in New York City is down.’

The left-wing representative – who easily won re-election to a third term in her extremely liberal district – then criticized Mayor Eric Adams and Hochul for putting more police officers on subway platforms, claiming they were responsible for crime on the MTA rising.

‘So that also tells us from a policy perspective, adding more cops to the subway isn’t solving this problem.’ 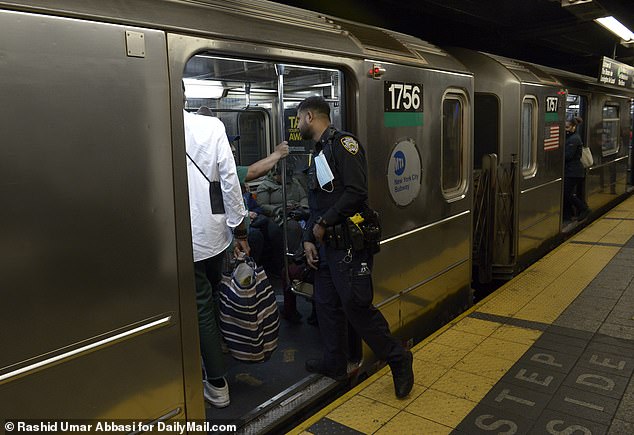 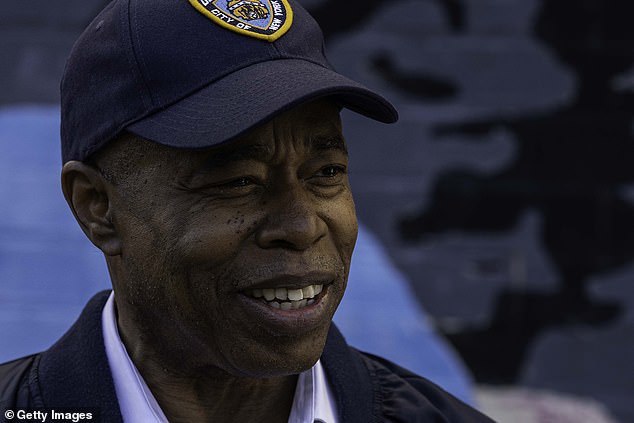 The left-wing representative then criticized Mayor Eric Adams and Hochul for putting more police officers on subway platforms, claiming they were responsible for crime on the MTA rising 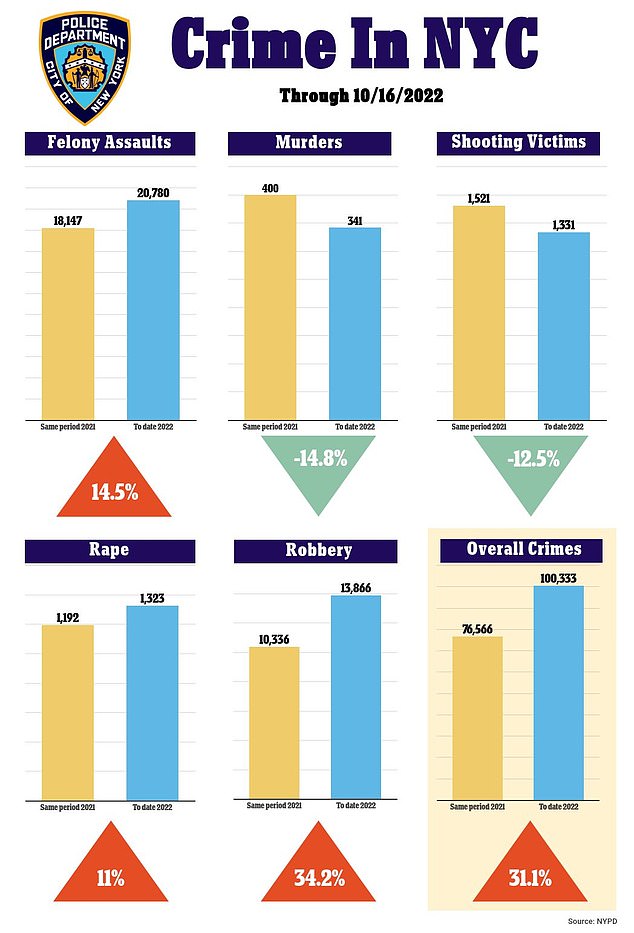 In October, Hochul ordered an additional 1,200 overtime shifts per day for police officers to patrol the subway to keep New Yorkers safe.

Overall, crime is up 31.1 percent in New York City as of mid-October, with felony assaults, rapes and robberies all up double digits. Murders are down 14.8 percent and shootings are down 12.5 percent.

As of late October, subway crime is up a whopping 41 percent in New York City, according to CNN.

Hochul was joined by Ocasio-Cortez on Tuesday morning in a last ditch attempt to appeal to voters as her advisers and top donors panicked over opponent Lee Zeldin’s sudden surge in the polls.

Both AOC and Hochul are running in today’s midterm elections and Hochul has started early vote with big lead, but Hochul, who inherited the governorship from Andrew Cuomo last year, is facing mounting resistance from Republican Lee Zeldin.

Zeldin’s comeback has spooked Hochul’s donors and advisers, some of whom fear she will pay for ignoring key issues like crime and the economy.

Some told CNBC on Tuesday they are ‘concerned’ about her narrowing lead and fear she has not reassured New Yorkers, many of whom are terrified by the ongoing crime wave across the state and largely in New York City.

Last week, Hochul tried to attract last-minute donations with a $50,000-a-table fundraiser at Manhatta, one of New York City’s glitziest restaurants which sits on the 60th floor of a towering downtown skyscraper.

On Tuesday however, she greeted voters at a polling station in Woodside, Queens, and met with members of the New York Working Families Party.  Earlier in the day, Hochul appealed to voters at diners in Manhattan while Zeldin, her Republican opponent, cast his vote in Mastic Beach. 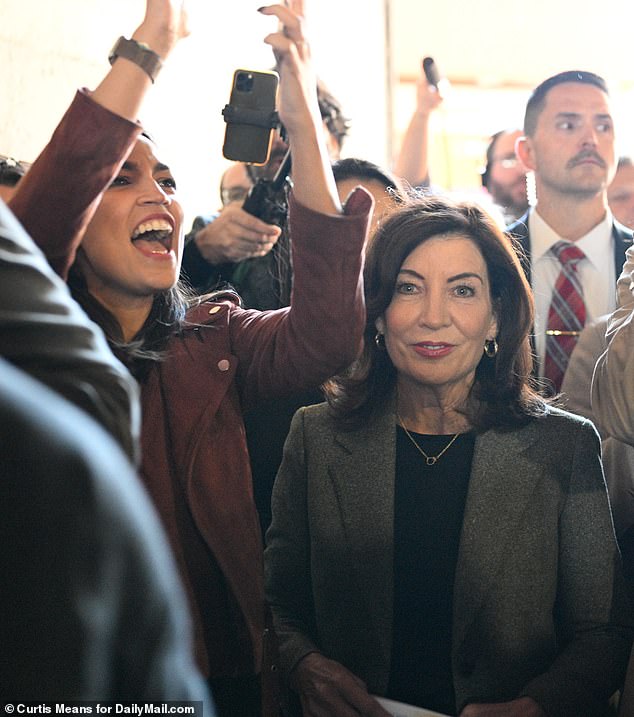 Kathy Hochul and Alexandria Ocasio Cortez make a campaign stop at the 61st subway stop in Woodside Queens to drum up final votes. AOC is expected to win in New York’s 14th Congressional District but Hochul is facing tougher resistance in the governor’s race 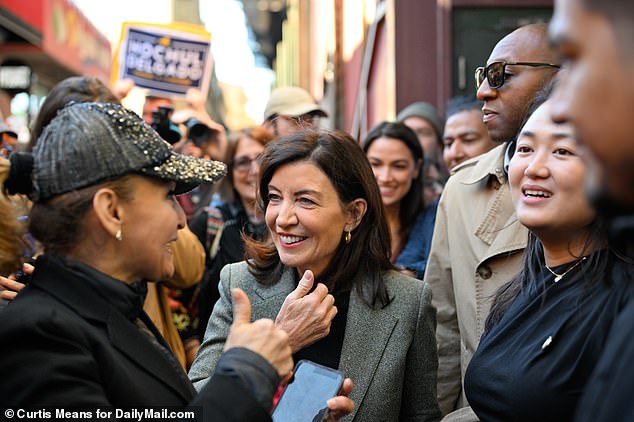 Hochul and AOC were in Queens appealing to voters as millions headed to the polls. It is the first time Hochul has run for the governorship – she inherited it in 2021 from Andrew Cuomo 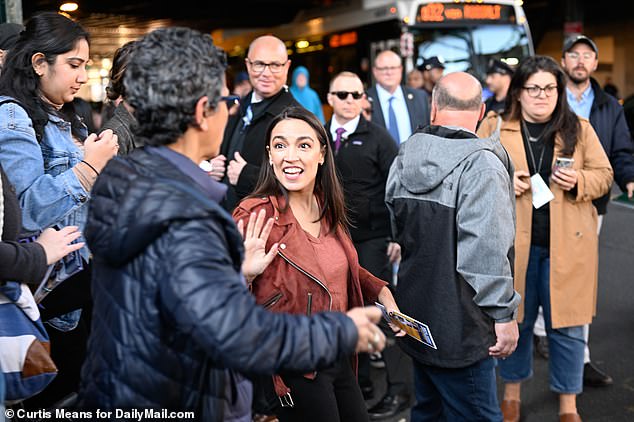 AOC, one of the Democrats’ most left-wing candidates, is expected to comfortably reclaim her seat in the House

A large part of the problem for Hochul is a surge in crime across New York City that has been blamed largely on Democrats like Hochul, Mayor Eric Adams and Manhattan DA Alvin Bragg.

CNBC reports on Tuesday that Hochul’s advisers and top donors have been warning her to stop ignoring key voter issues like crime and the economy, but that it largely fell on deaf ears.

She has been choosing instead to remind voters of her opponent’s track record of supporting anti-abortion legislation.

In in a recent debate, she even told Zeldin ‘I don’t know why that’s so important to you’ when he challenged her on crime and bail reform.

While her focus on the economy seems to have increased, her stance on crime has not become any tougher. 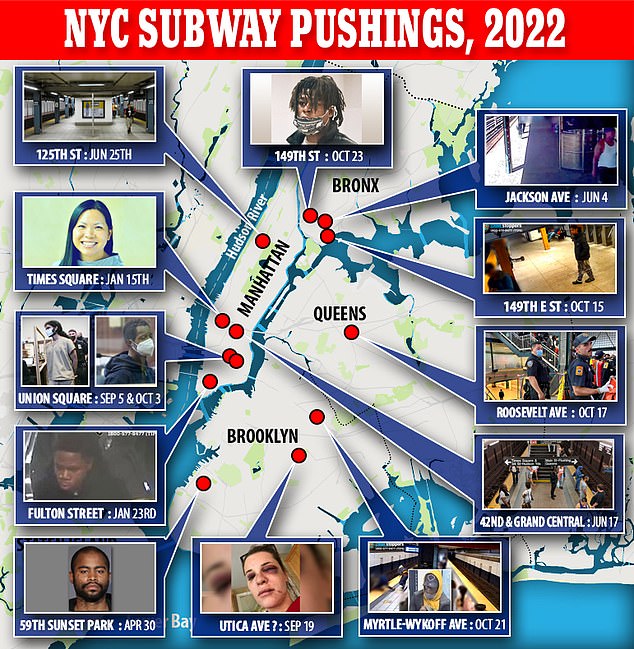 Last week, she held a last-minute fundraiser at Manhatta, a downtown hotspot and one of New York’s most expensive restaurants, where tickets cost up to $50,000-a-table. It was a final effort to attract more donation.

But her investors fear a surprise upset in today’s election that they say could be reminiscent of Trump’s shock victory in the 2016 Presidential Election.

One told CNBC anonymously that he still has ‘PTSD’ from the Trump win.

Among donors who fear Hochul is not delivering the right message is New York businessman Bernard Schwartz, who gave Hochul’s campaign $69,000.

Crimes on the transit system are also up, but the crimes represent a small fraction of the passengers on the subway system and come as ridership has also increased.

October was a particularly prolific month for subway shovers, with at least five incidents occurring so far while there are still as many days left in the month.

There were at least two subway shovings in September, three in June, one in April, and another two in January.

Manhattan saw at least six shovings – including both fatalities. The Bronx and Brooklyn saw at least three pushings each, and Queens saw one.