The US is in the midst of its worst flu outbreak in 13 years thanks to an unusually early and aggressive outbreak, a federal report has warned.

There have already been nearly 900,000 cases, 7,000 hospitalizations and 360 influenza deaths, the Centers for Disease Control and Prevention estimates.

The outbreak has arrived about six weeks early and is more severe than usual — with the virus typically arriving in late October and peaking in December or January.

Experts say restrictions brought in to fight the Covid pandemic – like masks and lockdowns – have left Americans with weak immunity against influenza.

The CDC said the burden of flu is the highest it’s been since the 2009 H1N1  pandemic, based on lab-confirmed cases, doctor visits, hospitalizations and deaths.

The South is being hit hardest by the outbreak but the wave is starting to move up the Atlantic coast.

It comes amid growing fears of a ‘tripledemic’ with cases of respiratory syncytial virus (RSV) — a virus that can be deadly in babies — rising and Covid also expected to make a comeback this winter.

This graph shows the number of flu cases diagnosed since the summer. It reveals cases have tripled in a month, amid concern over the winter surge starting earlier than normal 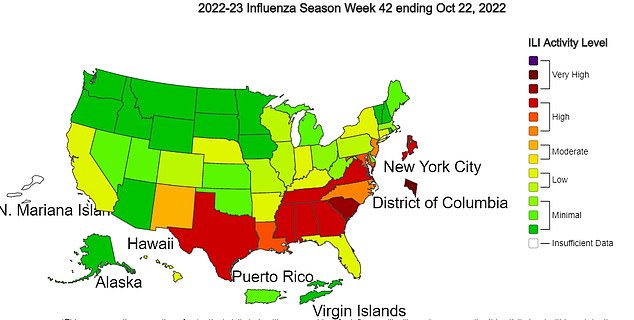 The flu and a seasonal common cold virus can fuse together and create an entirely new pathogen, scientists have shown for the first time.

Influenza A and respiratory syncytial virus (RSV) – which is wreaking havoc on US hospitals – were found to combine and create not one but two new hybrid viruses.

The experiments were done in human lung cells in a laboratory, but there is nothing to suggest the same process won’t occur in a person infected with both illnesses.

An entirely new virus would be unrecognizable to the immune system, increasing the risk of someone falling severely unwell.

That could pose a threat, given that up to 30 percent of all respiratory diseases are the result of a dual infection, according to some estimates.

The researchers from the University of Glasgow demonstrated what happens when human cells are infected by these two pathogens at the same time, a phenomenon called co-infection.

‘Not only is flu early, it also looks very severe. This is not just a preview of coming attractions. We’re already starting to see this movie. I would call it a scary movie.’

Adding to concerns is the fact flu vaccination rates are lower than usual – which some have attributed to vaccine fatigue after repeated Covid shot rollouts.

Roughly 128 million doses have been distributed so far, compared to 139 million at the same time and 154 million in 2020, according to the CDC.

It comes after a flu outbreak at a Virginia  high earlier this month forced more than 1,000 pupils – half of attendees – off sick at once.

Meanwhile, a boy in Ohio has been hospitalized after catching three common viruses at once – in another sign of how immunity has been eroded after the pandemic.

He first test positive for the flu after his family returned home from an early-September trip to Walt Disney World. He initially seemed to have recovered.

The young boy would later begin to suffer repeated fevers, reaching up to 105 degrees. Doctors were puzzled as he was suffering no other symptoms.

After a confusing six weeks, Wilder was diagnosed with all three viruses simultaneously at Dayton Children’s Hospital.

None of these viruses are considered to be especially dangerous to young children, but together they formed a severe combo.

Experts have also warned that these seemingly-mild infections will be more severe this year after two years of lockdowns and pandemic-related restrictions left immune systems untrained to deal with them.

Children’s hospitals around the country have reportedly struggled to deal with a recent surge of infections, with some being filled to the brim with young patients.