Should this really be the end for Donald Trump, future historians will surely judge that nothing better summed up his extraordinary presidency than the way he left it.

With the election excruciatingly close and Joe Biden eroding his early leads with every passing minute, Mr Trump appeared at the White House in the early hours of yesterday morning to make a statement.

Everybody was exhausted. Any other presidential candidate in history would have made some graceful, optimistic remarks about waiting for all the votes to be counted, thanked his supporters and left it at that. But not The Donald.

Surrounded by the travelling circus that is the Trump family, he proclaimed himself the winner, insisted that ‘sad people’ were trying to steal the election through ‘fraud’, and demanded that Midwestern states such as Michigan and Pennsylvania simply stop counting and crown him the victor.

Even Republican politicians winced. On one U.S. network, I watched the ultra-conservative former senator Rick Santorum shake his head in pained disbelief.

But that is Donald Trump, and always has been — outrageous, often boorish and, for some, shamelessly indifferent to the norms and decencies of a democratic society.

And yet, as the election has shown, he is also an astonishingly resilient politician, who has never lost the support of millions of ordinary Americans, and should never be written off.

Mr Trump began his presidency as he meant to go on. When he took the oath of office in January 2017, he delivered a speech utterly unlike any previous inaugural address, doubling down on his rhetoric about ‘Making America Great Again’, and proclaiming that recent years had seen ‘American carnage’.

No president in history had ever offered such a dark, uncompromising vision.

Yet even this was overshadowed by his subsequent wild claim that his inauguration had attracted the biggest crowd in history — an assertion that a single glance at a photograph showed to be grossly untrue.

Even now, after four years of Trumpism, it is sometimes hard to believe that he ever occupied the White House in the first place.

A former real estate mogul who inherited his fortune from his father, he was best known for his eye-catching gossip- column antics, as well as his turn on the TV show The Apprentice.

But there is no doubt that in 2016 he tapped a thick vein of white, working-class resentment, embodying a worldwide surge of anti-liberal, anti-Establishment populism.

When he won the presidency, unexpectedly defeating the Democratic candidate Hillary Clinton, some of his supporters insisted that he would be tamed by office.

With the right people around him, they said, he would become merely a colourful figurehead, while more sensible, conventional Republicans got on with the business of government.

We soon learned how wrong that was. Mr Trump broke almost every rule of the American presidency from the start.

His Cabinet seemed to have been fitted with a revolving door. His first Secretary of State, the oilman Rex Tillerson, lasted barely a year. His Chief of Staff, the exotically named Reince Priebus, did not even make it to the end of 2017. 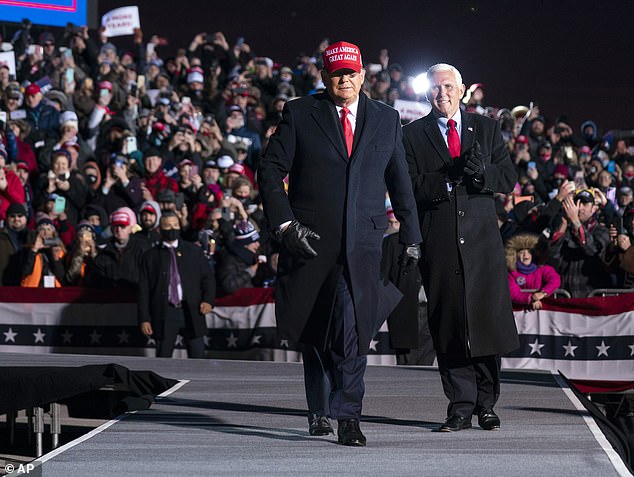 Trump fired the chiefs of the CIA and the FBI. He even fired his own Attorney General, the former Alabama senator Jeff Sessions, who had been one of the few conventional Republicans to support him for the presidential nomination.

From the outside, there was always a strong element of black comedy about the Trump administration. In one early incident, for example, he appointed the financier Anthony Scaramucci as his communications supremo.

But after 11 days, Mr Scaramucci was recorded calling Mr Priebus, a ‘****ing paranoid schizophrenic, a paranoiac’. So he had to go.

In revenge, he then turned on Trump, whom he described a ‘corrupt, racist, incompetent wannabe dictator’. With any other president, this would have been incendiary. But since this was the Trump administration, it was merely par for the course.

For many people, though, Mr Trump’s presidency was no laughing matter. His decision to separate migrant children from their parents — sometimes for months or even years — was widely lambasted as cruel and callous.

Equally shocking was his reaction to the violence at Charlottesville, where in the summer of 2017 far-Right marchers had attacked demonstrators calling for the removal of the statue of Confederate Civil War general Robert E. Lee.

Even after a woman had been killed by a far-Right nationalist, Donald Trump claimed that there had been ‘very fine people on both sides’. Some of his supporters said it was just a slip of the tongue. In fact, it was part of a pattern.

America has always been a society with deep racial divisions, but most recent presidents, whether Republican or Democrat, have tried hard to moderate them.

Although Mr Trump condemned racism and — surprisingly, to some — made striking inroads into the black vote on Tuesday night, he never seemed happier than when pouring petrol on to the flames.

With the election excruciatingly close and Joe Biden eroding his early leads with every passing minute, Mr Trump appeared at the White House in the early hours of yesterday morning to make a statement

During the peak of the Black Lives Matter protests earlier this summer, he ordered the police to use tear gas to clear the crowd so he could walk from the White House to a church and pose waving a copy of the Bible, in a naked attempt to play to his Right-wing base.

Even more striking was his refusal to denounce far-Right and white nationalist groups during his first presidential debate with Joe Biden. ‘Proud Boys,’ he said, addressing one group directly, ‘stand back and stand by!’

Of course presidents are politicians; and politicians are often ruthlessly cold-blooded. Even so, it is simply impossible to imagine any previous Republican president — such as George W. Bush, Ronald Reagan, Gerald Ford or Richard Nixon — asking a far-Right militia to ‘stand by’.

But this was pure Trump. His instinct was never to give ground, and never to make the slightest concession to the codes and expectations of Washington politics.

As a result, no president has ever elicited such strong feelings. In Britain he inspired near-slavish admiration from some politicians, such as Nigel Farage, but thousands took to the streets to protest when he made a state visit.

British Conservatives were bemused when he held Theresa May’s hand as they walked along the colonnade on her first visit to the White House, and he was accused of disrespect to the Queen when it was reported that he turned up late for tea at Windsor and appeared to walk ahead of her as they inspected the Guard.

On his travels, in fact, he often cut a bizarre and outrageous figure, as epitomised by one extraordinary photograph of the President, his pneumatic wife Melania, King Salman of Saudi Arabia and Egypt’s President Sisi, gathered in the shadows around a glowing orb like a cabal of James Bond villains.

And after decades of hostility between North Korea and the U.S., the sight of him shaking hands with its leader Kim Jong-un had many observers rubbing their eyes in disbelief. 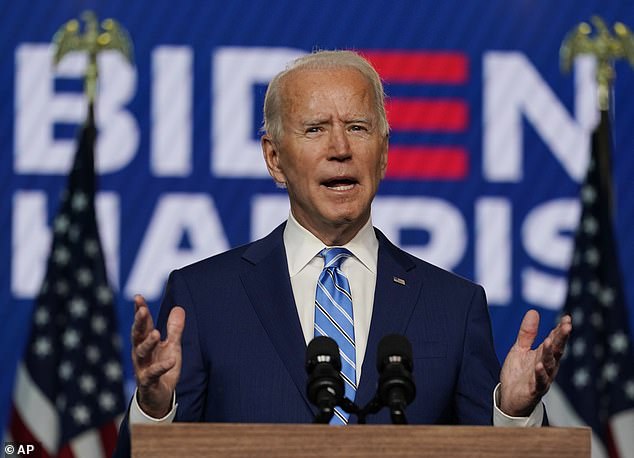 At first it seemed as if Mr Trump had achieved a stunning diplomatic breakthrough. But it soon dribbled into the sand, and before long he was issuing the usual Twitter threats about nuking North Korea if he had to.

The controversy about alleged Russian aid during the 2016 presidential election campaign dogged him throughout his time in office, and he never quite shook off his reputation as Vladimir Putin’s paid poodle — though his critics often used even stronger words.

The Democrats tried to impeach him, based on a scandal in which he allegedly made aid to Ukraine conditional on their help to discredit the family of his rival Joe Biden.

But they failed, the Senate acquitting him of all charges in February 2020. Yet there is another side to the Trump story that his critics have often neglected.

Despite his outlandish behaviour, his gratuitous rudeness, his Twitter outbursts and his defiance of presidential protocol, he never lost the support of his base.

At the start of 2020, as he rightly pointed out, the U.S. economy remained strong. The stock market was buoyant. And just as he had promised, he had largely kept young American servicemen and women out of foreign wars, eschewing the adventures so popular with his predecessors.

But then came the coronavirus, and everything was turned on his head. At first he dismissed the ‘Chinese virus’. Then he wondered aloud about injecting people with disinfectant.

He put America into lockdown, took it out again, refused to wear a mask, caught coronavirus himself, went into hospital and finally emerged like a conquering hero, albeit short of breath. And all the time, hundreds of thousands of Americans were dying. All his weaknesses, it seemed, had been laid horribly bare.

And yet, and yet — with Donald Trump, the story always had a twist.

Only a few weeks ago, he seemed doomed to a clear defeat, and perhaps even a landslide humiliation. But as the election loomed, his demonic energy returned. He campaigned as if his life depended upon it, a stark contrast with his somnambulant rival Joe Biden.

Mr Trump was nothing if not resilient and as the results poured in on Tuesday night, it was obvious that much of the old magic remained and his core support base held strong.

Among enormous swathes of the American electorate, his full-throated, tub-thumping patriotism, his disdain for metropolitan liberalism, his scorn for Black Lives Matter and his relentless promises of economic prosperity clearly struck a chord.

More than any Republican candidate in my lifetime — including Ronald Reagan who was dubbed the Great Communicator — he had an unmatched ability to reach ordinary, blue-collar, white Americans.

Indeed, Tuesday’s results show that he actually increased his support among black and Latino men — a sensational achievement for a candidate so often accused of racism.

Too often, his critics simply dismissed him as a prejudiced, demagogic buffoon. There was always an element of truth to this, of course — as exemplified by that press conference in the early hours of Wednesday morning. But there was always more to his appeal than that.

I have never been a Trump fan. I was horrified when he won the presidency, and deplore his divisive political style.

Mr Trump was that rare beast, a genuine political phenomenon. He was not just a millionaire with the common touch. He had an unparalleled ability to channel the passions of a section of the population that felt ignored, disdained and forgotten by Washington’s elite.

So if this is the end of Donald Trump, perhaps it is not the end of what he represents. Let us not forget that almost half of all Americans, after all, wanted him to remain as President. They are not going away, and their feelings will find another vehicle.

And perhaps the soap opera may have yet another twist. As I write, Mr Trump is still clinging on to the possibility of survival — and with lawsuits pending, this may not be the end after all. He is nothing if not a fighter. He has made it clear he will not accept defeat meekly.

And even though few legal experts, even in his own party, think he has a case, he seems determined for the moment at least to contest the election to the bitter end, all the way to the Supreme Court.

In any case, whether it is in January 2021 or January 2025, he will surely leave the presidency as he entered it. Shouting, brawling, jostling for attention — a people’s champion to some, a demagogic racist to others.

People will be arguing about him for centuries to come. And that, of course, is just as he would like it.