President Donald Trump raged that the ‘medical deep state’ had conspired against him, pointing to Monday’s sunny news about Pfizer’s COVID-19 vaccine, which came six days after the presidential election.

The Washington Post reported Wednesday night that Trump lashed out at the Food and Drug Administration following the disclosure that Pfizer’s COVID-19 vaccine was 90 per cent effective.

In the hours following the Monday announcement, Trump told Health and Human Services Secretary Alex Azar to ‘get to the bottom’ of what happened with Pfizer, a senior White House official told The Post.

President Donald Trump raged that the ‘medical deep state’ had conspired and lost him the election, pointing to Pfizer’s news Monday about a vaccine breakthrough, which came six days after voters went to the polls 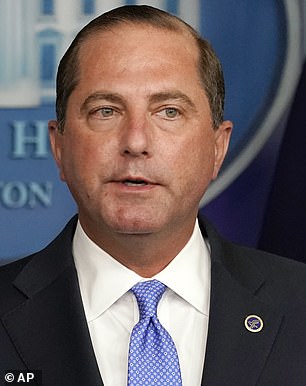 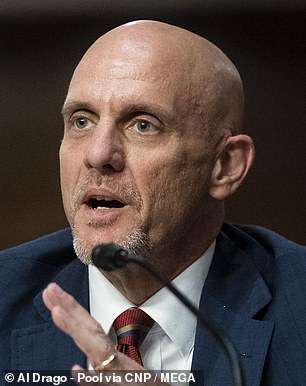 Trump told Health and Human Services Secretary Alex Azar (left) to ‘get to the bottom’ of what happened with the vaccine, while Azar said in a coronavirus taskforce meeting that the Food and Drug Administration, led by Dr. Stephen Hahn (right), was also responsible for the delay

After that, FDA Commissioner Stephen Hahn had to brief the coronavirus taskforce on the vaccine data.

A senior administration official told The Post that the meeting agenda had been approved so Hahn could walk the taskforce members through the vaccine approval process.

Hahn informed the taskforce that the timing was a result of decisions made by Pfizer.

But Azar, according to The Post’s sources, asserted – in front of coronavirus taskforce leader Vice President Mike Pence – that the FDA’s action has contributed to the delay.

By Monday night, Trump was pushing that narrative on Twitter.

‘As I have long said, @Pfizer and the others would only announce a Vaccine after the Election, because they didn’t have the courage to do it before,’ he wrote. ‘Likewise, the @US_FDA should have announced it earlier, not for political purposes, but for saving lives!’

‘The @US_FDA and the Democrats didn’t want to have me get a Vaccine WIN, prior to the election, so instead it came out five days later –  As I’ve said all along!’ Trump added.

One source who wouldn’t use their name in the story also pushed this storyline.

Pfizer ‘either knew the data and sat on it, or intentionally did not review it as originally planned, in order to push it beyond the election for political purposes,’ the White House official said.

There’s no evidence that Pfizer withheld data until after the November 3 election, which Trump lost to President-elect Joe Biden.

Trump continues to refuse to concede.

The Post found that Pfizer didn’t have access to the data to make the announcement until Sunday, November 8. An independent monitoring committee analyzed the data Sunday and then informed Pfizer’s chief executive Albert Bourla.

The company made the public announcement the next day.

‘What’s going on is they are trying to say there was collusion between FDA and Pfizer to delay this analysis of the trial data so that it wouldn’t benefit Trump in the election, and there’s no basis to that,’ another White House official told The Post.