How Joe Biden could make trouble for Boris Johnson, the leader he still has not met

By Larisa Brown and Tom Leonard for the Daily Mail

Boris Johnson will have to start any relationship with Joe Biden from scratch after it emerged he has never met the former vice-president.

The Prime Minister was left hamstrung over a ‘strict’ rule from the Biden camp about discussions with foreign leaders, sources told the Mail.

The order came after the controversy over Trump’s campaign team meeting with Russian government officials during the last presidential race.

Yet it remains to be seen just how Mr Biden and Mr Johnson will get on if he enters the White House, especially given the Prime Minister’s description of Barack Obama as ‘part-Kenyan’ with an ‘ancestral dislike’ of the British empire, and comparing Hillary Clinton, a former Democratic presidential candidate to a ‘sadistic mental health nurse’.

As a tribal Democrat, Mr Biden cannot fail to have taken such barbs to heart. Nor will he have been impressed by No 10’s wholehearted support for Brexit and its cosying up to his rival, Donald Trump.

But at heart Mr Biden is an internationalist – who knows to put global cooperation above petty party political feuds.

He will see Britain as a natural ally when it comes to issues such as renewing the US’s involvement in the Iran nuclear deal, strengthening NATO, fighting climate change, managing the rise of China and retaliating against the excesses of Russia’s president, Vladimir Putin.

Some argue, however, that Mr Biden’s deep-rooted loyalties as an Irish-American will stand in the way of any reassertion of the ‘special relationship’.

They note that when the Prime Minister announced an ‘Internal Market Bill’ which threatened to abandon provisions in the EU withdrawal agreement relating to Northern Ireland, Mr Biden tweeted: ‘Any trade deal between the US and the UK must be contingent upon a respect for the Good Friday agreement and preventing the return of a hard border. Period.’

But in the past, Mr Biden was unwavering in his support of Britain at one of the most challenging times since the end of the Second World War.

But Mr Biden – then a member of the US Senate’s Foreign Relations Committee – sponsored a resolution demanding that Washington declare itself to be on Britain’s side.

This time around, a Foreign Office source said: ‘Mr Biden’s team were pretty strict on not interacting too much with foreign leaders during the campaign.’ 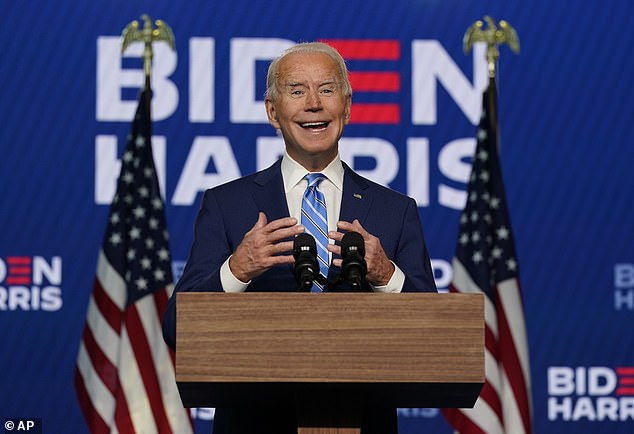 Joe Biden (pictured in Wilmington, Delaware) is an internationalist – who knows to put global cooperation above petty party political feuds 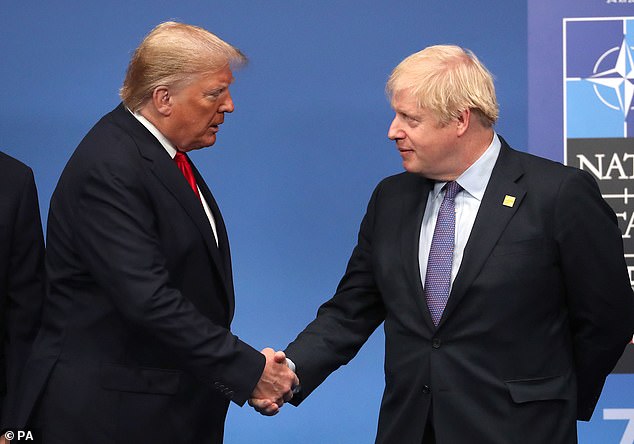 There are also concerns in Whitehall that the ‘logistics of a new administration’ could lead to delays to a trade deal between the two countries.

Trade Secretary Liz Truss has spent months in talks with key US administration figures, with negotiations currently in the fifth round after beginning in May.

The source said confirming new appointments ‘all takes time’, but did not believe Mr Biden wanted a trade deal any less than Mr Trump.

Whitehall insiders also believe there would be areas where the UK and the Biden administration could ‘collaborate closer on trade’, leading to a potentially smoother process.

Asked about Mr Trump’s premature claims of victory and voter fraud, Mr Johnson’s spokesman appeared to issue a swipe at the US President, saying: ‘It’s for the American people to decide and it’s clearly a close race.

We have full confidence in the checks and balances of the US system to produce a democratic result.’

He said the special relationship would not be affected by the outcome, adding: ‘The US is our closest ally and we are confident the relationship will go from strength to strength, whichever candidate wins the election.’