Donald Trump admitted Tuesday that he doesn’t take losing well as he rattled off a confusing message on when he expects the election winner to be known, claiming he wants to know by Election Night, but doubling down on preparing to launch a legal battle in several states over the results.

‘I’m not thinking about a concession speech or acceptance speech yet. Hopefully we’ll be doing only one of those two,’ Trump told reporters as he visited his campaign headquarters in Arlington, Virginia Tuesday afternoon as voters lined up all over the country to cast their ballots.

‘And you know, winning is easy,’ the president continued. ‘Losing is never easy. Not for me, it’s not.’

The president was joined by White House Press Secretary Kayleigh McEnany, his Chief of Staff Mark Meadows and a very dressed-down Jared Kushner, his son-in-law and senior adviser, for the trip.

Reports emerged over the weekend that Trump is preparing to declare victory Tuesday night before a winner is officially called – but the president denied this, claiming the reports were ‘false.’

President Donald Trump sent mixed-messaging on when he feels the winner of the election will be known as he told a room full of his staffers at his Arlington, Virginia campaign headquarters: ‘Losing is never easy. Not for me, it’s not’ 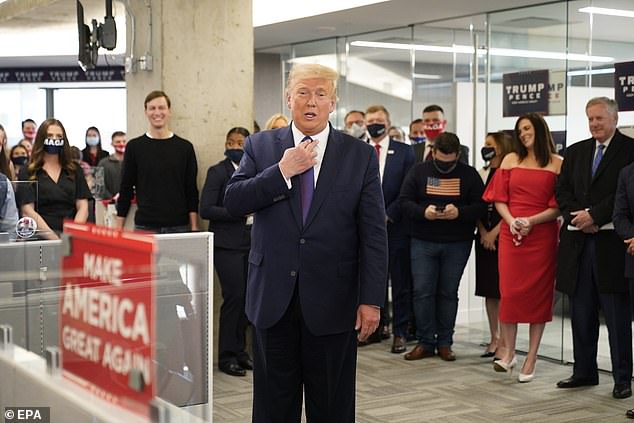 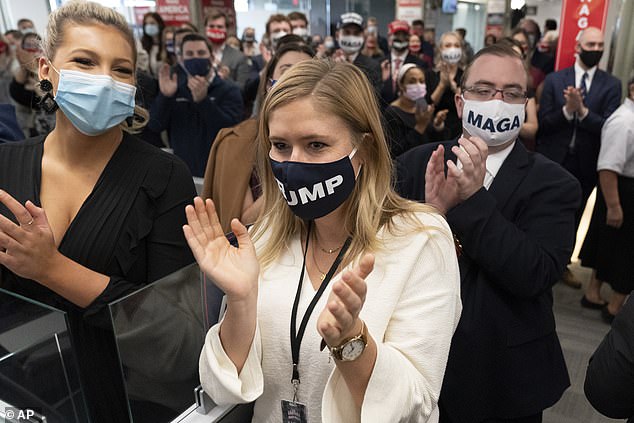 Trump took a drive over the border of D.C. and Virginia on Election Day to visit with his campaign staffers at the headquarters in Arlington, VA 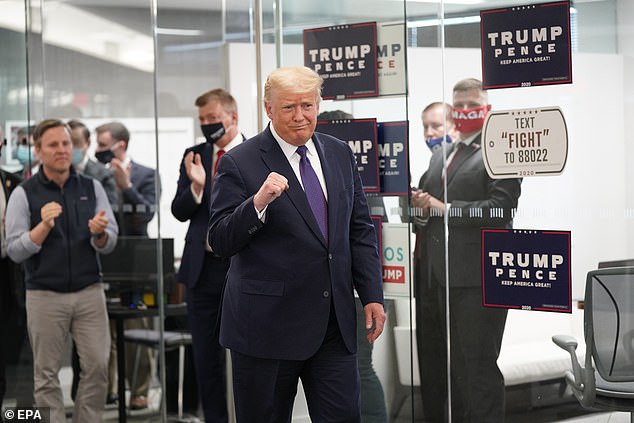 ‘You have to have a date, and the date happens to be November 3,’ Trump said. ‘And we should be entitled to know who won on November 3’ 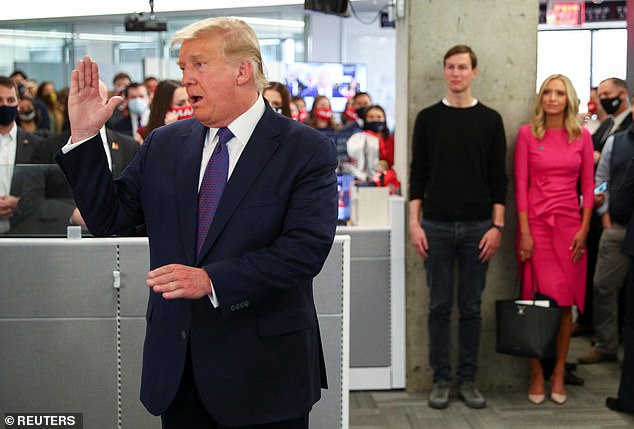 Trump was joined by White House Press Secretary Kayleigh McEnany (right) and his son-in-law and Senior Advisor, a very dressed-down, Jared Kushner (center) – his Chief of Staff Mark Meadows (not pictured) was also in tow

Trump told ‘Fox & Friends’ in a call-in interview Tuesday morning that he would declare victory ‘only when there’s victory.’

During his visit to the Washington D.C. suburb, which aired live on TV, Trump told a room of his staffers that the winner of the election should be decided Tuesday, again railing against mail-in ballots.

‘When do you think we’ll know a winner and should every vote be counted no matter how long it takes?’ a reporter gathered for the quick trip across the line from D.C. asked the president.

‘Well I think you will know possibly tonight depending on the extent of a victory. I think you could know tonight,’ Trump said.

‘I think the ruling on Pennsylvania was an unfortunate one by the Supreme Court because I think we should know what happens on the night,’ he said. ‘Let people put their ballots in earlier. But you have to have numbers, you can have these things delayed for many days and maybe weeks. You can’t do that. The whole world is waiting, this country is waiting – but the whole world is waiting.’

‘You have to have a date, and the date happens to be November 3,’ Trump reiterated. ‘And we should be entitled to know who won on November 3.’

The president is particularly upset with the swing state Pennsylvania, which could decide the outcome of the election.

The Supreme Court ruled in favor of Democrats in Pennsylvania who put in a new guideline due to an influx of mail-in ballots this year allowing the state election board to count those votes that were received up to three days after Election Day.

Trump says this is just a cover for Democrats to try and ‘steal’ the election by committing fraud. 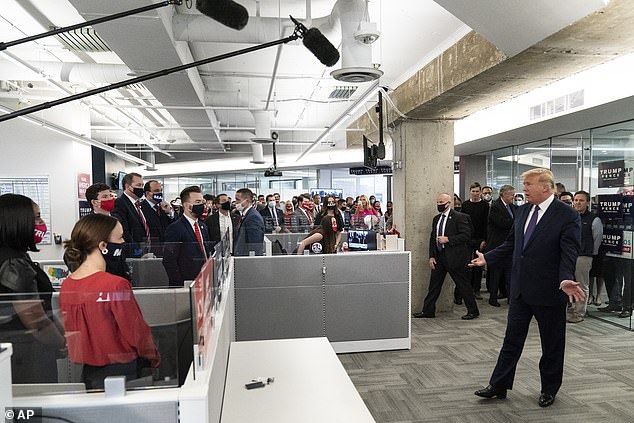 The president, however, reiterated that he intends to launch legal battles against states that accept and count ballots days after Election Day

The court also ruled that North Carolina, another swing state – a bit less consequential than the Keystone State – has up to eight days after the election to collect and count ballots as long as they were postmarked by Tuesday, November 3.

‘And a lot of shenanigans, a lot of bad things happen with ballots when you say, ‘Oh let’s devote days and days and all of a sudden, the ballot count changes.’

Trump has continuously flip-flopped on how the rest of the election should move forward, claiming he wants results known on Election Night, but promising to launch legal battles that could hold up the results.