The United States looked to nuclear strikes on China in 1958 to protect Taiwan from an invasion by Communist forces, classified documents reveal.

Military leaders also assumed that the Soviet Union would aid China and retaliate with nuclear weapons -a price they deemed worth paying to protect Taiwan, according to the document, first reported by The New York Times.

The documents were posted online by Daniel Ellsberg. The now 90-year-old is famous for his 1971 leak to US media of the Pentagon Papers, a top-secret study on the Vietnam war.

Ellsberg told the Times he copied the top-secret Taiwan crisis study in the early 1970s, and is releasing it as tensions mount between the United States and China over Taiwan.

Former military analyst Ellsberg said: ‘As the possibility of another nuclear crisis over Taiwan is being bandied about this very year, it seems very timely to me to encourage the public, Congress and the executive branch to pay attention to what I make available to them.’

He posted online the classified portion of a top-secret document on the crisis that had been only partially declassified in 1975.

Daniel Ellsberg – seen here in 2019 – is best known for his leak of the so-called Pentagon Papers in 1971. Ellsberg told the Times he copied the top-secret Taiwan crisis study in the early 1970s, and is releasing it as tensions mount between the United States and China over Taiwan 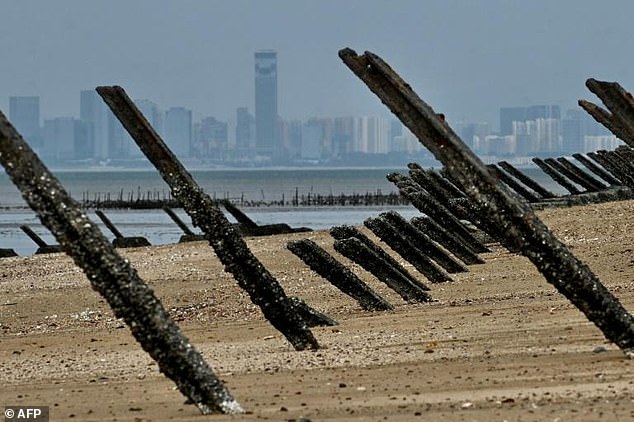 Spikes placed on the coast of Taiwan’s Kinmen islands – located just two miles from mainland China – to help prevent a military invasion. The United States looked to nuclear strikes on China in 1958 to protect Taiwan from an invasion by Communist forces, classified documents reveal

Had an invasion taken place, General Nathan Twining, the chairman of the Joint Chiefs of Staff at the time, ‘made it clear that the United States would have used nuclear weapons against Chinese air bases to prevent a successful air interdiction campaign,’ the document’s authors wrote.

If this did not stop an invasion, then there was ‘no alternative but to conduct nuclear strikes deep into China as far north as Shanghai,’ the document said, paraphrasing Twining. 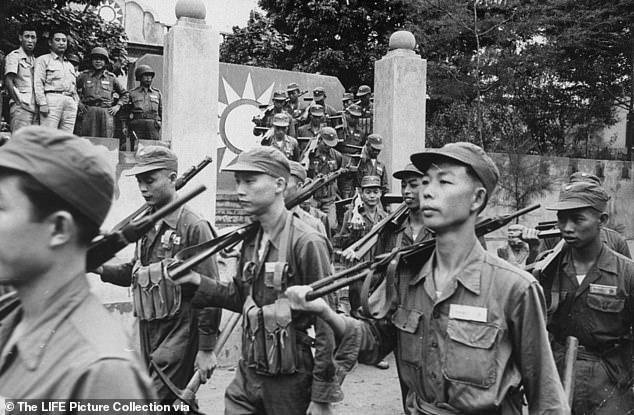 Nationalist Chinese soldiers on Quemoy Island in 1958. Ellsberg told the Times he copied the top-secret Taiwan crisis study in the early 1970s, and is releasing it as tensions mount between the United States and China over Taiwan 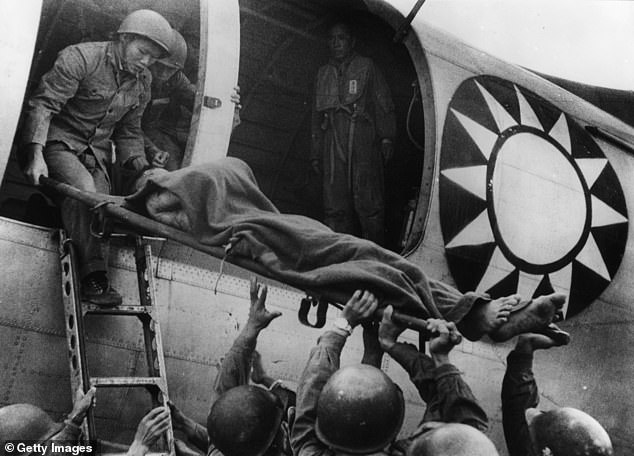 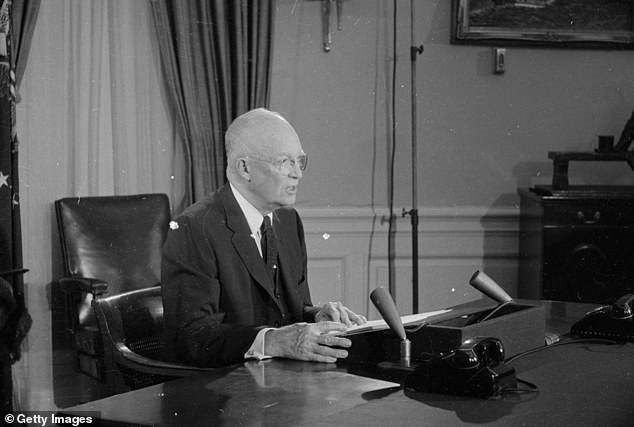 Dwight D Eisenhower, addressing the nation on American intervention in Taiwan in 1958

In the event, US president Dwight D. Eisenhower pushed back against leaders including Gen. Laurence S. Kutner, secretary of state, John Foster Dulles and Twining and decided to rely initially on conventional weapons.

But there was ‘unanimous belief that this would have to be quickly followed by nuclear strikes unless the Chinese Communists called off this operation.’

Yale University historian Odd Arne Westad told the Times: ‘This confirms, to me at least, that we came closer to the United States using nuclear weapons [in 1958] than what I thought before.’

In the context of today’s escalating tensions Westad said the documents should be ‘sobering for everyone involved’. 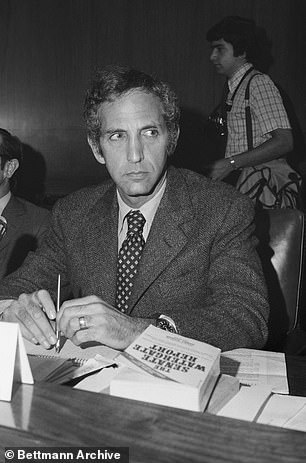 Daniel Ellsberg. He told the Times using the Espionage  act ‘to criminalize classified truth-telling in the public interest’ is unconstitutional

The 1958 crisis ended when Communist forces halted artillery strikes on islands controlled by Taiwan, leaving the area under the control of Nationalist forces under Chiang Kai-shek.

China considers Taiwan to be a rebel province that will one day return to the mainland’s fold, by force if necessary.

Washington has recognized Beijing since 1979, but maintains relations with Taipei and is its most important military ally.

The United States also frequently conducts what it calls ‘freedom of navigation’ operations in the flashpoint Taiwan Strait waterway.

President Joe Biden is expected to announce his strategy toward China soon, and calls are growing for him to make a clear public commitment to defend Taiwan militarily.

A US law requires Washington to help the island defend itself in the event of a conflict, but America has pursued a policy of ‘strategic ambiguity’ for decades, refraining from clearly stating what circumstances would lead it to intervene militarily on Taiwan’s behalf. 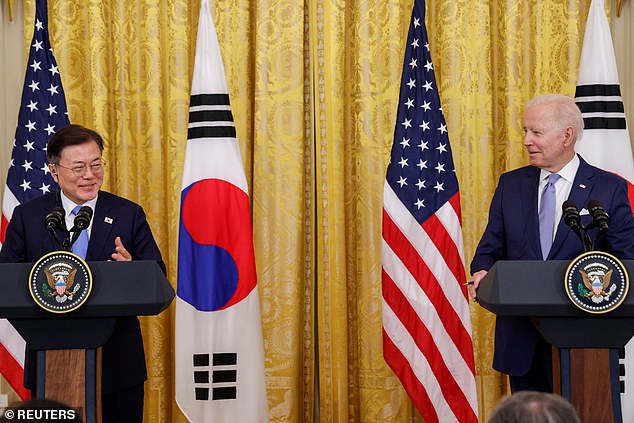 President Joe Biden and South Korea’s President Moon Jae-in react during a joint news conference after a day of meetings at the White House, in Washington on Friday 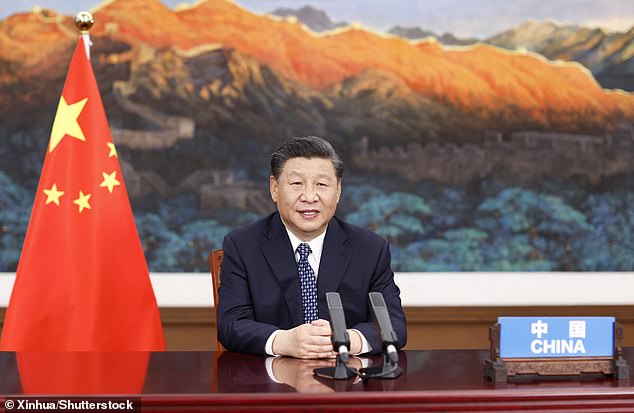 Chinese President Xi Jinping. He and his party want Taiwan to become part of Communist China again – by force, if necessary

The US and South Korea will work together more closely to safeguard peace and stability in the Taiwan Strait, South Korean President Moon Jae-in said on Friday after a meeting with Biden.

‘As for peace and stability in the Taiwan Strait, we agreed how important that region is, especially considering the special characteristics between China and Taiwan,’ Moon told reporters at a joint news conference with Biden.

‘We just decided to work more closely on this matter going forward.’

Ellsberg told the Times that he now hopes to be prosecuted under the Espionage Act, adding: ‘I will, if indicted, be asserting my belief that what I am doing — like what I’ve done in the past — is not criminal.’

He said using the act ‘to criminalize classified truth-telling in the public interest’ is unconstitutional.