A US healthcare company has revealed the world’s first glucose sport biosensor, which takes blood sugar readings and displays the results on a smartphone.

The ‘Libre Sense’ device, developed by Illinois-based firm Abbott, is a round white biosensor, about the size of a £2 coin, that attaches to the back of the upper arm.

Upon application, it inserts a tiny 0.2-inch filament just under the skin, held in place with a small adhesive pad, to provide continual blood readings.

Application and removal of the sensor, which is set to start shipping this December, is pain-free, the company says.

Wearers automatically receive real-time glucose data, streamed every minute to an associated app via Bluetooth, when they tap their phone against the sensor.

The eerie Black Mirror-esque device is just like ‘having a molecular laboratory on your arm’ and provides a ‘window into your body’.

The biosensor is applied to the back of the upper arm with a simple, disposable product called an applicator

Abbott is aiming to help athletes track the connection between blood sugar levels and performance with continual updates.

Tracking and understanding glucose levels enable athletes to refuel appropriately with sugar boosts during their workout.

Libre Sense is based on Abbott’s glucose monitoring technology FreeStyle Libre, which was originally developed for people living with diabetes.

This is the first personal-use product based on FreeStyle Libre sensing technology that allows for use beyond diabetes, Abbott claims.

‘Our breakthrough sensing technology has the potential to go beyond glucose and provide a lens into what’s happening in the human body,’ said Jared Watkin, senior vice president for diabetes care at Abbott.

‘This could provide meaningful insights into other conditions, treatments and ultimately improve health.’

Libre Sense, which needs to be replaced after 14 days, can be worn while cycling, running, exercising, swimming, bathing and showering.

Abbott stressed that that Libre Sense is solely for sports use and is not intended to be used to diagnose or treat diseases. 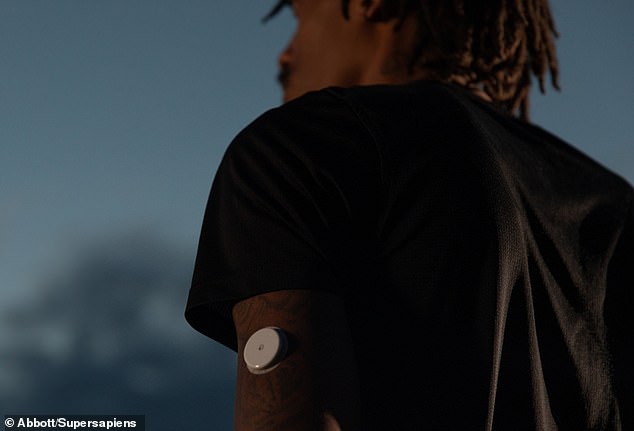 Application and removal of the sensor is pain-free. It has a thin, flexible filament that’s inserted under the skin to accurately measure glucose levels inside the body from the interstitial fluid – a thin layer of fluid surrounding the cells of the tissues just below the skin

The device has been tested to withstand immersion in up to 3 feet (one metre) of water for up to 30 minutes.

It’s attached to the back of the arm using a disposable product called an applicator, which creates a small puncture.

According to Abbott, application was generally, if not unanimously, thought to be pain-free in tests.

The firm found that 91.6 per cent of 119 users surveyed agreed that it was painless when applied to their arm.

A thin, flexible filament is then inserted under the skin to accurately measure glucose levels inside the body from the interstitial fluid – a thin layer of fluid surrounding the cells of the tissues just below the skin.

To take glucose readings, users scan the biosensor with an app on their smartphone.

After that, users will start to receive a stream of glucose data via Bluetooth every minute on the app.

Different sports technology companies are creating their own apps to work with the device, including Atlanta-based Supersapiens, which has partnered with teams at the Tour de France. 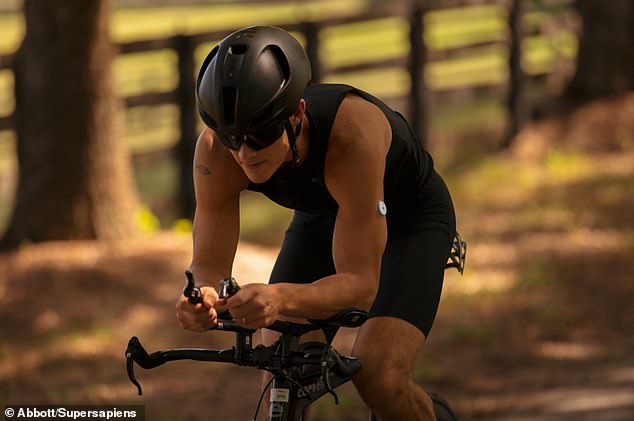 The device can be used while running, cycling and general exercise and has been tested to withstand immersion in up to 3 feet of water for up to 30 minutes

‘With Abbott’s Libre Sense, for the first time, an athlete will have access to glucose data to help give them insight into their body’s fuel level at all times, fundamentally changing the way athletes think about energy management,’ said Phil Southerland, founder of Supersapiens and former professional cyclist.

‘By combining Abbott’s proven track record in glucose sensing technology, along with Supersapiens’ app and personalised analytics, athletes will be primed to sustain peak performance.’

Supersapiens app for the device will be available to download for free from the Apple App Store and Google Play from December.

This coincides with shipping dates for the device itself, which is available to pre-order only on the Supersapiens website.

WHY IS IT IMPORTANT TO CONTROL BLOOD SUGAR LEVELS?

Hyperglycemia can cause significant damage to some organs, which then leads to complications of diabetes. These include:

– cardiac or vascular event, such as myocardial infarction (heart attack) or stroke;

– kidney problems that may require dialysis

– eye problems, which may lead to loss of vision

– sexual issues, such as erectile dysfunction

– problems with circulation and scarring, which can lead to amputation

To avoid the complications of diabetes, blood glucose must be under control to minimise the risk of hyperglycemia.

This helps to prevent the complications of diabetes.

It helps reveal see the impact of the measures being taken to better control diabetes, including:

– changes made to your diet

When a blood-glucose meter indicates that your levels are too high, required measures can bring it back to normal right away.

This can involve modifying diet (for example, avoiding certain foods) or increasing medicine.

When glucose levels are too high, speak to a pharmacist or health professional.