Brooklyn Beckham’s father-in-law Nelson Peltz wins seat on board of Unilever… Is a break-up on the cards after years of share price decline?

Unilever shares soared after activist investor Nelson Peltz joined the board of the consumer goods giant.

The FTSE 100 firm, which makes Ben and Jerry’s ice cream, Marmite and Dove soap, said the billionaire will become a non-executive director having built up a 1.5 per cent stake through his investment vehicle Trian Fund Management.

The elevation of the 79-year-old to the board followed meetings with Unilever chief executive Alan Jope and chairman Nils Andersen.

Billion-dollar bride: Peltz and his daughter at her £3m wedding

Shares jumped 9.4 per cent, or 329.5p, to 3825p on the news, as analysts said Peltz could help to turn Unilever’s fortunes around.

Investors are hoping he will use his position on the board to spearhead a turnaround similar to those he helped oversee at other consumer goods giants including Gillette owner Procter & Gamble.

Analysts said he could push for the group to sell struggling brands to focus on faster-growing businesses, and increase its focus on more profitable sectors.

Unilever shares have fallen 15 per cent since Jope took the top job in January 2019, significantly lagging the FTSE 100 which is up 13 per cent in the same period.

Its value headed back towards £100billion again yesterday, closing at £95.1billion, valuing Peltz’s stake at around £1.42billion.

Peltz said he was ‘delighted’ to be joining the board and that Trian had made ‘a considerable investment in Unilever’.

He said: ‘We believe it is a company with significant potential, through leveraging its portfolio of strong consumer brands and its geographical footprint.’

Peltz is worth £1.3bn – and look who’s just joined the family…

Nelson Peltz is one of America’s richest men – and Brooklyn Beckham’s father-in-law.

The 79-year-old – who has a fortune of £1.3billion – walked daughter Nicola down the aisle in April at her £3million star-studded wedding to David and Victoria Beckham’s eldest son. 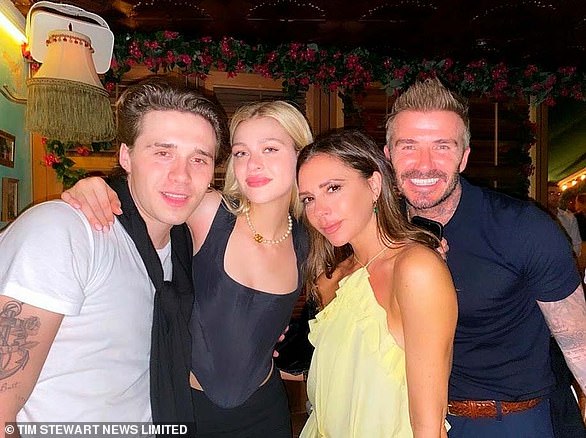 Brooklyn and Nicola with Posh and Beck

The ceremony packed with A-listers at Peltz’s £79million estate in Palm Beach, Florida, was a far cry from the activist investor’s roots.

He was born in 1942 in Brooklyn, New York, and dropped out of the prestigious Wharton School at University of Pennsylvania.

He earned a fearsome reputation as a tough-minded businessman, building his family’s frozen food business into the biggest frozen food distributor in America’s north-east.

After running Triangle Industries, the biggest packaging firm in the world, he earned around £535million from its sale in 1989. He founded Trian Fund Management in 2005.

Married three times and a father of ten, he is a friend of fellow New Yorker Donald Trump. But he distanced himself from the former president after the US Capitol riots last year.

Andersen said: ‘Peltz’s experience in the global consumer goods industry will be of value to Unilever as we continue to drive the performance of our business.’

His stake was first revealed in January amid a series of dramatic setbacks for the Dutch consumer goods giant. And Peltz’s emergence piled further pressure on Jope after an embarrassing U-turn saw him pull out of an audacious £50billion takeover bid for GlaxoSmithKline’s consumer arm.

Jope’s repeated attempts to buy the GSK business – which is being spun off into a separate company named Haleon next month – were slammed by investors and analysts and sent Unilever’s share price tumbling.

Another investor Terry Smith, who owns 0.8pc of Unilever through his firm Fundsmith, called the saga a ‘near death experience’.

He said bosses needed to focus on fixing Unilever’s flagging business before looking to buy others.

And it came after an earlier row with Smith who publicly blasted Jope over Unilever’s obsessive focus on ‘woke’ issues.

He lashed out at Unilever for being ‘obsessed’ with its sustainability credentials. Smith said that Unilever had ‘lost the plot’ by trying to define ‘the purpose’ of some of its brands like Hellmann’s mayonnaise.

Following the setbacks, Unilever kicked off a process to streamline its sprawling business that will see it cut jobs and simplify its structure into five units.

It has also consolidated its headquarters in London to cut costs and last year offloaded its slow-growing Lipton tea business.

Peltz is renowned for pushing strategic and governance changes at companies he is involved in. His firm Trian was responsible for an overhaul at Cadbury that saw it spin off its drinks business Schweppes before it was bought by US giant Kraft.

Peltz also spearheaded an overhaul after taking a stake in P&G and joining its board.

He criticised its ageing brands and a ‘suffocating bureaucracy’ leading to poor shareholder returns. Shares have soared since he invested in the business.

Is a break-up on the cards after years of share price decline?

Nelson Peltz’s appointment to the board of Unilever sparked speculation over the future of the company.

After years of share price decline and a series of setbacks, analysts said the activist investor was likely to use his position to push for a shake-up of the consumer goods business.

The 79-year-old New Yorker – who will take up his position as a non-executive director and a member of the Unilever compensation committee next month – could even call for Unilever to be broken up, experts suggested.

Bernstein analyst Bruno Monteyne said Peltz has a ‘very strong record’ and ‘huge credibility’ thanks to his involvement with other firms in the sector including Cadbury and Procter & Gamble.

He said he did not expect Unilever to ditch its focus on ‘woke’ issues despite criticism from other shareholders including Terry Smith, who said chief executive Alan Jope has ‘lost the plot’.

But Monteyne said: ‘I would expect more energy behind executing and improving their strategy. I would also expect more board and management changes.’

He said Peltz could help Unilever improve its incentive scheme for bosses, boost investment in innovation and branding and buy ‘more interesting’ assets while selling off bad businesses.

He also said Peltz could oversee the sale of entire divisions. ‘One thing Peltz proposed at P&G, but that was not executed, was to split the company into independent business units,’ he said. ‘I think that idea will come back for Unilever. They may simply be too big to turn around, and breaking them up may improve agility.’

UBS analyst Guillaume Delmas also said Peltz’s arrival raised the prospect of sales and takeovers, including a separate listing for its food and refreshments business, which includes Ben & Jerry’s. He said Peltz’s presence would ‘prompt Unilever’ to better spell out its strategy and long-term vision. Delmas added that Trian could spell out a plan as early as July 26, just six days after Peltz’s appointment is expected to be approved.

Jefferies analyst Martin Deboo said in January: ‘Trian has a long and successful track record of unlocking value. This has frequently centred on splits and spin-outs.’

Morgan Stanley analysts cast doubt on there being a ‘quick turnaround’ at Unilever, but said Peltz’s appointment would boost shares.

They said Trian’s involvement comes at a ‘particularly challenging’ time for Unilever and investors would be focused on three areas. They included increasing its focus on better performing brands, better targeting its investment spending and ‘careful portfolio management’.