US and UK flags are projected onto Switzerland’s Matterhorn to send a message of hope during coronavirus pandemic – along with the slogan ‘Dream Now, Travel later’

The American flag has been projected onto the Matterhorn mountain in the Swiss Alps as part of a breathtaking light illumination series spreading ‘hope and strength’ amid the coronavirus pandemic.

Renowned Swiss light artist Gerry Hofstetter, 58, has been lighting up the 14,690 ft mountain with spectacular displays of country flags and messages of hope since March 24.

And the US stars and stripes were emblazoned onto the jagged mountain on Thursday night, which stands alone on the horizon amid the border between Switzerland and Italy.

A statement from the Zermatt tourism website said ‘May our message convey solidarity and give you hope and strength. We look forward to meeting again at the foot of the Matterhorn, we are all in this together’ as the flag was shone on April 16 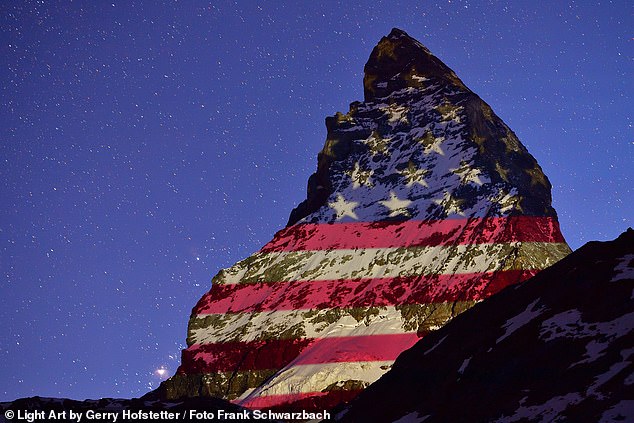 In a bid to stop members of the public flocking to the mountain under federal stay-at-home measures, webcams from around the Matterhorn livestream the illuminations for people to enjoy at home

A statement issued by tourist site Zermatt Matterhorn said:  ‘As it stands, the USA, is the country that has been most impacted by the COVID-19 crisis with the highest number of confirmed cases.

‘Our thoughts are with all American people at this unprecedented time.

‘May our message convey solidarity and give you hope and strength. We look forward to meeting again at the foot of the Matterhorn, we are all in this together.’

The Embassy of Switzerland in the United States tweeted an image of the American flag projection alongside the caption: ‘INCREDIBLE! As a sign of solidarity, the American flag was projected onto the Matterhorn last night.

‘Switzerland is sending hope and strength to the United States of America.’

The UK flag was also projected on the mountain on April 10. A statement at the time said that Zermatt was ‘deeply connected’ to the UK with British mountaineers having first brought tourism to the area. 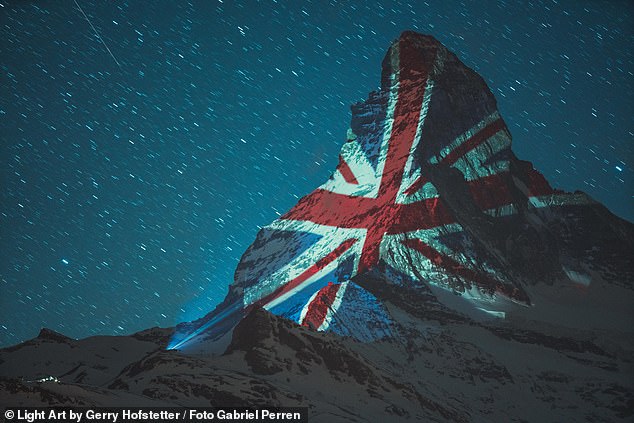 British mountaineers first brought tourism to Zermatt, with tourism website describing how the area is ‘deeply connected’ to the UK through its history 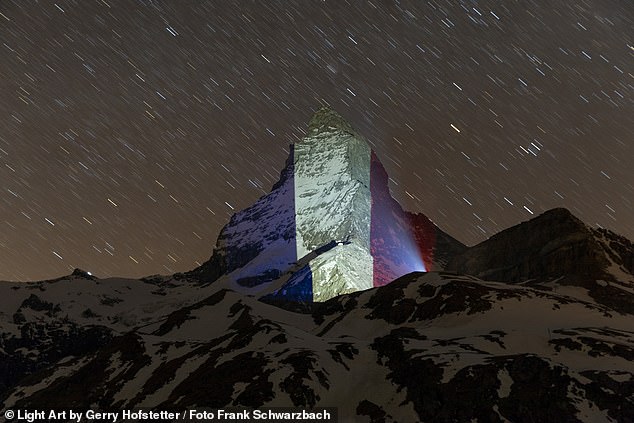 On April 9 the Matterhorn was emblazoned with the French flag, designed to offer ‘hope in these unprecedented times’ 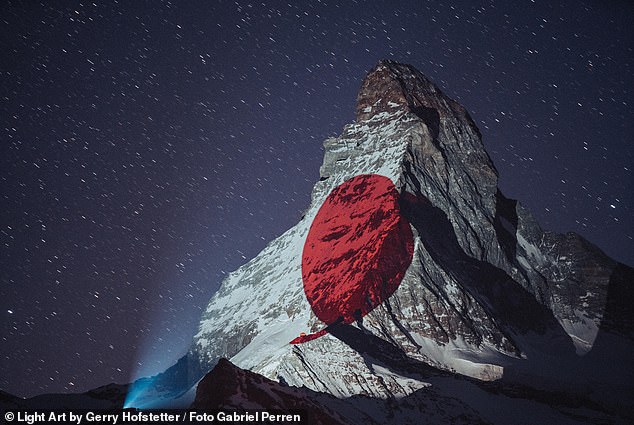 The Japanese flag illuminated the mountain on April 15, with the tourist website saying ‘We greet our Japanese friends, partners and guests and send them a sign of hope and strength to overcome this unusual and difficult time’ 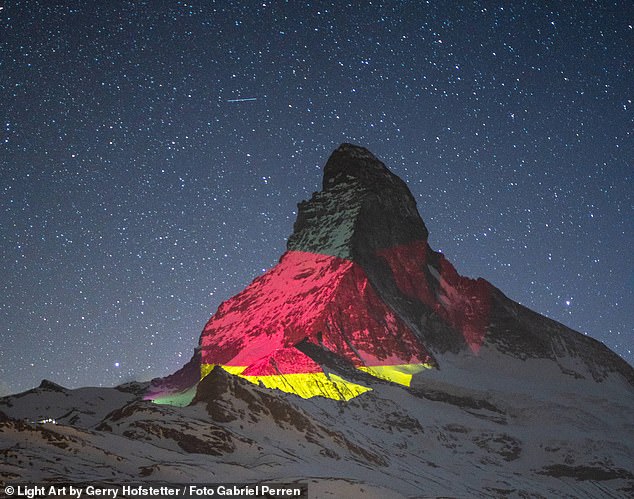 The German flag was projected on April 14. A statement said: ‘With the German flag on the Matterhorn, the Swiss symbolic mountain, we send a sign of solidarity across the currently closed borders and look forward to the time when mutual visits are once again possible’ 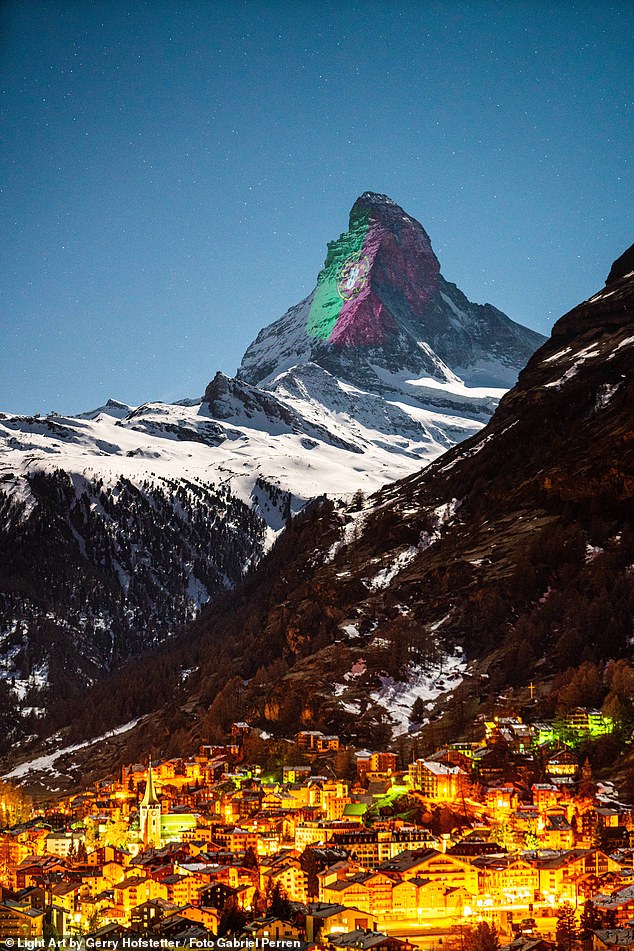 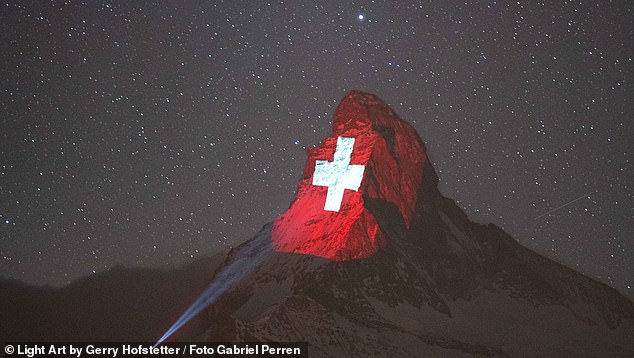 The projector can be seen illuminating the mountain with the Swiss flag, above 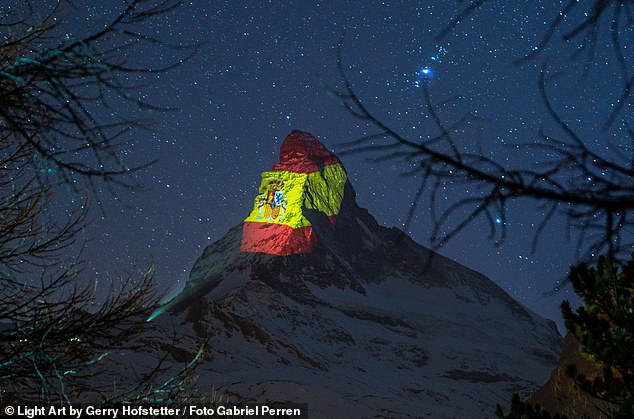 The first image that illuminated the mountain on March 24 simply read ‘#Hope’ in striking white letters against a red backdrop.

Hofstetter has also projected the flags of Japan, Germany, Spain, France and Italy — as well as textual messages including ‘#StayAtHome’ and #AllOfUs — onto the Matterhorn.

Other slogans projected on the mountain include the phrase ‘Dream now – travel later’ because, as the website says although travel is banned, ‘dreaming is not prohibited’.

In a bid to stop members of the public flocking to the mountain under federal stay-at-home measures, webcams from around the Matterhorn livestream the illuminations for people to enjoy at home.