The US and Team GB women’s football teams were among those to take the knee ahead of their opening matches in the Olympics today.

All 22 players took part in the gesture prior to kick-off between four-time Olympic champions the US and Sweden in Tokyo, an hour after Team GB and Chile did likewise in Sapporo.

The International Olympic Committee (IOC) recently relaxed the rules for protests at the Games, softening a long-standing ban on political protests at the global sporting event.

Athletes will now be allowed to take a knee before play begins to highlight racial injustice, speak to the media and post online about their views, or wear clothing with a protest slogan at a press conference.

But political statements during events, victory ceremonies and at the Olympic Village are still off the cards, the IOC said.

‘For us it really feels right to stand up for human rights,’ Swedish defender Amanda Ilestedt told reporters after her team’s 3-0 victory.

‘It was a communication with the U.S. team before, so for us it feels good to do that and it is something we stand for as a team.’

For Team GB captain Steph Houghton it was important to follow through with a promise made before the Games.

‘Taking the knee was something we spoke about as a group. We feel so strongly and we want to show we’re united,’ she said.

‘We want to fight all forms of discrimination and as a group of women we wanted to kneel against it.

‘It was a proud moment because the Chile players took the knee too to show how united we are as sport.’ 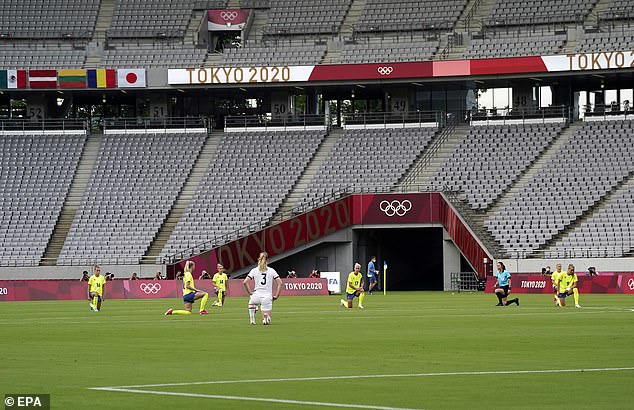 New Zealand also took the knee in their match against Australia at the Tokyo Stadium while their opponents did not.

However, the Australia players held the country’s indigenous flag when they posed for their pre-game team photo.

Taking the knee, which has become widely used in the Premier League since the Black Lives Matter protests last year, proved controversial in the Euro 2020 tournament with some fans booing the gesture.

Black players in the England men’s team were subjected to a storm of online racist abuse this month after their final defeat, drawing widespread condemnation from the squad’s captain, manager, royalty, religious leaders and politicians.

But the women’s players at the Olympics did not have to contend with fan backlash as they were playing in front of empty stadiums. 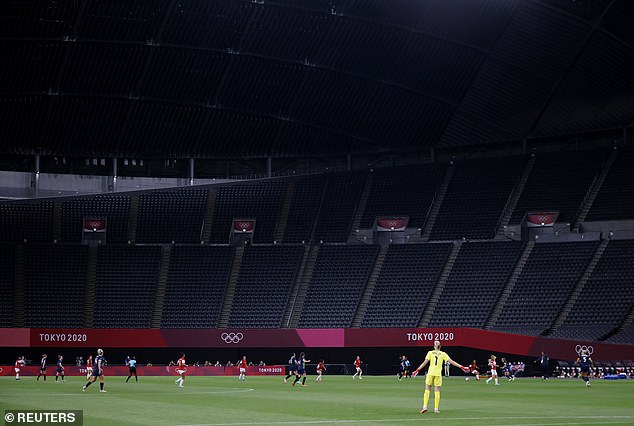 Team GB won the Group E opener in Sapporo 2-0, with Manchester City striker Ellen White scoring twice and having a goal disallowed by VAR for offside.

Hege Riise’s side are bidding to become the first British team to win an Olympic football medal.

Lauren Hemp’s header put the ball in front of Ellen White for a close-in goal in the 18th minute. White’s second goal was a volley to the far post in the 75th.

Chile, ranked No. 37 in the world, was making its Olympic debut. Known as La Roja, Chile qualified for Tokyo by beating Cameroon 2-1 in an intercontinental playoff.

Meanwhile Sweden pulled off a shock result, beating favourites the US by 3-0.