See the wilder side of the urban world.

That’s the promise made by fascinating new brightly illustrated book Wild Cities, written by Ben Lerwill, which takes readers on a global tour of 14 cities and reveals the incredible creatures that live in them.

From harbour seals in London to wild boars in Berlin and from cougars in Chicago to bull sharks in Sydney, the book is crammed with astonishing stories and facts about the animals that have adapted to live in our big cities. Here MailOnline Travel takes you on a tour of our pick of the menagerie.

The London wildlife line-up includes red and fallow deer, many of which live in Richmond Park (pictured) 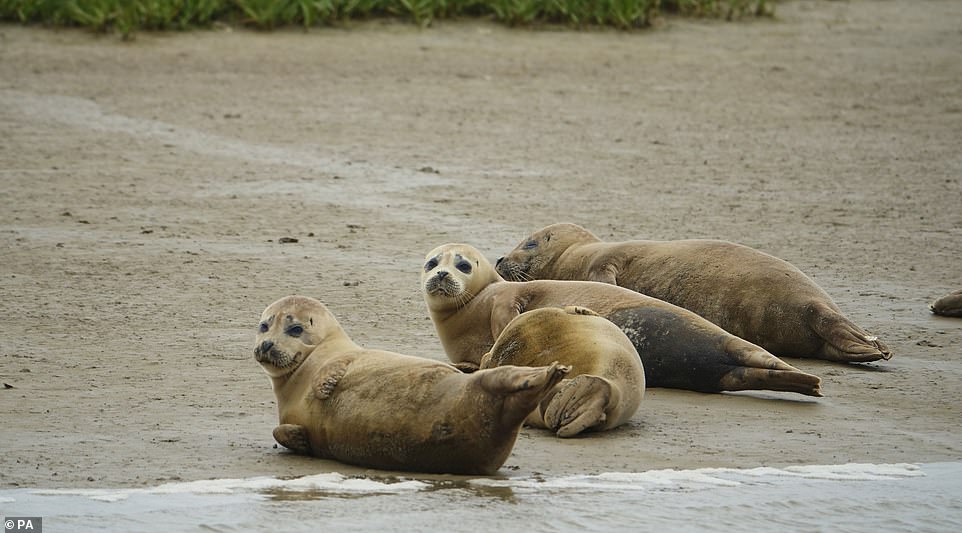 Harbour seals pictured in the Thames Estuary. They have been spotted near Canary Wharf on occasions 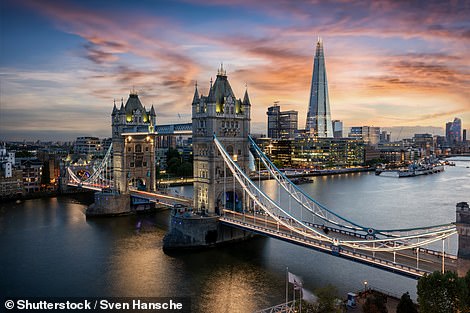 The UK’s capital is home to eight million people – and, Wild Cities points out, around half a million mice known as ‘Tube mice’.

They forage for food around the tracks, the book says, and have to put up with trains thundering over their heads every few minutes.

The London Underground is also home to ‘rare mosquitoes‘ and rats.

The latter face a cunning enemy above ground – urban foxes, which were first spotted in the 1930s and have now well and truly adapted to life in the Big Smoke.

And the pigeons face an enemy from above in London, too – the peregrine falcon, which is capable of swooping down at almost 200mph to make a kill.

Meanwhile, in the River Thames, which the book points out was declared ‘biologically dead’ in 1957, harbour seals can be spotted near Canary Wharf and dolphins and porpoises near the city centre.

The London wildlife line-up also includes red and fallow deer, many of which live in Richmond Park, thousands of parakeets (how they arrived is something of a mystery) and stag beetles (scary-looking but harmless). 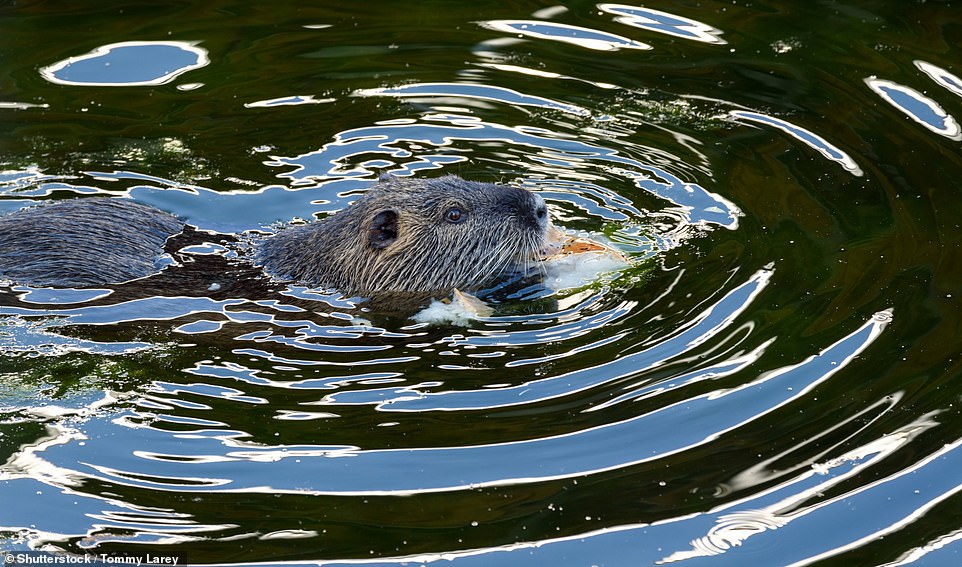 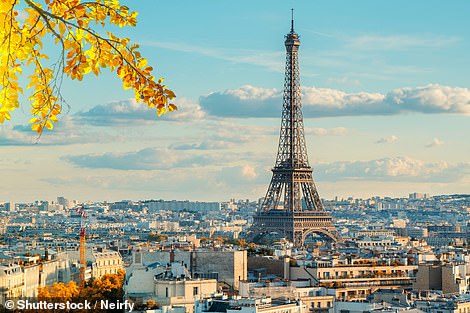 Kestrels, herons and catfish all live in Paris

Pigeons. They’re everywhere in Paris. As in lots of cities. But look up and you might see something more exotic – kestrels.

Wild Cities says that they have learned to make nests at the top of some of the city’s tallest buildings and churches.

In the city’s waterways, there is also plenty of wildlife action. There are grey herons, beaver-like river mammals called coypus – introduced via the fur trade over 100 years ago – and the Seine is home to the weighty wels catfish. 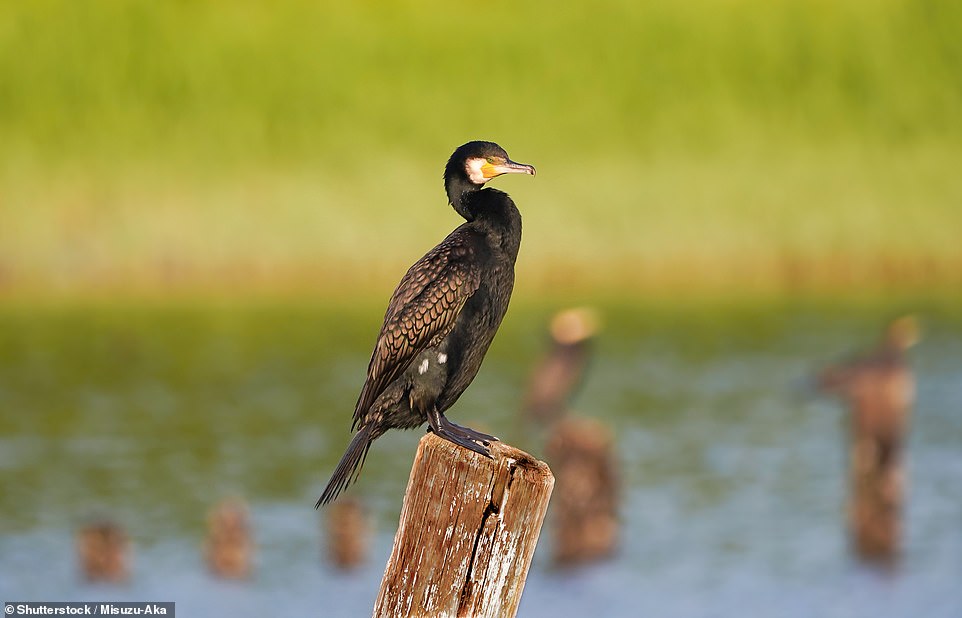 A great cormorant takes a breather in Tokyo Bay. The city is also home to kingfishers and cunning jungle crows 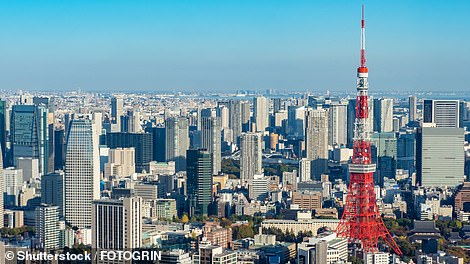 Urban zoo: Tokyo is home to a surprising number of animals

Jungle crows can be found in Tokyo and are ‘experts at city living’, says Wild Cities.

It says: ‘They know which restaurants to wait outside for the tastiest rubbish… and distract pet dogs, then eat their food.’

Great cormorants can also be spotted, near the city port, along with kingfishers in and around ponds and streams and cat-like masked palm civets creeping along balconies and power lines in search of food. 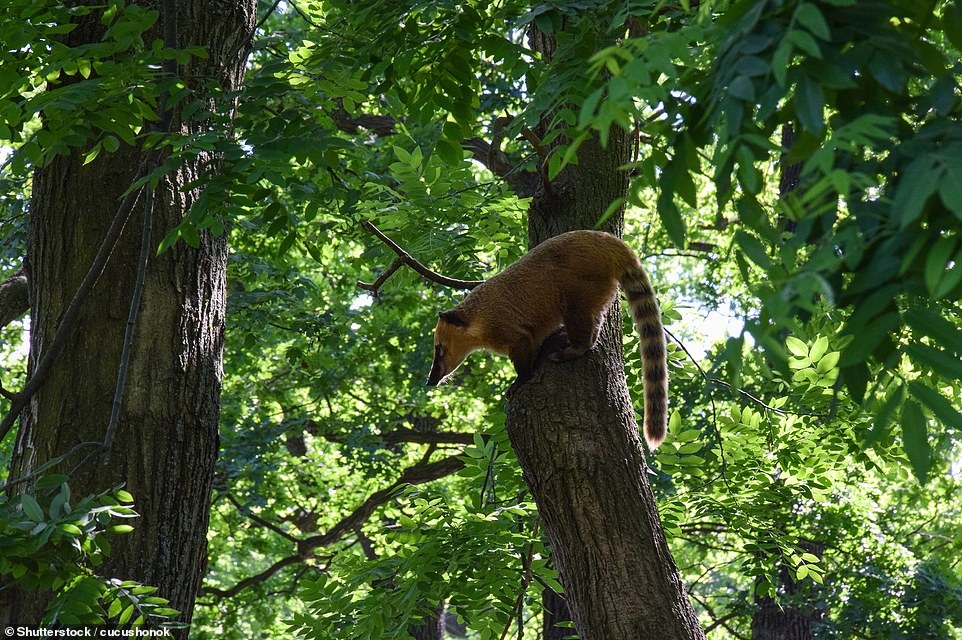 There are a million raccoons in Germany – and several thousand in Berlin, where this one was snapped 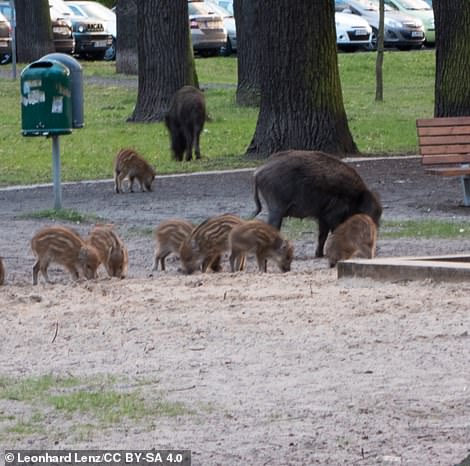 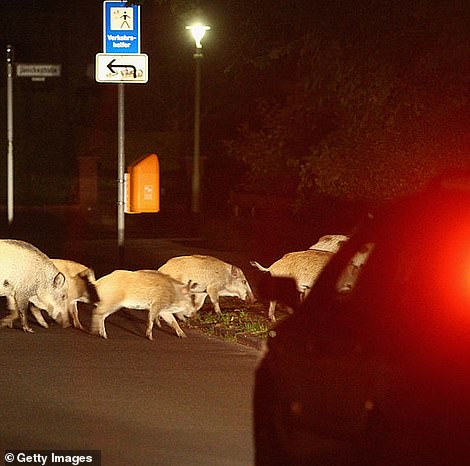 Boar-lin: On the left, wild boars forage in a playground in the Berlin suburb of Hakenfelde (this image is courtesy of Wikimedia Commons licensing). On the right, a car slows down in Berlin to let some boars cross the road 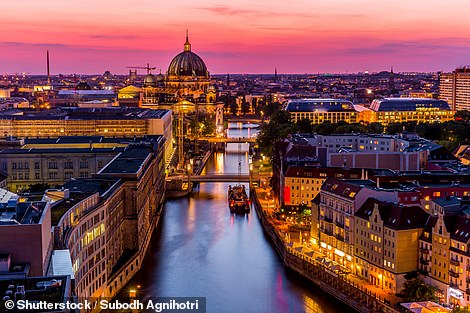 Berlin is home to Goshawks, which prey on p

Goshawks are silent killers, says Wild Cities, ‘flying hard and fast at their prey’ – and Berlin ‘has more of these majestic birds than any other city in the world’.

They often target pigeons and crows mid-air and can sometimes be spotted at Tempelhofer Feld, Berlin’s ex main airport that has now been repurposed as a park.

So what’s going on animal-wise at ground level in the German capital? Plenty.

Wild Cities points out that the city is home to ‘several thousand snuffling, rough-haired wild boars… often trotting on to the streets to seek out food’.

There is also a similar number of raccoons.

While this may seem improbable, as they’re native to North America, Wild Cities has the explanation: ‘It used to be fashionable to wear raccoon fur coats, so German fur farmers started to buy raccoons.

‘A few were released to be hunted – but then in 1945 a wartime bomb fell on one of the fur farms, and more raccoons escaped into the woods. Nowadays there are nearly a million in Germany.’ 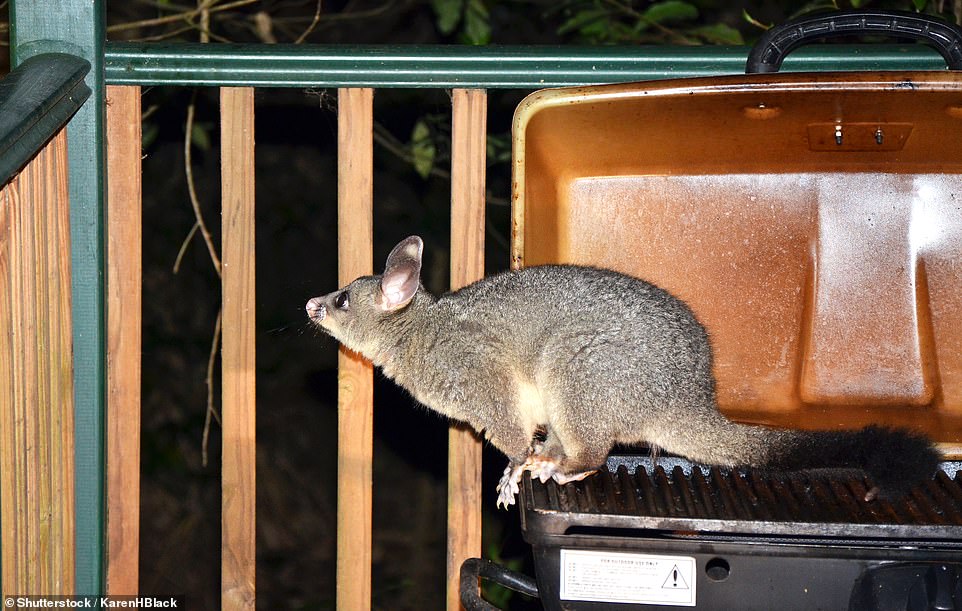 Sydney is home to brushtail possums (pictured), which live in people’s roofs and eat shrubs from their gardens 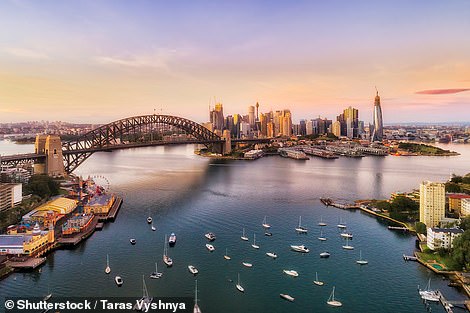 Sydney Harbour is the largest natural harbour in the world, the book points out, and in it, 600 different species of fish can be found

Sydney Harbour is the largest natural harbour in the world, the book points out, and in it, 600 different species of fish can be found.

Thrillingly, bull sharks are sometimes spotted – and humpback whales swim past the city on their way from Antarctica to tropical waters.

As you might expect, kangaroos and wallabies make an appearance in Sydney too, usually in the less busy parts. Though the book reveals that in 2018 a wallaby was spotted hopping across Sydney Harbour Bridge.

There are ‘powerful owls‘ to spot, too, and brushtail possums, which live in people’s roofs and eat shrubs from their gardens.

Look up and you might also see sugar gliders – they use flaps of skin between their front and back legs to glide more than 50 metres in the air – and flying foxes, a species of bat that roost in trees in the day and swoop around looking for flowers and fruit at sunset.

One creature that’s best avoided in the city is the deadly Sydney funnel-web spider, which is one of the world’s most venomous. Luckily, Australian doctors are very good at treating bite victims, with zero fatalities since 1981, the book says reassuringly. 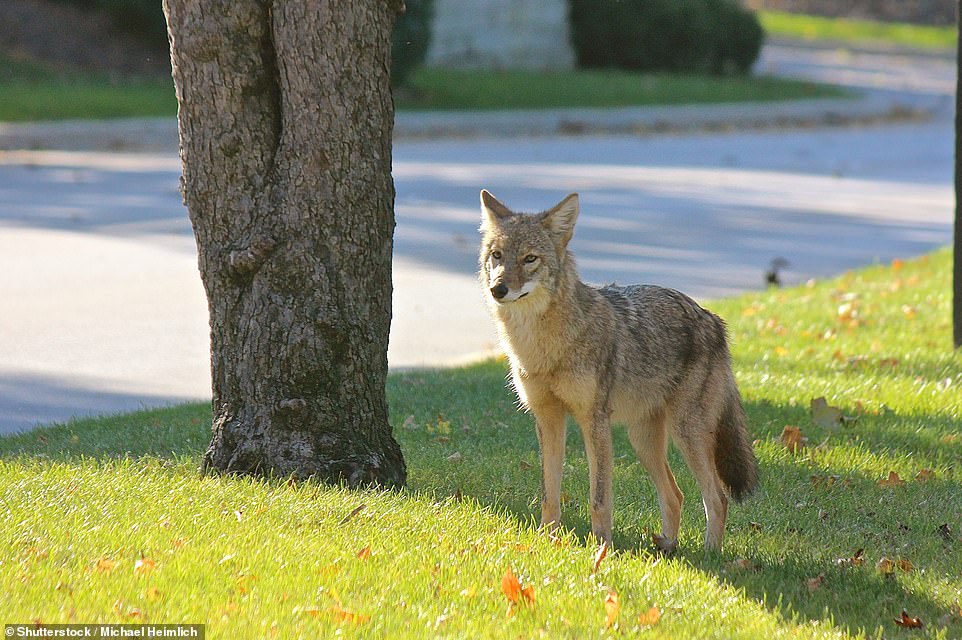 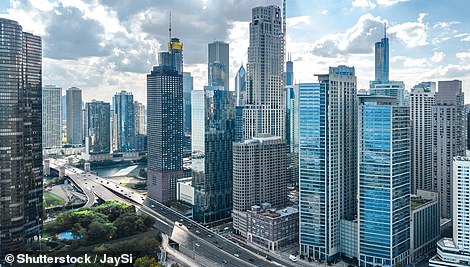 Big cats in Chicago? It’s true, says Wild Cities. Wild cougars sometimes venture into the suburbs, perhaps because they’re looking for a mate, they’re lost, or they want to find a new home.

The Windy City is also home to 13 species of frog, black-crowned herons, coyotes – one once walked into a sandwich shop and lay down in the drinks cooler – and white-tailed deer.

And each year more than 200 species of migrating birds pass through the area. Though Wild Cities says it’s a dangerous path for them because the skyscraper lights can confuse them.

The city, it says, has a special team of people that care for birds that have struck a building. 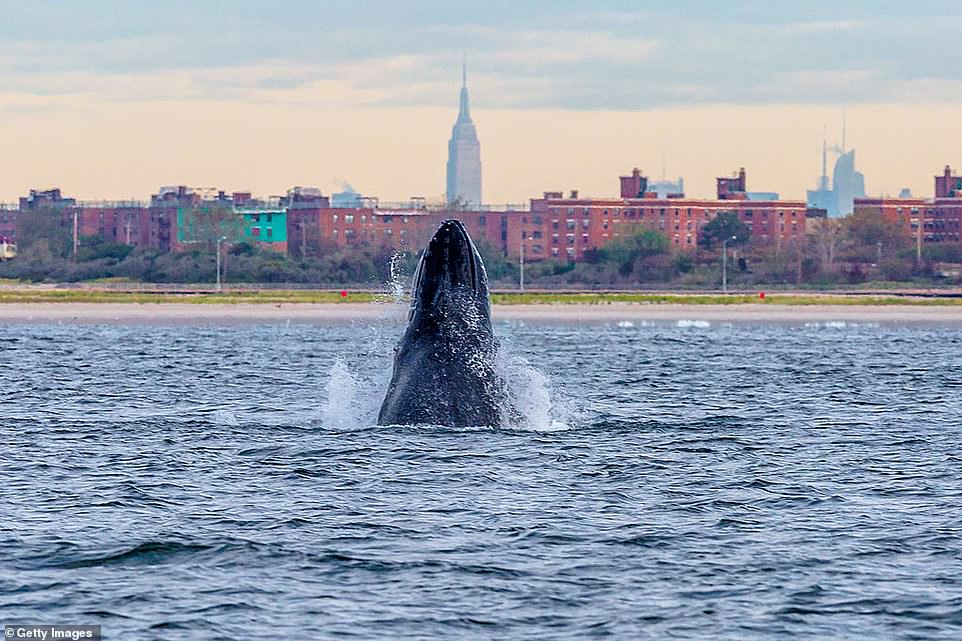 A humpback whale ‘spyhops’ (the act of coming up for a look around) off Rockaway Peninsula, Queens, with the Empire State Building in the background 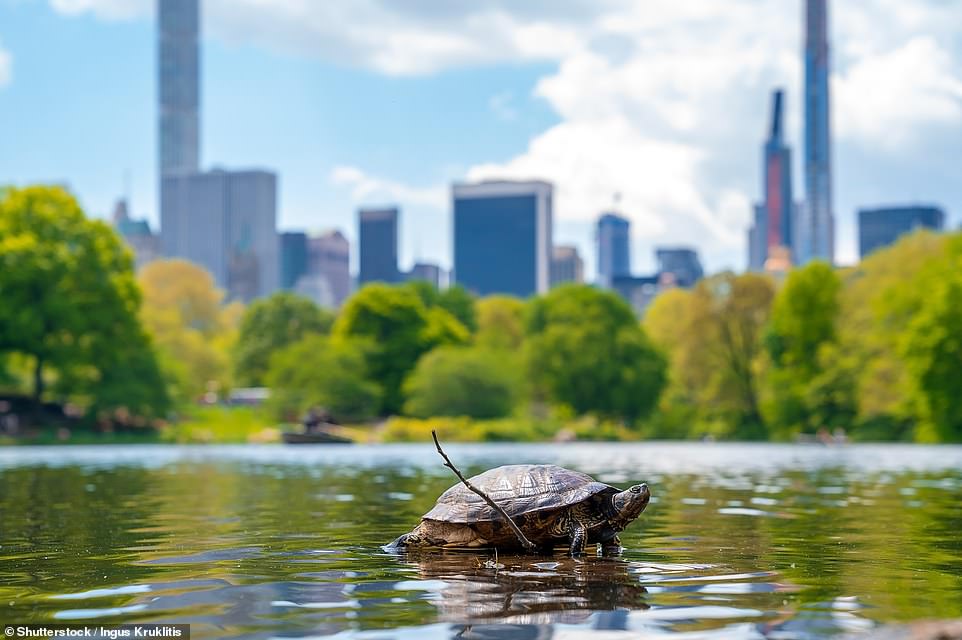 Five different types of turtle can be found in New York, in Central Park (pictured) and near JFK Airport 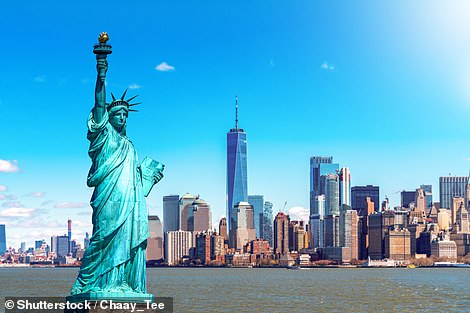 Let’s start small and work our way up to the big stuff.

The Big Apple is home to around 1.6billion pavement ants, apparently. They’re experts at seeking out food dropped by humans. 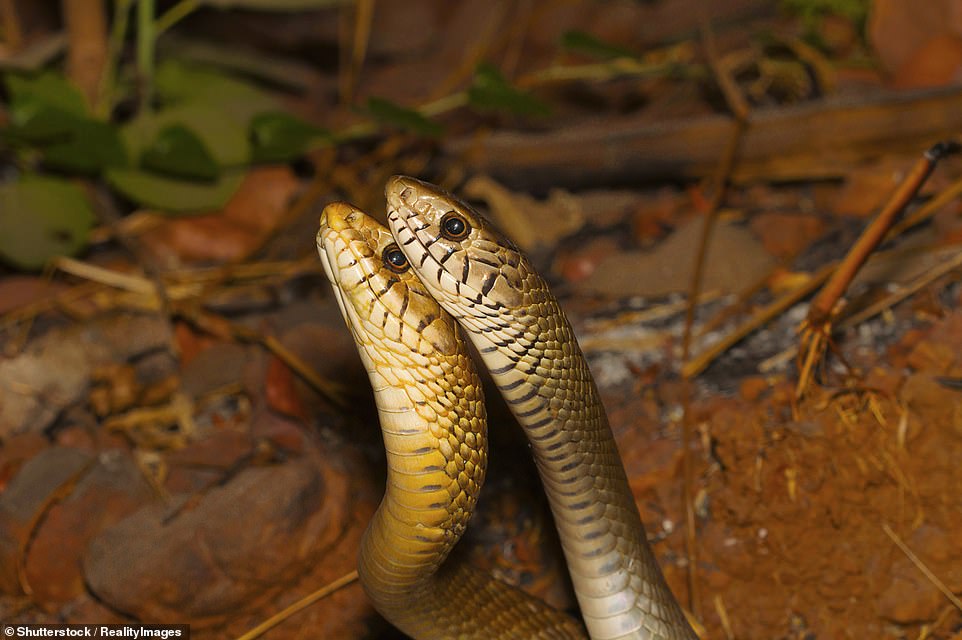 Two male rat snakes fight in Mumbai, which is home to multiple serpent species – some poisonous 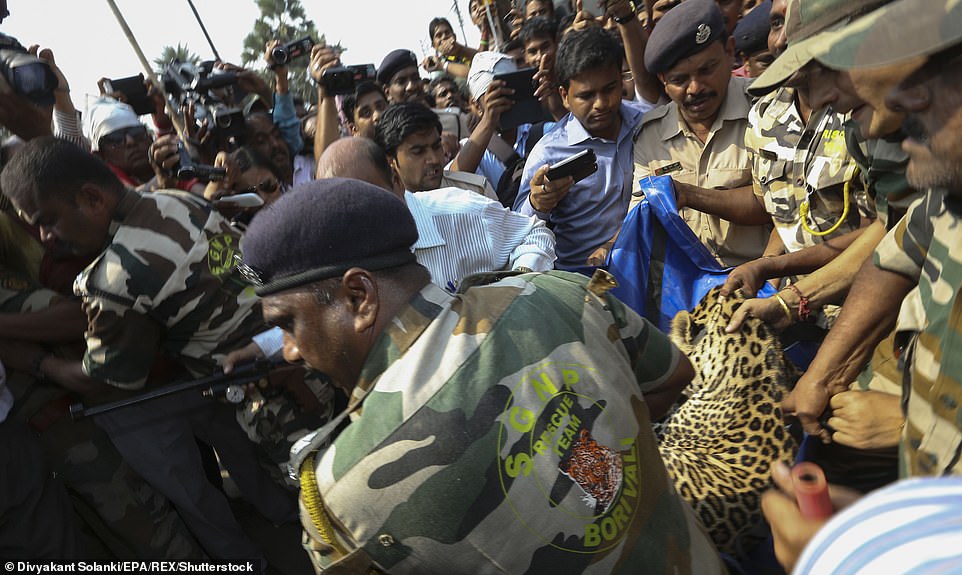 Officials From Sanjay Gandhi National Park Rescue Team carry a tranquilised leapord, which was captured in a residential area of Mumbai 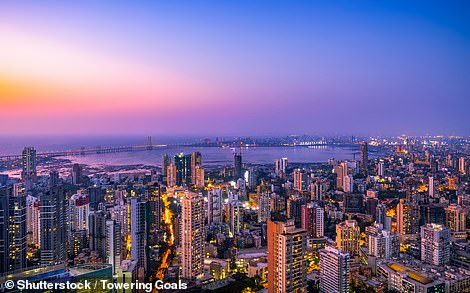 There are eyes and ears in places you might not expect in Mumbai, says Wild Cities

There are eyes and ears in places you might not expect in this tropical India mega-city, says Wild Cities.

Yes, there are leopards.

In fact, there are parts with more leopards per square kilometre than anywhere else in the world. These incredible big cats have apparently learned that people’s rubbish attracts dogs and cats – ‘the perfect dinner’.

So leopards ‘prowl into the suburbs… in search of a filling meal’.

The city is also home to flamingos, macaque monkeys, snakes (some poisonous) and more than 150 species of butterfly. 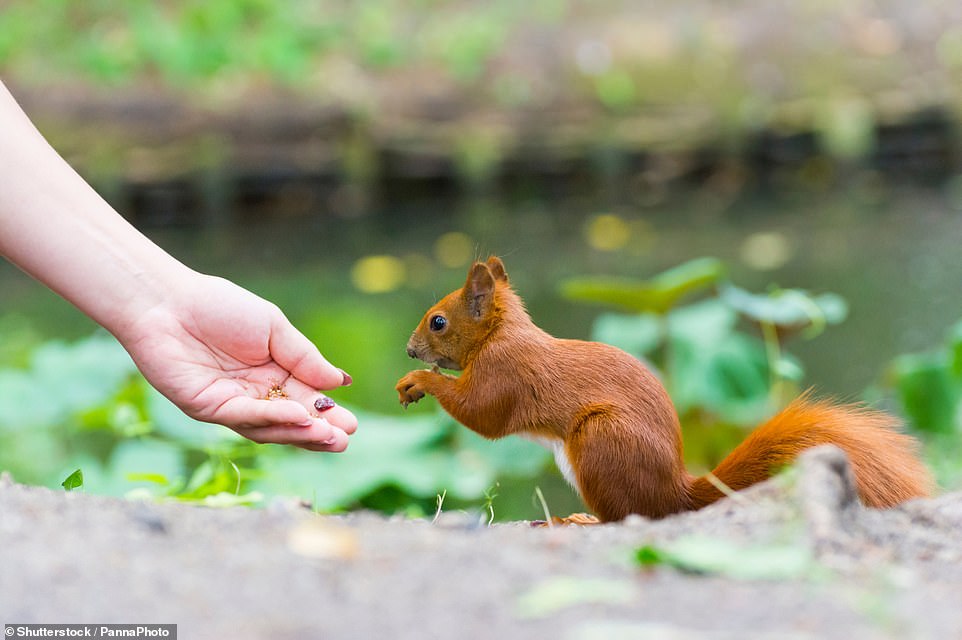 In the Royal Lazienki Park, pictured, there are around 200 resident wild red squirrels

Our cities are growing bigger. It’s estimated that well over four billion of us worldwide live in urban areas, with this figure set to rise further in coming decades. As manmade settlements, it’s easy to think of our cities as purely human environments, but this reckons without the legions of resourceful animals that see the land as theirs, too. The lockdown helped bring urban wildlife into focus – we saw stories of goats and boars wandering the streets, and city-dwellers being able to wallow in birdsong in a way that’s usually impossible – but this is far more than just a passing phenomenon.

From deer in Chicago and penguins in Cape Town to otters in Singapore and leopards on the outskirts of Mumbai, the breadth of today’s urban wildlife is astonishing. Some have been living in and around cities for decades, others for far less, but all have learned how to make the most of their surroundings. And like us – whether they’re pavement ants, peregrines or porcupines – they’re simply doing their best to survive.

One of the messages I try to get across in my new children’s book, Wild Cities, is how important it is that we not only notice the wildlife we encounter in our cities, but also that we understand it, and place value on it. And the more we choose to learn about the birds and beasts that live in our urban settlements, the better it becomes for all of us. 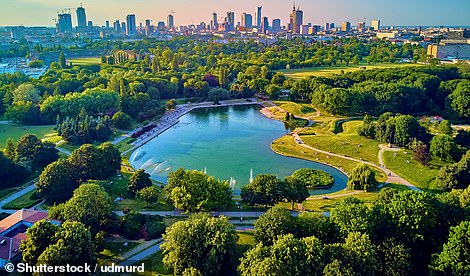 Wolves and moose are occasional visitors to Warsaw

There is a cornucopia of amazing wildlife in Warsaw.

Wolves have been seen slinking through the outskirts, the book says, and wild moose ‘occasionally find their way into the city’s suburbs’.

In the Royal Lazienki Park, meanwhile, there are around 200 resident wild red squirrels – and now and again, gigantic white-tailed eagles hunt for fish in the city’s Vistula River. 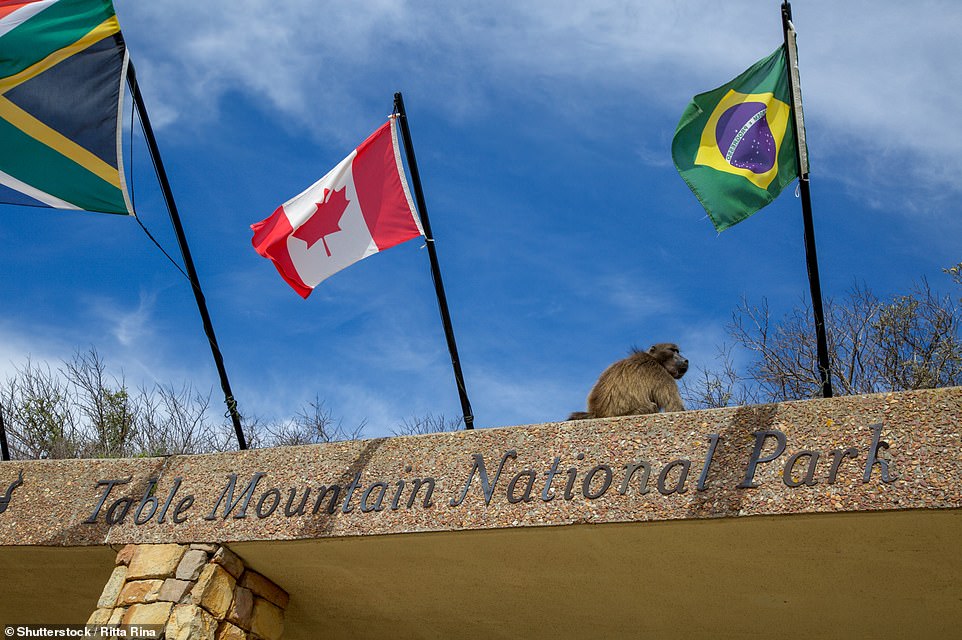 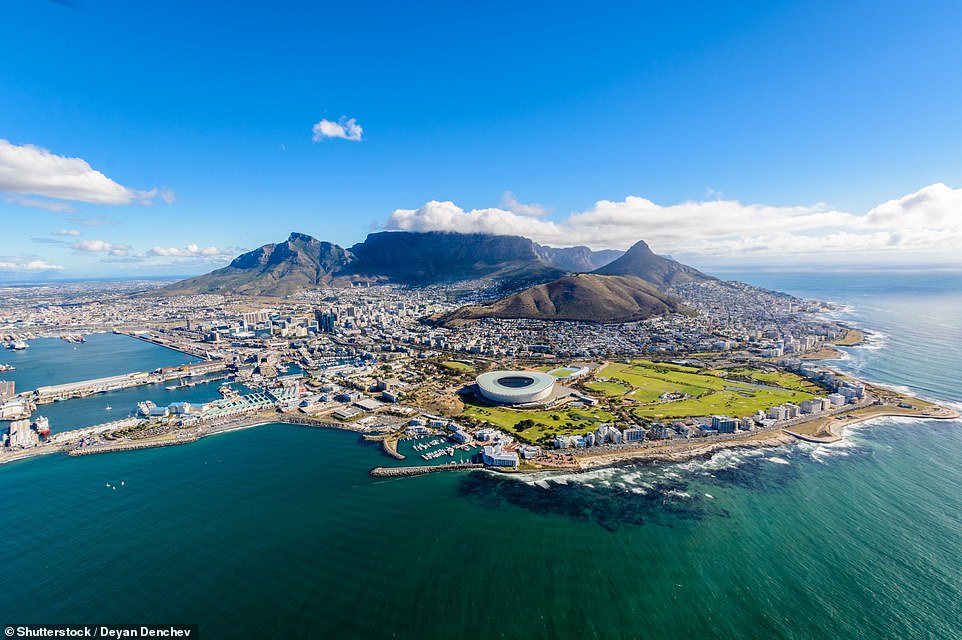 Cape Town is home to a multitude of exciting creatures says Wild Cities, including whales and great white sharks 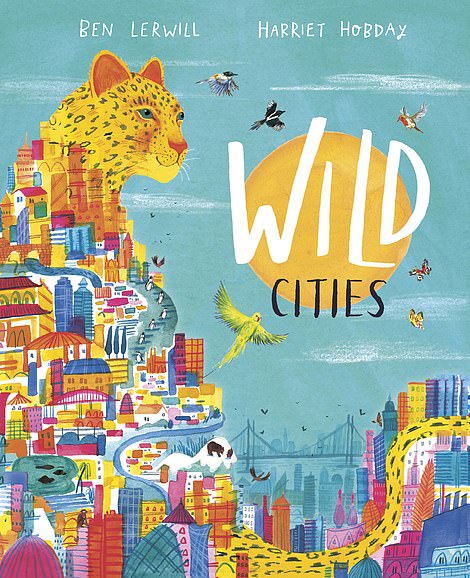 Wild Cities is out now, written by Ben Lerwill, illustrated by Harriet Hobday

It says that if you’re in the city between June and November you might be lucky enough to spot southern right whales swimming along the coast.

Cap fur seals hang around in the harbours and great white sharks patrol the waters around Seal Island, a few kilometres out.

That’s because the island is home to around 60,000 seals.

Go up the colossal Table Mountain that towers over the city and you’ll see rock hyraxes (a little rabbit-y mammal) among the rocks (yes, the clue is in the name), drive along the city’s coast a bit and you can see a colony of African Penguins and look up in the skies and in the treetops, and you’ll see all manner of birds.

There are over 600 species in Cape Town, including the brightly feathered orange-breasted sunbird.

Anything else? Yep, baboons. Several hundred call Cape Town home. And the residents have their patience tested by them, as they are known to steal shopping and even squeeze into houses.

Wild Cities is out now, written by Ben Lerwill, illustrated by Harriet Hobday, and published by Puffin Books, RRP £12.99. Ben has also contributed a story for The Puffin Book of Big Dreams called Keep Flying Little Bird, with illustrations by Chris Wormell. Pictures in this feature sourced by MailOnline Travel.