EXPRESS INFORMER > News & Politics > Up to 10,000 care home residents and staff will get monthly Covid-19 tests

Up to 10,000 care home residents and staff in England will get monthly coronavirus tests, the government announced today.

Health chiefs have launched another surveillance scheme in the hope of tracking how Covid-19 has spread through nursing homes around the country.

Care minister Helen Whately – who has come under fire for appearing to blame scientific advisers for the catastrophe that unfolded in care homes – said the results will help plan to prepare care homes in the future.

In this wave of the UK’s epidemic care homes have been battered by Covid-19 and more than 14,000 residents have died with the virus in England and Wales alone.

The government was accused of overlooking care homes in a scramble to provide for the NHS and bosses have repeatedly called for regular testing in their facilities.

The new testing programme will be carried out at 106 care homes run by Four Seasons, with thousands of residents and staff tested for past and present infection.

It comes after it was reported today that health chiefs are planning to turn dozens of empty shops into walk-in coronavirus testing centres in Britain.

Many people who don’t drive are unable to use drive-in testing centres, leaving them with only an at-home test option unless they’re in hospital – but these are in high demand.

Around 10,000 care home residents and staff will have regular swab tests (pictured) over the next four months, and then blood tests over an 18-month period to see if they have had the coronavirus in the past

The Department of Health is determined to diagnose more cases of Covid-19, with its average over the past two weeks around 1,200 per day but estimates suggesting between 3,000 and 4,000 people are catching the virus each day.

There are only four walk-in test centres currently operating in England, in Leeds, Newcastle, Rochdale and London, according to the government – although there are also reports of centres in Leicester and Slough.

Suspected patients at walk-in clinics will be tested in the same way, with a swab of the back of their throat and inside their nose.

Samples are then posted to laboratories and patients get the results back within a few days.

MailOnline has approached the Department of Health for comments on the plans to turn vacant shops into more walk-in testing centres, first reported in The Times.

The Department revealed details of its care home surveillance testing this morning, saying it planned to track how the virus spread through England’s homes.

Around 400,000 people in England live in care homes, spread across approximately 21,000 facilities. The majority of them have dementia – around 60 per cent. 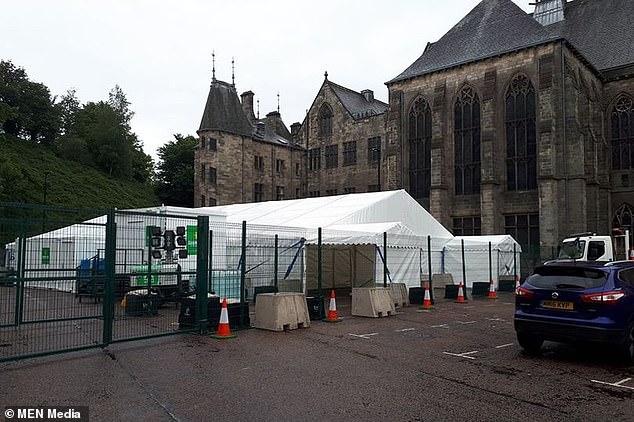 Walk-in testing centres are being trialled around England for people who need to get tested but don’t drive. Pictured: A walk-in centre in Rochdale, Manchester

Because it would be unfeasible to test them all, the government has selected a representative sample of 10,000 staff and residents across 106 homes.

They will be given swab tests – to see if they are currently infected – three times each over the next four months.

And they will also be given antibody tests – which test the blood to look for signs of past infection – in three months’ time.

Just 2,300 Britons are being struck down with the coronavirus every day, according to scientists behind an app that monitors the size of the outbreak across the UK.

King’s College London’s COVID Symptom Tracker app estimates that cases in the UK have shrunk by a third in the space of a week. For comparison, daily infections were above 11,000 last month.

The researchers, working alongside health tech company ZOE, have collected data on symptoms and test results from one million UK citizens since the crisis began to unfold.

Last week they used this data to estimate that there were 3,612 people catching the virus every day in Britain — 35 per cent more than today’s figure of 2,341.

Most of the new cases — 1,978 — are appearing in England, the team said, along with 241 per day in Wales and 122 in Scotland. No estimates are made for Northern Ireland, however. 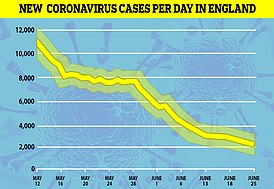 The data suggests the virus is spreading most widely in the Midlands, which is experiencing 716 daily cases, above the 330 in the North East and Yorkshire and 319 in the East of England.

The scientists running the project claimed the steady decline showed the crisis was ‘tailing off’ but warned people need to be ‘cautious when heading back to normal life’.

It comes after Boris Johnson this week dramatically unwound the coronavirus lockdown, bringing the country out of ‘hibernation’ — with a return for pubs, haircuts and weddings and family and friends getting the green light to meet up indoors for the first time in months.

The Prime Minister said he wanted to ‘make life easier’ after an ‘incredibly tough time’ with bars, restaurants, cinemas and hairdressers in England able to get back up and running from July 4 – dubbed ‘Super Saturday’.

Those who test positive for antibodies, which could mean they are immune to reinfection, will be followed up after six months and then again after a year to see how long the antibodies last for.

The study will reveal what proportion of care home residents and staff have caught the disease, and the swab testing will hopefully pick up any new or ongoing outbreaks. It is being run with the help of University College London.

Professor Martin Green, the chief executive of the charity Care England, which represents homes around the country, welcomed the move.

He said: ‘Care homes are the front line and this opportunity is welcome. This study is absolutely critical if we are to win the battle against Covid-19.

There is still so much to learn about this virus; why some care homes have tested positive whilst displaying no symptoms or deaths and others have felt the full force of the brutality of this silent killer.

‘The Government’s study will help us understand the way in which this virus operates thus enabling us to be better prepared today, tomorrow and in the future.’

The study started on June 11 with some of the participants having blood tests done to see whether they have had coronavirus already.

This service is not available to the public yet because scientists do not know whether it actually protects people, or if the same person can suffer from Covid-19 twice.

Swab testing will then be used to check where the virus is actively spreading in care homes.

Comprehensive swab testing is now vital for tracking the virus as Britain moves out of lockdown and the government has widened its criteria for who can get tested to include anyone with symptoms.

Swab tests now feed into the NHS’s test and trace system, which launched at the beginning of this month and contacts everyone who has been near an infected case.

Number 10 has faced a barrage of criticism over its flagship Test and Trace scheme, which was finally launched three weeks ago.

The system has been hailed as a necessity for getting out of lockdown and global health chiefs said functioning tracing programmes are vital for beating the virus.

But shocking figures released last week showed only 10,000 Covid-19 patients have been asked to give details of all their close contacts.

Separate government data suggests around 3,000 people are being infected each day in England alone because only a fraction are getting diagnosed.

Many people with the virus don’t get symptoms so don’t realise they are ill, meaning they don’t get tested.

It comes after Boris Johnson faced a huge backlash yesterday as he claimed in the Commons that no country has a working Covid-19 tracing app.

The PM dismissed criticism over the failed NHS software, which was abandoned last week — despite being considered CRUCIAL.

Health Secretary Matt Hancock originally promised the app — which was trialed on the Isle of Wight — would be rolled out nationwide in mid-May.