At the time of writing the merits of Rwanda as a refuge for asylum-seekers are being hotly debated in the UK – but one thing’s for sure, there’s no questioning the magic of its wild landscapes and the incredible animals that live in it.

On a recent visit I went on a trek to find the country’s most famous animal inhabitant – the mountain gorilla, the world’s largest primate.

The adventure took place in the thickly vegetated Volcanoes National Park Rwanda and we finally came face to face with a family of gorillas after 30 minutes or so.

MailOnline Travel’s Sadie Whitelocks went on a magical gorilla-trekking expedition in Volcanoes National Park Rwanda, and after a short time met a troop of gorillas that included a mother and her one-month-old infant, captured by Sadie in the picture above 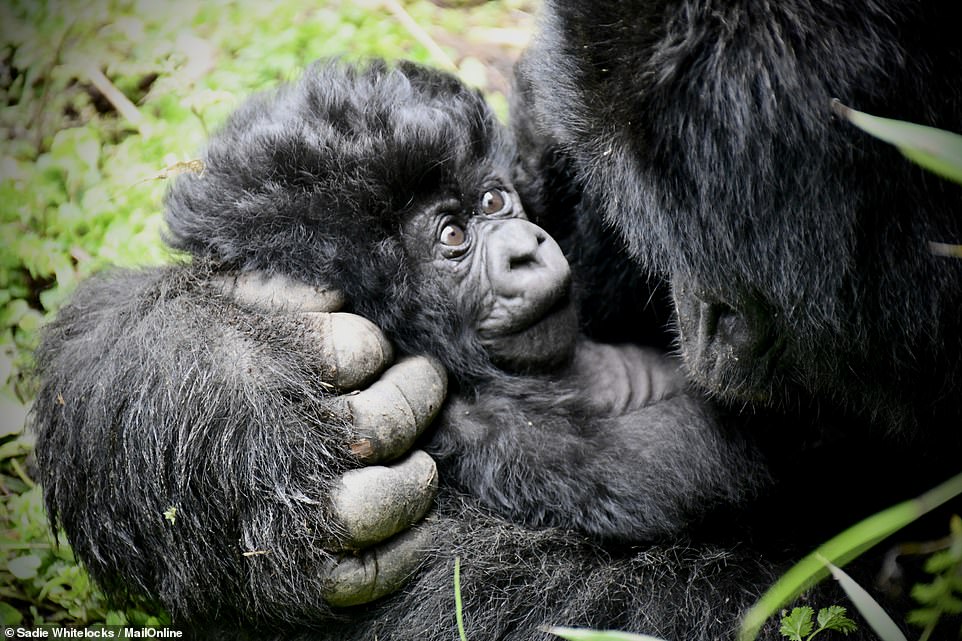 Sadie describes how her heart was pounding as her small group approached the family of gorillas. Above is another shot of the adorable one-month-old infant in the group 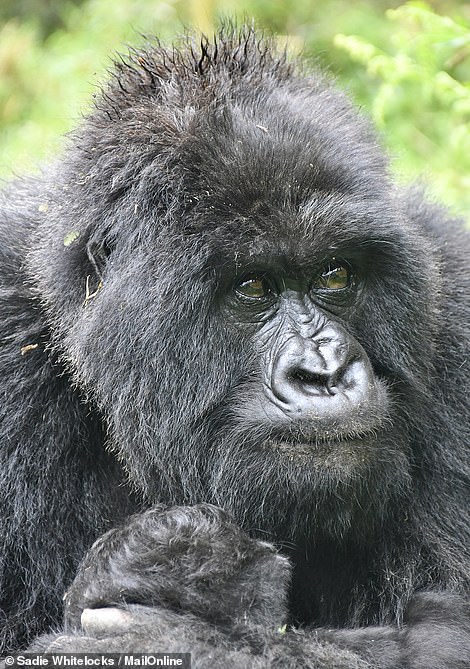 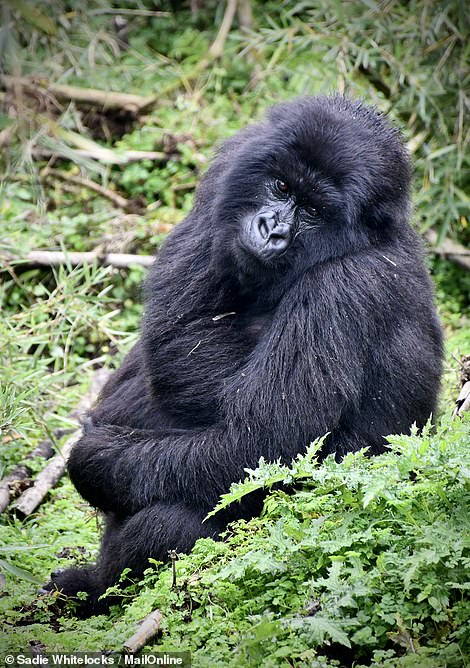 Sadie writes of her gorilla encounter (above left and right): ‘It was like being in a scene from a David Attenborough documentary and our gorilla trekking group sat there in silence for around an hour, in awe of the gorillas’ beauty and their mesmerisingly human-like traits.’ A 2016 census revealed there were around 600 gorillas in the Virunga Massif, a chain of volcanoes spanning the northern border of Rwanda, the DR Congo, and Uganda

We knew we were getting close when we began hearing excitable grunts, howls and screeches. It was difficult, though, to pinpoint where they were coming from given the density of weed-strewn trees and clumps of bamboo.

My heart was pounding.

Then, as we turned a corner, our guide Jolie warned us to slow down and be quiet as a family of gorillas came into view. There was a mother rolling around with a tiny one-month-old, a car-sized silverback munching on leaves and several more of his hareem scattered around.

It was like being in a scene from a David Attenborough documentary and our gorilla trekking group sat there in silence for around an hour, in awe of the gorillas’ beauty and their mesmerisingly human-like traits.

Before setting off, one elderly lady in our group explained that visiting Rwanda’s gorillas was one of her bucket-list items, but like many, she had to put her dreams on hold due to the pandemic.

Now the country has reopened – with rapid Covid-19 tests being the only requirement – and tourists are steadily returning to feast on its offerings.

It was magical being so close to the gorillas but at the same time, I felt slightly guilty about venturing into their habitat with cameras clicking away. 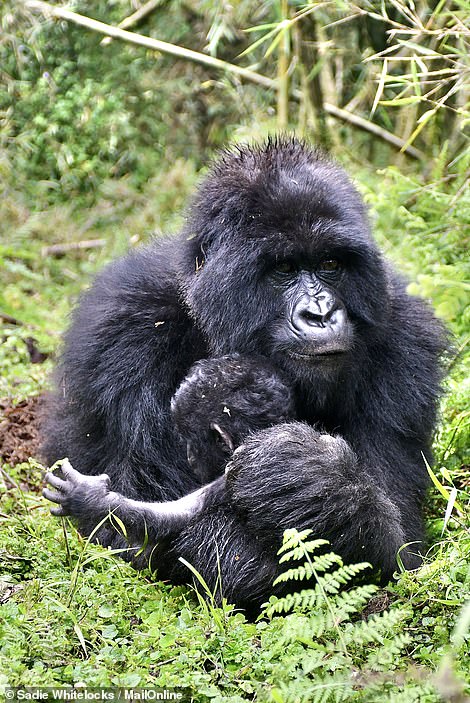 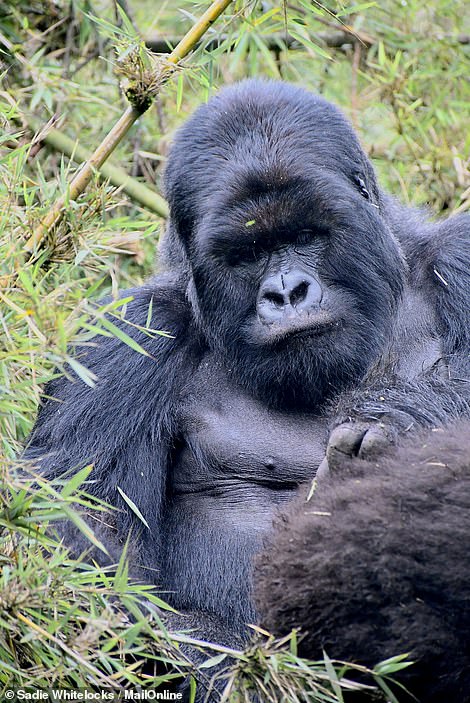 Sadie says that she felt guilty venturing into the gorillas’ habitat ‘with cameras clicking away’, but conservationist Veronica Vecellio from the Dian Fossey Gorilla Fund told her that the interactions do not stress the animals. Pictured left is the mother gorilla with her one-month infant and on the right, a silverback 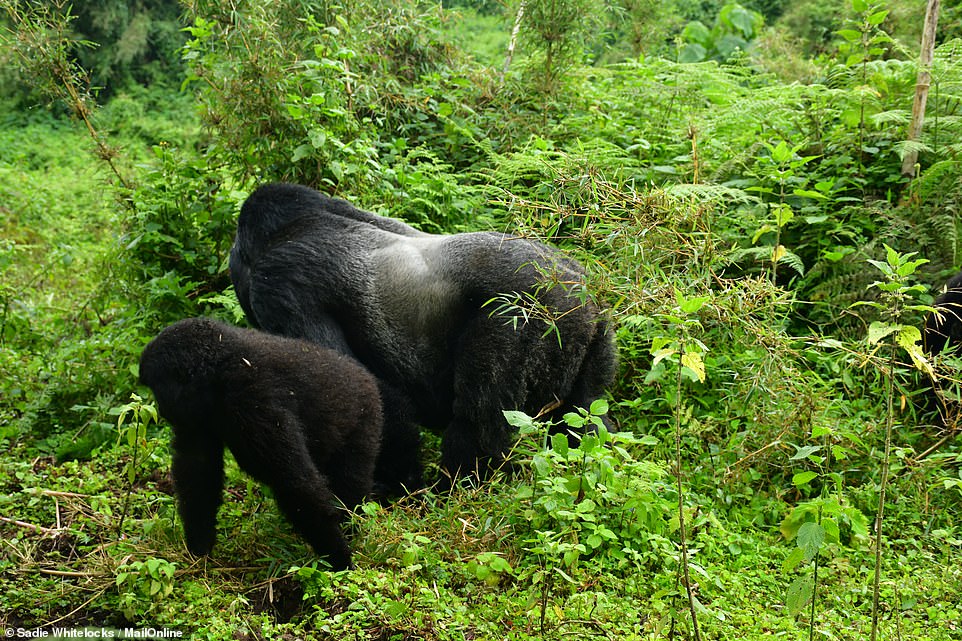 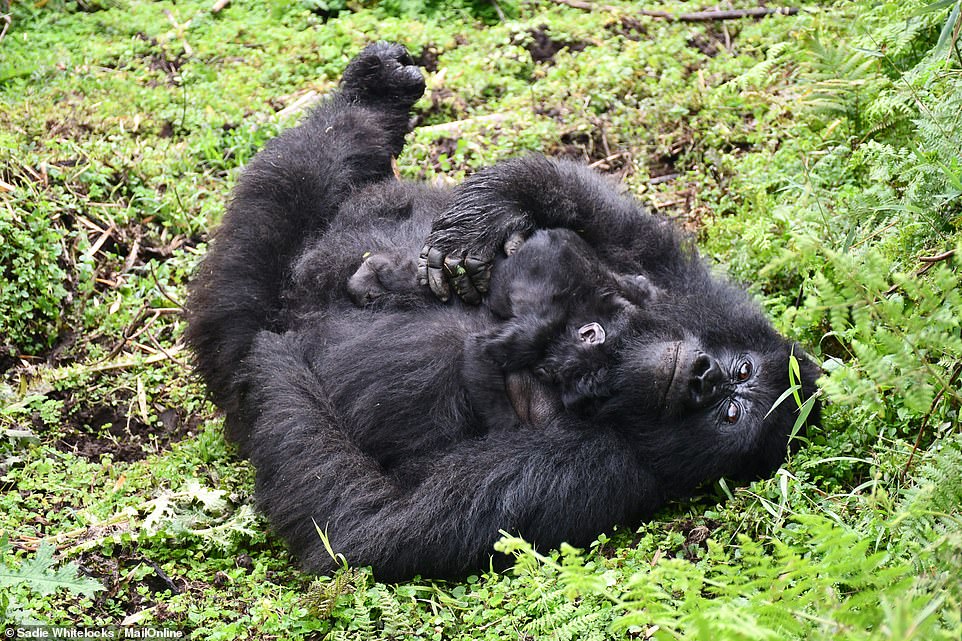 Conservation expert Vecellion told Sadie that the gorillas had probably had a ‘party’ while the tourists were away during the pandemic but at the same time, ‘tourism helps with the Rwandan economy and to educate people about habitat loss, poaching and the importance of protecting our environment’. Above is another shot Sadie took of the mother gorilla cuddling her infant

Veronica Vecellio, a conservation expert I spoke to from the Dian Fossey Gorilla Fund (a non-profit founded by the late American primatologist and conservationist Dian Fossey), admitted that the gorillas had probably had a ‘party’ while the tourists were away but at the same time, ‘tourism helps with the Rwandan economy and to educate people about habitat loss, poaching and the importance of protecting our environment’.

She added: ‘There have been studies around the proximity of humans to gorillas, with cortisol levels monitored, and it was found that there was no stress caused by interactions.

‘Gorillas are extremely smart and know that we are there but they are not alarmed. This is the sign of a well-managed habituation project whereby the gorillas are exposed to humans. Our work is helping to keep the species alive.

‘In the 2016 census there were around 600 gorillas in the Virunga Massif [a chain of volcanoes spanning the northern border of Rwanda, the DR Congo, and Uganda], but now we expect there to be lots more.’

My gorilla trekking encounter had taken place on my third day in Rwanda, and before that, I’d decided to explore a lesser-visited spot – dormant volcano Mount Karisimbi. 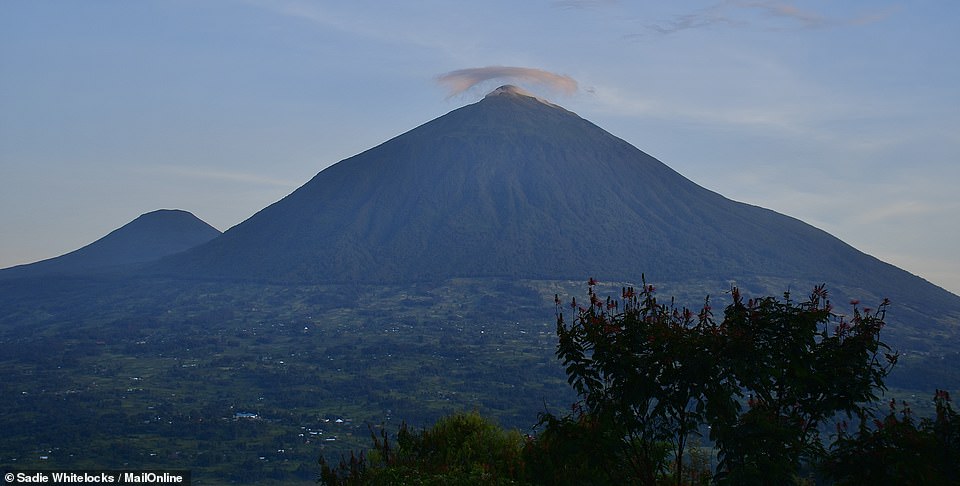 A stunning shot Sadie took of dormant volcano Mount Karisimbi. She reached the summit at 14,787ft (4,507m) during a two-day hike. Mount Karisimbi is the highest point in Rwanda and located in the Volcanoes National Park, on the border with the Democratic Republic of the Congo 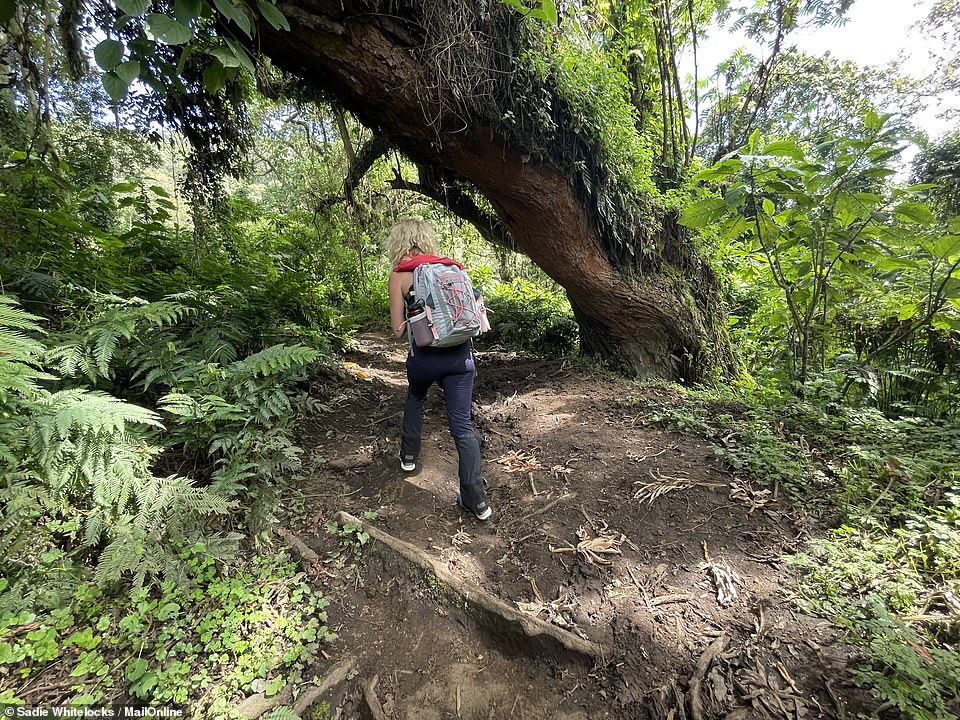 Sadie, pictured, said of the hike up Mount Karisimbi: ‘Given its steep slopes and meandering paths through shoe-swallowing bogs and gulleys of shin-deep mud, this certainly isn’t a trek for the faint-hearted’ 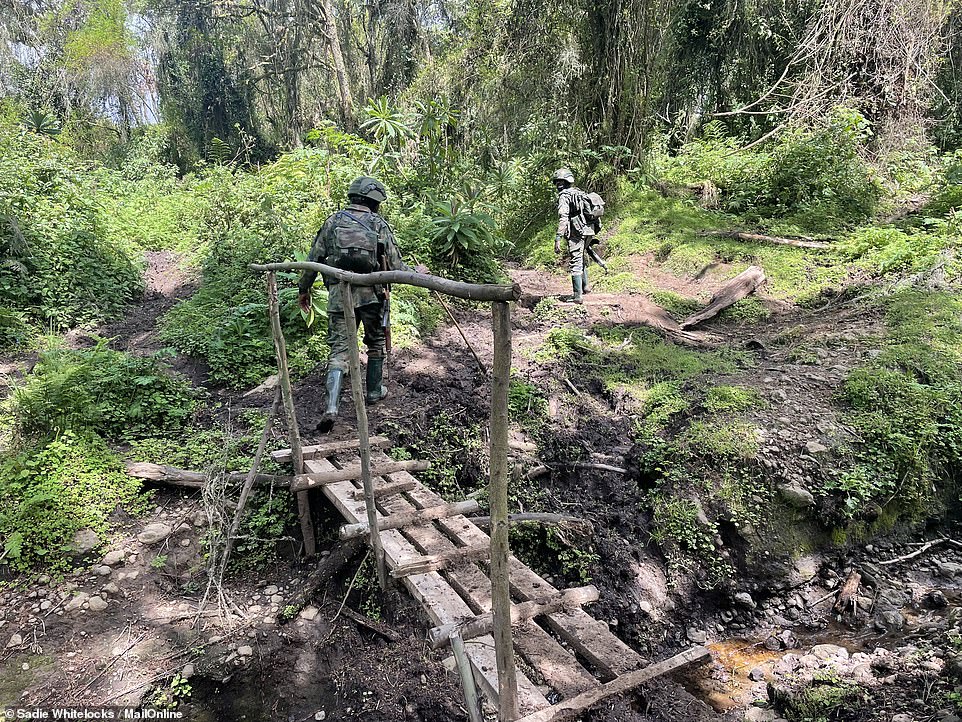 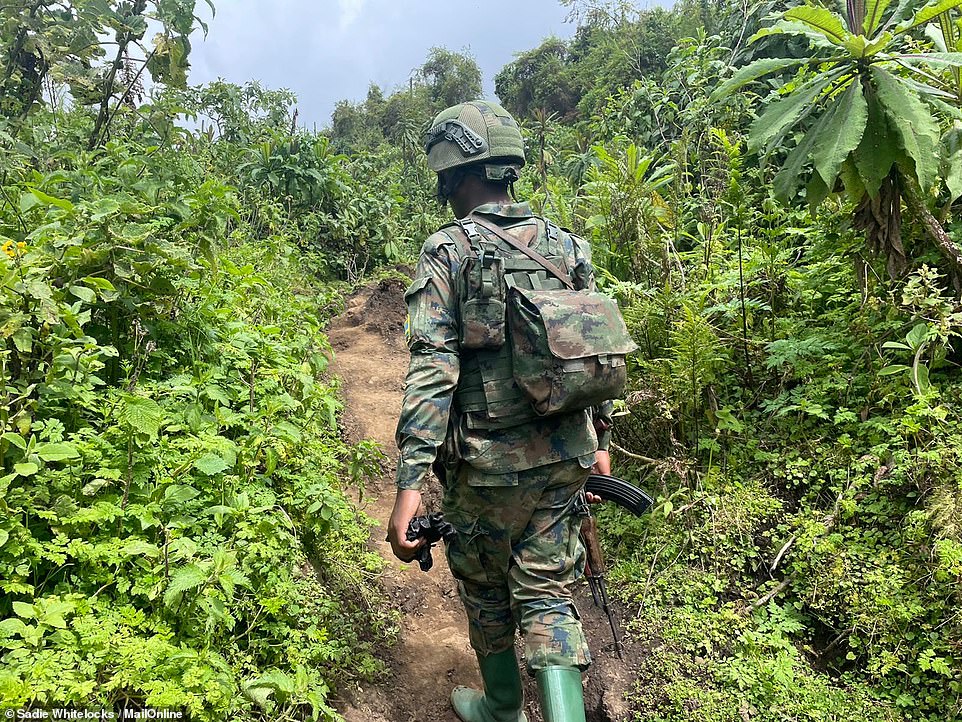 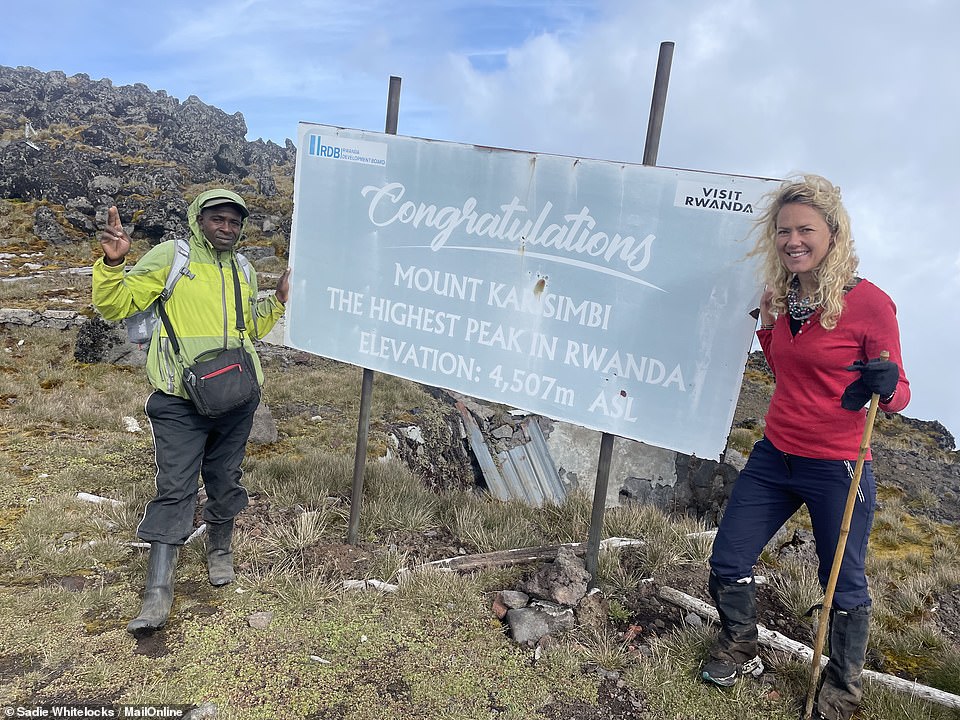 After a bit of a slog, Sadie made it to the top of Mount Karisimbi and stopped for a picture before heading down

The peak, which tops 14,787ft (4,507m), is the highest point in the country and also located in the Volcanoes National Park, on the border with the Democratic Republic of Congo.

Given its steep slopes and meandering paths through shoe-swallowing bogs and gulleys of shin-deep mud, this certainly isn’t a trek for the faint-hearted.

Along with the difficult terrain, its proximity to DR Congo, where fighting has erupted, means that ambushes are a risk and all treks are conducted with armed soldiers in tow [the Congolese government is accusing Rwanda of backing rebels in the east of the country and Rwanda has accused the DRC of bombing Rwandan territory].

On my trek, along with six soldiers and a guide, I was joined by two other intrepid tourists, Serge and Michele, who told me they had the goal of summitting the highest points of every country in the world.

After conquering all of the more traditional peaks, from Everest in Nepal to Ben Nevis in Scotland, the duo from Montreal were focused on some of the more obscure spots on the map.

Serge, who had spent 18 years in the Canadian military, explained to me that six armed soldiers were a necessary precaution so they could keep a lookout from all angles. 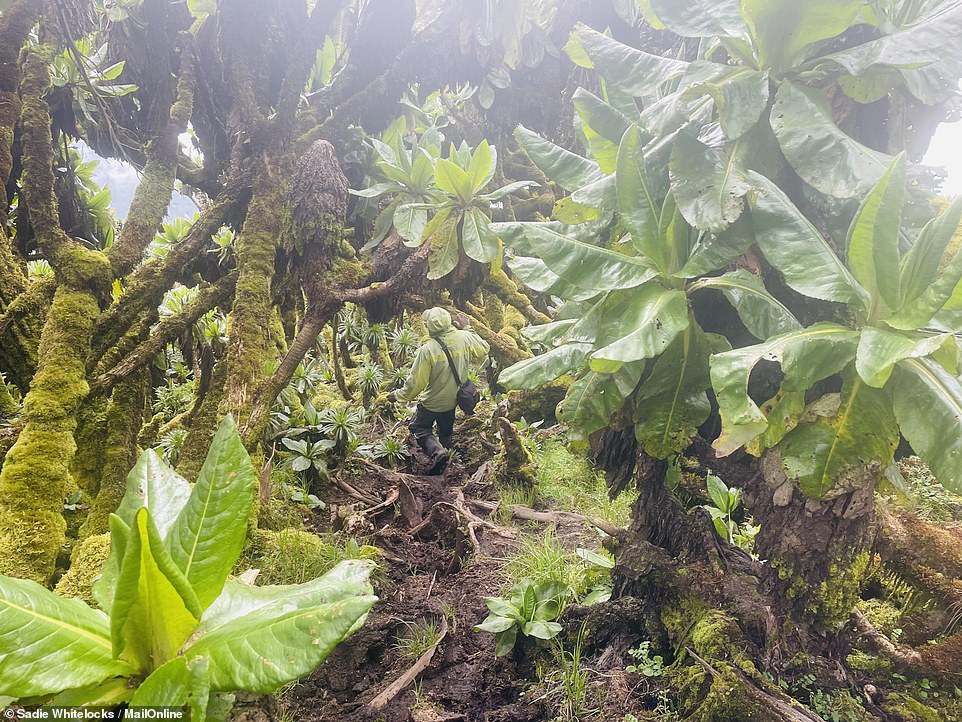 A shot Sadie took on the way down from the summit of Mount Karisimbi, with the guide camouflaged amid the foliage 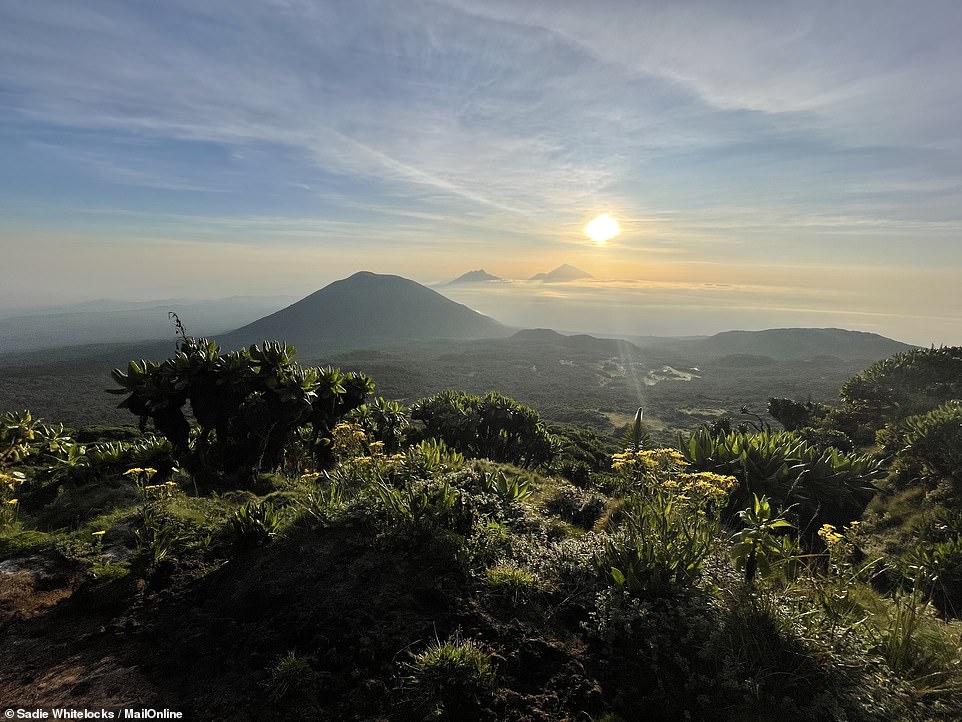 Sadie said the views on the Mount Karisimbi trek (above) were ‘otherworldly, with other volcanic peaks bobbing above the clouds and a cocktail of oranges and yellows melting into a cornflower blue sky’ 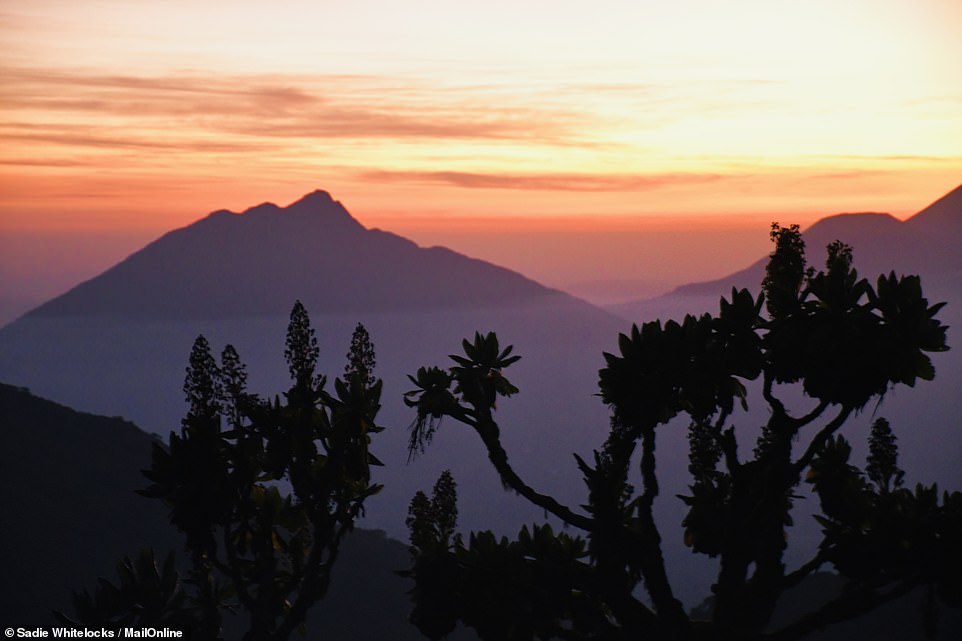 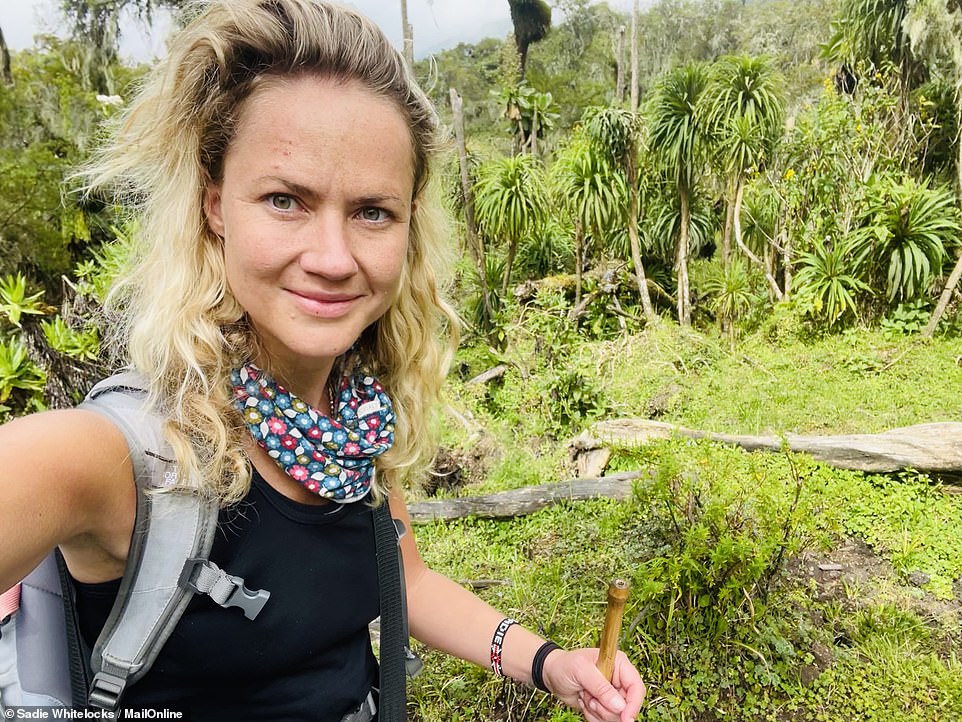 A selfie Sadie took during her epic hike up Mount Karisimbi, which she explains is home to an impressive spread of wildlife 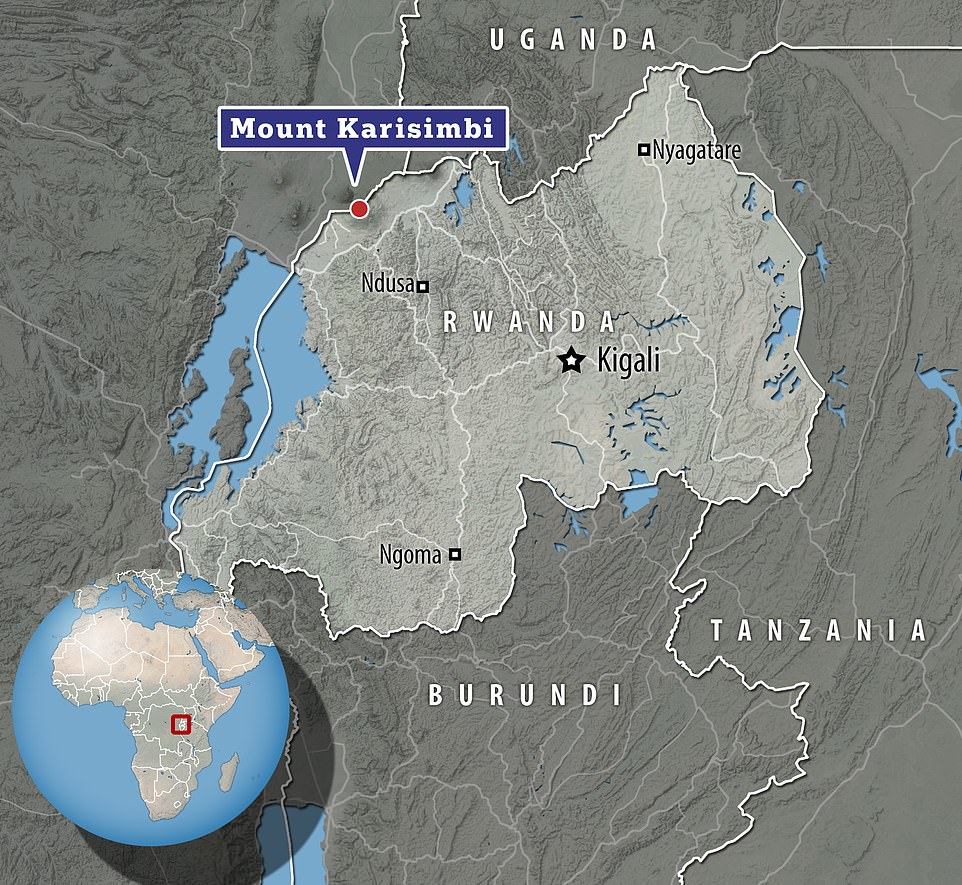 Emmanuel the guide also highlighted that Mount Karisimbi is home to an impressive spread of wildlife and sometimes rogue gorillas and buffalo can be a danger to hikers.

‘If we fire the guns in the air, the animals will back away,’ he said.

The trek up the mountain took two days and we spent the night on the floor of a small hut located at 11,482ft (3,500m). The next morning, we set off at around 5.30am with the sunrise, to reach the summit.

Along the way, the views were otherworldly, with other volcanic peaks bobbing above the clouds and a cocktail of oranges and yellows melting into a cornflower blue sky. 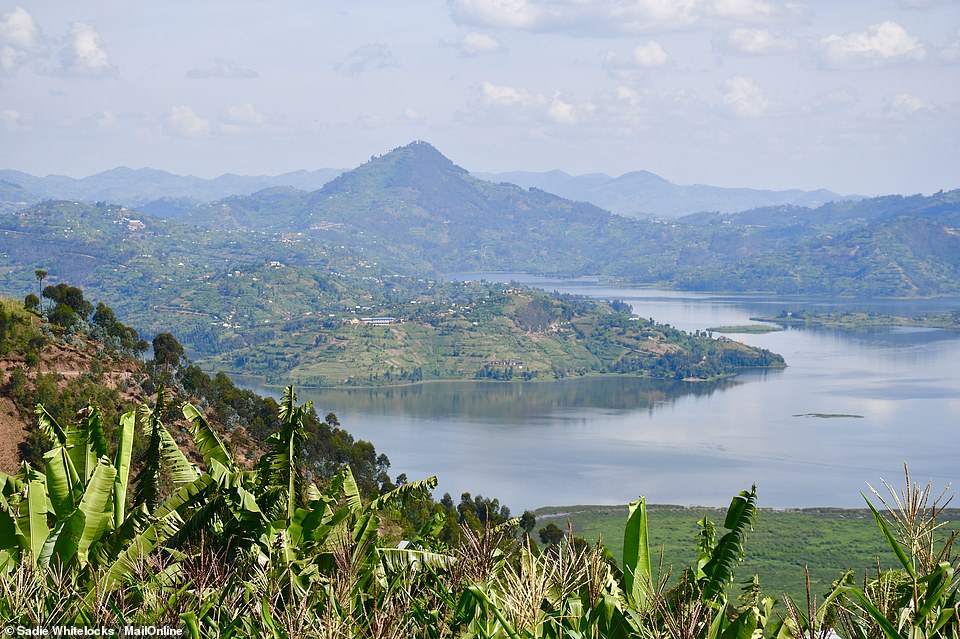 Sadie stayed at the highly acclaimed Virunga Lodge hotel, which is perched on a hillside around a 40-minute drive from Volcanoes National Park Rwanda. Above, the view from a road leading to the lodge 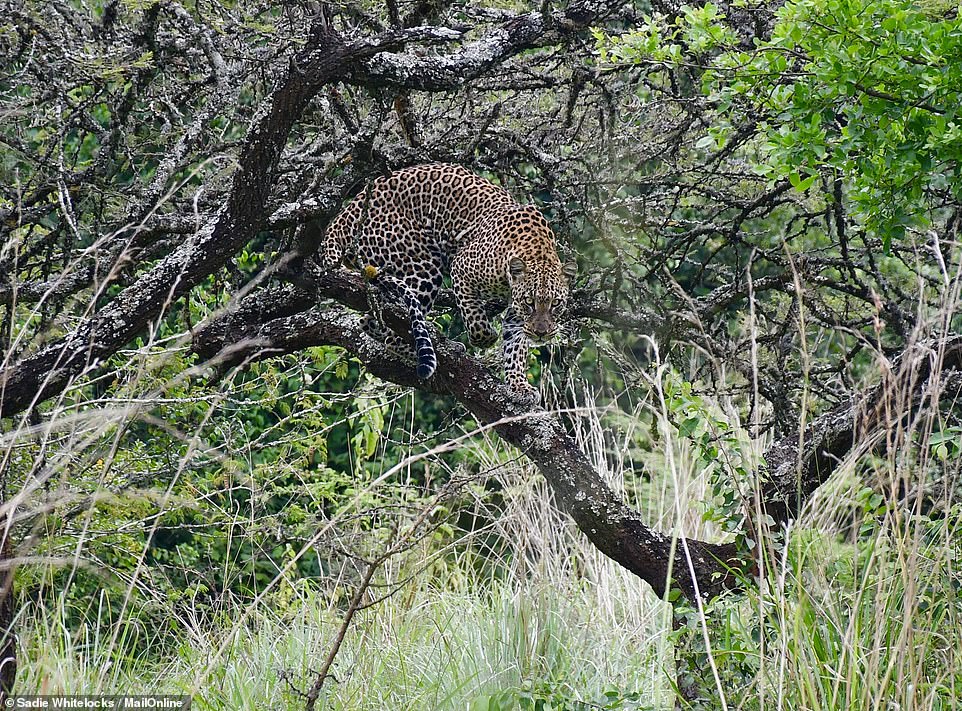 Towards the end of her trip, Sadie visited Rwanda’s Akagera National Park and spotted a leopard (above) thanks to her guide’s ‘eagle eyes’ 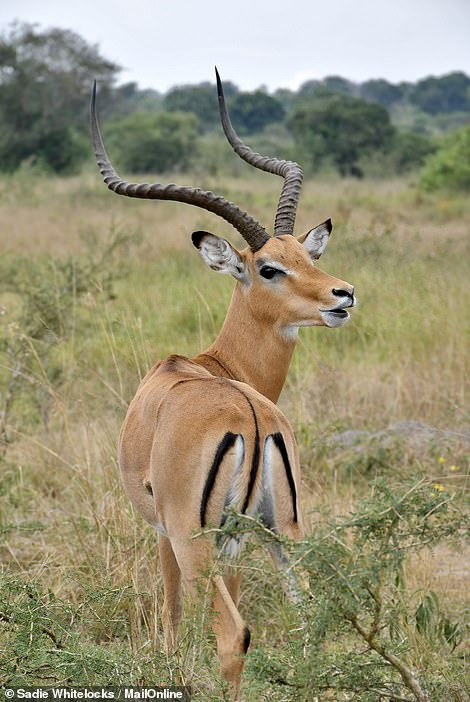 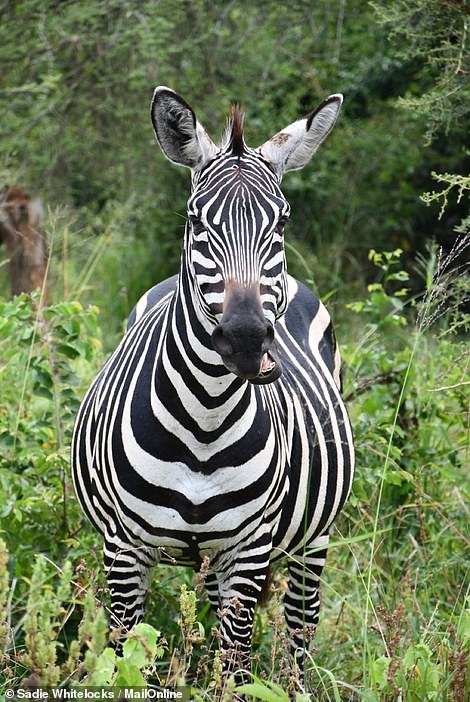 There’s an excellent assortment of animals in Akagera, Sadie reveals. She snapped an antelope (left) and a zebra (right) and also spotted lions, white rhinos, and buffalo 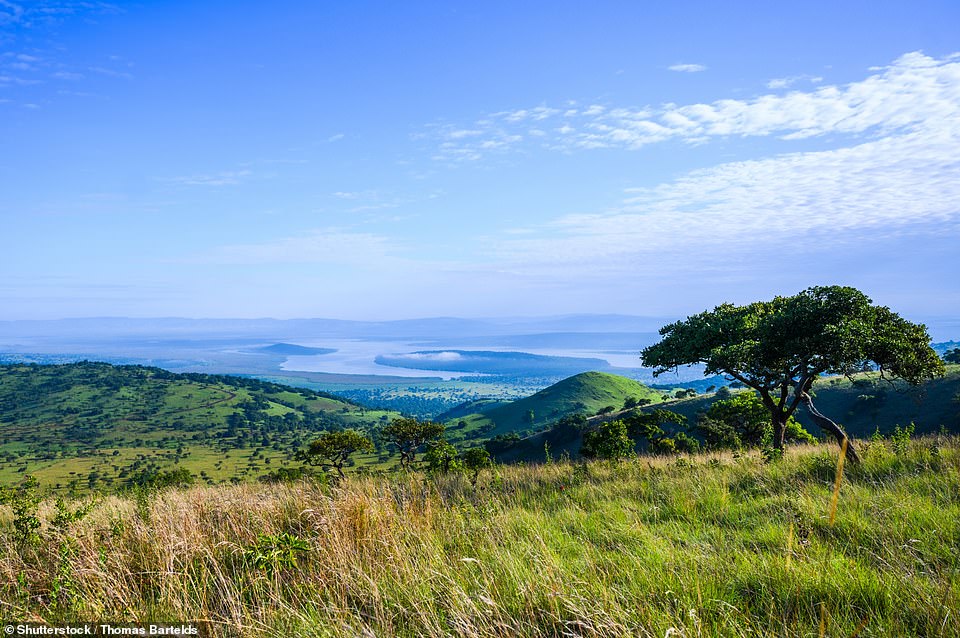 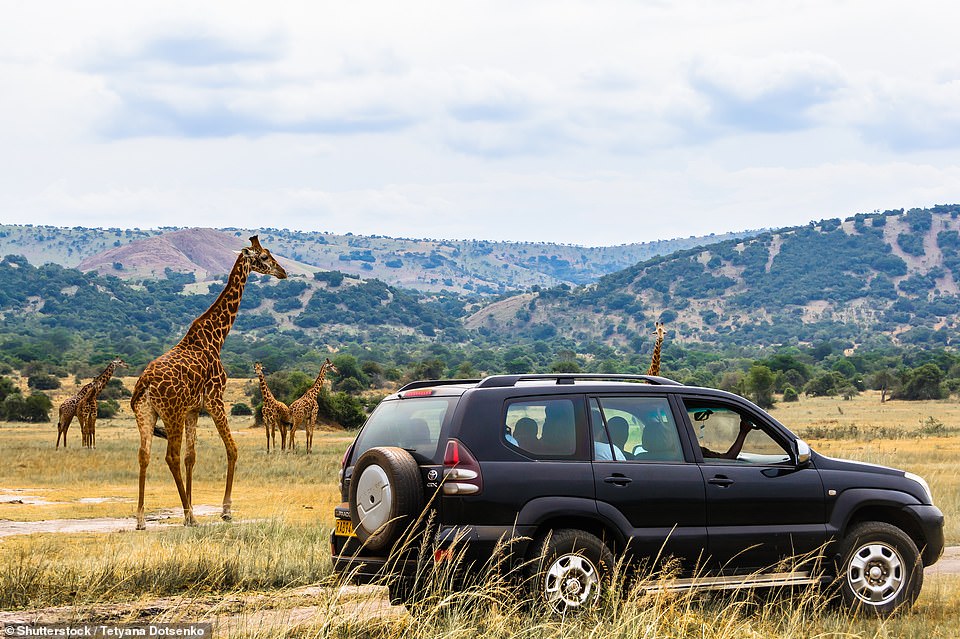 Visitors to Akagera National Park (above, stock image) can opt for a self-drive safari or hire a guide

A peek inside the room at Virunga Lodge that Sadie stayed in. The hillside hotel has just 10 villas, decked out with four-poster beds and outdoor showers

Virunga Lodge by Volcanoes Safaris serves as a great basecamp to explore Mount Karisimbi and to visit the gorillas and golden monkeys at Volcanoes National Park. The lodge, which includes 10 villas, a communal dining area and spa, can help with logistics with tailor-made itineraries and drivers provided. Rates start from £600 ($740) per person sharing a villa in low season.

For a change of scenery, Rwanda’s Akagera National Park in the east lends itself to self-drive safaris with the possibility of spotting lions, leopards, elephants, black rhinos and buffalo. For an eco-lodge experience book into Karenge Bush Camp.

Flights to Kigali, Rwanda, run direct from London, Heathrow, with Rwandair. For more information on what Rwanda has to offer, visit www.visitrwanda.com.

After a few days of winding my way around Rwanda’s mountainous landscape and enjoying the charming surroundings of the highly acclaimed Virunga Lodge hotel, which is perched on a hillside around a 40-minute drive from Volcanoes National Park, I ventured east to visit the country’s biggest national park, which borders Tanzania.

Akagera National Park, first established in 1934 and now covering 1,122km sq (433 miles sq), serves up some of Africa’s most scenic swathes of savannah.

It is home to more than 8,000 animals including lions, leopards, black rhinos, buffalo, and elephants and visitors can opt for a self-drive safari or hire a guide.

I spent two days navigating the sprawling park with some of the highlights being a night drive where we spotted a pride of lions, a stay at the Karenge Bush eco-camp, which boasts superb views, and an early morning walk with trackers to monitor the park’s white rhinos, which were introduced in 2021 from a private game reserve in South Africa.

Then, just before exiting the park, thanks to the guide’s eagle eyes, we had a chance encounter with a leopard who was slung across a tree branch lapping up some shade.

‘So what do you think of Rwanda?’ my driver Mike asked me on my last day in the country as he feasted on a liver kebab I’d bought him for dinner as a thank you.

Without a pause, the first word that sprang to mind was ‘beautiful’.

This is a place that promises to leave a lasting impression, not only with its abundant wildlife and dramatic landscapes but also with the kindness of its people, who have lived through genocide, poverty and more, but still maintain a sense of hope and triumph.