Life on board the Titanic’s colossal sister ship as she served collecting wounded soldiers during the First World War has been revealed in previously unseen photographs.

Nurses rushing across decks, crammed wards and steaming engine rooms captured by the black-and-white images offer a tantalising glimpse into conditions on board before the vessel sunk on 21 November 1916.

His Majesty’s Hospital Ship (HMHS) Britannic set sail in February 1914, but was requisitioned by the military before she could begin her first commercial voyage, and drafted in to battling against Germany and the Ottoman Empire.

The vessel completed six voyages and transported thousands of wounded soldiers back to Southampton and Liverpool from the frontlines near Lemnos, Greece, before hitting a land mine in the Aegeanon 21 November 1916.

Boats bobbing nearby rushed to save the 1,030 people on board including nurses, soldiers and sailors. Only 30 people lost their lives.

The 48,000-tonne Britannic went down in 55 minutes, almost two hours faster than the Titanic, becoming the largest ship to disappear beneath the waves during the war.

The images offering a tantalising glimpse into life on board 104 years ago have been revealed in The Unseen Britannic: The Ship in Rare Illustrations by Simon Mills.

The Britannic sunk on 21 November 1916 in 55 minutes after striking a land mine. Pictured above are nurses on her decks while she remained in service, bringing the wounded back to Southampton 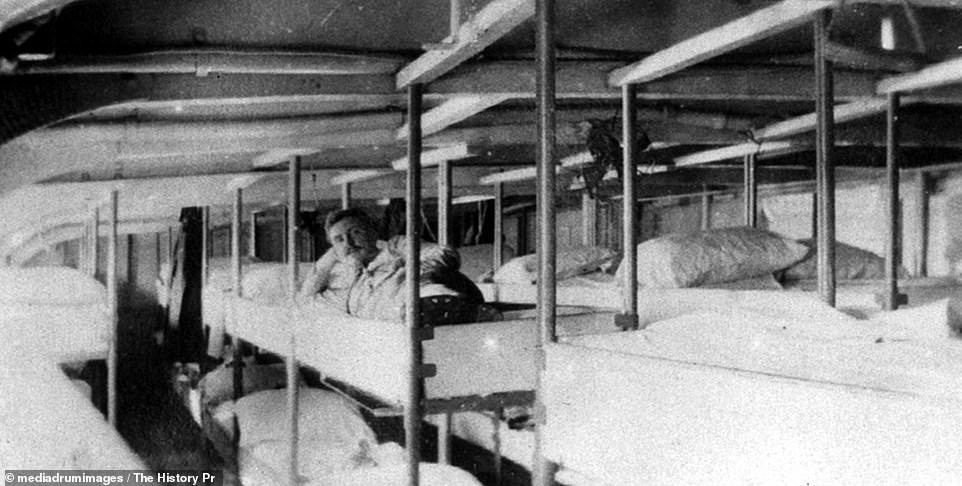 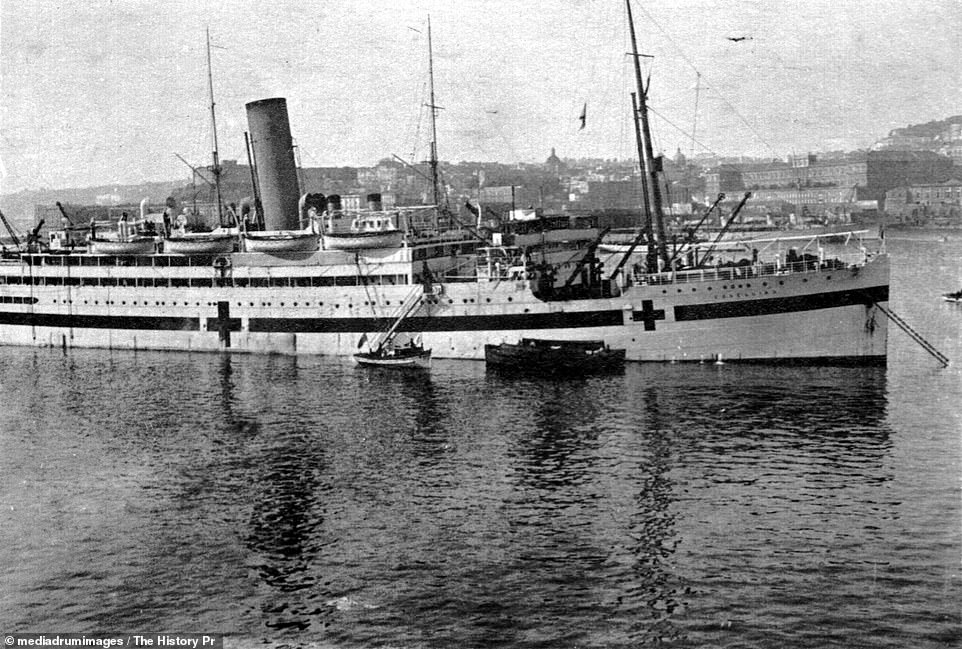 The Britannic completed six voyages between Southampton and Lemnos, Greece, before she sunk in 1916 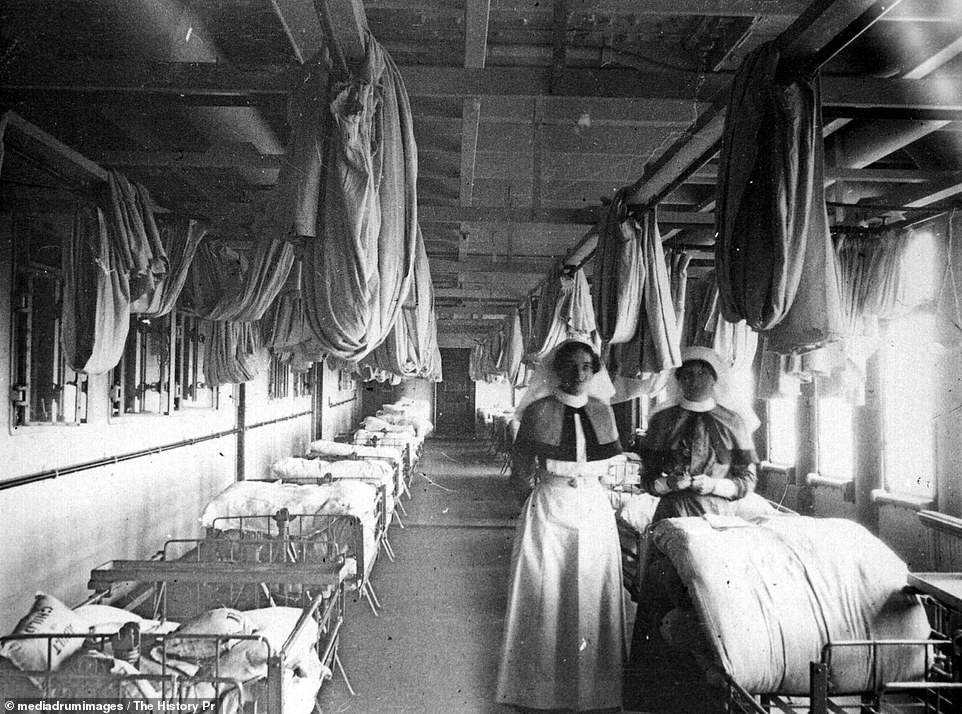 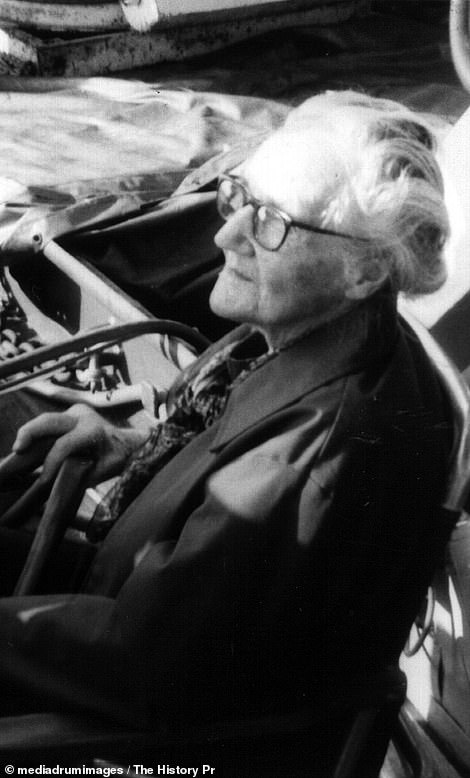 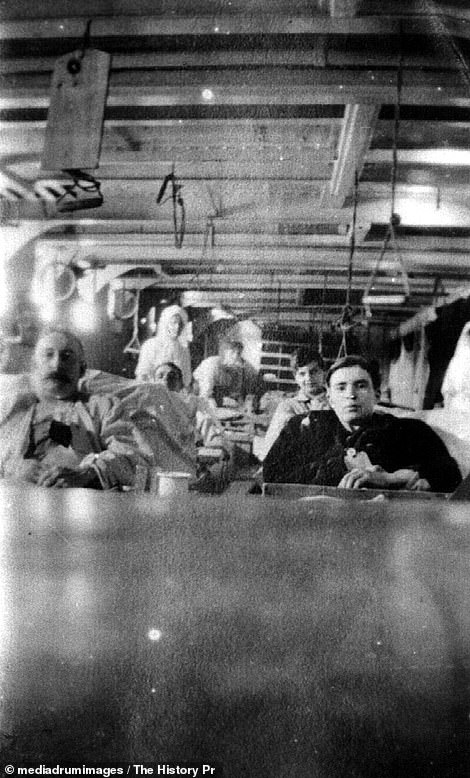 Nurse Sheila Macbeth (left) was on the ship when it sunk. She wrote in her diary about hearing a loud bang before rushing to her cabin to collect her things. Men are also seen in the hospital ward (right) 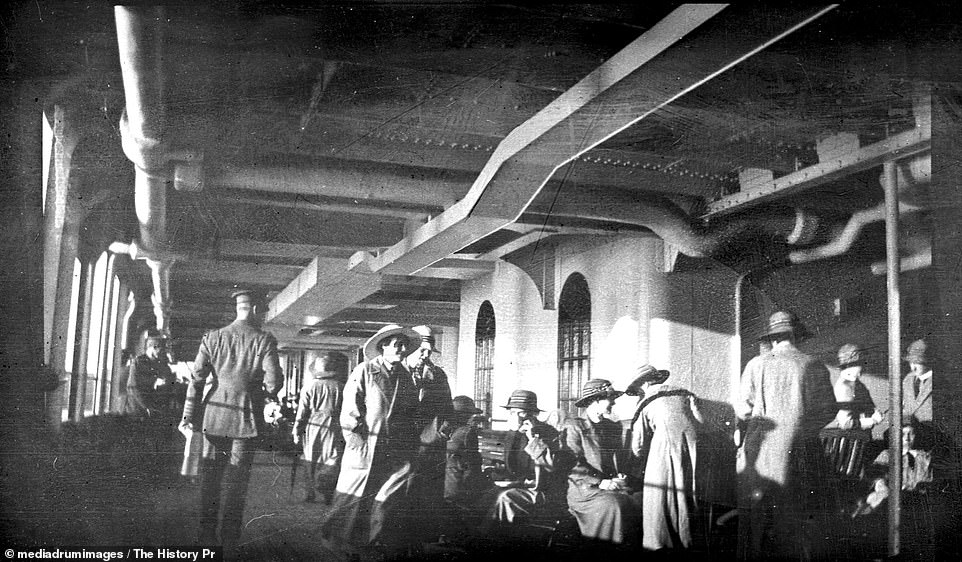 Two nurses smile out of one photograph showing the ships deck crammed with hospital beds while, in another, a soldier looks up at the camera from rows and rows of bunkbeds tightly fitted into a cabin.

A second shows medical staff wearing coats and large hats relaxing on deck as soldiers walk past, and a third shows the engine room hidden below deck.

The ships’s construction in 1912 is also revealed as a forest of scaffolding surrounding the gradually forming hull of the vessel.

Nurse Sheila Macbeth, 26, was on the ship when it hit a mine at 8am. She wrote in her diary, available in the collections of Edinburgh University: ‘Up late – so only managed to get two spoonfuls of porridge before: Bang! and a shiver right down the length of the ship.

‘Of course we all knew what it was! We had thought too much about torpedoes to be surprised to have met one at last. When the siren sounded, I went off to my cabin… and then hung over the side of the ship.

‘In our boat, we got well away from the sinking ship and busied ourselves with the wounded, whom we picked out of the water.’ 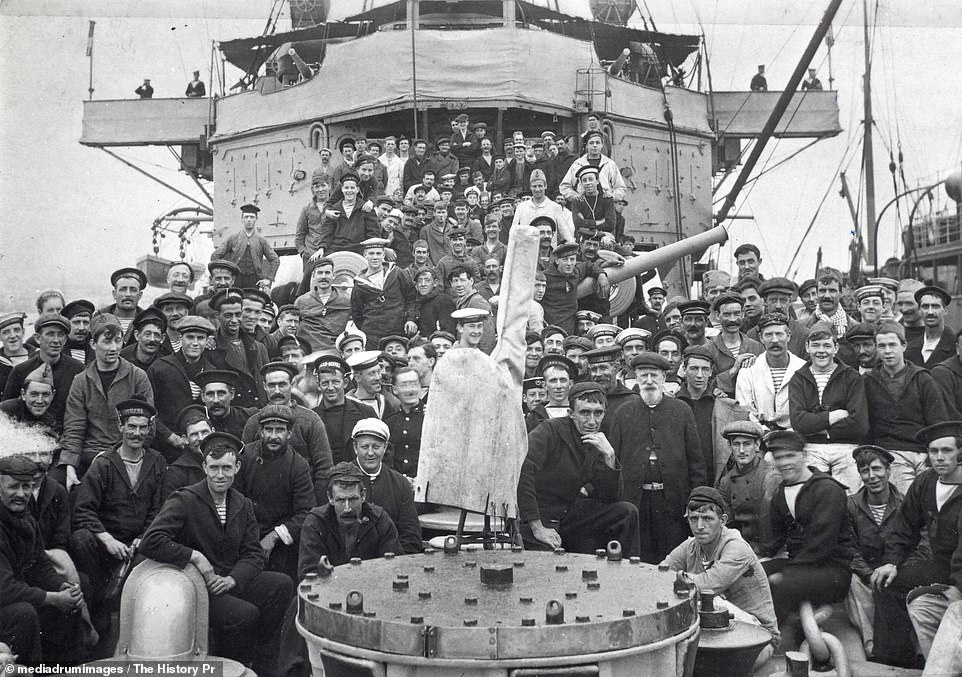 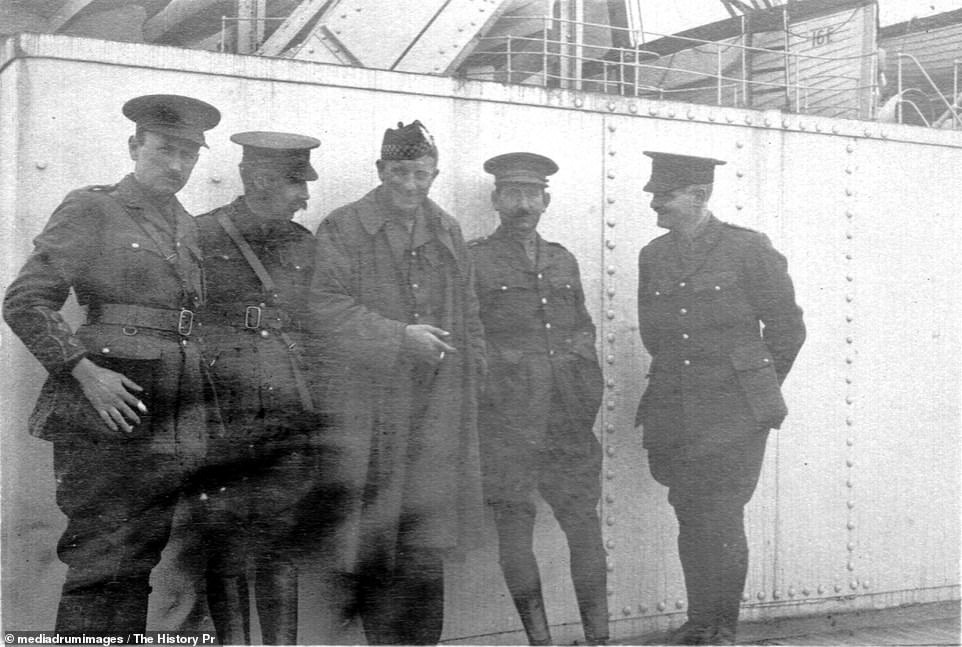 Soldiers shown standing together on board the ship as it sails back to the UK. It managed six voyages before sinking

Captain Charles Alfred Bartlett sped up the ship in an attempt to beach it before conceding defeat and ordering everyone to evacuate. Private Holmes Breslford claims to have been the last man on board the ship before it sank 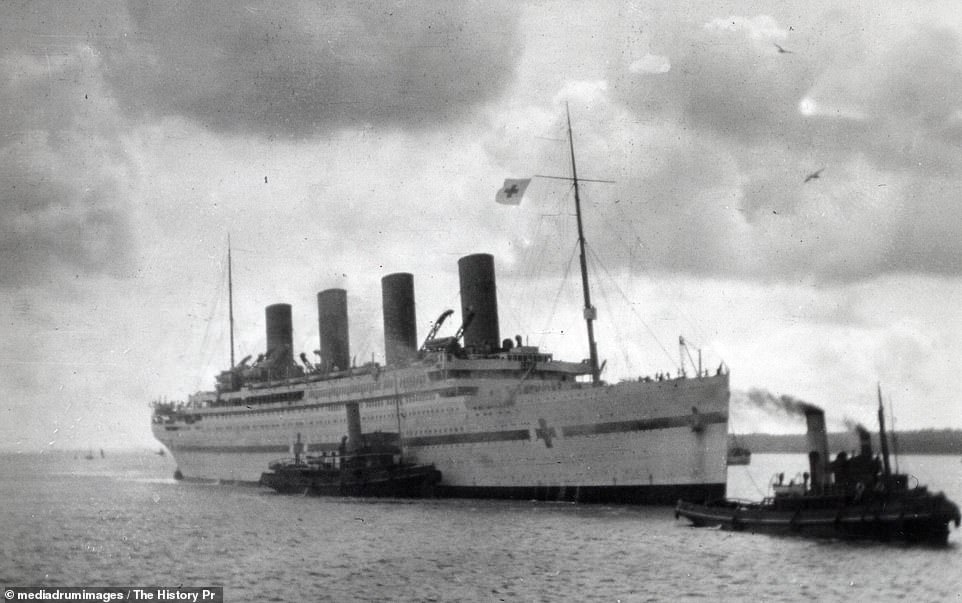 The Britannic is pictured above arriving in Southampton carrying wounded soldiers. It had crosses painted on it so that it was not targeted by the German military 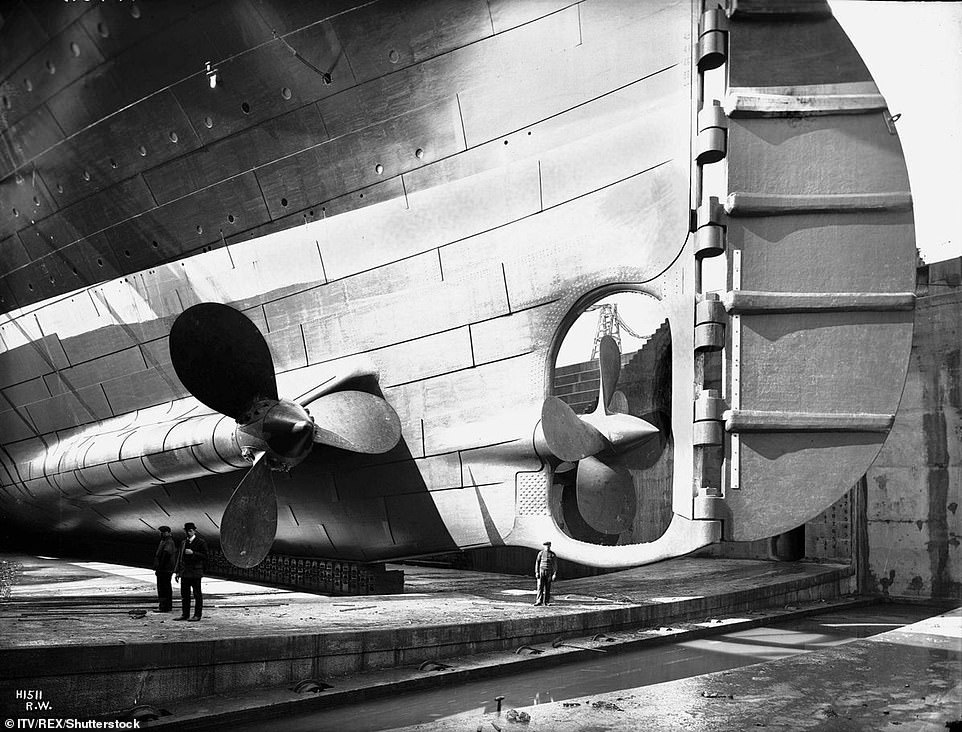 The Britannic’s propellers and rudder are pictured at the shipyard before it was launched in 1915. The ship never served commercially, as intended, but was immediately conscripted into the First World War

From shipyard to seafloor in two years: Timeline of the HMHS Britannic

The Britannic was the last of three ships ordered by the White Star Line as luxury cruisers that were meant to ply the transatlantic route.

After her sister the Titanic sunk in April 1912 the design was changed to make the vessel safer. However, it sunk four years later after hitting a mine.

14 April, 1912 – The Titanic sinks in the Atlantic ocean, prompting changes to the Britannic’s design to include more life boats.

13 November, 1915 – The ship is requisitioned by the military for collecting wounded troops from Lemnos, Greece. It never saw commercial service

23 December, 1915 – Britannic begins first voyage from Liverpool to Lemnos, via Naples, and back, to collect 3,300 casualties. She completes two more voyages.

June to August, 1916 – It is released from service for two months before being requisitioned again

12 November, 1916 – Britannic departs Southampton for Lemnos on its sixth voyage.

21 November, 1916 – The ship hits a landmine two miles from Kea island, Aegean Sea, and sinks. As many as 1,030 people are saved from the floundering ship. Only 30 people lost their lives.

Captain Charles Alfred Bartlett, 43, was one of the most experienced skippers working on the vessel as it sunk – and was even involved with fitting out the Titanic.

He initially ordered for the engines to speed up, in an attempt to beach the boat, after they hit a landmine before conceding defeat realising this was causing water to rush in. The engines were stopped and the ship was evacuated.

Mr Mills said that, for her time, the Britannic was very much not a normal ship.

‘True, she was Titanic’s sister ship,’ he said, ‘but seeing Britannic in her own unique context means we find a vessel that never served in the capacity for which she was designed.

‘(However), as a military hospital ship in one of the most destructive wars ever, she played a vitally important supporting role in some of the most significant Allied campaigns during the First World War.

‘The names of the thirty dead were all but lost in the mists of time, and as the first real book on Britannic was not published until more than three-quarters of a century after her loss, it is amazing that we now know as much about the ship today as we do.’

The Britannic’s wreck, discovered by Jacques Costeau in 1975, is more accessible than her sister ship and in better condition.

She is 400-feet below the surface, compared to the Titanic’s two-and-a-half miles, and lies on her starboard side in one piece, while the Titanic’s wreck was split in two.

In February this year the Greek government considered relaxing legislation preventing visits to wrecks dated between 1860 and 1970, allowing visitors to go to the shipwreck.

The Britannic is too far underwater for most divers but experienced technical divers will be able to reach the wreck. Diver Carl Spencer, 37, died in 2009 from decompression sickness after undertaking an authorised visit to the vessel.

Other vessels that could become accessible due to the legislation change include a three-engines Luftwaffe plane off the coast of Paros, a World War Two British submarine and others. 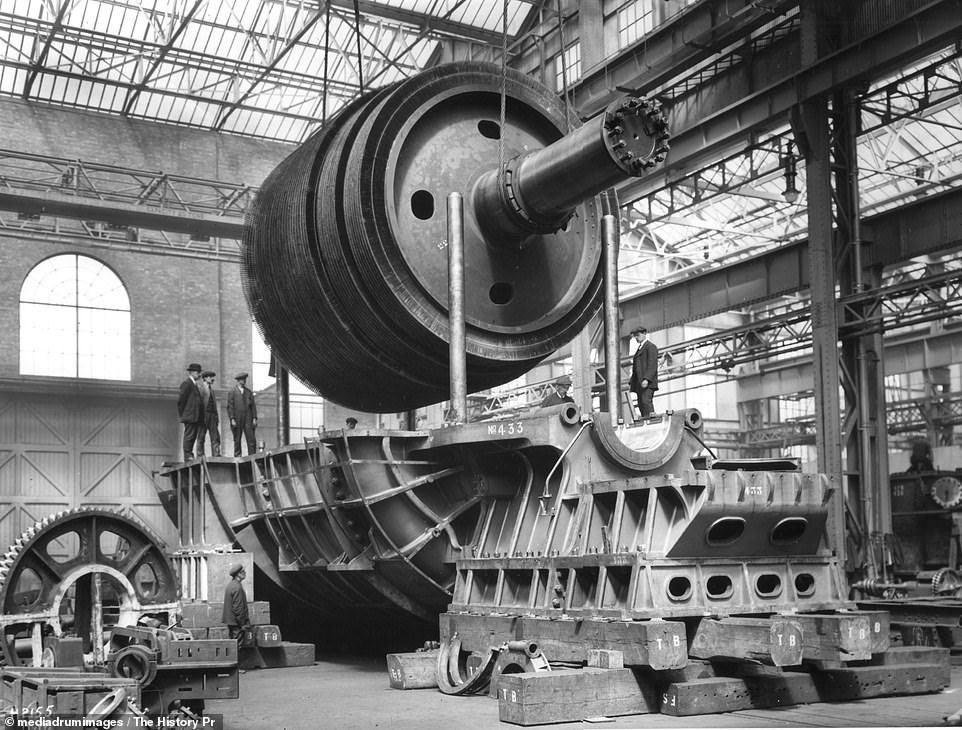 Ship is twinned with the Titanic and Olympic. It was constructed by Harland & Wolff in Northern Ireland for the White Star Line 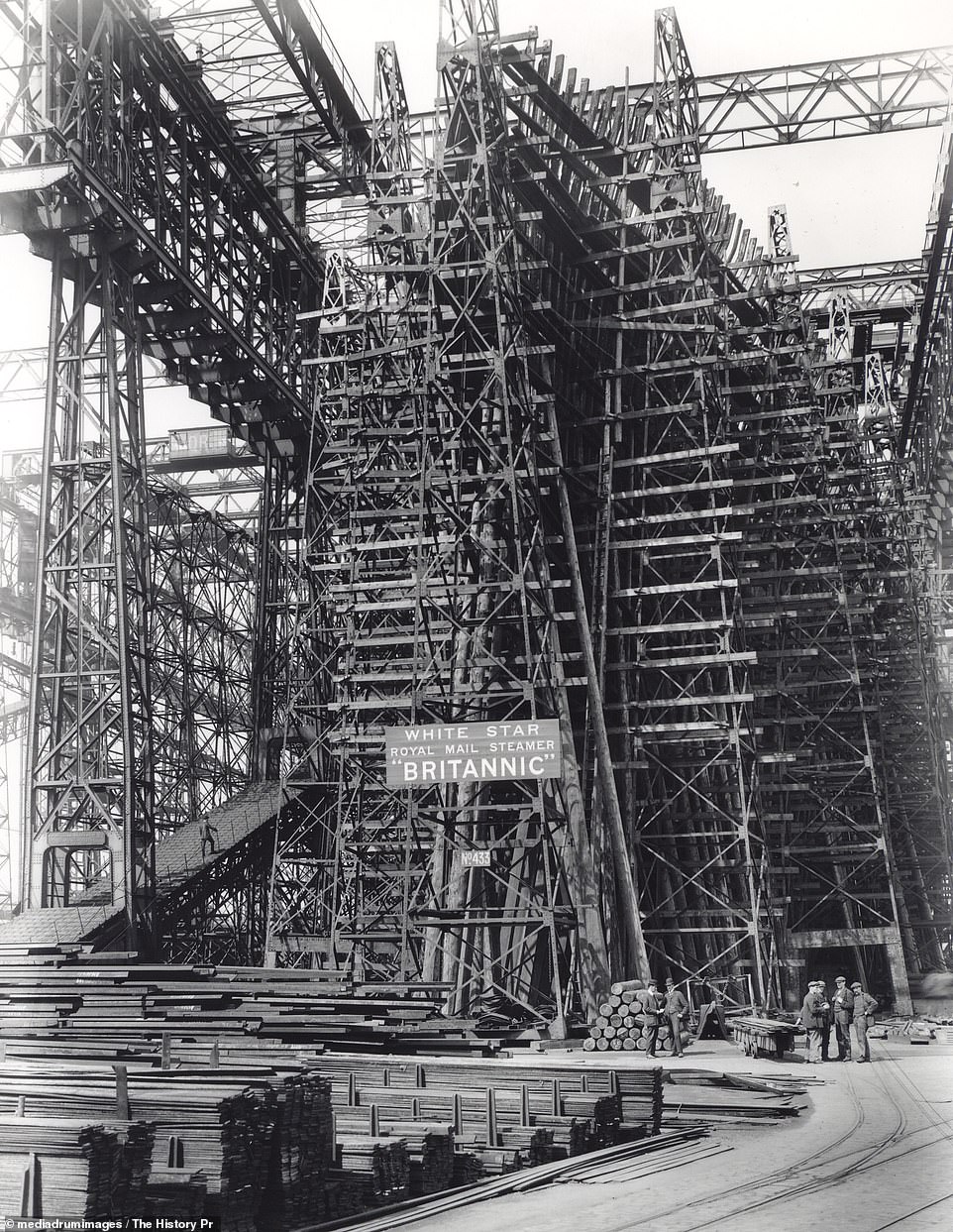 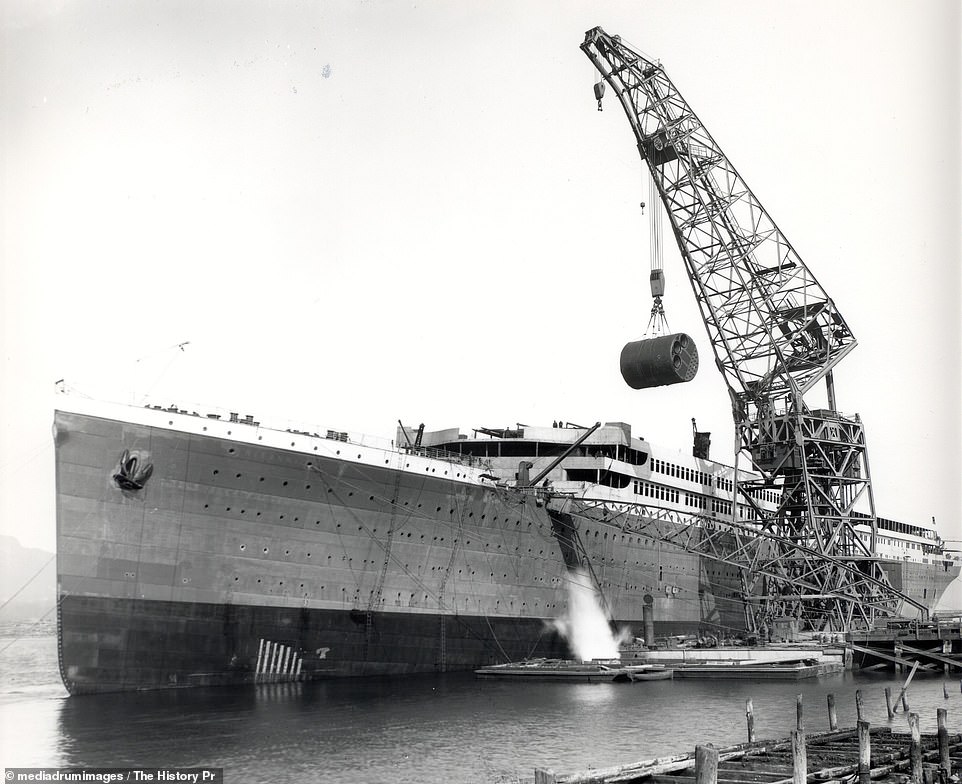 A crane is shown above lowering a massive boiler into the vessel, which would keep the engines moving at speed. The design of the Britannic was tweaked after the Titanic floundered at sea in April 1912 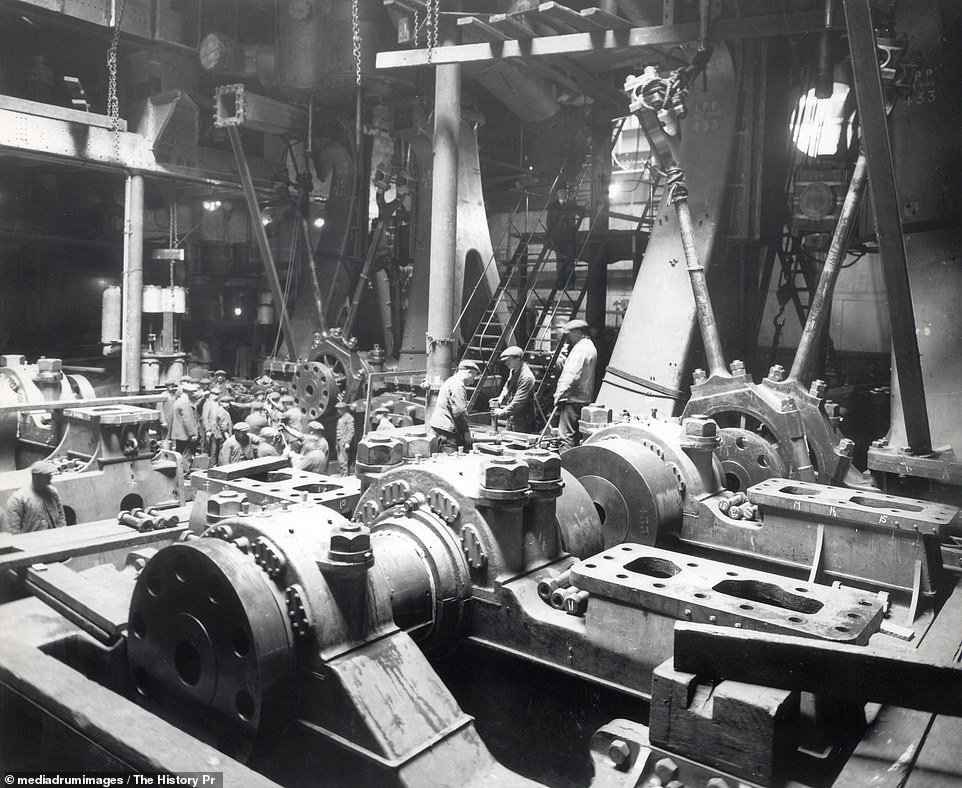 The engine room pictured inside the HMHS Britannic. Only 30 people died when the ship floundered in the Aegean Sea 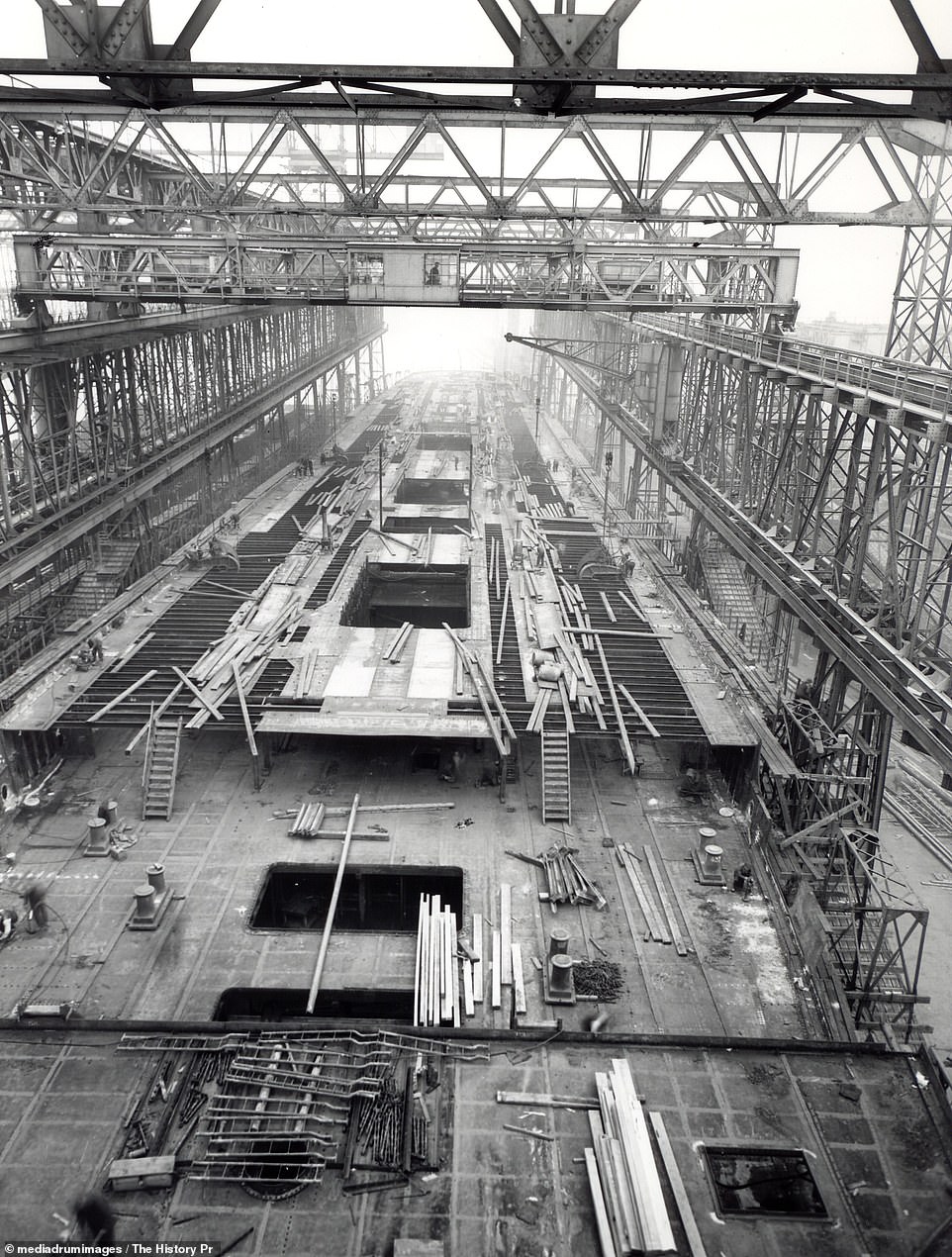 Shown above are the decks of the HMHS Britannic as it started to take shape at the shipwrights in Belfast, Northern Ireland

Britannic is one of three ships, its sisters being the Olympic and Titanic. They were built by Harland & Wolff for the White Star Line shipping company and were dubbed Olympic class ‘unsinkable’.

The Olympic was the only one not to disappear beneath the waves and was retired from service in 1935 and scrapped.

Britannic’s construction was altered after the sinking of the Titanic to make safety adjustments including the provision of more lifeboats and ability to deploy them rapidly. It is the largest of the three ships. 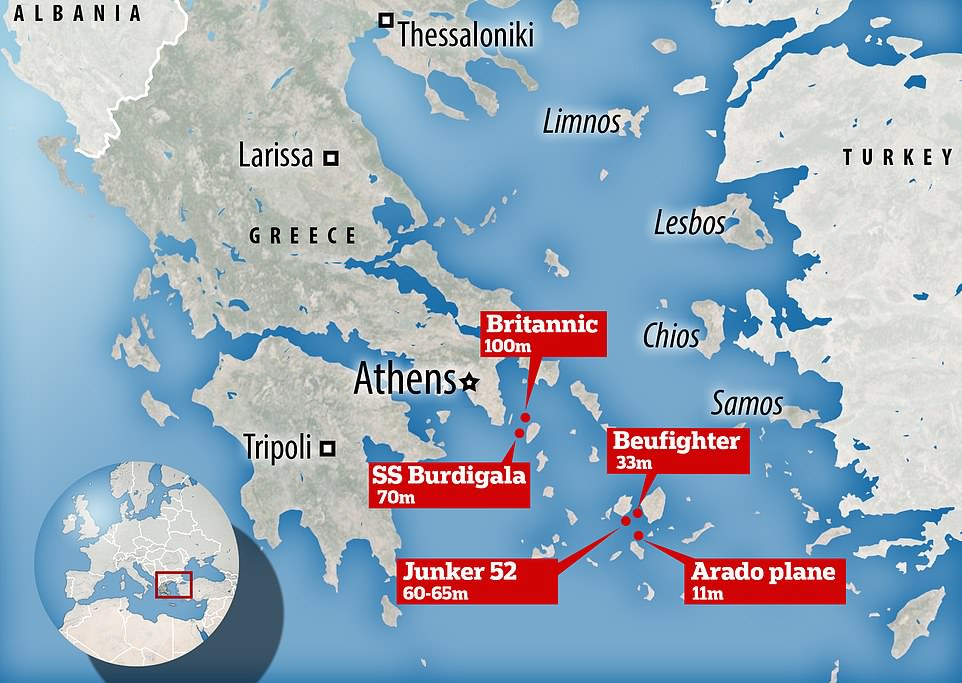 A range of wrecks would be freed up for exploration if the legislation is passed. including Britannic, a WWII German plane and an Allied submarine 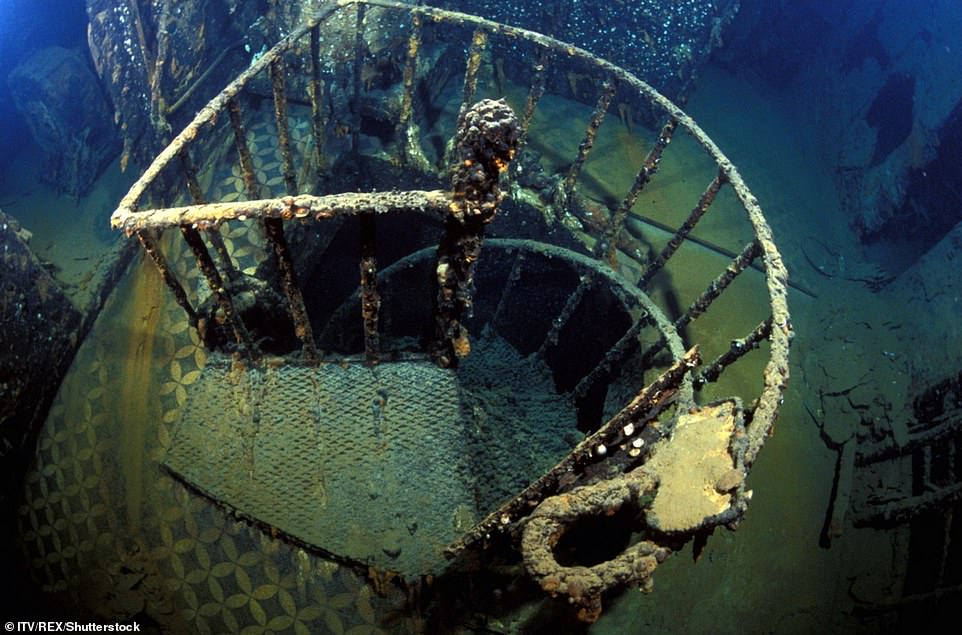 The ship now lies on her starboard side 440-feet beneath the ocean. This is too deep for most, and can only be reached by experienced divers. Above is the ship’s firemans staircase as seen from above the vessel 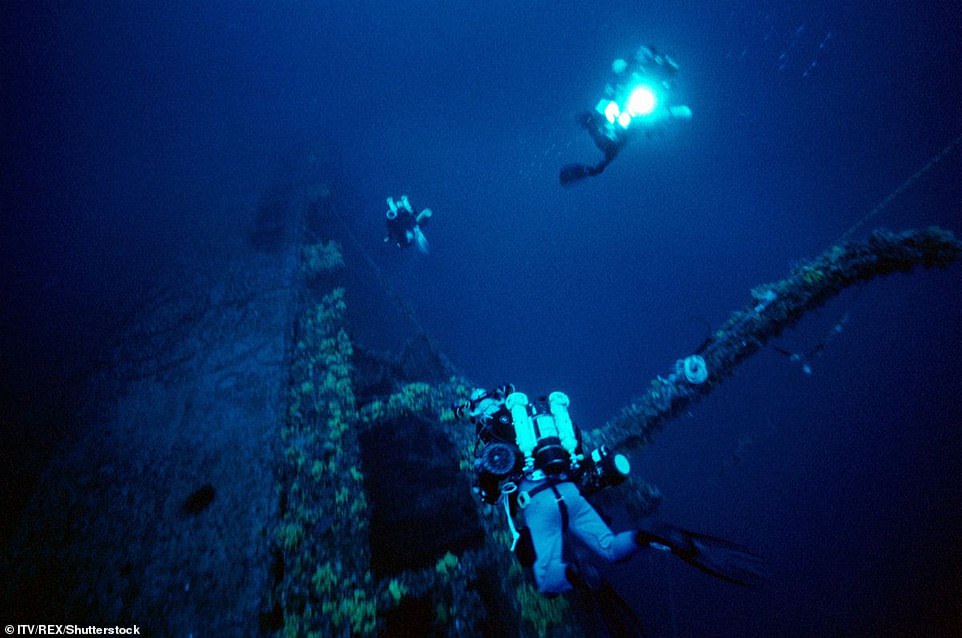 Experienced divers are pictured here exploring the side of the vessel. The Greek government requires explorers to get a special permit before visiting such wrecks. However, this year it considered relaxing the restrictions 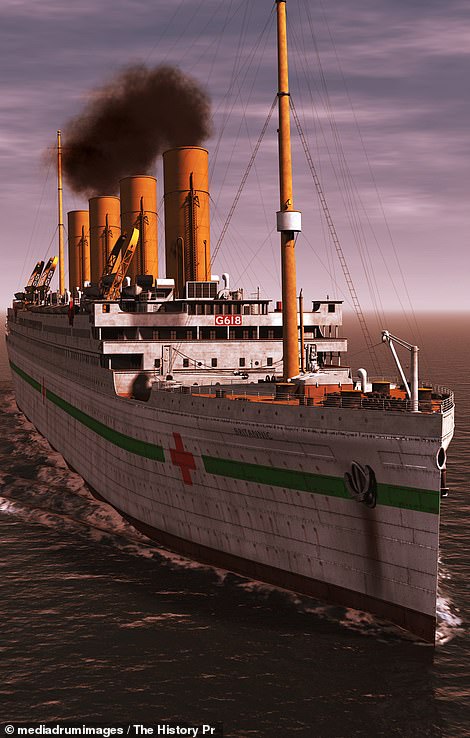 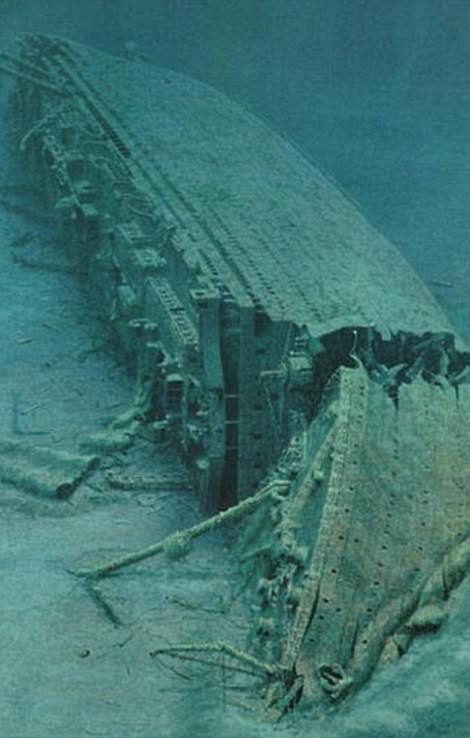