An Idaho frat house that may have been the last stop out for a couple who were killed alongside two roommates in a nearby home does not have security cameras, an official there says.

Reed Ofsthun, president of the Sigma Chi chapter at the University of Idaho, told reporters on Tuesday that the fraternity is cooperating fully with police regarding the November 13 murders.

The Moscow Police Department said earlier it is probing the movements of victims Ethan Chapin and Xana Kernodle, who visited the frat house, where Ethan was a member, hours before the murders.

Police believe Ethan and Xana visited the Sigma Chi house from about 9pm on November 12 until around 1.45am, when they returned to Xana’s off-campus home, just a brief walk away, where the murders took place.

Ofsthun confirmed he had known Xana as a friend, and that Ethan was a member of the frat. He said there were no cameras in the Sigma Chi house that might aid the investigation.

Ethan and Xana, 20-year-olds who who were dating, were stabbed to death along with Xana’s roommates Kaylee Goncalves and Madison Mogen, both 21, in the home they shared, likely while they were sleeping. Police still have no suspects and no murder weapon.

Earlier appeals to the public had focused on Kaylee and Madison’s activities on the night of the murders, which involved stops at a sports bar and a food truck.

The Moscow Police Department said on Monday it is probing the movements of victims Ethan Chapin and Xana Kernodle (together above), who visited Ethan’s fraternity house hours before the murders 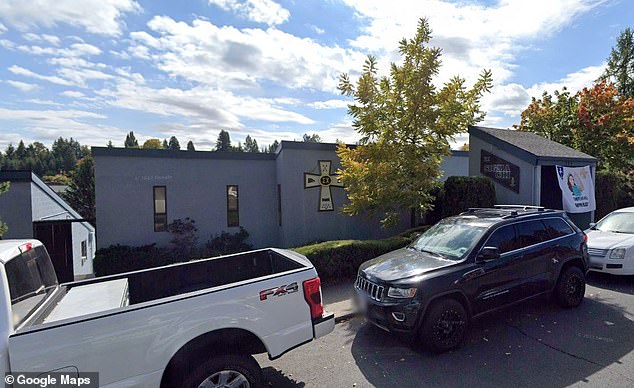 Police believe Ethan and Xana visited the Sigma Chi house (above) from about 9pm on November 12 until around 1.45am, when they returned to Xana’s home 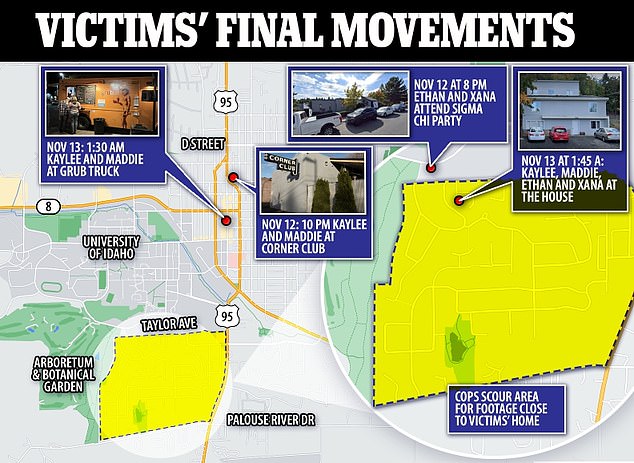 ‘That actually seems to be one of the larger areas that we don’t have a lot of information in,’ Idaho State Police communications director Aaron Snell told Good Morning America of Ethan and Xana’s movements on November 12.

‘So being able to locate what they did that night, to maybe who they contacted, maybe any routes they took home, that would be important to the investigation,’ he added.

Meanwhile, tensions grew further between investigators and the families of the victims, who have spoken out in frustration about the failure to identify a suspect.

Kaylee’s father Steven previously told NewsNation’s Brian Entin that police had told him her injuries were worse than the other victims’, but he didn’t go into detail.

Moscow Police contradicted that remark in their new statement, saying: ‘With the active criminal investigation, law enforcement has not released additional facts to the family or the public.’

‘There have been statements and speculation about this case, victim injuries, cause of death, evidence collection and processing, and investigative techniques,’ the statement added.

‘However, we firmly believe speculation and unvetted information is a disservice to the victims, their families, and our community,’ it continued, echoing a refrain from prior statements as the small-town department leading the investigation has come under increasing criticism.

‘The Moscow Police Department is committed to providing information whenever possible but not at the expense of compromising the investigation and prosecution,’ the department said. 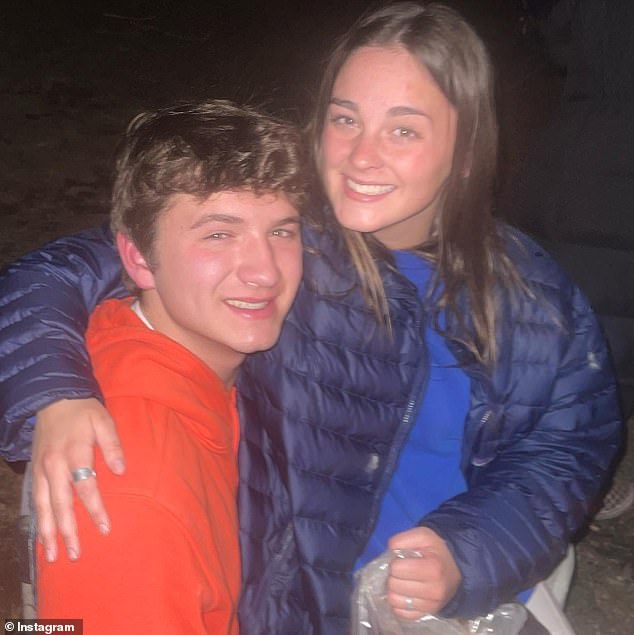 Ethan and Xana (seen above) were killed on the second floor, while the other victims were found dead on the third floor of the house 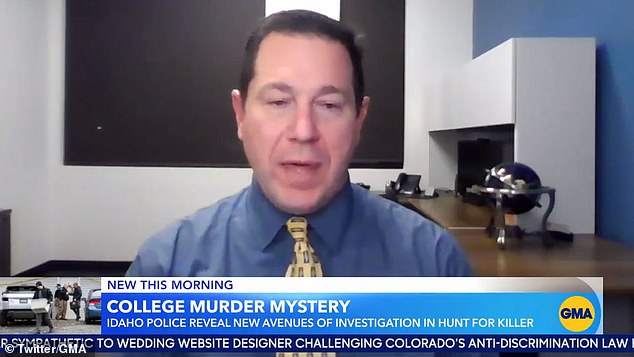 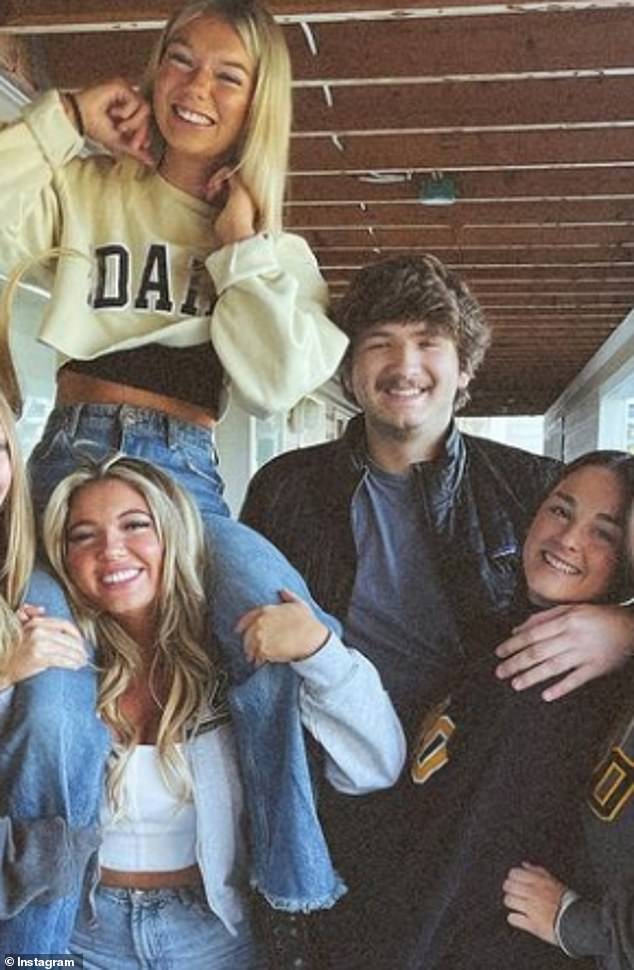 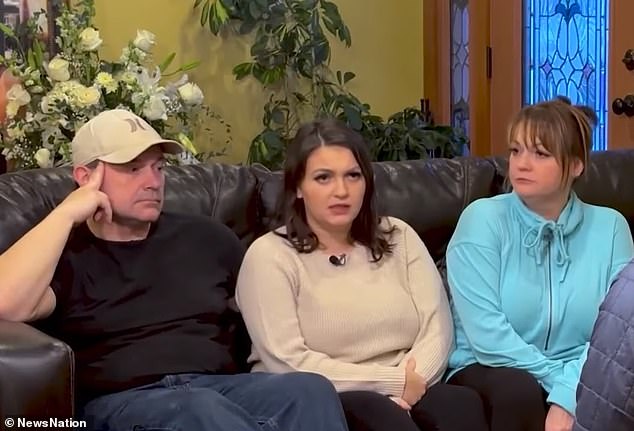 Kaylee’s family (above) previously said they learned that her injuries were worse than the other victims’. The family say they are tired of waiting for answers from the cops in Moscow 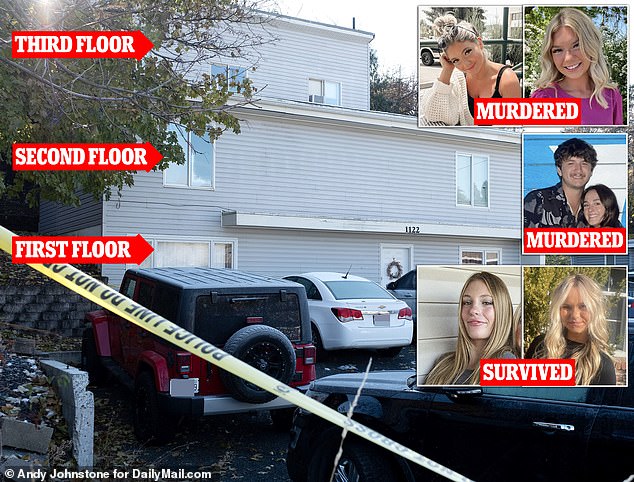 Police also said they looked into the theory that Kalyee had a stalker, as they continue to search for answers three weeks after four University of Idaho students were murdered at their off-campus house on November 13.

Police said that in mid-October, two males appeared to follow Kaylee inside the local Moscow business and then followed her out to her car, but made no contact.

After speaking with the two males, police determined it to be an isolated incident and said there was no evidence to suggest they were involved in the murders.

The male turned away from her, and it did not appear he made any contact with her, police said. Police did not say what business the incident occurred at.

Police contacted both males and learned that the two were attempting to meet women at the business, which was corroborated through additional investigation.

Police also revealed on Monday that there was no evidence found on Goncalves’ dog Murphy, who was found at the scene. It has not yet been determined what room the dog was in when the murders took place. 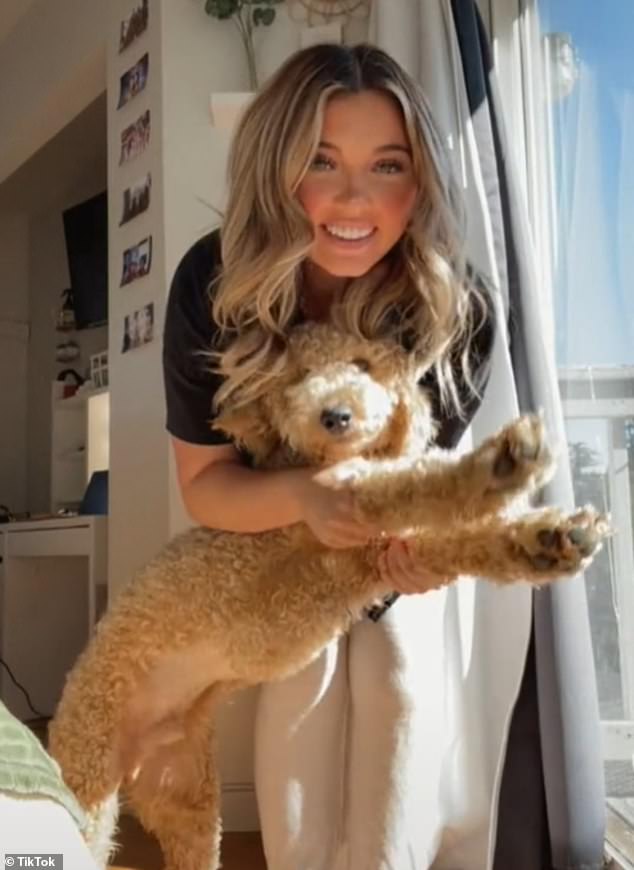 Idaho police now say there was an incident at a local business which involved the stalker Kaylee Goncalves mentioned just a month before she was stabbed to death in her home. They also revealed that Murphy, her dog, was inside the home but did not have any evidence on him 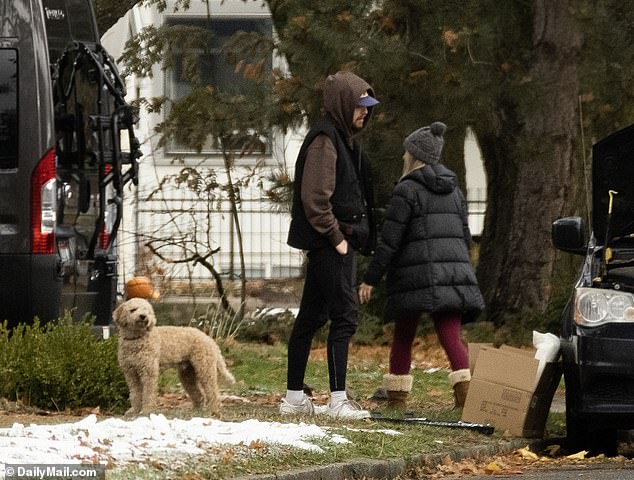 Kaylee’s dog Murphy (pictured) which had been at the home at the time of the murders and was found unscathed, is now living with her boyfriend Jack DuCoeur

‘During the search of the home, a dog was found in a room where the crimes had not been committed,’ according to the release.

‘Officers did not find any evidence on the dog and there was no indication the animal had entered the crime scene. The dog was taken to Animal Services and released to a responsible person.’

Three weeks after the grizzly murders, few answers have come out and authorities have yet to name a suspect or even a person of interest in the case.

Two other roommates were in the house but were unharmed and unaware the attack occurred. They were sleeping on the first floor.

Detectives have sifted through more than 2,645 emailed tips, 2,770 phone tips, and 1,084 digital media submissions, according to the most recent update.

‘We believe someone has information that will add context to the picture investigators are creating of what occurred that evening,’ Moscow police said in a statement on Monday.

‘Our focus is the investigation, not the activities. Your information, whether you believe it is significant or not, might be one of the puzzle pieces that help solve these murders.’

He confirmed investigators have gathered enough evidence to suggest the killings were targeted, but admitted they are still no closer to identifying the murderer.

The update on Monday stated: ‘We have not changed our belief that the murders were a targeted attack. However, investigators have not concluded if the target was the residence or its occupants.’

Autopsies determined the four students were stabbed to death, likely with a fixed-blade knife, and investigators checked with local stores to see if any had sold military-style knives recently.