While sharks are deadly marine predators, they also seem to attract fish looking for a ‘spa day’ by rubbing against their rough skin.

Drone footage recorded by marine biologists at the University of Miami captured frequent incidents of the surprising ritual.

Researchers pored over underwater video, photos, drone footage, and even witness reports to find 47 different instances of fish rubbing up against a shark’s body at more than a dozen locations around the world.

The length of these regimens varied from eight seconds to more than five minutes, and included dozens of incidents of leerfish, also known as garrick, rubbing up against a great white shark, the ultimate oceanic apex predator, in Plettenberg Bay, South Africa.

The number of fish chafing against a particular shark varied, too, from one lone swimmer to over 100 at once.

‘Although instances of fish chafing against sharks have previously been observed, this study finds this cross-species behavior to be more pervasive than previously understood,’ according to a statement from the school.

Dozens of leerish rub up against a deadly Great White Shark in South Africa, using its sandpaper skin to exfoliate. Researchers at the University of Miami have determined the undersea spa day is fairly widespread around the world

Published in the journal Ecology, the study was undertaken by the University of Miami’s Shark Research and Conservation Program at the Rosenstiel School of Marine and Atmospheric Science.

‘We suspect that chafing against shark skin might play a vital role in the removal of parasites or other skin irritants, thus improving fish health and fitness.’

The sharks seem fairly unbothered by the routine in the video footage, making no attempt to snack on their ‘clientele.’ 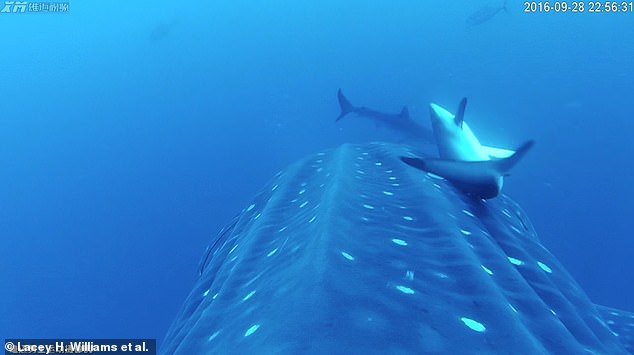 Researchers recorded a dozen fin fish chafing against eight different species of shark, with encounters lasting from a few seconds to up to five minutes. Pictured: Silky sharks chafing on the head of a whale shark

‘While chafing has been well documented between fish and inanimate objects, such as sand or rocky substrate, this shark-chaffing phenomenon appears to be the only scenario in nature where prey actively seek out and rubs up against a predator,’ said co-author Lacey Williams, a graduate researcher at the Rosenstiel School, said in the statement. 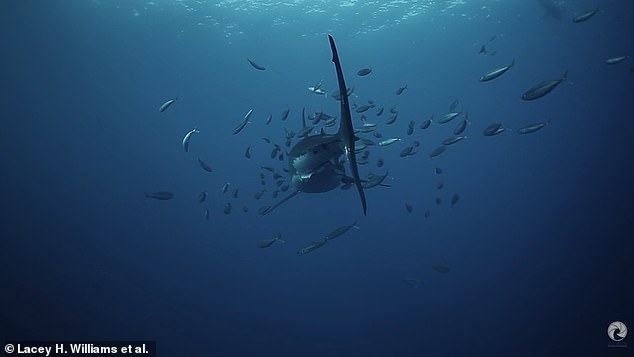 ‘We suspect that chafing against shark skin might play a vital role in the removal of parasites or other skin irritants, thus improving fish health and fitness,’ said study co-author Neil Hammerschlag. Pictured: A great whites shark surrounded by fish in South Africa’s Plettenberg Bay 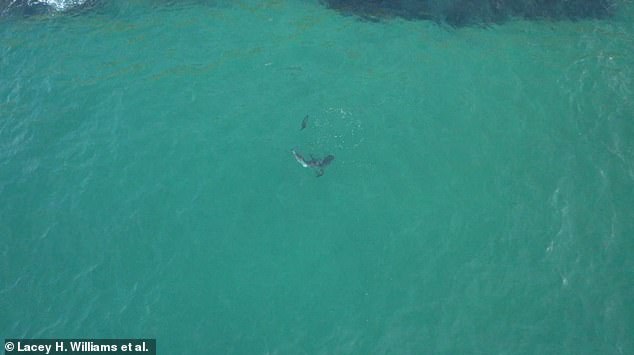 Aerial footage of fish coming to a shark for their spa treatment. The number of fish chafing against a particular shark can vary from one lone swimmer to over 100 at once

Even other sharks get in on the action, with eight-foot silky sharks exfoliating against massive whale sharks, which can reach more than 60 feet in length.

Adventurous humans have been known to get pedicures by letting tiny garra rufa fish nibble at hard skin on the soles of their feet, but this underwater spa treatment appears to be mutual.

Researchers at Wales’ Bangor University observed thresher sharks in the Philippines swimming around schools of fish that happily devoured dead skin and parasites off their skin.

The sharks deliberately lingered in areas of undersea mountains, known as seamounts, and even made return trips, in behavior first observed in 2011.

Marine biologist Simon Oliver, who led the study, said that there was no doubt the sharks were going there for a good scrub.

They ‘systematically’ circle for around 45 minutes at speeds lower than two miles per hour, he said, or half of what they usually move at.

The fish then begin ‘foraging’ on the shark’s body, paying the most attention to their parasite-rich fins and pelvis.

The sharks ‘pose, lowering their tails to make themselves more attractive to the cleaners,’ Oliver told BBC News at the time.

Without the routine skin treatment, the sharks could get infections and other complications, he added.

‘Our findings underscore the importance of protecting areas like seamounts which play an important part in (the sharks’) life strategy to maintain health and hygiene,’ he said.

But they’re no meek marine animal, either: Growing up to 20 feet long, they mainly feed on schools of bluefish, tuna and mackerel, which they follow into shallow waters and stun with their long tails.