A long-delayed flood barrier successfully protected Venice from a high tide for the first time today – seeing off threats the historic city could be submerged.

‘Today, everything is dry. We stopped the sea,’ city mayor Luigi Brugnaro told reporters after raising a glass in celebration with some of the engineers and officials responsible for the multi-billion euro project known as Mose.

‘Lots of bad things have happened here, but now something wonderful has happened,’ he said.

The barriers of the Mose system, which protects the city of Venice and the Venetian Lagoon from flooding, are emerged out of water, for the first time, in Venice, Italy today 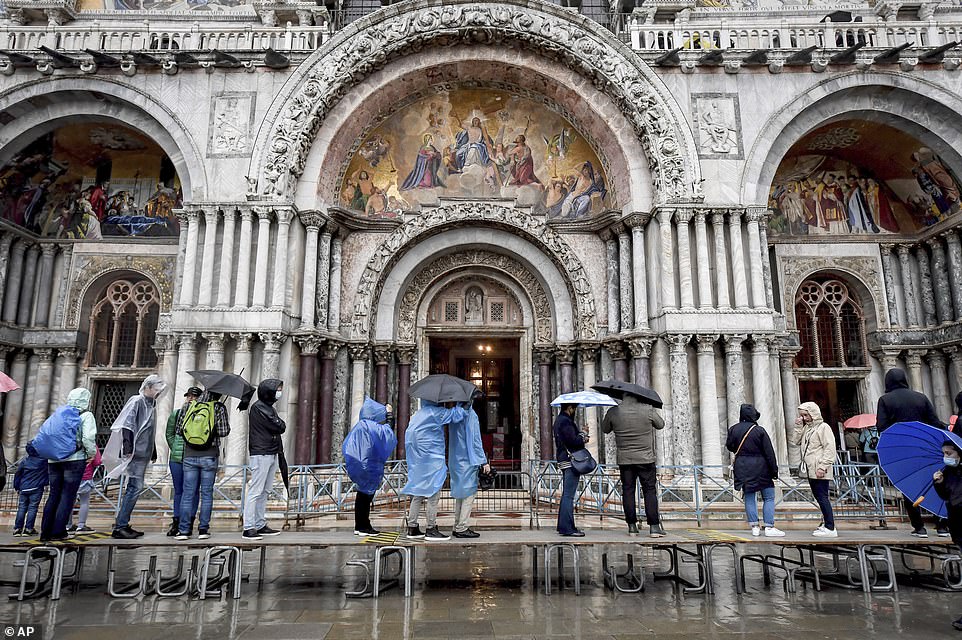 Visitors stand on a trestle bridges as they admire St. Mark’s Basilica during an expected high water, in Venice, northern Italy today 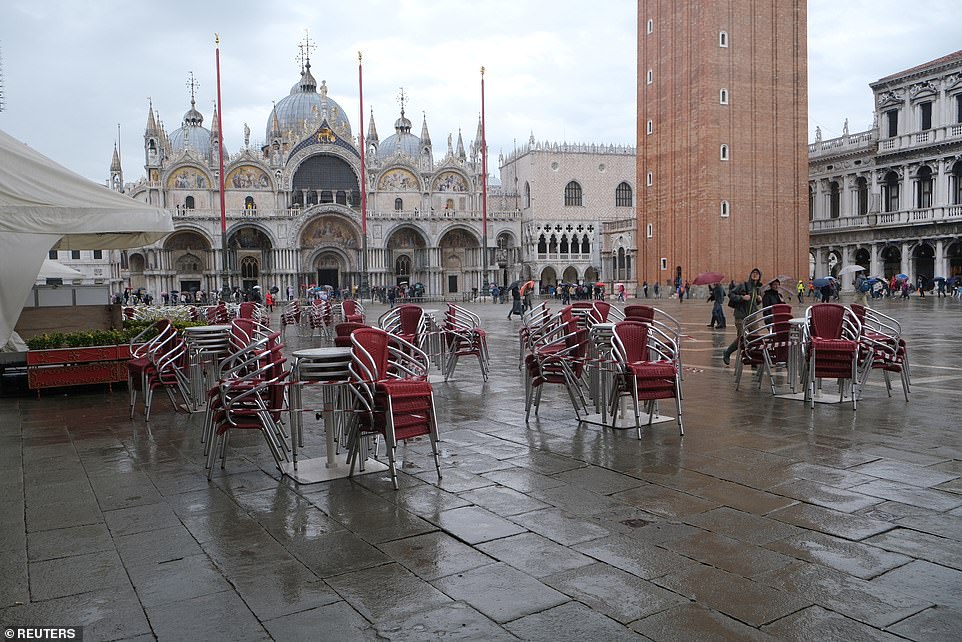 Stacked chairs are seen at St. Mark’s Square during high tide as the flood barrier scheme MOSE is used for the first time in Venice, Italy today 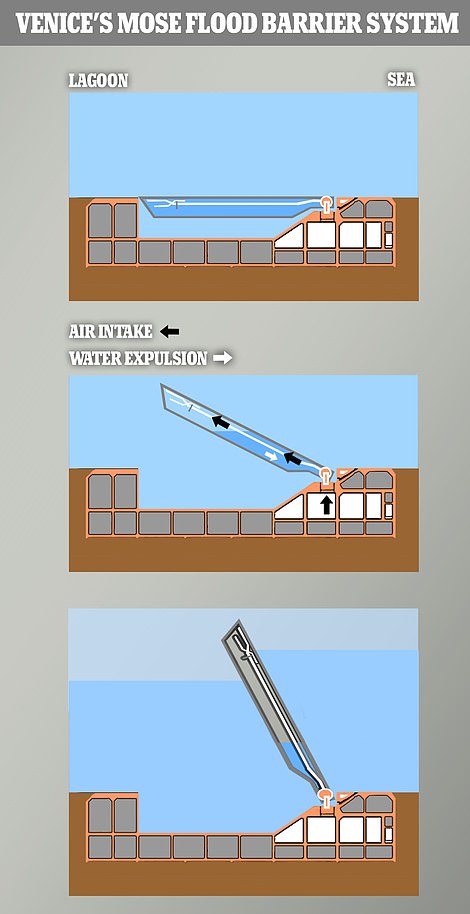 Pictured: The operation system of the Mose flood barrier

The network of 78 bright yellow barriers that guard the entrance to the delicate Venetian lagoon lifted from the sea bed as the tide, driven by strong winds and rain, started to climb.

City officials had forecast a tide of 4.27ft, well below the devastating 6.13ft tide that battered Venice last November, but enough to leave low-lying areas deep under water.

Expecting the worst, workmen had laid out raised walkways in especially vulnerable places, including the often packed St. Mark’s Square. In the event, the tide only amounted to 2.29ft, leaving the city’s piazzas and pathways unscathed.

‘Today is an important day, an historic day because we should have been full of water by now and instead we are dry,’ said Massimo Milanese, manager of the Lavena Cafe in St. Mark’s Square.

The worst floods in more than 50 years left St Mark’s Square submerged under a metre of water last November, underlining the growing environmental threat to one of the world’s most famous cultural sites.

Engineers had promised that Mose would save the day, but sceptics questioned whether the system, plagued by corruption, cost overruns and prolonged delays, would be up to the task.

Venice’s floods, ‘acqua alta’ (high water) in Italian, are caused by a combination of factors exacerbated by climate change – from rising sea levels and unusually high tides to land subsidence that has caused the ground level of the city to sink.

Mose is designed to protect Venice from tides of up to 9.84ft, well beyond current records, and Saturday’s success raised hopes of a bright future for the city, which has suffered from a calamitous fall in tourism due to COVID-19.

‘This is a beautiful day for Venice, which has finally been saved,’ the ruling Democratic Party said in a statement.

Meanwhile, flooding from record rains in the mountainous region that spans France and Italy has killed two people in Italy and left at least 24 people in the two countries missing. 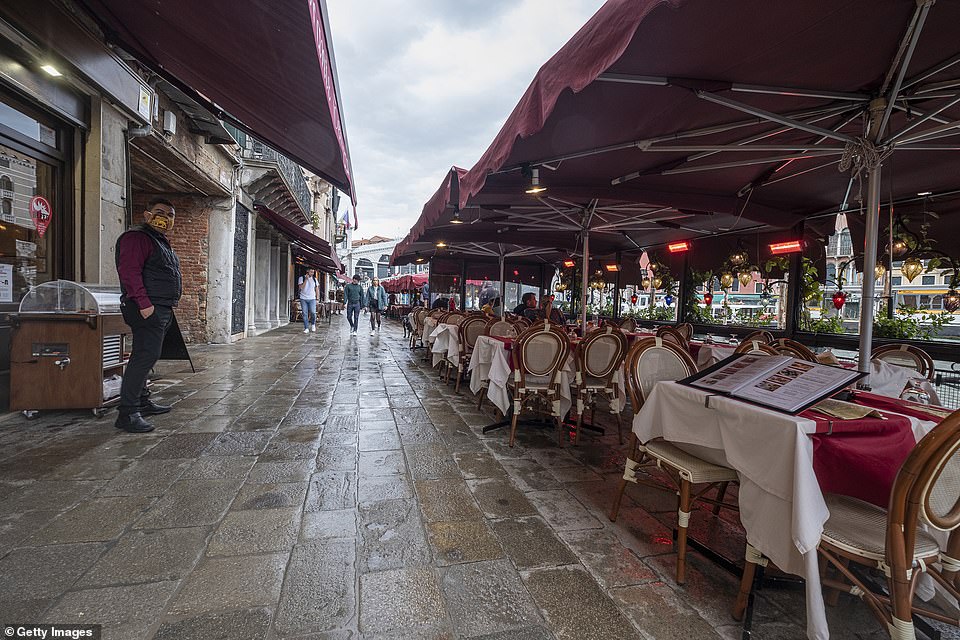 A restaurant now remains open in a location where during high tides it would normally have had to be closed today in Venice, Italy 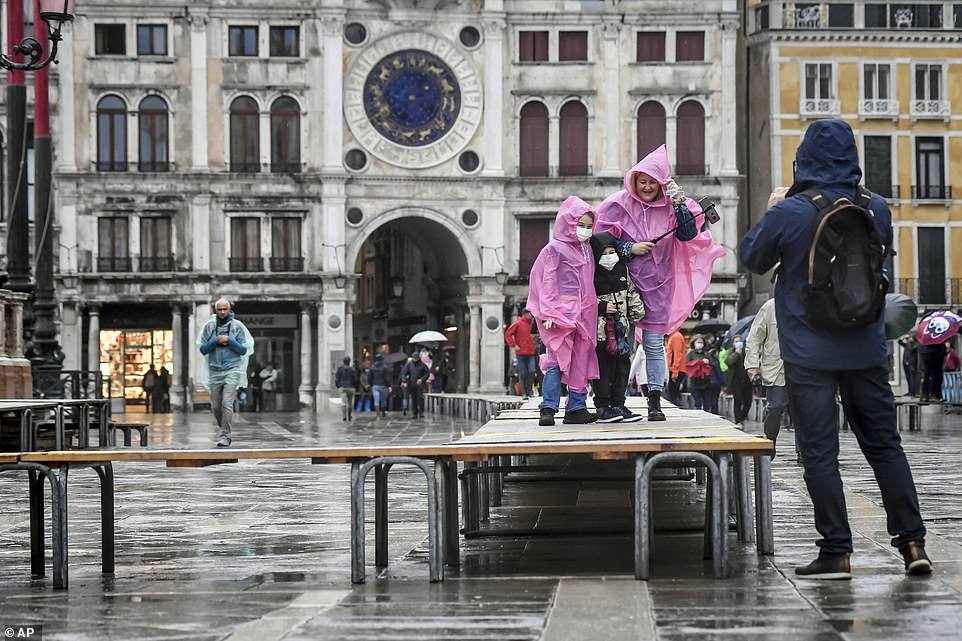 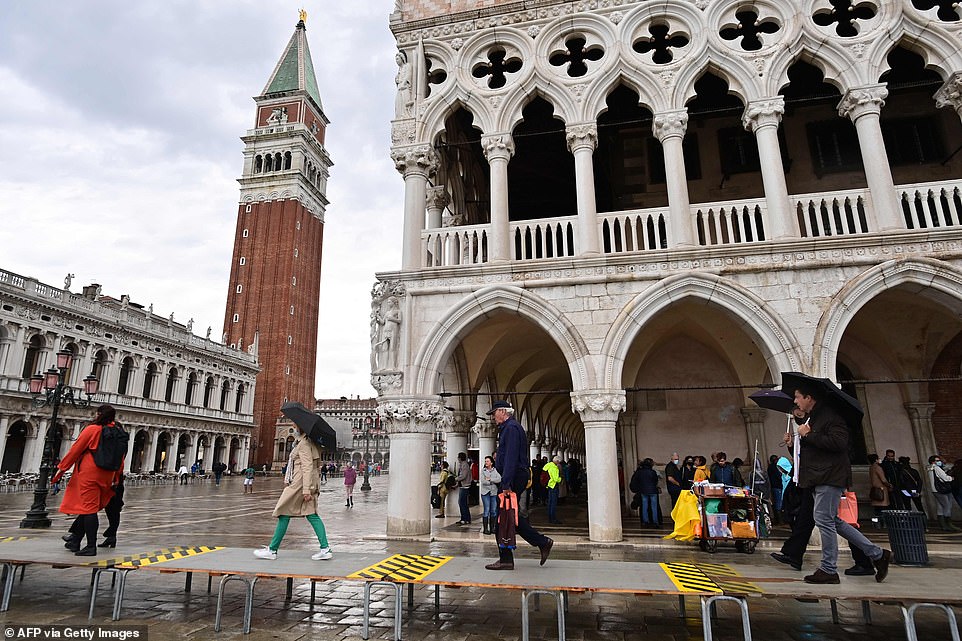 People walk across elevated walkways past the Doge’s Palace by St. Mark’s square in Venice today as a high tide ‘Alta Acqua’ phenomenon is expected, following a peak bad weather and potential intense sirocco winds along the entire Adriatic basin

A storm that moved overnight across south-eastern France and then northern Italy caused major flooding on both sides of the border, destroying bridges, blocking roads and isolating communities.

In Italy, a firefighter was killed during a rescue operation in the mountainous northern region of Val d’Aosta.

Another body was found in Vercelli province, near where a man had been swept away by floodwaters late on Friday.

A total of 16 people were reported missing in Italy, all but one travellers in cars on the Col de Tende high mountain pass between France and Italy, according to civil protection authorities.

They include two people from Germany driving with their 11-year-old and six-year-old grandchildren, and a pair of brothers returning from France.

The spokesman for Italy’s firefighters said a search was ongoing for a missing shepherd who was pulled into floodwaters on Col de Tende. 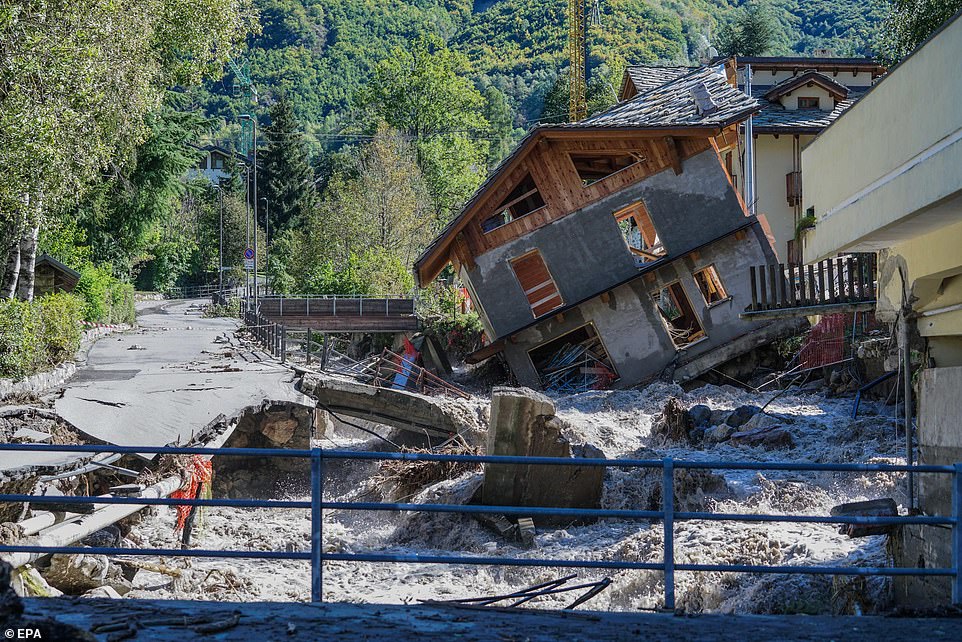 A view on damage after heavy rains in Cuneo, Italy today 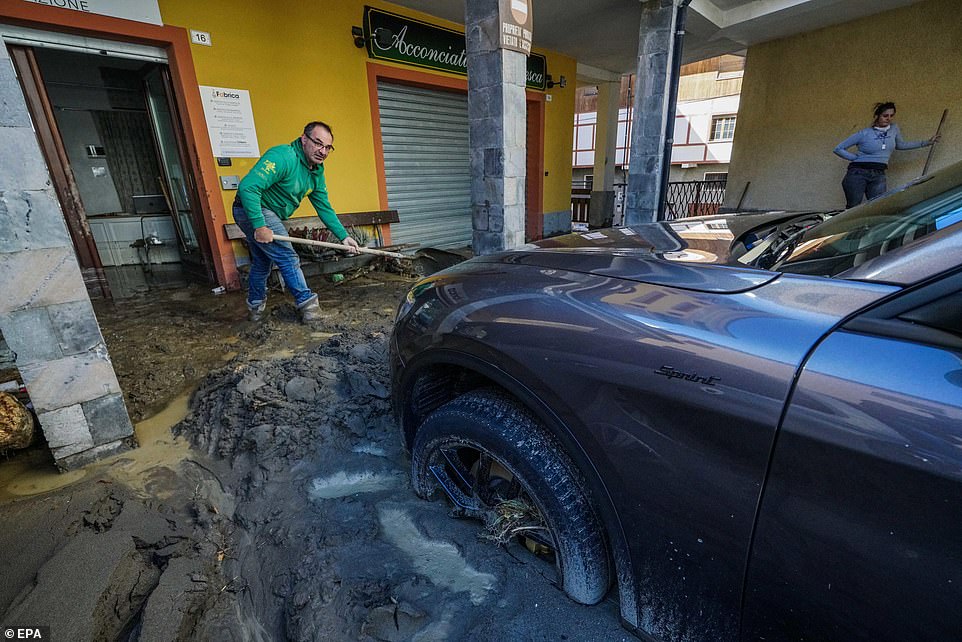 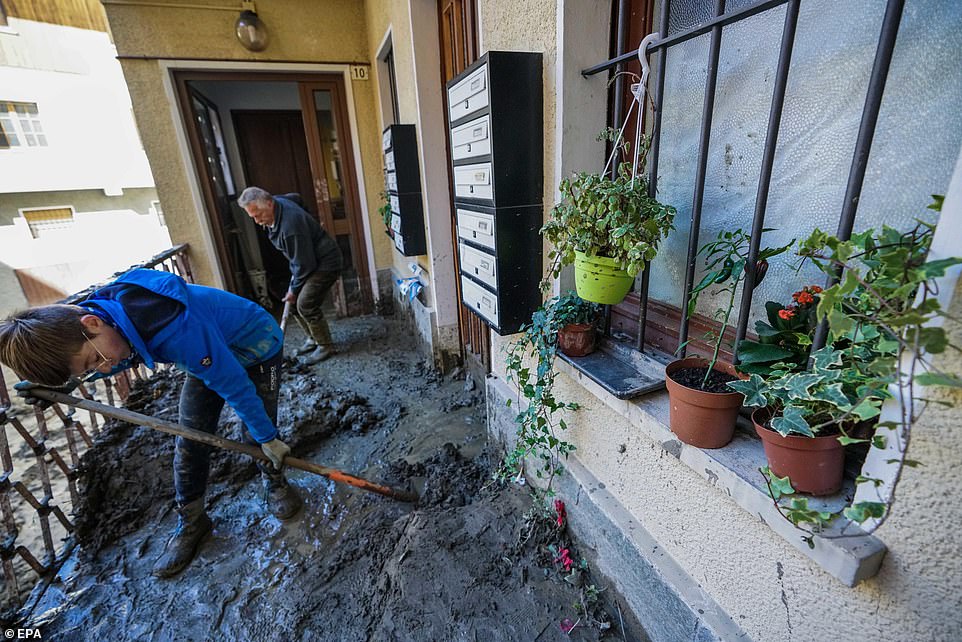 Residents clear mud from the doorway of their home near Cuneo, Italy today 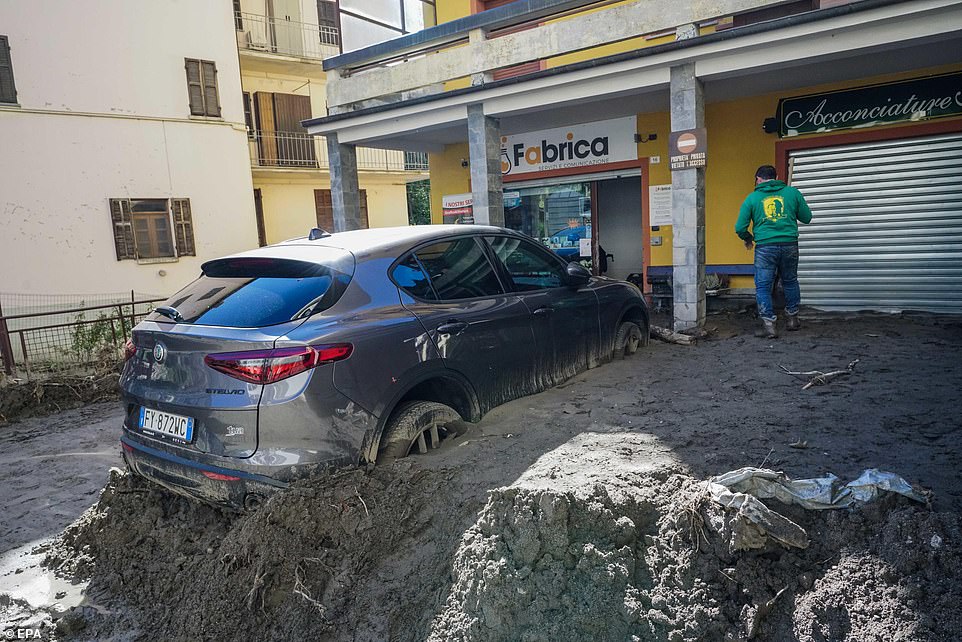 Residents clear mud from the doorway of their home in Cuneo, Italy today 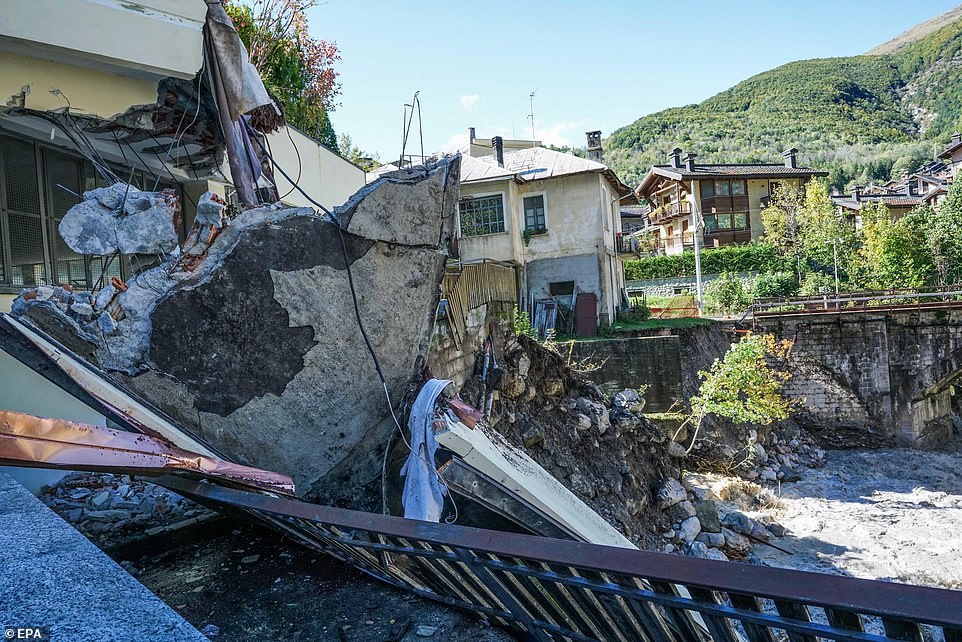 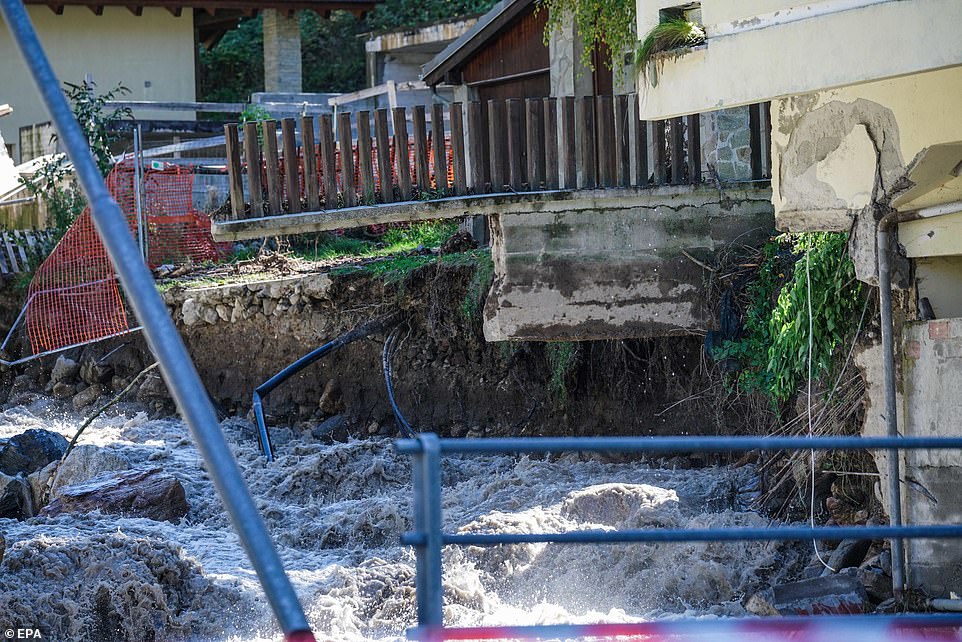 His brother managed to grab on to a tree and was saved, while authorities were searching on the French side for the shepherd.

Firefighter spokesman Luca Cari said he suspects the other people reported missing in Italy have lost phone contact, but at the moment they are not thought to be in imminent danger.

The situation at the tunnel on the high mountain pass is complicated by the fact that French emergency responders cannot access their side due to flood damage, Mr Cari said.

Italian firefighters were searching the French side for people who may have been blocked.

Unrelenting rainfall overnight hit levels not seen since 1958 in northern Italy’s Piedmont region, where as much as 630 millimetres (24.8in) of rain fell in a 24-hour period, according to the Italian civil protection agency.

Hundreds of rescue operations were under way. 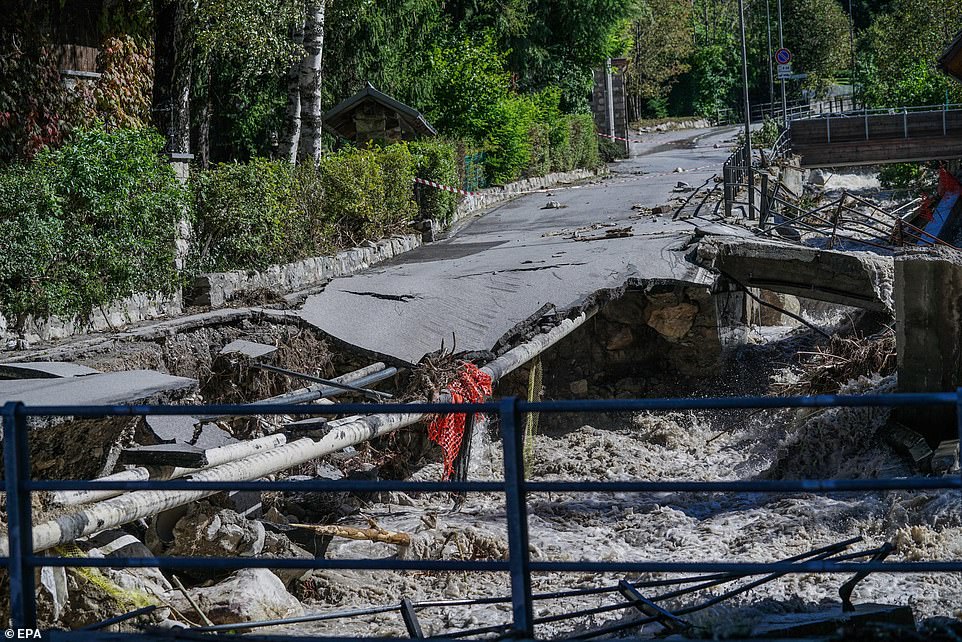 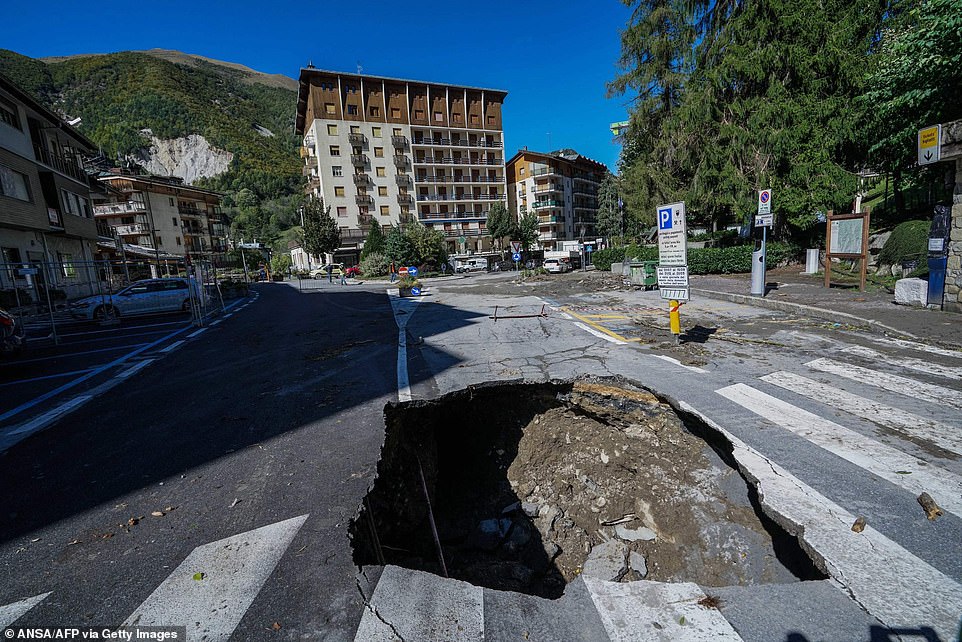 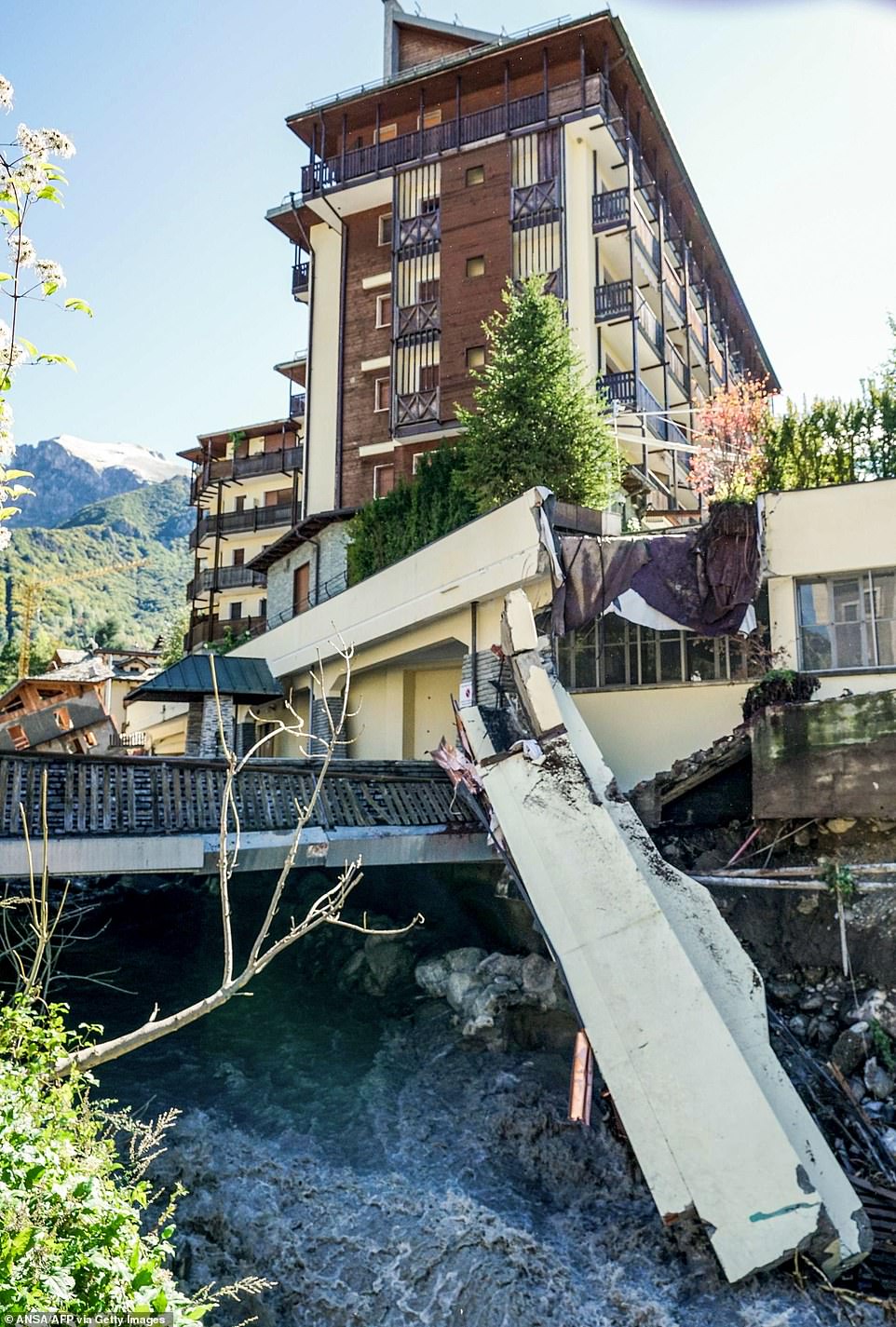 Two people have died and 24 others are listed as missing today after severe flooding across northern Italy and France, officials said following torrential overnight rain

And Alpine rescue squads have evacuated by foot seven people who were in houses cut off by flooding at Terme di Valdieri; some had to be carried on stretchers due to the muddy conditions and accumulation of detritus.

On the other side of the border, in south-eastern France, almost a year’s average rainfall fell in less than 12 hours in the mountainous area surrounding the city of Nice.

Nice mayor Christian Estrosi expressed his ’emotion and sympathy’ for the families.

He said more than 100 homes have been destroyed or severely damaged.

French prime minister Jean Castex, who flew over the area in an helicopter, confirmed that at least eight people were missing, including two firefighters whose vehicle was carried away by water when the road collapsed during a rescue operation. 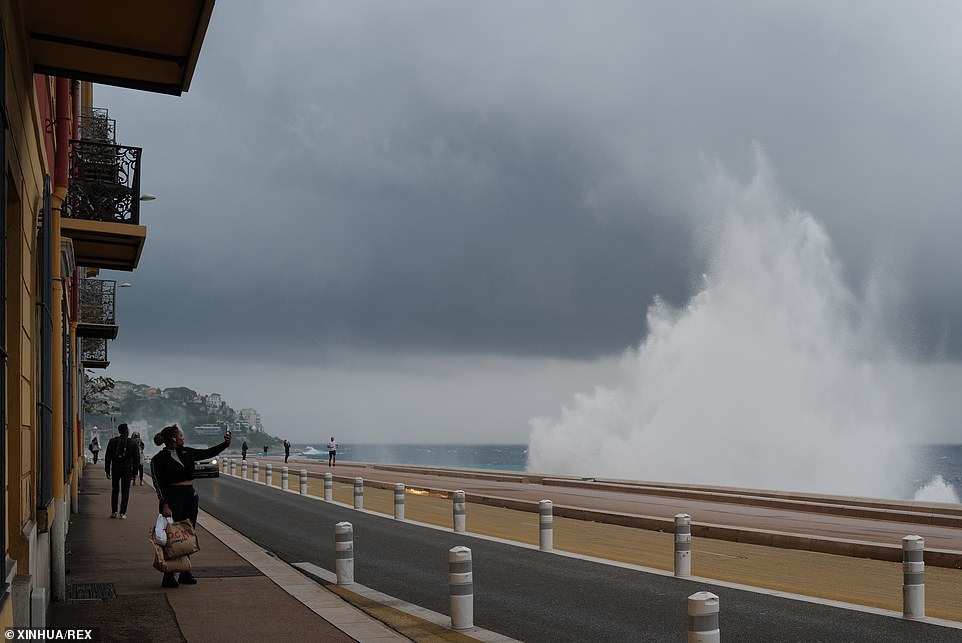 Waves hit the shore near the Promenade des Anglais in Nice, France yesterday 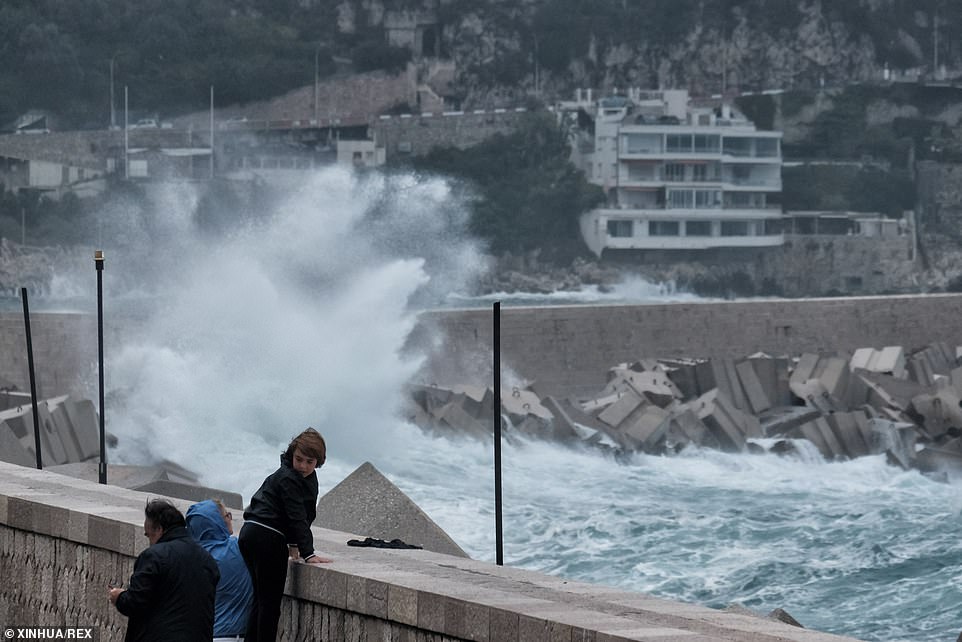 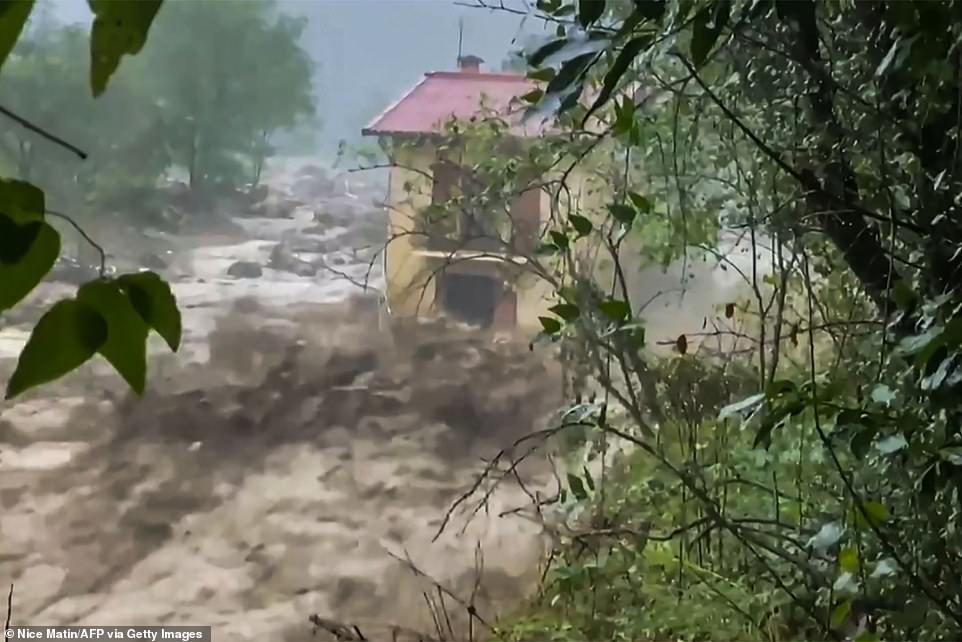 A video grab taken from footage made yesterday shows the house of two elderly people, who sought refuge on the roof, before being washed away by floods in Roquebilliere, southeastern France, after heavy rains and floodings hit the Alpes-Maritimes department

‘I cannot hide our grave concern on the definitive toll,’ Mr Castex said.

Many worried families had not heard from their relatives due to mobile phone services being cut off in the area.

‘As I speak, priority goes to searching for victims, providing supplies and accommodation for the people affected, and restoring communications,’ the prime minister said.

‘Together we will get through this,’ he said.

France’s national weather agency, Meteo France, said that up to 500 millimetres of rain (19.7in) were recorded in some areas, the equivalent of almost one year of average rainfall.

Meteo France had issued a danger alert on Friday and all schools in the region had been closed.