The United Nations has said it is ‘shocked and deeply disturbed’ by a video clip which appears to show two of its workers ‘having sex’ in an official UN vehicle in Tel Aviv.

In the 18-second video which was posted on Twitter, a man in the back seat of a white car marked with the UN letters is seen being straddled by a woman in a red dress who is moving up and down.

The man is just wearing a t-shirt and shorts and another male passenger in the front of the car appears to be asleep. The vehicle is then driven further down the road.

The UN said all of the car’s occupants are believed to be workers from the United Nations Truce Supervision Organization (UNTSO), a peacekeeping force based in Jerusalem.

Stephane Dujarric, spokesperson for UN Secretary General Antonio Guterres, said: ‘We are shocked and deeply disturbed by what is seen on the video.

‘The behaviour seen in it is abhorrent and goes against everything that we stand for and having been working to achieve in terms of fighting misconduct by UN staff.’

Mr Dujaarric added that the UN expects the investigation to be completed ‘very quickly’ and the couple are close to being identified.

The UN was first made aware of the video earlier this week and they said they know where it was filmed.

Viewers on Twitter expressed their dismay at the clip, with one writing: ‘Why am I not surprised.’ 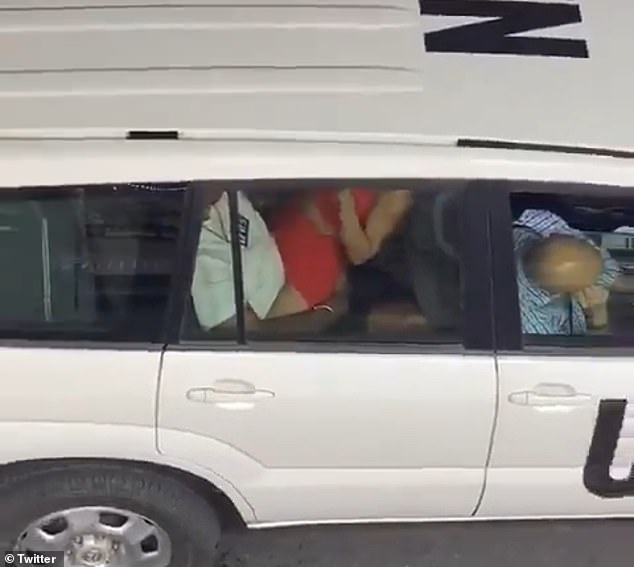 In the 18-second video which was posted on Twitter, a man in the back seat of a white car marked with the UN letters is seen being straddled by a woman in a red dress who is moving up and down. In the front of the car, a male passenger appears to be asleep

The person who posted the video, Canadian woman Mattea Merta, is a ‘pro-family representative’ at the UN, according to her Twitter profile.

She wrote above the post: ‘I present to you…..the UN’.

Another viewer wrote in response to the clip, ‘No big surprise is it?’

Ms Merta replied: ‘Nope, not at all. Compared to stories I’ve heard from people who have left their UN jobs…this was an innocent situation.’

Although the UN has strict regulations governing sexual misconduct by its workers, it has repeatedly come under fire for breaches in recent years.

In December, a report claimed peacekeepers at the UN had ‘hundreds of babies with women in Haiti before abandoning the young mothers. 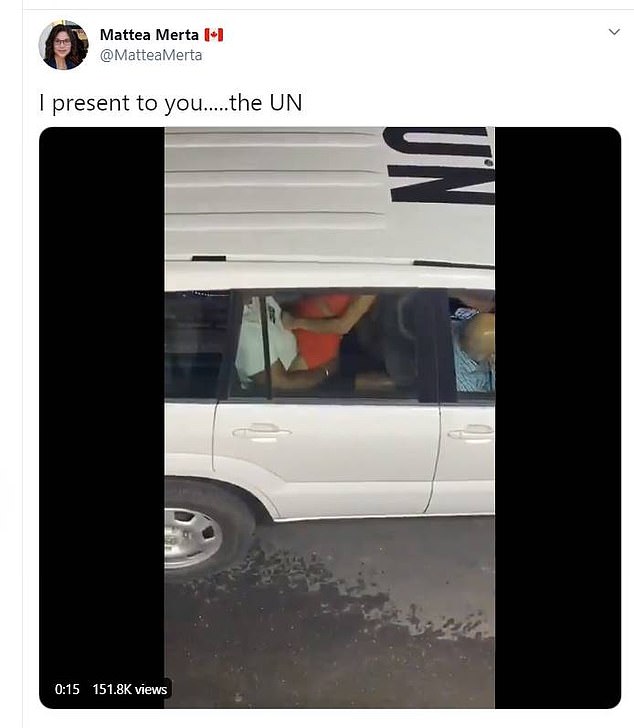 The person who posted the video, Canadian woman Mattea Merta, is a ‘pro-family representative’ at the UN, according to her Twitter profile. She wrote above the post: ‘I present to you…..the UN’

Viewers on Twitter expressed their dismay at the clip, with one writing: ‘Why am I not surprised’

Another viewer also said the video was not a ‘big surprise’. Ms Merta replied: ‘Nope, not at all. Compared to stories I’ve heard from people who have left their UN jobs…this was an innocent situation’

The study into the UN mission in the disaster-hit Caribbean country said girls as young as 11 were left pregnant after being sexually abused.

Some of the girls were traded for ‘a few coins’ in order to get food and would have sex with the peacekeepers so they could survive, the British academic-led study found.

After their children were born, the young mothers were left to a life of poverty, according to the Times.

Soldiers from as many as 12 different countries, including Uruguay, Chile, Argentina, Canada and France, were found to have impregnated local women, the report stated.

The UN also knew of charity workers offering refugees food in exchange for sexual favours for more than a decade, it has been revealed.

An 84-page report on ‘food-for-sex’ practices in West African refugee camps was compiled and handed over to the UN in 2002, but was never published.

It claimed that workers at more than 40 aid organisations, of which 15 are major international charities including Save the Children and Médecins Sans Frontières, sexually exploited young refugees.

It marked yet another aid worker sex scandal in the spotlight.

Last June a charities watchdog found Oxfam failed to investigate the sexual abuse of children as young as 12 and ‘lost sight of the values it stands for’, following an 18-month investigation.

It found there were ‘systematic weaknesses’ in its attitude to safeguarding, and there was no up-to-date safeguarding strategy in place as recently as 2018.

This included weaknesses in human resources practices, including on vetting, referencing, recruitment and induction.

There was also a failure to consistently hold people to account for poor behaviour and to ensure robust and consistent action was taken, resulting in a culture of tolerance of poor behaviour, the regulator’s investigation concluded.

This was likely to have resulted in putting victims off speaking up.

The report found the risk to and impact on victims ‘appeared to take second place at times’ and was not taken seriously enough, and that victims, whistleblowers and staff who tried to raise concerns were let down.

Oxfam was plunged into crisis in February 2018 when it emerged that some of its workers engaged in ‘sex parties’ with prostitutes after the humanitarian disaster in the Caribbean country of Haiti in 2010.

The commission launched its inquiry amid concerns Oxfam may not have fully and frankly disclosed material details about the allegations at the time in 2011, its handling of the incidents since, and the impact these have had on public trust and confidence.

The report said the incidents in Haiti identified in 2011 were not ‘one-offs’, with evidence of behavioural issues as early as June 2010.

It also found serious allegations of wrongdoing including sexual abuse of children were not fully disclosed.

The Charity Commission for England and Wales said there was a ‘culture of poor behaviour’ among Oxfam staff sent to help victims of the 2010 Haiti earthquake.

It also said Oxfam did not report allegations of child abuse by charity staff in Haiti, and that senior staff implicated in sexual misconduct claims were dealt with more leniently than junior figures.

Commission chief executive Helen Stephenson said at the time: ‘What went wrong in Haiti did not happen in isolation.

‘Our inquiry demonstrates that, over a period of years, Oxfam’s internal culture tolerated poor behaviour, and at times lost sight of the values it stands for.’

A year before the inquiry findings, the aid sector was accused of ‘complacency verging on complicity’ in 2018 when a damning report into the Oxfam scandal was published three years after the Charity Commission was first told.

The International Development committee said only superficial action was taken to tackle abuse carried out by Oxfam staff in disaster zones.

Committee chairman Stephen Twigg said at the time that abuse remains ‘endemic’ and the sector ‘deluded’ in its denial of ‘the horror of sexual exploitation and abuse’ (SEA).

He said: ‘Humanitarian organisations and the UN cannot continue a ‘culture of denial’ when confronted with allegations of SEA.

‘The committee is deeply concerned that previous attempts have amounted to limited action in order to quell media clamour with no lasting impact or redress.’

In the aftermath of the 2010 Haiti earthquake, Oxfam sent a team of 230 to help the homeless and starving.

Within months, allegations surfaced of senior staff using prostitutes – some of whom may have been under 18.

Roland van Hauwermeiren, head of the charity’s Haiti mission, was accused of paying teenage girls between £70 and £140 a time for sex at his hilltop villa known as the Eagle’s Nest. 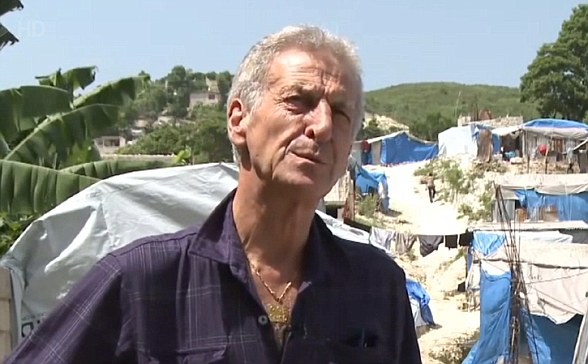 Former staff told the Mail earlier this year that Mr van Hauwermeiren, a 68-year-old Belgian, ‘loved young girls’. Instead of being dismissed, he was offered a deal to resign if he co-operated with the investigation.

The charity released a statement in August 2011 saying he had voluntarily stepped down because of staff misconduct.

Mr van Hauwermeiren became head of mission for Action Against Hunger in Bangladesh from 2012 to 2014. Despite employment checks, the charity said Oxfam ‘did not share any warning regarding unethical conduct’.