Africa could see anywhere between 300,000 and 3.3 million deaths due to coronavirus, according to the UN Economic Commission for Africa (UNECA).

It warned that if the continent does not implement measures to prevent the spread of the virus then total infections could spiral out of control and reach 1.2 billion.

But if intense social distancing measures are implemented, the number of total infections could drop to 122 million by the end of the pandemic.

The first confirmed COVID-19 case in Africa was reported in Egypt on February 14 and since then there have been more than 18,000 confirmed cases.

Algeria has the most COVID-19 related deaths in Africa with 348, with Egypt, Morocco and South Africa the next hardest hit countries.

The UN projections are based on a host of pre-exiting research, including statistics and modelling from Imperial College London.

A separate study from a team of international researchers has found that more than 16million Africans will likely be infected by the end of June.

Their own mathematical model predicts more than 20,000 people on the continent will lose their lives to COVID-19 during the next 10 weeks alone. 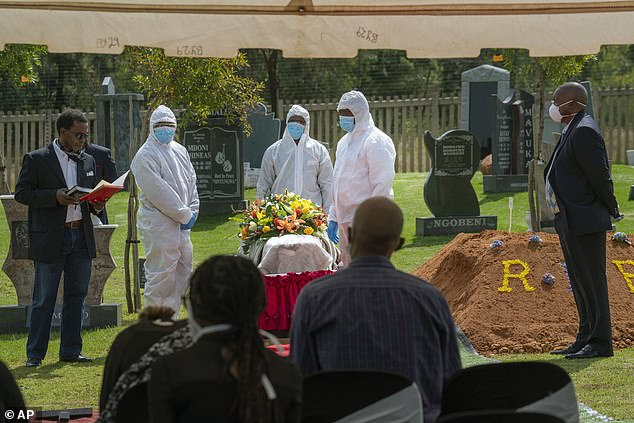 Family and friends listen to the eulogy for Benedict Somi Vilakasi, who died of coronavirus, at his burial ceremony at the Nasrec Memorial Park outside Johannesburg, April 16, 2020 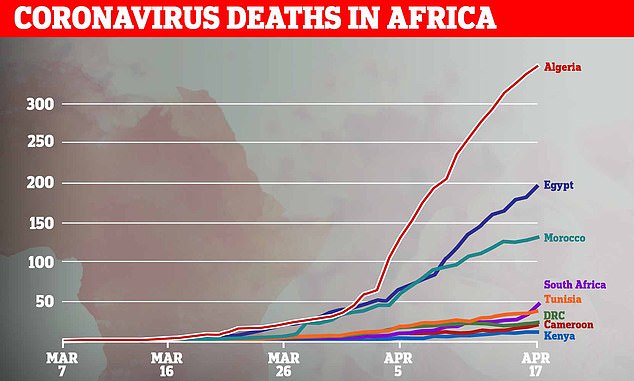 Today, World Health Organization officials also said Africa could become the next epicentre of the global pandemic unless the spread of the virus is contained.  Algeria has the most COVID-19 related deaths in Africa with 348, with Egypt, Morocco and South Africa the next hardest hit 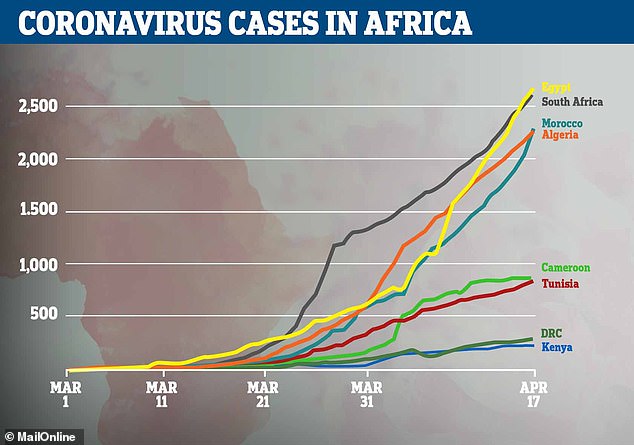 The first confirmed COVID-19 case in Africa was reported in Egypt on February 14 and since then there have been more than 18,000 confirmed cases. Most cases are concentrated in four countries: Egypt, South Africa, Morocco and Algeria

However, the scientists warn these figures are highly uncertain.

They say that the true figure for total infection numbers in Africa by the end of June 2020 could well be as low as 2.7million or as high as 98.4million, depending on how the continent responds to the outbreak.

Today, World Health Organization officials also stated Africa could become the next epicentre of the global pandemic unless the spread of the virus is contained. 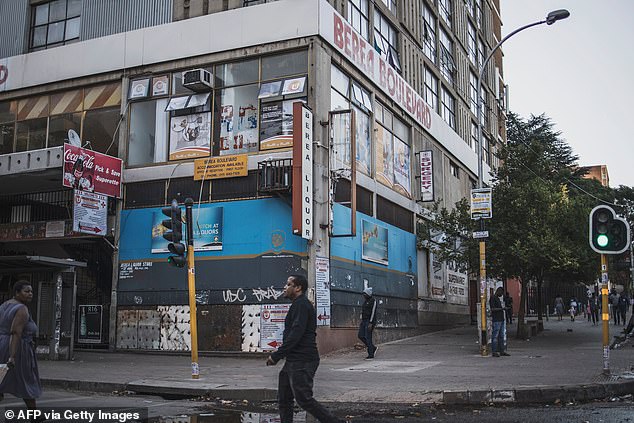 Pedestrians cross the road as they walk past a closed liquor store in Berea, Johannesburg, on April 17, 2020 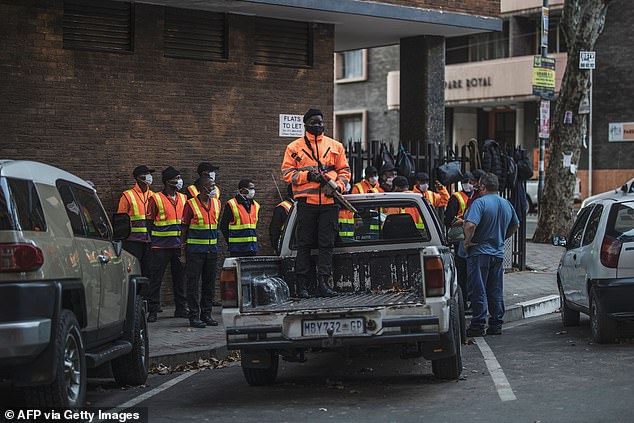 A private security guard stands with a semi-automatic rifle loaded with rubber bullets in Hillbrow, Johannesburg, on April 17, 2020

United Nations experts warn the rate of increase is similar to European countries that have been ravaged by COVID-19 and the World Health Organisation has today stated Africa could become the next epicentre of the pandemic.

Both pieces of research were published to address a dearth of literature examining how Africa will deal with the novel coronavirus.

‘Of all the continents Africa has the highest prevalence of certain underlying conditions, like tuberculosis and HIV/Aids,’ it reads.

AFRICA COULD BE THE NEXT CORONAVRUS EPICENTRE,  WHO WARNS

The World Health Organization has warned that Africa could become the next epicentre of a coronavirus outbreak.

Last week the continent experienced a sharp rise in reported cases and there has now been more 18,000 confirmed cases, and almost 1,000 fatalities.

The current rate is far below the European cities and countries but experts warn Africa could merely be a couple of weeks behind the curve, with a rapid ascension in cases predicted.

The WHO says the virus appears to be spreading away from African capitals.

Africa has suffered in the global competition for badly needed medical equipment but in recent days created a continental platform so its 54 countries can team up to bulk-buy items at more reasonable prices.

One major shipment of equipment, including more than 400 ventilators, arrived this week for sharing among all 54 countries.

Testing is also being increased dramatically in Africa.

More than a million tests are being rolled out starting next week to address a major gap in assessing the true number of cases.

It is possible that 15 million tests will be required in Africa over the next three months, the head of the African Centres for Disease Control and Prevention, John Nkengasong, told reporters on Thursday.

According the the University of Pretoria-led research, Northern Africa will be hit hardest of the continent’s five sub-regions over the next couple of months, with a predicted 8.5million cases by June.

However, under the worst case scenario this could skyrocket to more than 54million cases.

The researchers created an equation that predicts how COVID-19 will spread throughout Africa based on current infection levels and data from all around the world, with a specific focus on China and Italy.

Factors that can influence the spread of infection include: time since first reported case, rate of disease expansion, urbanicity, living standard, household size, population age structure, access to healthcare, quality of healthcare and the prevalence of HIV and asthma, according to the study led by Tom Achoki of the University of Pretoria in South Africa.

Djibouti, a country with a high population density, is predicted to be the African nation with most infections per capita. 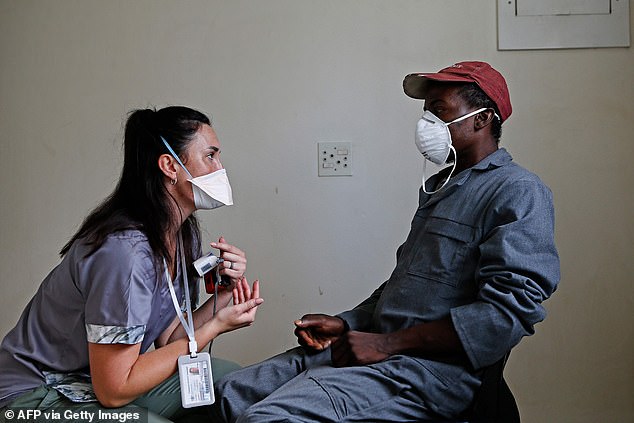 Almost all nations and territories in Africa have reported confirmed cases of coronavirus. Pictured: A homeless man in South Africa is treated after experiencing covid-19 symptoms

The study expects 32.8 people per 1,000 in the East African nation to be infected.

Researchers say the more urbanised and wealthier countries will experience a faster growth of the epidemic.

Countries such as Tunisia, Morocco, Algeria, South Africa and Kenya were singled out as fitting this criteria. 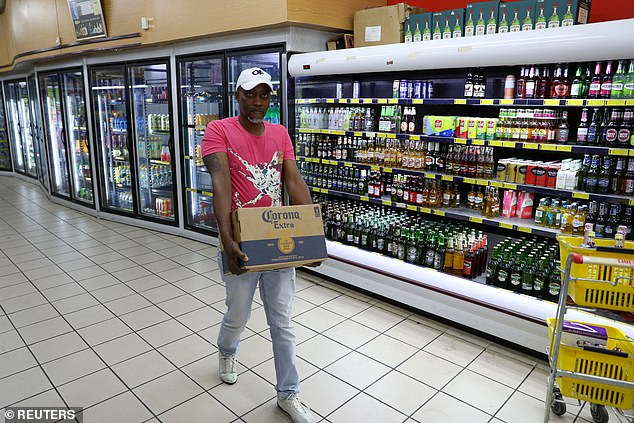 A shopper carries a box of alcohol during nationwide lockdown, in Johannesburg, South Africa

Closeness between residents and a geographic proximity to some of the European countries at the epicentre of the global outbreak put these nations most at-risk.

But the researchers add ‘some of these countries also have higher living standards and better health system than most countries in the region’ and are well-equipped to cope with an influx of cases.

However, less urbanised countries such as Angola, Botswana and Mozambique are poorly connected and infection spread is therefore likely to be limited.

However, if the virus does spread in these countries, they are likely to be harder hit.

The researchers explain ‘as the epidemic grows many of these countries are projected to experience increases in cumulative infections that are likely to overwhelm their health system.’

As healthcare systems struggle to cope, suitable critical care cannot be administered and the death rate of COVID-19 patients increases.

Most deaths will be recorded in the Northern Africa sub-region while Southern and Western Africa are expected to experience a comparable death toll, the scientists add.

Deaths in the Eastern Africa sub-region are expected to be the lowest of the sub-regions in Africa.

Algeria, Morocco, South Africa, the Democratic Republic of Congo, Tunisia and Cote d I’vorie are expected to be the countries with the largest loss of life.

According to the UN report, the issues in Africa extend beyond the horrific loss of life.

It warns of severe economic pain across Africa, with growth contracting 2.6 per cent in the worst-case scenario and 27 million people pushed into extreme poverty.

The World Bank has said sub-Saharan Africa could fall into its first recession in a quarter of a century.

Nearly 20 European and African leaders called this week for an immediate moratorium on all African debt payments, public and private, until the pandemic is over, as well as billions in immediate financial help so countries can focus on fighting the virus.

The UN report said the continent has no fiscal space to deal with shocks from the pandemic.

It recommended a ‘complete temporary debt standstill for two years for all African countries, low and middle-income included’.

The report comes days before African officials launch a new initiative to dramatically accelerate testing for the new virus.

More than a million tests are being rolled out starting next week to address a major gap in assessing the true number of cases.

It is possible that 15 million tests will be required in Africa over the next three months, the head of the African Centres for Disease Control and Prevention, John Nkengasong, told reporters on Thursday.

Africa has suffered in the global competition for badly needed medical equipment, but in recent days created a continental platform so its 54 countries can team up to bulk-buy items at more reasonable prices.

One major shipment of equipment, including more than 400 ventilators, arrived this week for sharing among all 54 countries.

OUTRAGE OVER CLAIMS VACCINE FOR CORONAVIRUS SHOULD BE TESTED IN AFRICA

Two French doctors were accused of racism earlier this month for suggesting Africa should be the testing ground for a coronavirus vaccine.

They claimed this should happen because the people in the continent, home to more than one billion people, are are highly exposed.

Jean-Paul Mira, head of intensive care at Cochin hospital in Paris, said: ‘If I can be provocative, shouldn’t we be doing this study in Africa, where there are no masks, no treatments, no resuscitation?

‘A bit like as it is done elsewhere for some studies on Aids. In prostitutes, we try things because we know that they are highly exposed and that they do not protect themselves.’

Camille Locht, head of research at the Inserm health research group agreed ‘you are right’ and added that a study in Africa was already being considered.

He said: ‘We are in the process of thinking about a study in parallel in Africa.’

The comments caused outrage on social media with many viewers calling the comments racist.

Former footballer Didier Drogba tweeted: ‘It is totally inconceivable we keep on cautioning this. Africa is not a testing lab.

The international and condemnation of the remarks was echoed by WHO director-general Tedros Adhanom Ghebreyesus.

He said in a virtual press conference: ‘Africa cannot and will not be a testing ground for any vaccine.

The WHO chief added that this line of thinking is an unwanted relic of the ‘colonial mentality’.

‘It was a disgrace, appalling, to hear during the 21st century, to hear from scientists, that kind of remark,’ the former Ethiopian health minister added.

‘We condemn this in the strongest terms possible, and we assure you that this will not happen.’