The UK’s largest gas storage plant has been reopened, helping to potentially increase supply during winter, but it will only work at 20 per cent of its capacity.

Centrica, which owns the Rough gas storage facility off the east coast of Yorkshire, made its first injection of gas into the site today after it was shut for storage purposes for five years.

The British Gas owner said the increase in gas supply would help ‘reduce or stabilise costs’ for households this winter, but added it would not be a ‘silver bullet’ for the country’s energy security.

Rough will be able to store up to 30billion cubic feet of gas for UK homes and businesses this winter, according to Centrica.

The company said the gas should be enough to heat 1million homes, or 3.5 per cent of the UK’s housing stock, for 100 days this winter, based on last year’s consumption.

However, on a winter cold day, when there’s more demand, the reserves could be enough only to meet 1 per cent of gas demand, it admitted.

Centrica had closed the plant in 2017 due to ‘economic’ reasons, with the Government refusing to help and Britain increasingly relying on imports of liquefied natural gas from countries including the US, Qatar, Peru and previously Russia.

Analysts warned at the time that closing Rough was a bad decision as it would increase the volatility of winter gas prices.

Before it was closed, Rough represented more than 70 per cent of UK storage and supplied 10 per cent of peak winter demand; now it will add 50 per cent to the UK’s storage volume.

Centrica has been in talks with the Government over the past year about reopening the facility as the UK faces warnings of blackouts amid the energy crisis exacerbated by the war in Ukraine.

Rough is not a silver bullet for energy security, but it is a key part of a range of steps which can be taken to help the UK this winter

Gas prices hit record highs this year following the Russian invasion of Ukraine, with the UK particularly exposed to price volatility and blackouts due to its low gas storage space.

Britain still has some of the lowest gas storage levels in Europe at nine days, compared to Germany at 89 days, France at 103 days and the Netherlands at 123 days.

It is also heavily reliant on gas to produce electricity, having derived about 40 per cent of its electricity by burning gas in 2021.

Gas prices have now fallen back by over 60 per cent since the end of August thanks to a mild start to the heating season and a surge in the amount of gas stored across Europe ahead of winter.

However, they are expected to soar back up in the coming months as demand is set to rise when it gets colder. 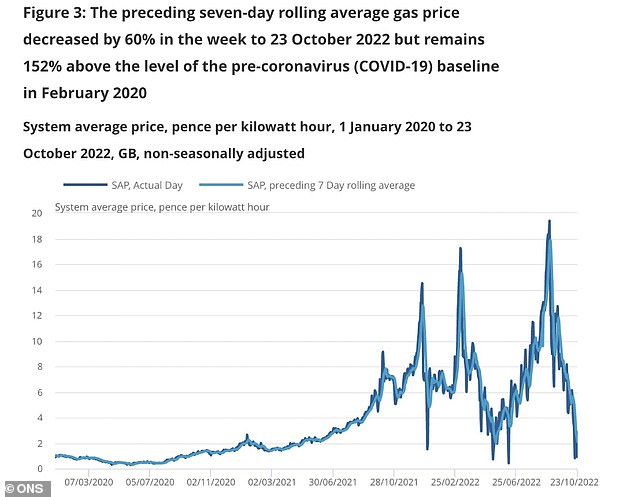 UK gas prices: The market price of gas has dropped by more than 60% since August

‘Rough will help to balance the UK’s gas market, injecting gas into the facility when prices are low and putting that gas back into the UK’s gas network when demand is higher,’ Centrica said.

‘The flexibility in Rough allows cheaper gas to be stored ready for winter, helping to reduce or stabilise costs for UK energy consumers,’ it added.

Centrica chief executive, Chris O’Shea, said the longer term plan was still to turn Rough into ‘the world’s biggest methane and hydrogen storage facility’, but for now it would be used as gas storage.

‘In the short term we think Rough can help our energy system by storing natural gas when there is a surplus and producing this gas when the country needs it during cold snaps and peak demand,’ O’Shea said.

‘Rough is not a silver bullet for energy security, but it is a key part of a range of steps which can be taken to help the UK this winter.’