Britain is now recording just 15,000 daily Covid cases, according to official statistics that illustrate how the latest wave is still retreating.

The figures cannot be compared to last Monday because no daily tallies were shared over the Easter Bank Holiday weekend.

Experts say the daily infection count is now ‘completely irrelevant’ because free tests have been scrapped for the vast majority of people. Death and hospital figures are also skewed because of how they are measured.

It comes after data from the Office for National Statistics (ONS) suggests the UK’s Covid outbreak is still shrinking, with infections falling in all age groups and across all regions of England.

Its surveillance study, which is based on swabs of 120,000 people and considered the best way of measuring the outbreak, estimates 3.2million people in England were infected in the week ending April 16. 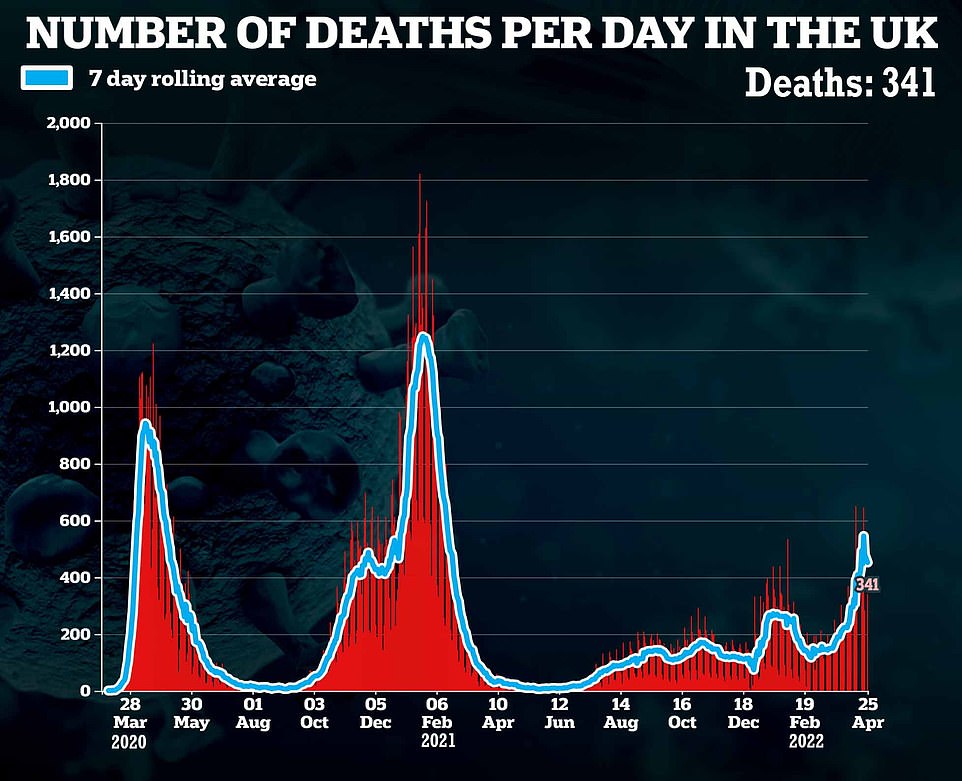 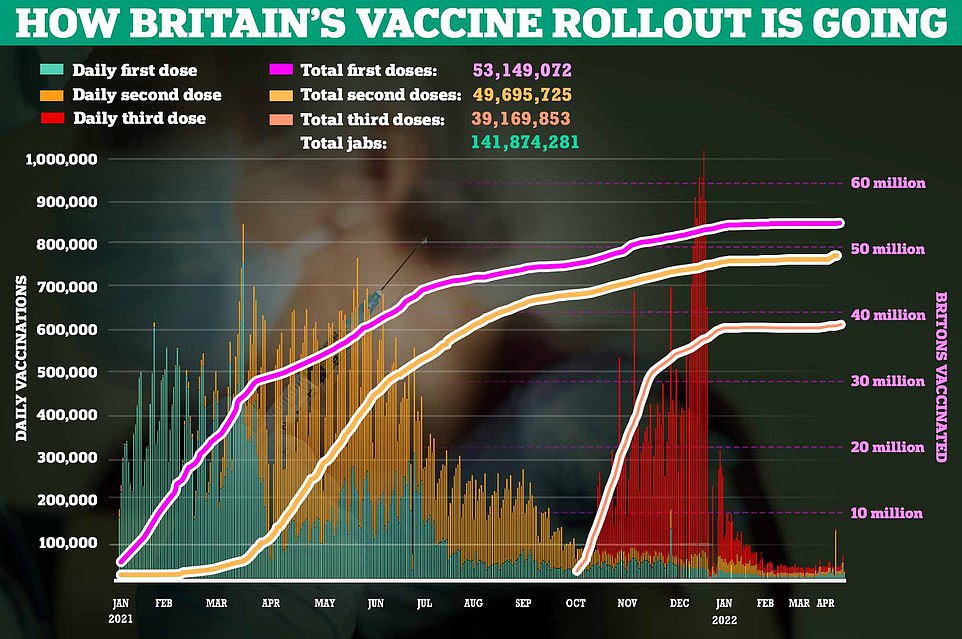 HOW MANY BRITONS HAVE HAD COVID?

The Office for National Statistics suggests 38.5million people in England got infected with Covid at some point between April 27, 2020, and February 11, 2022 — around seven in 10.

It is the first time an official figure has been put on the overall incidence of Covid, following fierce debate throughout the pandemic.

The estimate is based on results from more than 500,000 adults and children across the UK over the last two years, who were randomly chosen and regularly PCR tested.

The estimate for Scotland — 2.7million, or 51.5 per cent — is the least reliable because data only started to be collected on September 22, 2020.

Estimates for these countries are much less reliable than the England figure because the ONS only started collecting the data in summer in Wales and Northern Ireland, and even later in Scotland.

Participants were aged two years and over, lived in private households and were regularly tested during the duration of their time in the study.

The UK-wide total is down 50.6 per cent on two weeks ago. But the daily metric has become much less reliable now that free tests have been scrapped for the majority of Brits.

Cases by specimen data  — cases in relation to the date a person tested positive, rather than the date their infection was logged — shows infections peaked at 109,211 on March 21 and have been trending downwards since.

Using this data, an average of 20,717 Britons have tested positive per day in the week to Friday.

Meanwhile, 341 deaths within 28 days of a positive Covid test were reported today, down two per cent compared to a fortnight ago.

Vaccination data shows 92.4 per cent of Britons aged 12 and over have had at least one jab, while 86.4 per cent are double-jabbed and 68.1 per cent are boosted.

It comes as the latest ONS weekly infection survey suggested 3.2million people in England were infected with Covid in the week to April 16. The figure is 14.7 per cent lower than one week earlier and a fifth less than the latest peak at the start of the month.

The ONS’ report is the most reliable indicator of the current Covid situation now free tests have been axed for the vast majority of Britons.

It swabs a random sample of around 100,000 people and does not rely on people coming forward with symptoms, which can skew the results.

Separate ONS data suggests seven in 10 people in England have had Covid in the first two years of the pandemic.

The estimate is based on Covid test results from more than 500,000 adults and children across the UK over the last two years, who were randomly chosen and regularly given a PCR swab.

Working out the true prevalence of Covid has been challenging for academics because testing was patchy at the start of the pandemic and reinfections have become increasingly common.

UKHSA data, which purely relies on people coming forward for testing as opposed to random sampling, would indicate only three in 10 people across the UK have had Covid.