Britain’s Covid outbreak is continuing to shrink, according to official figures that show new daily infections reducing for the third day in a row today.

But the number of people dying within 28 days of a positive test is continuing to increase, with 156 people falling victim to the virus. The figure was up 30 per cent on the 120 recorded last week.

Fatalities tend to reflect changes in infection levels at least a week after due to the time it takes for people to become seriously ill.

Britain’s vaccine drive is continuing to roll forward with 89,832 second doses dished out today. It takes the total amount of adults fully protected against the virus to just under 43.9million (80.8 per cent).

Some 25,019 first doses were also dished out, taking the total number of people to receive at least one jab up to 48.4million (89 per cent).

The figures come amid reports the Oxford-AstraZeneca jab could be largely withdrawn from UK’s vaccine programme as millions of Britons who were given two doses are likely to be offered a Pfizer booster shot.

The booster programme is expected to rely mainly on the Pfizer vaccine under a ‘mix and match’ strategy to top-up immunity. 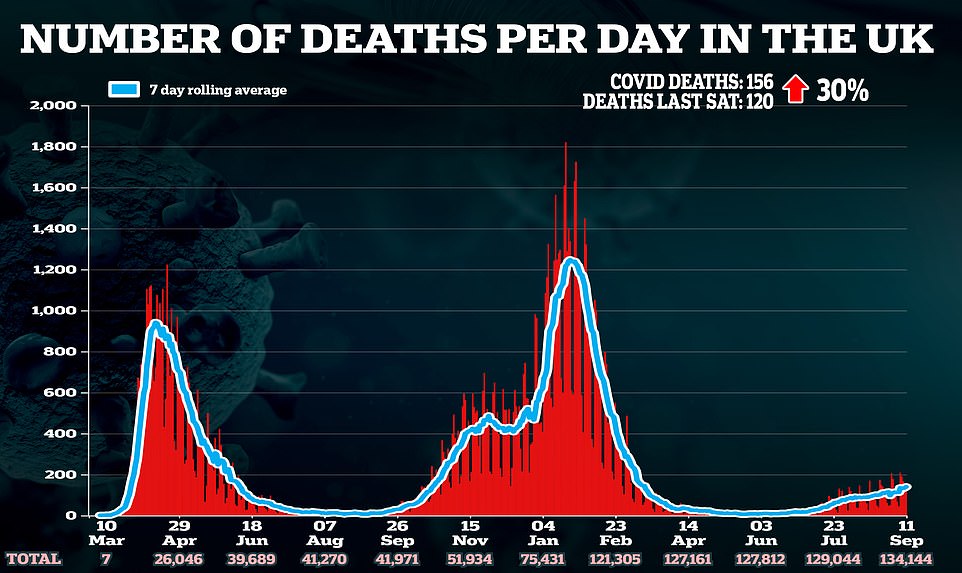 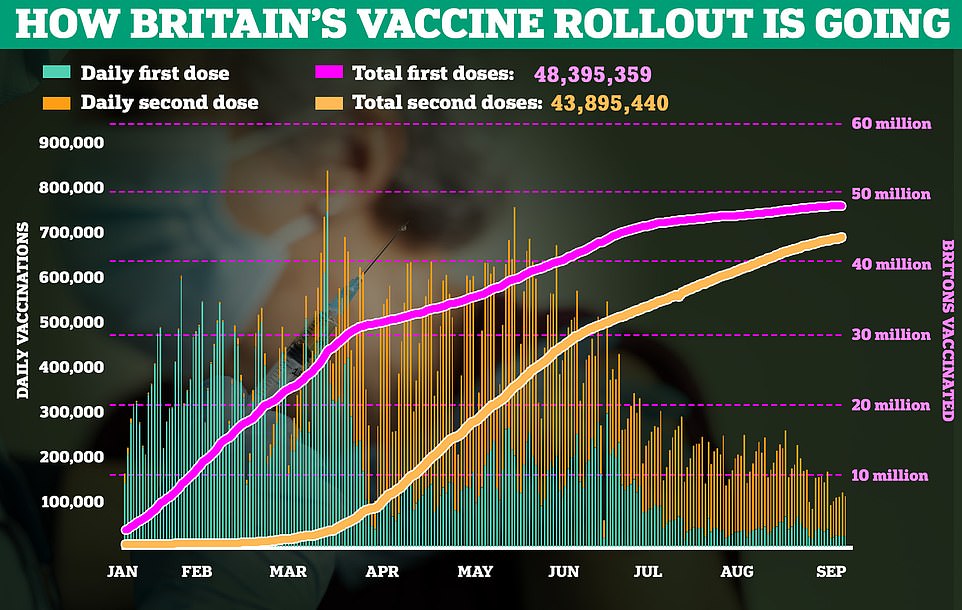 REVEALED: 26 out of the 27 Lancet scientists who trashed theory that Covid leaked from a Chinese lab have links to Wuhan researchers

Of the 27 scientists who wrote a letter in The Lancet medical journal dismissing the possibility that Covid originated from a Wuhan lab, 26 have links to its Chinese researchers, their colleagues or its benefactors, a new investigation has revealed.

On March 7 last year, the influential journal published the letter in which the 27 scientists said they ‘strongly condemned conspiracy theories’ surrounding the origins of the coronavirus pandemic that has impacted all corners of the world.

All debate into whether Covid had man-made origins or leaked from the lab in Wuhan — the Chinese city that was ground-zero for the virus — was effectively shut down by the letter.

However, an investigation by The Daily Telegraph newspaper into the signatories has found that 26 of the 27 had some link to the Wuhan Institute of Virology, where the leak was suspected – calling into question their impartiality.

Only one — Dr Ronald Corley, a microbiology expert from Boston University — has been found to have no links back to funders or researchers at the Wuhan institute.

Final details of plans to re-vaccinate up to 35 million adults are due to be unveiled early next week after being signed off by the Joint Committee of Vaccination and Immunisation (JCVI).

Ministers yesterday confirmed they were pressing ahead with the scheme despite criticism from Dame Sarah Gilbert, who created the Oxford jab.

Dame Sarah said a mass booster programme was unnecessary as immunity from two doses was ‘lasting well’, suggesting spare vaccines should instead be sent to developing countries.

But Culture Secretary Oliver Dowden said: ‘Pretty much all nations are looking at doing a booster programme – Israel are already doing it – so we are not an outlier in doing this.’

Speaking to Sky News, he added: ‘There is a range of opinion among scientists – this is why we have the JCVI to give us the authoritative advice and we’ll follow that advice.’ On Thursday the JCVI met to analyse results of a study by the University of Southampton looking at the impact of third doses on immunity.

The Cov-Boost trial found that a third dose of Pfizer-BioNTech is highly effective at boosting the body’s immune response to Covid-19.

This increase in antibody levels after a third dose applied both to people who had previously had two of either the Pfizer or the Oxford jabs for their first two doses.

It strengthens evidence in favour of a ‘mix and match’ approach to boosters.

The UK’s medical regulator has approved giving people Pfizer-BioNTech to people as a third dose even their first two doses were Oxford-AstraZeneca.

But they have not approved this the other way round – meaning people who have had two doses of Pfizer cannot get the AZ jab as a third dose.

The JCVI has already said a third dose of either Pfizer or Moderna vaccines should be offered to 500,000 people with severely weakened immune systems. 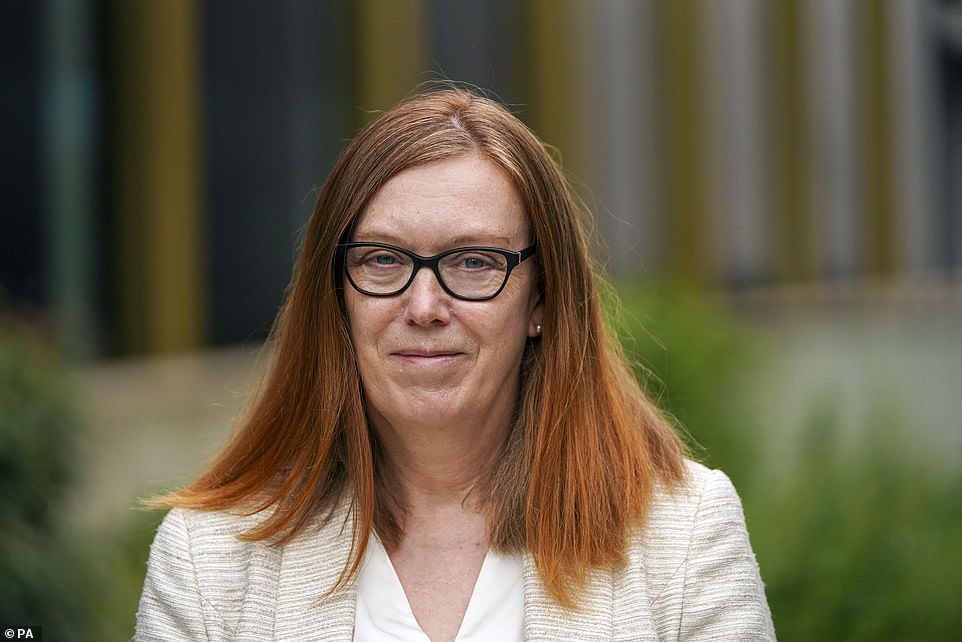 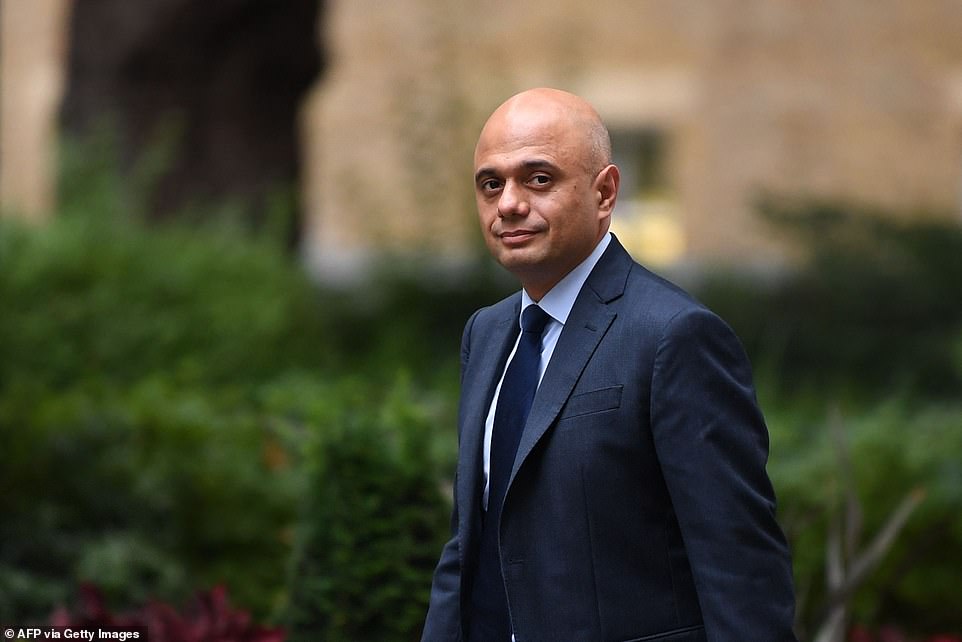 Health Secretary Sajid Javid has committed to a wider booster programme starting this month. It is likely to begin with those who were first to get vaccinated, including the over-80s and social care residents.

Professor Sir Andrew Pollard, director of the Oxford Vaccine Group, said the data on who is being hospitalised will be vital in determining who gets boosters.

He said: ‘What I think is really important, and as JCVI will be, is looking at the data on whether boosters might be needed – so in other words, looking at who is ending up in hospital, who are the people who are losing immunity at the moment.

‘And as far as I’m aware, up to this point, we’ve not seen any major breakdown in protection that we have in our population.’ He said immune responses ‘do start to fall’ over time ‘and of course that is happening at the moment’.

Asked whether there was a moral issue over giving booster shots when millions of people in other countries are unvaccinated, he said: ‘I think for the politicians, absolutely, if there is a need to vaccinate people to defend health, then that is their responsibility to the electorate, to us.

‘So that’s why it’s really important to follow the data and to look at where the potential is for improving protection if that’s actually needed, but there is a very separate issue which you raise here, which is the global situation.

‘At this moment, there is a fire raging all around the world, with huge pressure on health systems in many, many countries.’