Traditional Christmas dinners could be at risk as bird flu rips through poultry farms in England and Wales, farmers have warned.

Britain is currently grappling its biggest ever outbreak of avian influenza, with over 3million chickens, turkeys and ducks culled over the past year to halt the spread of the highly infectious disease.

Devon, Cornwall, Suffolk and Norfolk, as well as parts of Somerset and Essex, have already been declared avian influenza prevention zones, meaning strict biosecurity rules have been imposed on all bird keepers.

This includes housing and isolating birds away from wild populations and restricting access to farms by visitors.

Stricter curbs could be on the way, amid fears of another uptick in cases when flocks of migratory birds arrive in the UK in the coming weeks.

One farmer confessed they were ‘terrified’ of the weeks ahead.

Under Government orders, almost 65,000 turkeys will be culled at one affected Norfolk farm. 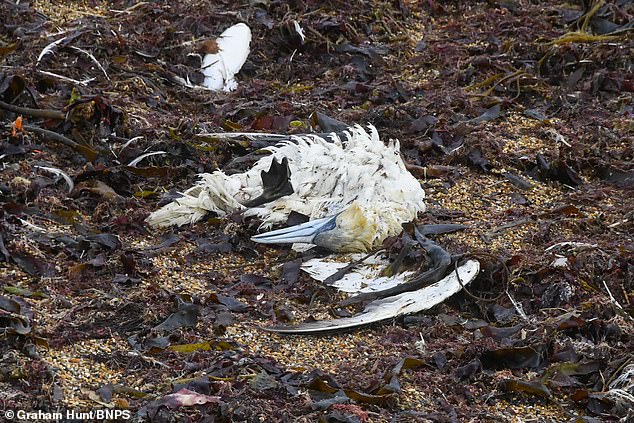 Britain is grappling with is biggest ever outbreak of avian influenza which has seen millions of domestic poultry being culled and thousands of wild birds, like this gannet, also killed by the disease

BIRD FLU: EVERYTHING YOU NEED TO KNOW

What is it? Bird flu is the source of all human flus, as far as we know.

It often passes through another animal, such as a pig, in the process of mutating and adapting to infect us.

As they cluster together to breed, the virus spreads rapidly and is then carried to other parts of the globe.

New strains tend to appear first in Asia, from where more than 60 species of shore birds, waders and waterfowl, including plovers, godwits and ducks, head off to Alaska to breed and mix with various migratory birds from the Americas. Others go west and infect European species.

What strain is currently spreading? H5N1.

So far the new virus has been detected in some 80million birds and poultry globally since September 2021 — double the previous record the year before.

Not only is the virus spreading at speed, it is also killing at an unprecedented level, leaving some experts to say this is the deadliest variant so far.

Millions of chickens in the UK have been culled and last November our poultry industry was put into lockdown, heavily affecting the availability of free-range eggs.

Can it infect people? Yes, but just 864 people have been infected with H5N1 globally since 2003 from 20 countries.

The risk to people has been deemed ‘low’.

But people are strongly urged not to touch sick or dead birds because the virus is lethal, killing 53 per cent of people it does manage to infect.

Should I be concerned? Not particularly.

Poultry farmers and people who handle wild birds are most at risk.

Scientists say there is a tiny chance a double infection of avian and seasonal flu could allow the current bird flu strain to adapt to be able to spread between people, but it remains highly unlikely.

Britain’s turkeys were sent into a full-blown lockdown last winter to control the spread.

It involved keeping them cooped up indoors for several weeks.

The Department of Environment, Food and Rural Affairs (DEFRA), which manages outbreaks of animal diseases in the UK, could reimpose a similar policy if cases spiral out of control.

Current rules in Britain’s bird flu hotspots say bird owners should keep their flocks isolated from wild birds, with their food and water contained in covered areas where wild species cannot access it.

Ducks and geese, which are particularly susceptible to avian influenza, must also be kept separate from other birds.

Visitors to farms and other locations where birds are kept, with the exception of zoos, must also be kept to a minimum.

Some experts have even predicted a human outbreak of the virus could be ‘on the horizon’.

Alaistaire Brice, of the Havensfield Happy Hens farm in Hoxne, Suffolk told the BBC that poultry producers faced an almost impossible task in preventing the disease reaching their flocks.

‘You can’t stop birds flying overhead and landing on our chicken range,’ he said.

He claimed thousands of turkeys have been culled in the region in the past few days, despite already being in enclosed buildings.

‘So even with the very best biosecurity in the world you can’t necessarily prevent it.’

The 65,000 turkeys in Norfolk are among 3.1million birds humanely killed by DEFRA authorities since October last year to control the spread of the disease.

While DEFRA declines to break down the total cull by species, it said the majority were chickens bred for meat as well as egg-laying hens.

Turkeys destined for Christmas dinners hatched in June and are now in the process of bulking up ahead of being slaughtered for the festive season.

National Farmers’ Union poultry board chair James Mottershead said the sector had been hit hard by the virus.

‘Turkey producers are working hard to maintain production in the face of avian influenza , as well as soaring energy and input costs, to ensure there remains an ample supply of British turkeys this Christmas,’ he said.

‘We will continue to work with the government to minimise the impacts of any future outbreaks of avian influenza so that we do not experience another year like this one.’

A spokesperson for the UK’s Traditional Farmfresh Turkey Association said farmers were concerned about bird flu but were following biosecurity measures to ensure supplies of animals were secure for winter.

‘Farms are following DEFRA guidelines to protect their turkeys from the risk of avian influenza, prevent its spread and ensure everyone who wants a quality turkey for Christmas can order one,’ they said.

Previous outbreaks of bird flu in Britain have been linked to the annual migration of birds from the continent in the winter months.

But this year’s outbreak has seen the virus persist in native bird populations during the summer months, with Government experts calling the situation ‘unprecedented’.

Mark Gorton, of Traditional Norfolk Poultry in Shropham, Norfolk said farmers were ‘terrified’ ahead of the annual migration that traditionally brings the virus to the UK.

‘We’re absolutely terrified what’s going to happen when the big numbers of the ducks and geese do start to migrate in,’ he said.

‘We’re concerned it could make things a lot worse than it already is.’

He is calling for domestic poultry to be vaccinated against the virus.

This is something that DEFRA has ruled out over fears it would reduce signs of illness in birds, allowing the virus to spread before they could be culled.

A DEFRA spokesperson said the birds killed are a fraction of the 1billion consumed by the British public annually.

They insisted there are ‘no concerns’ about Christmas meat supplies. 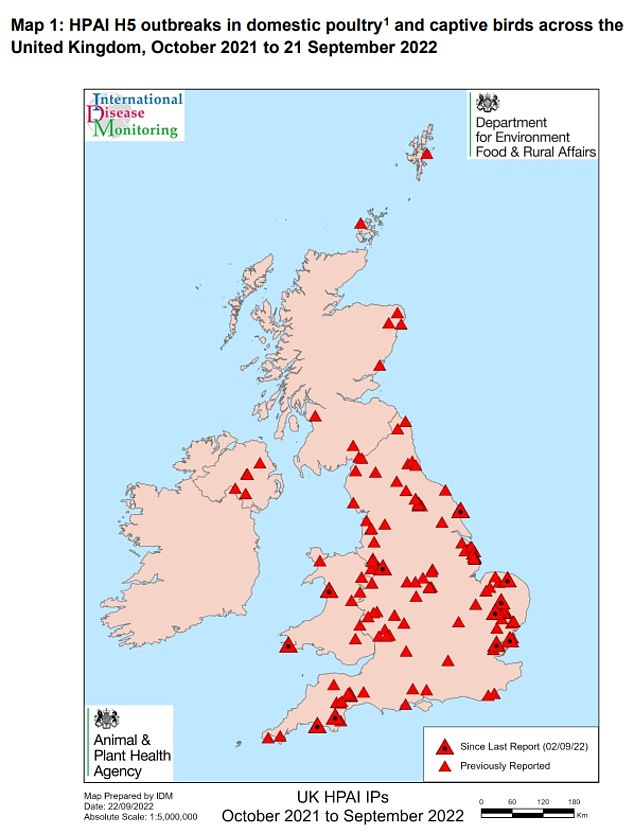 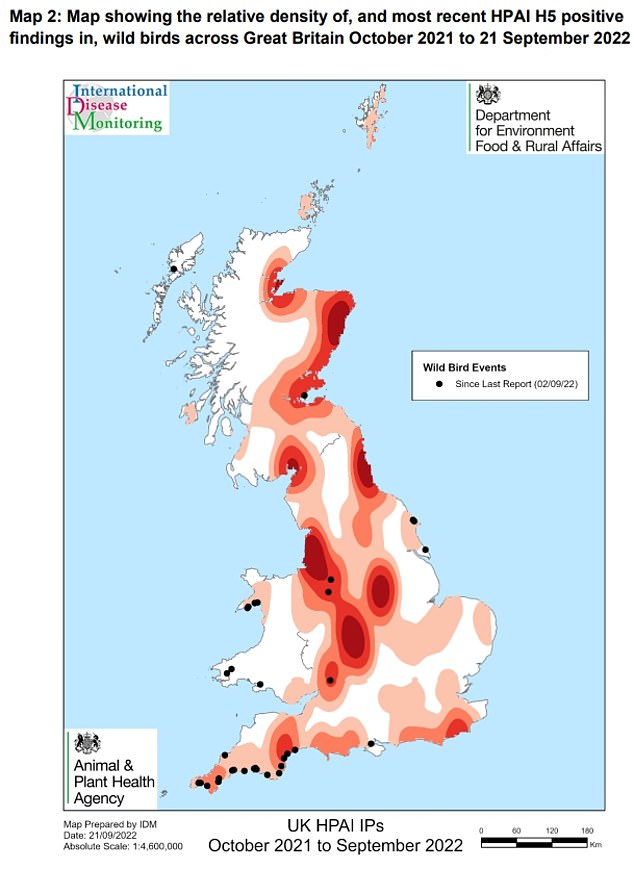 Wild bird populations have also been hit by the virus, with 1,672 cases recorded by DEFRA as of September 21, the majority in swans, geese and gannets.

The British public have been advised to avoid the carcasses of wild birds over fears of catching the virus.

While bird flu can be deadly in people, the risk of catching it from birds or poultry products like eggs or meat is considered low.

Poultry farmers and those who handle dead birds, like slaughterhouse workers, are deemed to be most at risk.

Devon man Alan Gosling, 79, was forced to quarantine for three weeks after catching bird flu in the closing weeks of 2021.

He eventually made a full recovery but was heartbroken after a flock of ducks he kept inside his house had to be culled after contracting the virus.