Australia’s second richest woman and her husband are facing fierce criticism from protestors demanding they pull their multi-billion-dollar graphics company out of Russia.

Melanie Perkins’ DIY graphic design platform Canva is now worth more than $55 billion, of which she and co-founder/husband Cliff Obrecht own 30 per cent, a stake which is over $16.4 billion.

But the tech darlings – who have pledged to give most of their fortune for charity – found their company in an unusual position this week, when Ukrainian protestors lined the street outside of their Sydney office.

The protesters assembled on Kippax Street, Surry Hills, on Tuesday demanding that the tech company withdraw its business from Russia.

Protestors lined the street outside of Canva’s Sydney office, on Kppax Street in Surry Hills, on Tuesday demanding that the tech company completely withdraw its business from Russia

Canva had previously announced it had cut off payments in and out of Russia, including subscriptions, on March 1 but its decision not to pull its software entirely from the country has triggered a furious response.

‘Canva is still trading in Russia and hence funding the war in Ukraine,’ the protestors said.

‘It’s time that Canva goes on the right side of this war and stops trading in Russia.’

Canva co-founder Mr Obrecht has condemned the Russia’s invasion of Ukraine as ‘illegal acts of aggression’ but said its free service remained accessible in the country so that users were able to design protest images against the war.

‘Like billions of people around the world, we are strongly opposed to the ongoing war in Ukraine and strongly condemn Russia’s continued and illegal acts of aggression,’ Mr Obrecht wrote.

‘Our pro-peace templates have been used more than 275,000 times since the start of the war.

‘Our hope is that we can provide the Russian community with a platform to champion important causes, communicate their opposition to the war, and to join in the resounding global calls for peace.’ 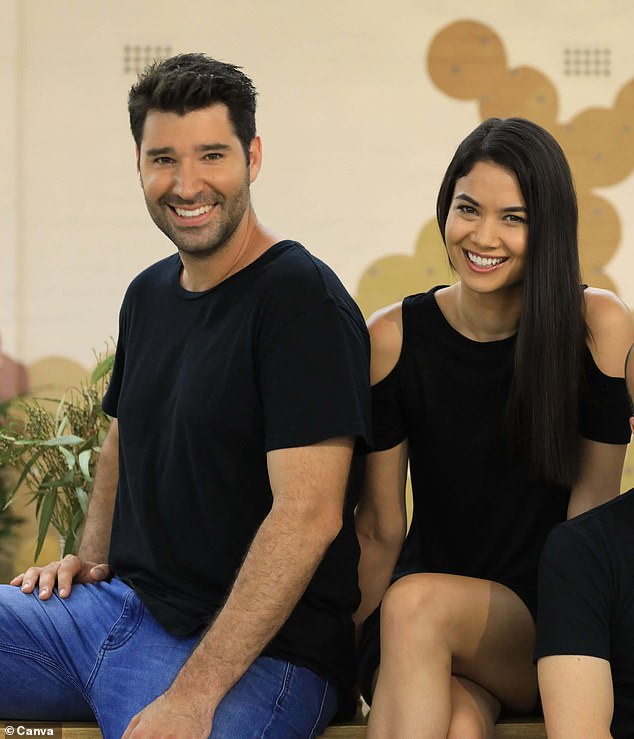 However, Ukrainian expat and software engineer Uvi Levitski, who is part of a group monitoring the actions of companies following Russia’s invasion, said they were ‘appalled’ by Canva’s ‘inconsistent’ and ‘unprincipled position’.

‘It wouldn’t be unreasonable to assume that, in the absence of any moderation of private content, the amount of pro-war material made using Canva by users in Russia will similarly outweigh anti-war material,’ Mr Levitskii told the Guardian.

‘And that’s even ignoring the fact that public opposition to the war has been effectively criminalised and is punishable with up to 15 years of imprisonment.’

Canva, which services 60 million customers in 190 countries, faced severe criticism as it became the only Australian company to earn the worst ranking on a list of global company’s responses to Ukraine’s invasion.

Yale University ran a tracker that found close to 1,000 companies that were voluntarily curtailing operations beyond the minimum required by legal sanctions against Russia.

The tracker had marked Canva with an ‘F’ rating but after it clarified its position and condemned the war the Australian company was moved up to a ‘C’ ranking.

After humble beginnings, the ultra-ambitious Perkins, just 34, has come to be regarded in tech circles as a friendly but ‘intense’ visionary.

In a video call to the company’s 2,500 staff in December Perkins said: ‘We want every single person on the planet to use Canva.’

She also told staff the company was set to become one of the most valuable companies in the world, having already surpassed Telstra and nearing Andrew Forrest’s Fortescue Metals Group in value.

Perkins and Obrecht don’t plan to keep that wealth as they have pledged their fortune to charity. 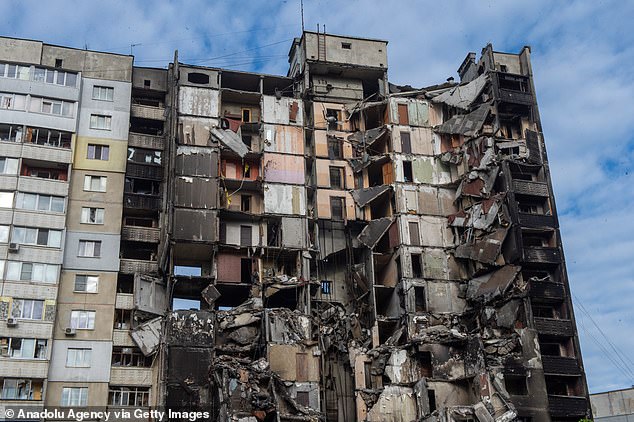 Pictured, is a residential building in Northern Saltivka in Kharkiv, Ukraine after repeated shelling by the Russian military on May 25

In December, they signed up to Bill Gates’ the Giving Pledge, committing to giving away their fortune during their lifetimes in a mission to eliminate extreme poverty.

‘We have this wildly optimistic belief that there is enough money, goodwill, and good intentions in the world to solve most of the world’s problems,’ their pledge letter read.

‘We feel like it’s not just a massive opportunity, but an important responsibility, and we want to spend our lifetime working towards that.’

‘Who needs all that money? Personally?’ Ms Perkins said.