Ukrainian forces are advancing in the south and may have scored a major breakthrough of Russian lines as they also take more territory in the east.

Kyiv’s troops are attacking down the west bank of the Dnipro River and have taken the town of  Zolota Balka, it was reported Monday, amid claims from pro-Kremlin sources that troops had retreated as far as Dudchany, around 15 miles further south.

It comes after the key city of Lyman, in Donetsk, was captured by Ukrainian forces at the weekend, with Kyiv’s commanders saying troops are now attacking the town of Kreminna, in neighbouring Luhansk.

It means that Putin’s troops are now losing ground in three out of the four Ukrainian regions he annexed last week – declaring that any attack on them would be considered an attack on Russia and may trigger a nuclear response.

Ukrainian troops are filmed ambushing Russian armoured vehicles using anti-tank launchers in Donetsk, leaving at least one of them destroyed 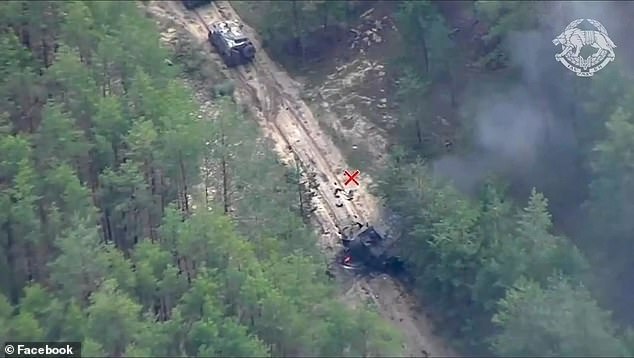 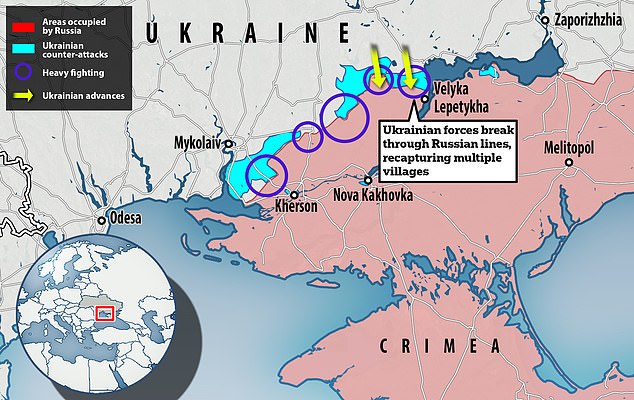 Ukraine is also advancing in Kherson, in the south, were troops are reported to have broken through Russian lines on the Dnipro River (top)

Anton Gerashchenko, a senior adviser to the Ukrainian government, posted footage online Sunday purporting to be from the town of Zolota Balka in southern Kherson region, showing a flag-waving soldier posing with civilians.

The Institute for the Study of War, a respected US think tank, also reported overnight that Ukraine had captured the town while President Zelensky also hailed Ukrainian advances in the region.

However, pro-Russia military bloggers were far more pessimistic – claiming Ukraine had scored a major breakthrough of the frontlines.

According to multiple accounts, Putin’s troops have been forced to pull back to the town of Dudchany – meaning the Ukrainians had advanced around 20 miles.

If confirmed, it would be one of the largest breakthroughs in Kherson since Ukraine began its offensive in early August, and would be a heavy blow for Putin’s men.

Meanwhile, hundreds of miles away to the north east, Ukraine said it had captured the town of Torske – located around seven miles east of the city of Lyman, which it had liberated on Saturday.

Taking the city would open the door to an assault on the twin cities of Severodonetsk and Lysychansk, which Russia spent weeks and huge amounts of manpower capturing over the summer.

Meanwhile more attacks were reported further to the north, heading east out of the city of Borova towards Svatove, which is also located in Luhansk.

Kherson, Luhansk and Donetsk – together with Zaporizhzhia – were annexed by Putin in a major speech inside the Kremlin last week. 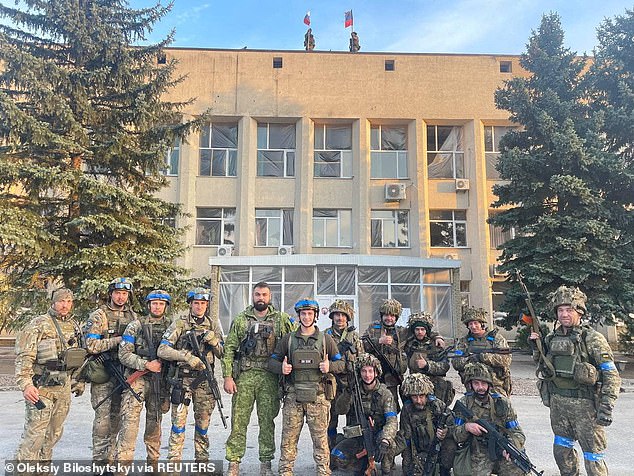 Ukraine liberated the city of Lyman, in Donetsk, at the weekend and has since advanced into the nearby town of Torske 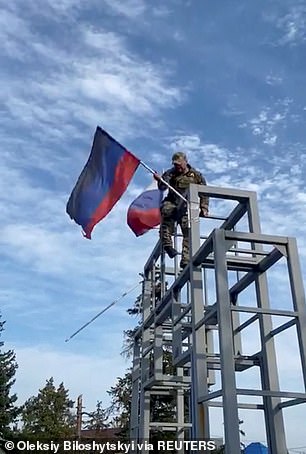 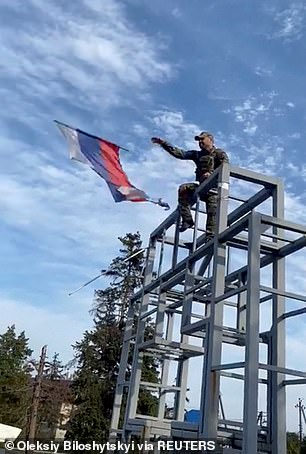 Kyiv’s men have been rapidly advancing into the Donbas region from Kharkiv since pulling off a major counter-attack there last month (pictured, a Russian flag is removed in Donetsk) 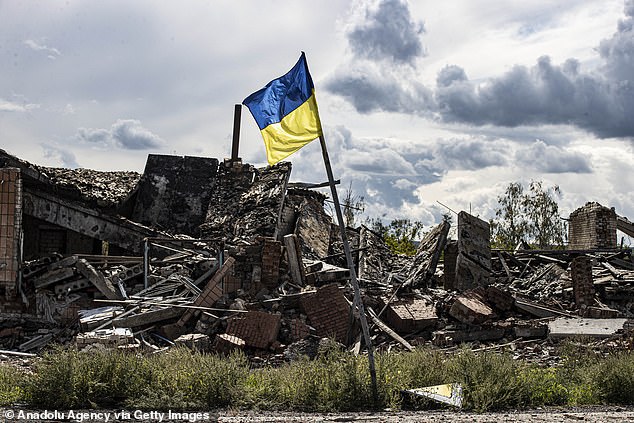 The despot declared that the regions would be part of Russia ‘forever’, while his spokesman said any attack on them would be considered an attack on the mainland.

Kyiv has rejected the annexation, saying it is based on sham referenda that hold no international weight and has vowed to continue liberating the occupied territories.

Ukraine’s western backers have also vowed never to respect the land-grab – the largest in Europe since the Second World War – and say there will be no let-up in weapons supplies, despite Putin’s threats to go nuclear.

It comes amid reports that the despot is increasingly making decisions in private with members of the Russian elite complaining that he is acting rashly.

Fifteen civil servants, politicians and company executives told The Telegraph that Putin is refusing to talk things through with his senior officials.

‘There is a total lack of coordination. It’s a mess. Putin tells everyone different things,’ a source close to the government said.

Speaking about the Ukrainian rout of Russian troops that prompted Putin to make his nuclear threats and conscript civilians into the military, the source added: ‘What were we doing in Kharkiv? No one has a clue.’

Another government source laid out a grim picture for the war ahead.

‘The 300,000 [conscripts] are just a distraction. Now it’s partial, but then there will be mass ‘conscription’, and after that, tactical nuclear weapons,’ they said.

Putin is now more than seven months into what he designed to be a days-long ‘special military operation’ in Ukraine to take back control of the country.

Having failed first of all to take Kyiv in a lightning offensive at the start of the war, his offensive in the eastern Donbas has also ground to a halt.

Ukraine then launched two counter-attacks in Kherson and Kharkiv in August, the first of which is making slow but steady progress and the second of which achieved a major breakthrough that has placed Russia on the back foot.

Putin now appears to have largely given up on his plans to advance and is instead digging in his heels and trying to hold on to territory he has already taken in the hopes of playing off the war to the Russian people as a success. 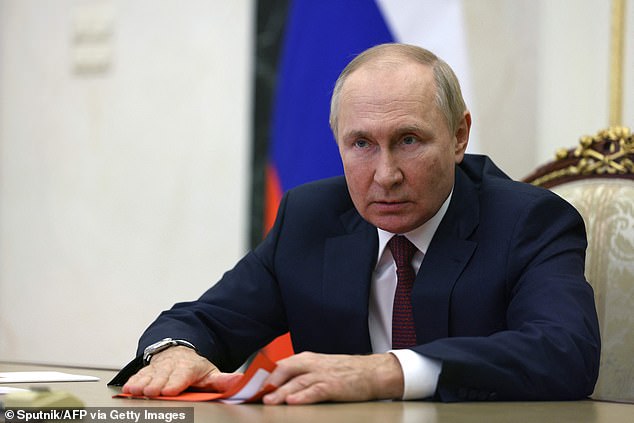 Vladimir Putin has annexed four regions of Ukraine to Russia, but is now losing ground in three of them amid fears he could escalate to using a nuke 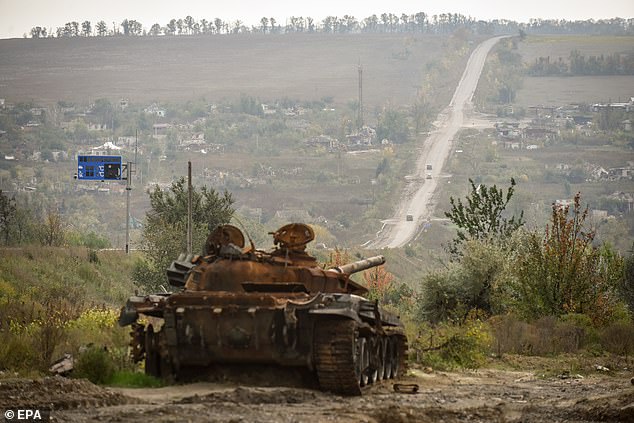 A burned-out Russian tank is seen on top of a hill in the Kharkiv region, which was retaken from Russia in a counter-attack last month

He has called up 300,000 military reserves to shore up his wavering frontlines and declared occupied parts of Ukraine to be part of Russia.

He has also falsely accused NATO of plotting nuclear strikes on Russia and has warned of retaliation with similar weapons.

At the same time, mysterious blasts destroyed the Nord Stream 1 and 2 gas pipes under the Baltic Sea last week in what European leaders called sabotage.

Though nobody other than Ukraine has blamed Moscow aloud, in private security officials have said there is little doubt the Kremlin was behind it.

The aim, experts said, was to send a warning to the West that its critical undersea infrastructure – including pipes and cables – is vulnerable to attack.

Putin appears to be gambling that acts of sabotage coupled with overt threats can break Western unity around Ukraine, and dry up the flow of cash and weapons currently heading to Kyiv.

That would likely force the war to a stalemate from which Putin would hope to secure a ceasefire deal, allowing him to rebuild his armed forces and attack again – as he did after annexing Crimea from Ukraine in 2014.