EXPRESS INFORMER > Travel > UK will become home to the first-ever Jumanji-themed park, opening at Chessington in 2023

Drum’s the word! UK is set to become home to the first-ever Jumanji-themed park, with a £17m land based on the hit movies opening at Chessington World of Adventures Resort in 2023

The world’s first Jumanji-themed park will open in the UK in 2023, it has been revealed.

The £17million ($19.5million) ‘World of Jumanji’, based on the hit Jumanji film franchise, will open at Chessington World of Adventures Resort, in partnership with Sony Pictures Entertainment, next spring.

It’s being billed as the single largest investment in the history of Chessington World of Adventures.

The world’s first Jumanji-themed park will open in the UK in 2023, it has been revealed. The £17million ‘World of Jumanji’, based on the hit Jumanji film franchise, will open at Chessington World of Adventures Resort next spring (rendering above)

The resort says: ‘The project brings together entertainment and industry experts from around the world as they create a world-first experience that deep dives into the adventurous, action-packed stories seen in the box-office-hit Jumanji films.’

Renderings for the land offer a first look at what visitors can expect.

The resort continues: ‘The impressive entrance portal, which is shrouded in the ominous and overgrown Jumanji jungle that dominates the development, creates the perfect immersive starting point for guests as they prepare to take on a whole host of challenges.

‘The iconic and unmissable Jaguar Shrine structure looms 55ft tall, keeping a watchful eye out over all who enter as it awaits the return of the curse-lifting Jaguar’s Eye jewel.’

Tim Harrison-Jones, Divisional Director at Chessington World of Adventures Resort, said: ‘What could be more exciting than bringing the global hit Jumanji film franchise to life within the single largest development Chessington has ever seen.

‘We know what it takes to create the ultimate adventure for our guests, spread over 128 acres, the resort already delivers surprises around every corner with over 40 wild rides and attractions, a zoo with over 1,000 majestic animals and two themed hotels – plus glamping!’ 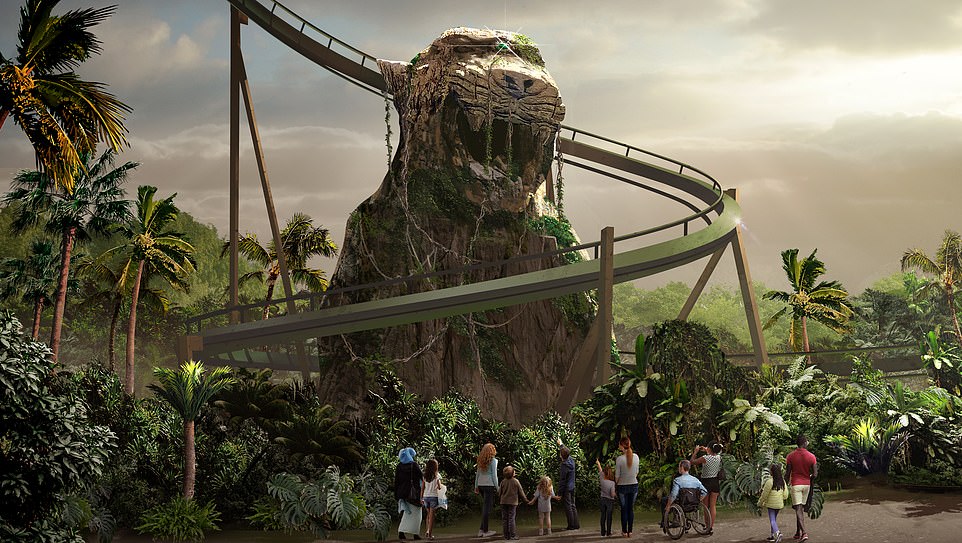 Jeffrey Godsick, EVP of Global Partnerships and Brand Management and Head of Location Based Entertainment at Sony Pictures Entertainment, said: ‘After being entertained by the films for so many years, fans now have the chance to experience Jumanji in a whole new dimension.

‘We are thrilled to be going on this exciting adventure with the creative team at Chessington as Jumanji further expands with its very own themed land.’

The long and lucrative history of the film franchise dates back to 1981, with the release of the fantasy children’s picture book Jumanji, written and illustrated by Chris Van Allsburg.

It tells the story of a magical board game that is played out in real life, with exotic animals, stampedes and monsoons jeopardising the lives of the players.

It was adapted into a film starring Robin Williams and a young Kirsten Dunst in 1995 – with the board game making its presence known via an ominous beating drum sound. The movie was a hit with cinemagoers, raking in £197million ($262.8 million) at the box office. 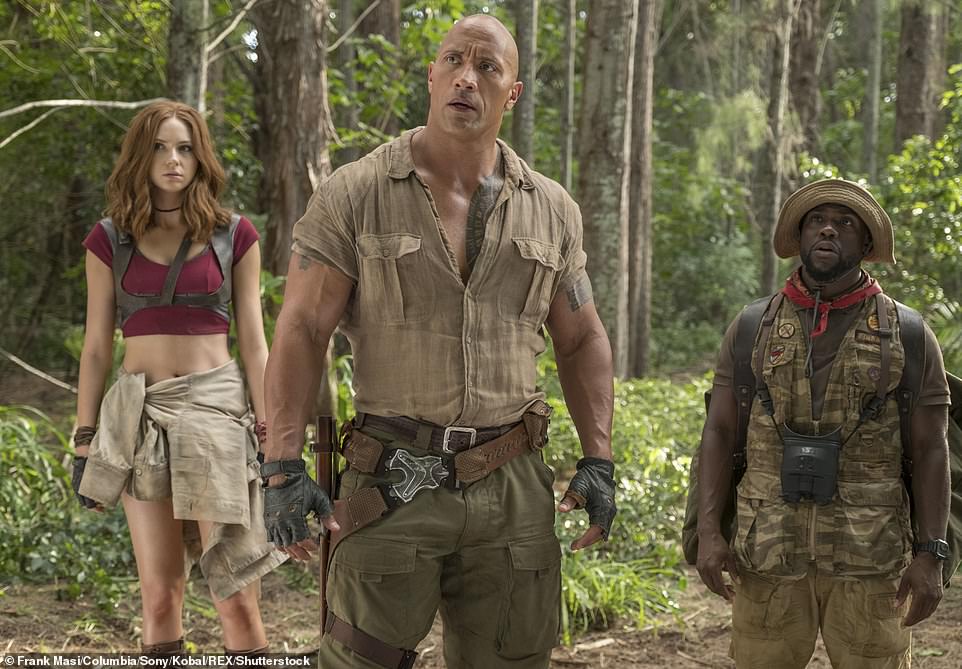 Jumanji: Welcome to the Jungle (pictured) sees the ‘Jumanji’ board game morph into a video game 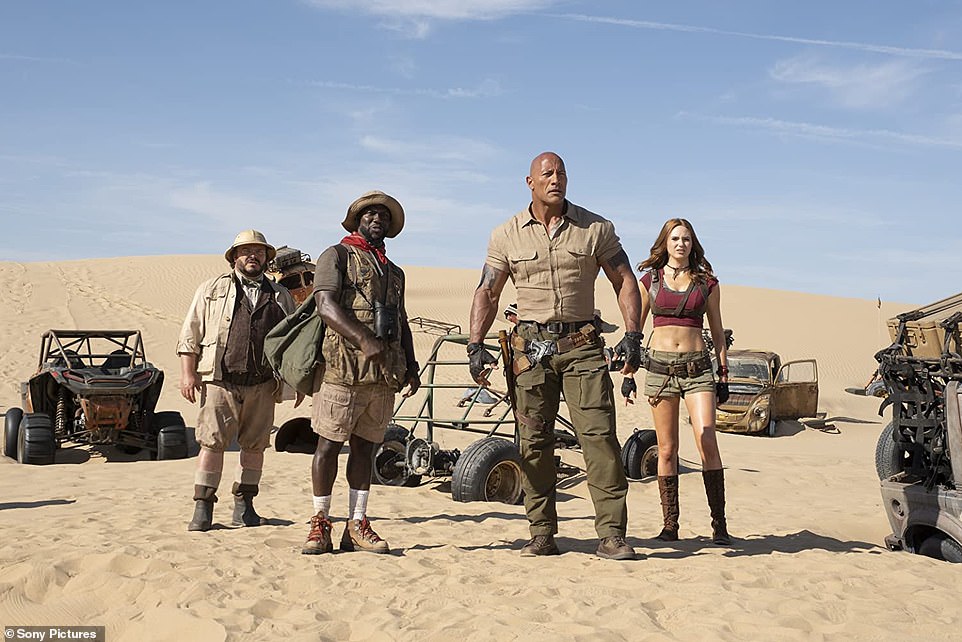 A scene from 2019’s Jumanji: The Next Level, which sees the return of, from the left, Jack Black, Kevin Hart, Dwayne Johnson, and Karen Gillan

More than two decades later, the first sequel, Jumanji: Welcome to the Jungle, was released. This time, the board game morphs into a video game. A group of teenagers are sucked into the virtual world of Jumanji, with Dwayne Johnson, Jack Black, Kevin Hart, and Karen Gillan playing their avatars as they battle a villain in the hopes of saving Jumanji – and escaping the game.

Two years later Jumanji: The Next Level hit cinemas, following the same group of teenagers as they yet again get trapped inside the game – this time with Danny DeVito and Danny Glover joining the cast.

In April, the world’s first Jumanji ride opened at Italy’s Gardaland Resort, which lies to the west of Verona on the shores of picturesque Lake Garda.