Britain’s trains were today the busiest on a Monday since the pandemic began as workers commuted into the office and went on leisure journeys to celebrate Freedom Day – but road congestion remained unchanged.

The Trainline website reported more bookings for travel this Monday than any other Monday in the last 16 months, with tickets sold for this week up 26 per cent on two months ago as Covid-19 restrictions lifted in England.

Face masks are no longer mandatory on trains in England, but Transport for London has made them compulsory for its services including the Underground, Overground and buses following a plea from Mayor Sadiq Khan.

It comes amid a ‘pingdemic’ with an estimated 1.7million people now self-isolating, many of whom have been pinged by the NHS Covid-19 app, which has been affecting staffing on train services on some routes.

Among the train companies affected by isolating staff in recent days have been West Midlands Railway which has warned of delays after its number of staff having to self-isolate has quadrupled in recent weeks.

Further to this, rush-hour commuters on the London Underground today faced delays on the Metropolitan and Central lines this morning due to a series of train cancellations after many drivers were pinged.

Congestion on the capital’s roads was at 41 per cent during rush-hour this morning – which was roughly in line with the 8am figure last Friday (40 per cent), according to data from location technology firm TomTom.

But it was also down on last Thursday (49 per cent), Wednesday (52 per cent) and Tuesday (48 per cent) – while it was also well below the peak congestion level on Saturday of 51 per cent at 1pm. 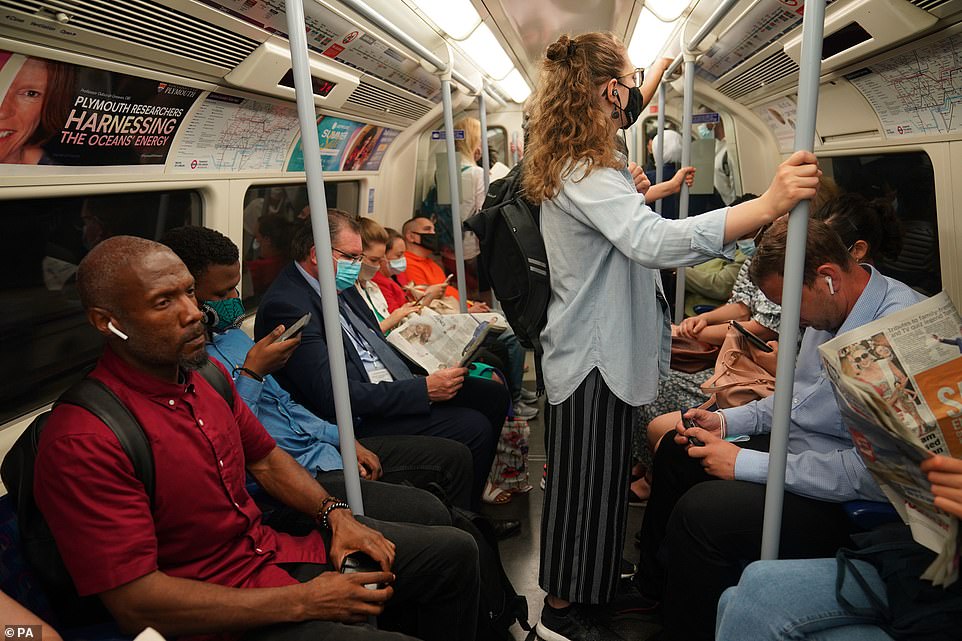 Commuters travel on a London Underground Jubilee line train towards Westminster at about 8.10am this morning 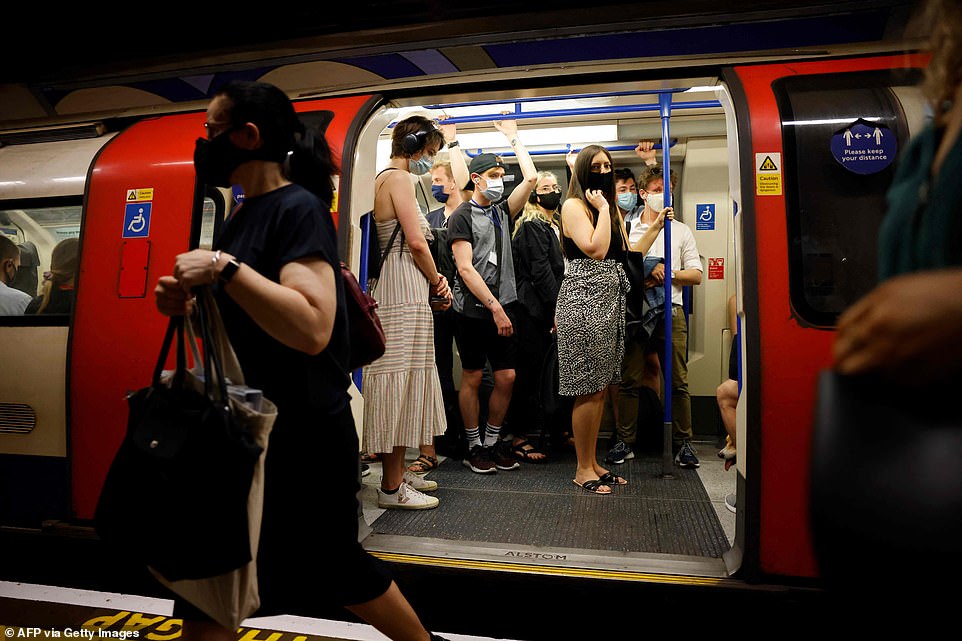 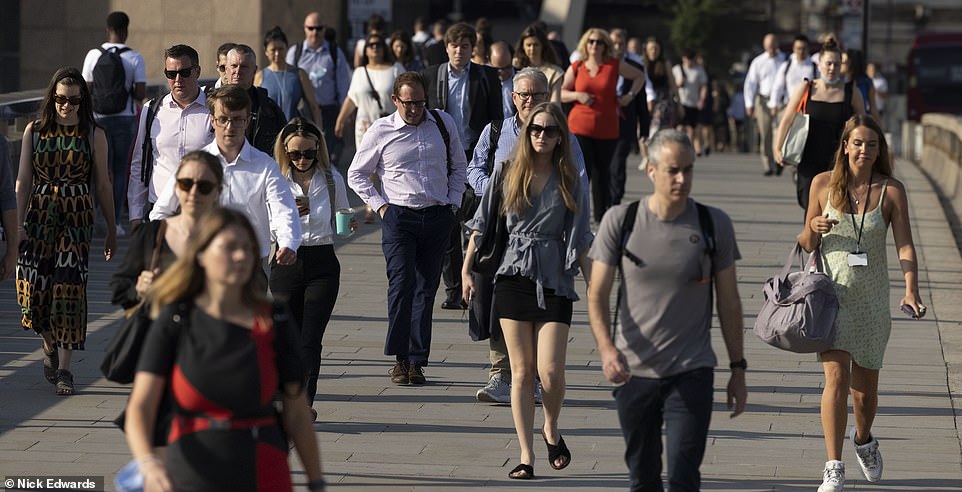 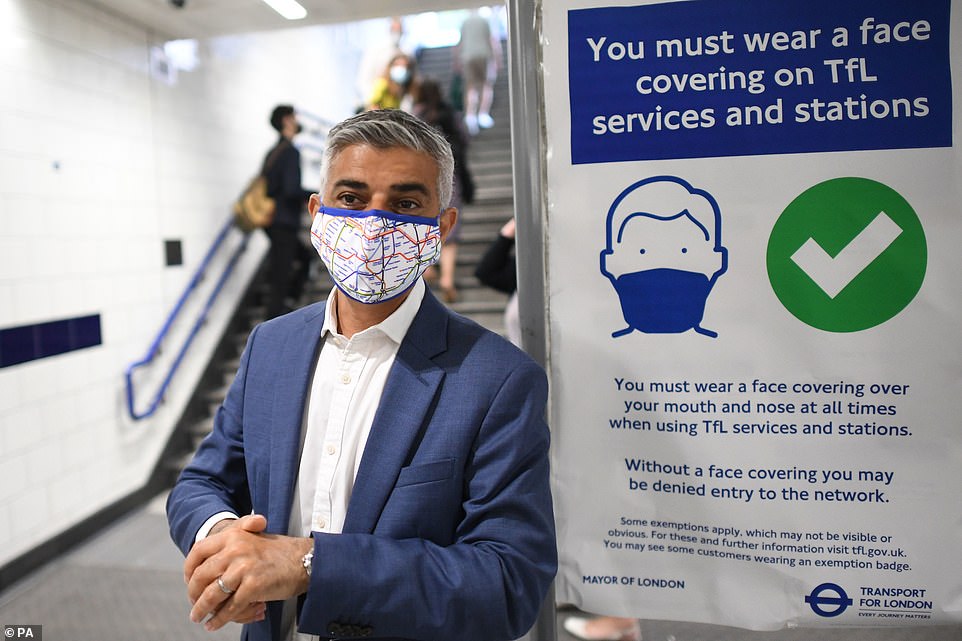 Congestion on the capital’s roads was at 41 per cent during rush-hour this morning – which was roughly in line with the 8am figure last Friday (40 per cent), according to TomTom. But it was also down on last Thursday (49 per cent), Wednesday (52 per cent) and Tuesday (48 per cent) – while it was also well below the peak congestion level on Saturday of 51 per cent at 1pm

Emma Gibson, director of transport watchdog London TravelWatch, told MailOnline: ‘Many people returning to public transport as part of the final phase of unlocking will want to avoid busy routes and times.

‘So it’s really important that train companies and TfL provide the best possible, localised travel information about the busyness of their train or bus, so that people can make informed choices about when they feel most comfortable to travel.’

It comes as Boris Johnson appealed to people to exercise their new freedoms with caution as most mandatory lockdown restrictions in England are finally lifted.

Social-distancing rules which, in one form or another, have governed people’s lives for over a year finally ended this morning at one minute past midnight.

Face masks are no longer mandatory in shops and on public transport, limits on gathering have gone and the work from home guidance has ended.

Nightclubs, theatres and restaurants can fully reopen, while pubs are no longer restricted to table service only. 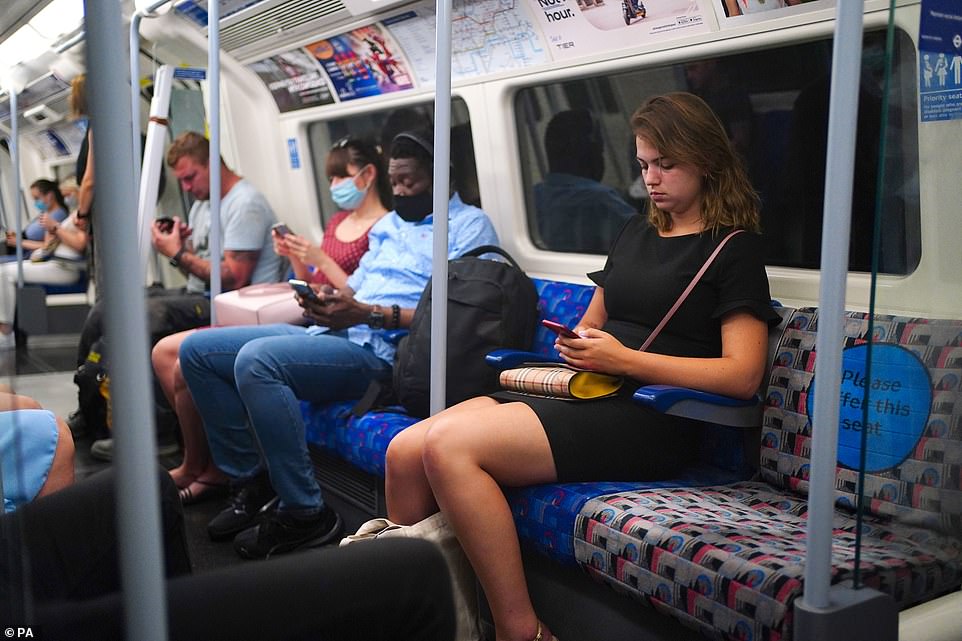 Commuters look at their phones on a Jubilee Line train at 8.50am in London this morning on so-called ‘Freedom Day’ 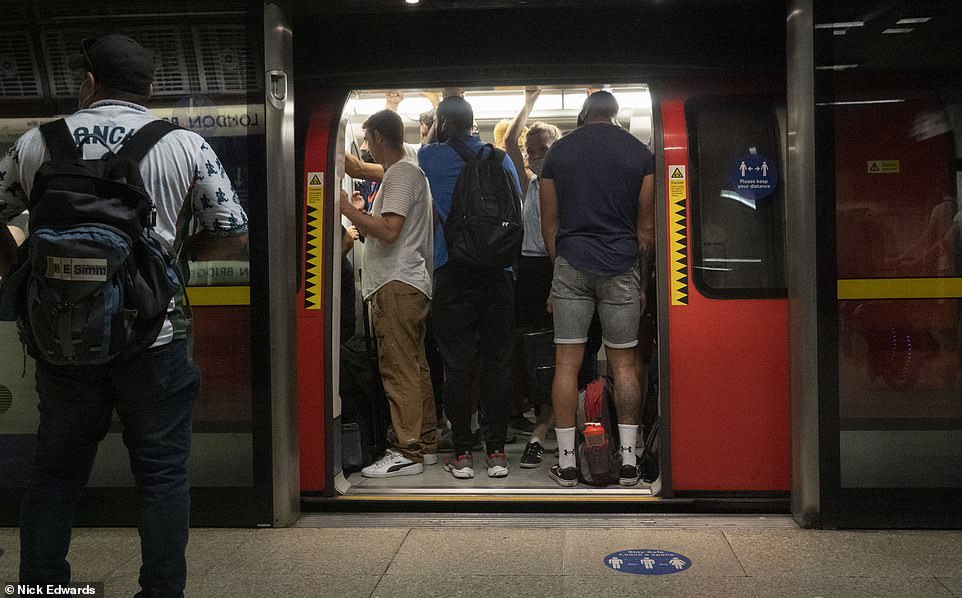 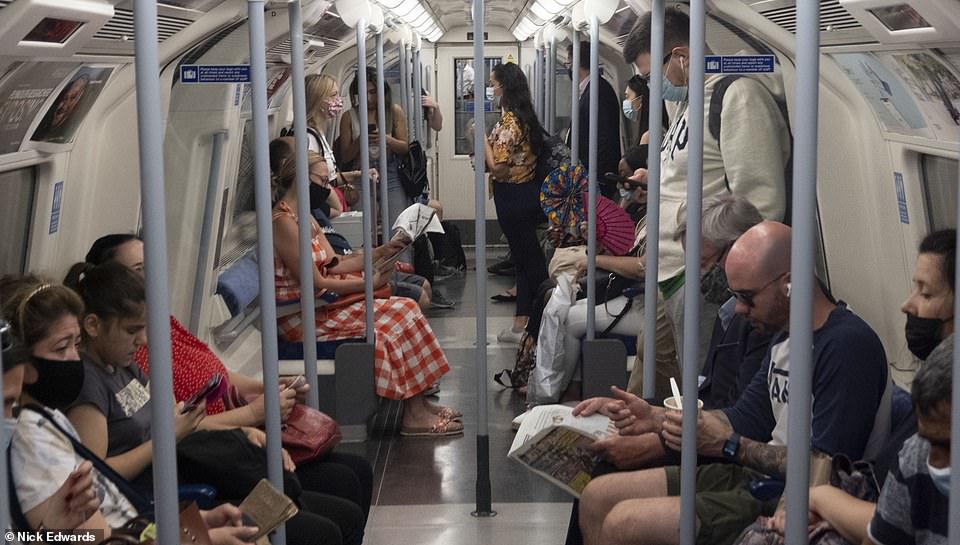 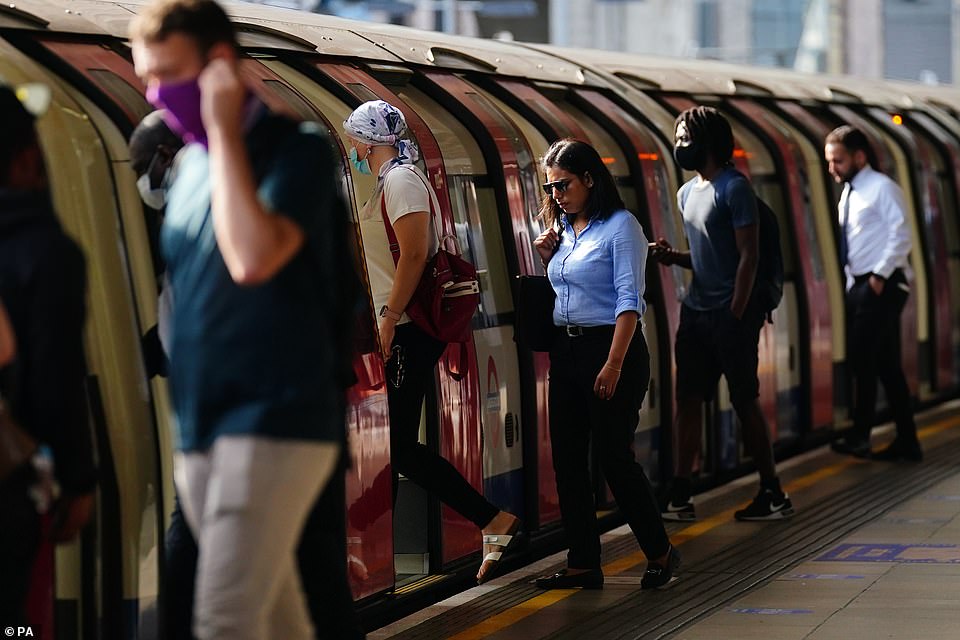 Commuters get on a Jubilee line train at 8.43am this morning at Canning Town station in East London 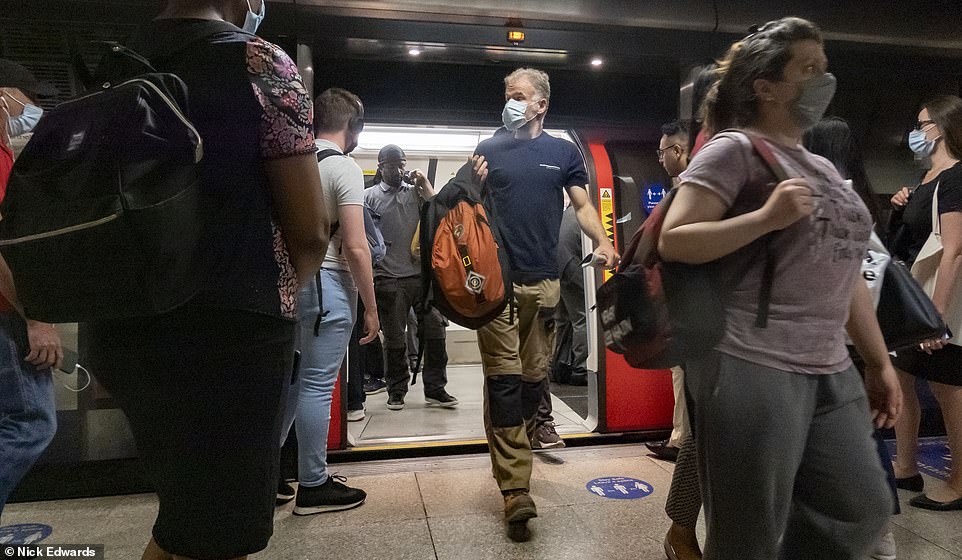 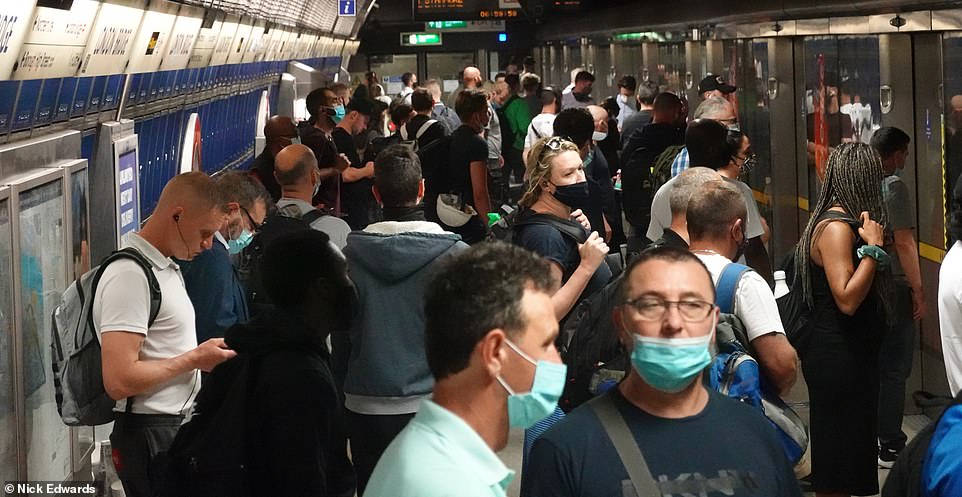 But with Covid-19 cases continuing to soar and renewed warnings about the pressure on the NHS, there was no mood of celebration in Government.

Mr Johnson is spending so-called ‘freedom day’ self-isolating at his official country residence at Chequers after being ‘pinged’ by NHS Test and Trace following a contact with Health Secretary Sajid Javid, who subsequently tested positive for the virus.

Mr Johnson and Chancellor Rishi Sunak, who also met Mr Javid on Friday, initially tried to get round the requirement to quarantine by saying they would join a daily workplace testing programme being trialled by the Cabinet Office.

However they were forced into a hasty U-turn amid widespread public anger at their ‘special treatment’ while tens of thousands of people were being forced to miss work or school and stay home.

Mr Johnson will self-isolate until July 26, which will include the final Prime Minister’s Questions before the Commons goes into recess, and the two-year anniversary of him entering No 10, which is on Saturday. 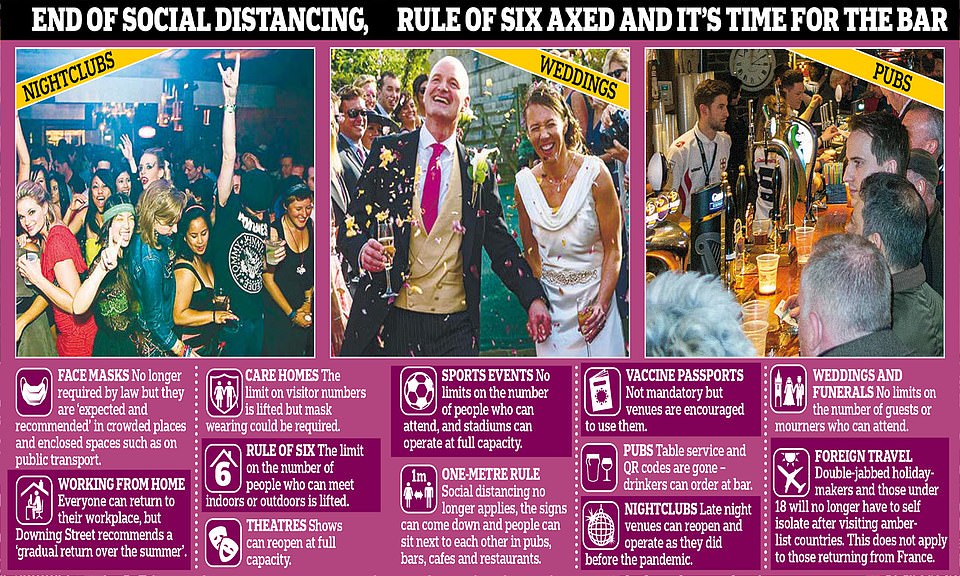 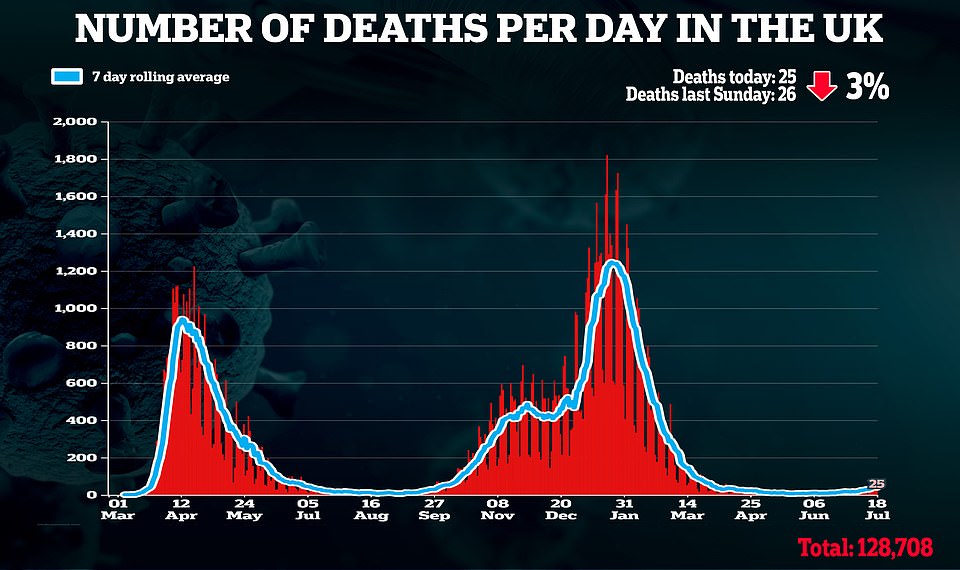 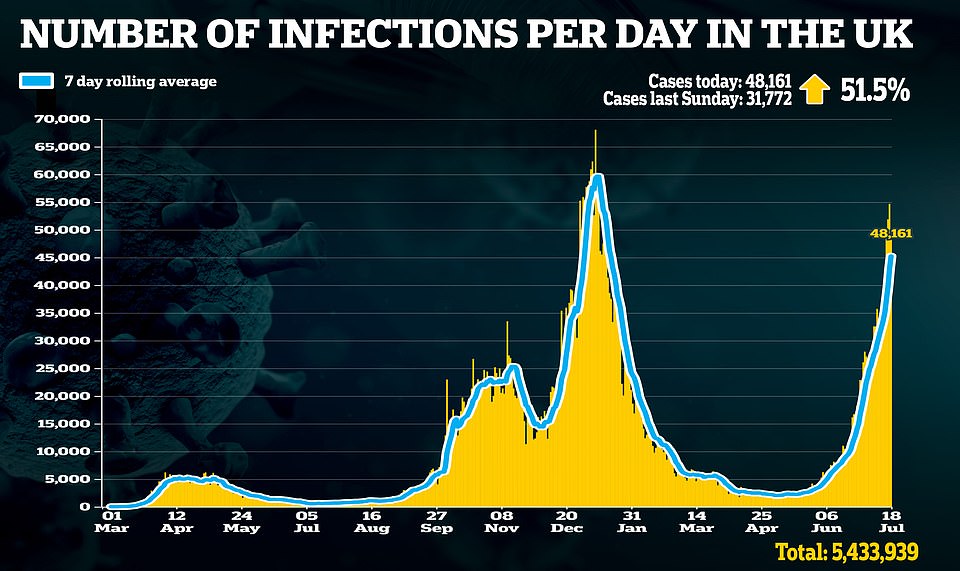 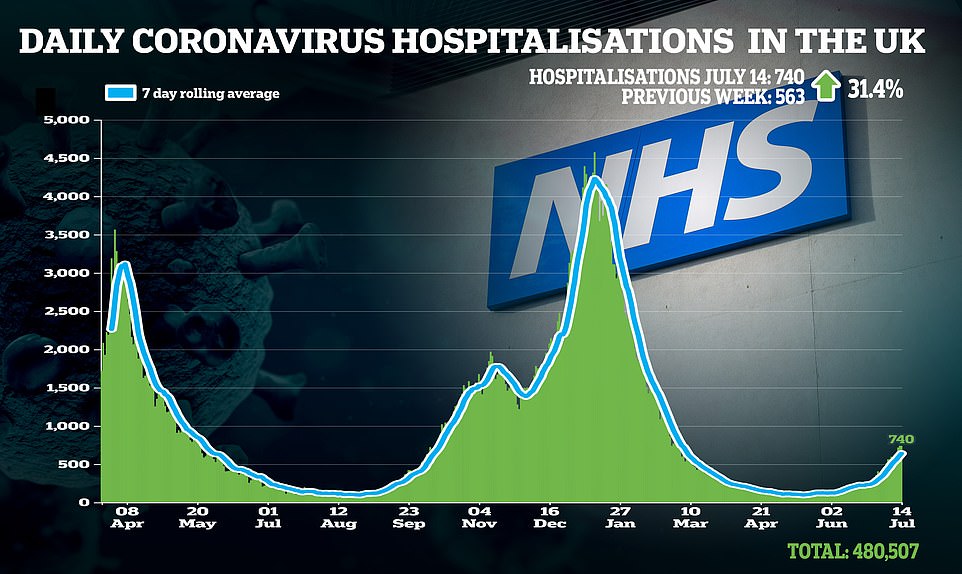 With new cases of the virus already having passed the 50,000-a-day mark, some scientists have expressed concern at the ending of restrictions while the Delta variant is spreading so rapidly.

Meanwhile in Scotland, where restrictions have been eased but not lifted, First Minister Nicola Sturgeon also emphasised the need for caution.

The whole of the country has dropped to the lowest level of its five-tier system with social-distancing reduced to just one metre, although face coverings remain mandatory in shops and on public transport.

Ms Sturgeon said talk in England of ‘freedom day’ was ‘not sensible’ and that it was important to ease up on restrictions gradually.

It follows a series of rule changes in Wales which came in on Saturday, while in Northern Ireland regulations are expected to ease from July 26.