By Hugo Duncan for the Daily Mail

Stock markets tumbled and bitcoin crashed to a six-month low as fears of conflict in Ukraine and the prospect of higher interest rates spooked investors.

That wiped £68billion off the value of Britain’s 350 leading listed companies while the Dow Jones Industrial Average shed more than 1,000 points in early trading before recovering in New York.

The FTSE 100 recovered some ground on Tuesday morning, rising 1 per cent by 10.30am, with commodity-linked energy stocks leading gains as fears of a military conflict, coupled with risks in the Middle East, pushed crude futures higher.

George Godber, a fund manager at Polar Capital, said the ‘chilling hand’ of Vladimir Putin was being felt on the financial markets as 100,000 Russian troops wait at the border with Ukraine.

Russian stocks were also hit with Moscow’s benchmark Moex index down nearly 6 per cent – taking losses for the year to 15 per cent.

Analysts warned of further turbulence this week as the US Federal Reserve meets to discuss interest rates and Microsoft, Tesla and Apple deliver results.

Business activity in Britain cooled to an 11-month low after fresh curbs were brought in to stem the spread of Omicron.

Research group IHS Markit’s index of activity in the UK – where scores above 50 show growth – fell to 53.3 in January.

The eurozone also clocked up its weakest score for 11 months – 52.4 – as Covid restrictions hit business.

But the UK economy is expected to bounce back after the lifting of restrictions.

And speculation is mounting that the Bank of England will raise interest rates next week.

Craig Erlam, senior market analyst at trading firm Oanda, said: ‘It could be a make-or-break week for the markets, with the Fed meeting tomorrow, big tech earnings, and tensions on the Ukraine-Russia border. It could get much worse before it gets better.

‘The Fed needs to strike the right balance between taking inflation seriously and not wanting to cause further unnecessary turmoil in the markets. Not an easy balancing act.’

The losses in London were echoed around the world with the Dow, S&P 500 and technology-heavy Nasdaq on Wall Street off as much as 5 per cent before bouncing back; the Dow closed 0.3 per cent up.

The Nasdaq, which also rallied, is suffering its worst month since October 2008 during the depths of the last financial crisis.

In Europe, major benchmarks in Frankfurt, Paris, Milan and Madrid were down more than 3 per cent.

The sell-off was not confined to stock markets, however, with bitcoin down as much as 10 per cent to below $33,000 – its lowest level since July. The cryptocurrency has lost half its value since peaking above $68,000 in November.

Victoria Scholar, head of investment at Interactive Investor, said: ‘It looks like the bubble has burst as panic selling grips the [crypto] market. 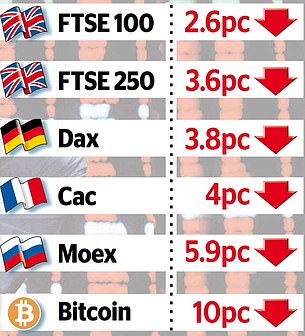 Brave traders might use this major repricing as an opportunity to buy the dip.’ Investors have suffered a turbulent start to the year with technology stocks that soared during the pandemic falling sharply as economies reopen and interest rates rise.

The Bank of England has already raised rates from 0.1 per cent to 0.25 per cent in December and could do so again next week. The Fed has also signalled that rate hikes are on the way in the US.

The prospect of higher interest rates has hit technology stocks in particular as investors worry it will dampen growth – making these share prices look too high following the recent rally.

Apple became the first $3 trillion-valued business in the US at the start of 2022 having seen its value triple in less than four years.

But the stock has since lost 13 per cent of its value – or £290billion. Moderna, a darling of the stock market last year after making a Covid vaccine, and lockdown winner Netflix have fallen more than 40 per cent this year.

Morgan Stanley strategist Michael Wilson said tech shares became overvalued in the pandemic and the sell-off was ‘appropriate not just because the Fed is pivoting but because these kinds of valuations don’t make sense in any investment environment’.

British savers with money in funds exposed to tech stocks have also suffered. Scottish Mortgage Investment Trust – whose biggest holdings include Moderna – fell another 8.6 per cent yesterday; it has lost more than a third in value since November.