Pounded at the pump: UK map reveals where drivers will be hardest hit by the 12p-per-litre fuel duty rise this March

By Natasha Anderson For Mailonline

Drivers outside of London are going to be hardest hit by Jeremy Hunt’s proposed 23 per cent fuel duty increase in March this year.

Fuel duty could soar by 12p-per-litre this spring and ‘disastrously hurt’ drivers outside of the capital who spend twice as much on petrol than Londoners, analysis revealed.

Residents in the East Midlands, West Midlands and the North East are expected to feel to the impacts of the hike the most, according to data collected by FairFuelUK.

Analysts predict the fuel tax increase will cause economic damage by adding 2.3 per cent to inflation, cutting the GDP by 1 per cent and result in 31,000 job losses.

Fuel duty could soar by 12p per litre this spring and ‘disastrously hurt’ drivers outside of the capital who spend twice as much on petrol than Londoners, analysis revealed

London households spend 2.2 per cent of their expenditure at the petrol pumps, FairFuelUK researchers revealed to MailOnline.

But more than 90 per cent of all household fuel spending occurs outside of the capital and in all other regions spending on motor fuel is at least 50 per cent higher as a percentage of spending than in London.

Householders in the East Midlands fork out 4.4 per cent of their expenditure for petrol.

Those residing in the West Midlands and the North East are expending 4.3 per cent of funds on fuel.

FairFuelUK founder Howard Cox also branded the tax hike as ‘regressive,’ arguing that the poorest 10 per cent of the population spend proportionately more than twice as much on fuel as the richer groups.

The poorest tenth of drivers spend 7.2 per cent on fuel compared to 3.3 per cent spent amongst the richest tenth, data has shown.

‘The Chancellor’s hush-hush 12p planned paralysing fuel duty hike, trumpeted by the OBR, is not only ruinous for the nation’s economic recovery, it will disastrously hurt drivers, who live outside planet London,’ Mr Cox alleged.

‘The capital’s fiscal decision makers, fail to grasp that there is much greater fuel usage per head in other parts of the country.’

Mr Hunt will make his final decision on a fuel duty hike in his March 15th budget. 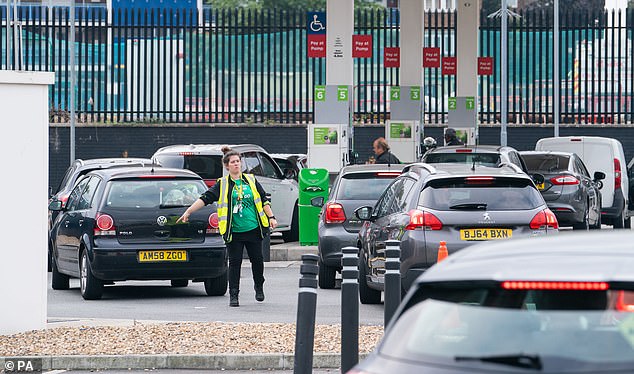 Households in the East Midlands, West Midlands and the North East are expected to feel to the hardest impacts of the hike

The proposed petrol tax hike comes as the UK battles a cost-of-living crisis that has seen skyrocketing inflation and soaring energy bills.

Households across Britain are also being punished with a ‘stealth tax’ on their energy bills amounting to billions of pounds to pay for the bailout of dozens of electricity and gas supply companies.

The levy could rise further still if more companies go under.

Campaigners have condemned the increases to the levy, which has soared over the past 12 months.

The charge traditionally covers the daily cost of connecting customers to their gas and electricity supplies, and for the upkeep of networks.

The increase across all bill-payers is believed to be more than £2 billion.

The charge is a stand-alone levy and should not have been affected by the vast hikes in wholesale energy prices worldwide exacerbated by Russia’s invasion of Ukraine.

However, the standing charge rises were approved by industry regulator Ofgem to cover the cost of its bungled regulation of the market, which led to about 30 firms going bankrupt over the last couple of years.

Most perniciously, campaigners allege the charge is regressive – with cash-strapped pensioners living alone, and frugally, forced to pay as much as millionaires in large, well-heated homes.