UK inflation increased to 0.7 per cent in January because of higher food prices and more expensive household goods as shops offered fewer discounts on major items like beds and sofas

UK inflation increased last month on the back of higher food prices and more expensive household goods, according to new official data.

The Office for National Statistics (ONS) said Consumer Prices Index (CPI) inflation increased to 0.7 per cent in January, up by 0.1 per cent on the 0.6 per cent recorded in December.

The figure was ahead of analyst expectations, with a consensus of economists having predicted inflation of 0.5 per cent for the month.

The increase has been partly blamed on retailers offering fewer New Year discounts than they normally would on major items like sofas and beds, perhaps because of the coronavirus pandemic.

Office for National Statistics data published this morning showed UK inflation increased by 0.1 per cent in January to 0.7 per cent 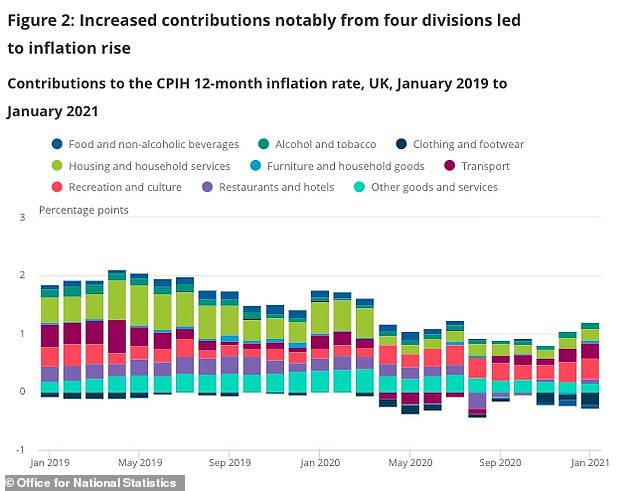 ‘Household goods also pushed up prices with less discounting this year on items such as bedding and settees.’

The ONS also flagged that there was volatility in fish prices following the end of the post-Brexit transition period on January 1, with price increases for prawns, frozen fish fingers and fresh salmon.

It said the largest contribution to the increase in inflation came from furniture and home furnishings, as the sector saw significantly reduced discounting on leather settees and double beds.

Mr Athow added: ‘There were widespread January sales, with particular price cuts for clothing and footwear.’

The price of clothing and footwear slid overall by 4.8 per cent for the month, according to the ONS data.

This meant the downward contribution to the CPIH 12-month inflation rate from clothing and footwear increased to 0.22 per cent in January 2021.

The Retail Price Index (RPI), a separate measure of inflation, increased to 1.4 per cent from 0.9 per cent in December. 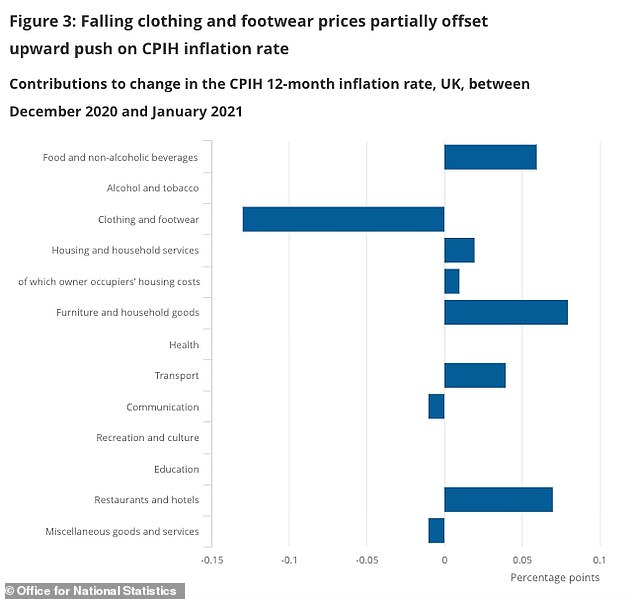 Food prices increased by 0.06 per cent between December and January while the cost of clothing fell

The CPI, including owner-occupiers’ housing costs (CPIH) – the ONS’s preferred measure of inflation – was 0.9 per cent in January, up from 0.8 per cent last month.

Laith Khalaf, financial analyst at AJ Bell, said: ‘While the headline CPI rate is glacially cool, the debate between inflation and deflation is raging.

‘Commodity prices have been creeping up, and the market seems to be buying into a global economic recovery, with cyclical stocks performing well.

‘Combined with the huge amount of monetary and fiscal stimulus pumped into the economy, that suggests that inflationary pressures may be brewing.’