A decision by health officials to reject a breast cancer drug given to extend the life of women with an incurable form of breast cancer has been called a ‘devastating blow’ for thousands of women, a charity said.

The National Institute for Health and Care Excellence (NICE) decided not to recommend the drug combination of abemaciclib and fulvestrant, known as Verzenio, for routine use on the NHS in England.

It cites a lack of cost-effectiveness because the treatment costs almost £3,000 a month per patient.

Use of the drug in people with an incurable form of breast cancer found it delays the need for chemotherapy and gives afflicted individuals an extra nine months of life.

It has been available since 2019 via the Cancer Drugs Fund (CDF) which provides access to experimental treatment and has so far been given to 876 women.

Breast Cancer Now charity believes NICE’s non-recommendation will see thousands of women in the future be left without access to this drug.

A decision by health officials to reject a breast cancer drug has been called a ‘devastating blow’ for thousands of women, the Breast Cancer Now charity said

Women who work outdoors and are regularly exposed to high levels of sunlight are less at risk of developing breast cancer, a new study shows.

Danish researchers found that women who spent more than 20 years working outdoors had a 17 per cent lower chance of a breast cancer diagnosis.

The team hypothesises that the effect may be due to higher levels of Vitamin D, which is made by the body when it is exposed to sunlight.

The most up to date figures for breast cancer in the UK comes from 2017 via the Office for National Statistics and reveals breast cancer was the most common cancer in England, accounting for 15.1 per cent of all new diagnoses.

Abemaciclib with fulvestrant is used to treat patients with hormone receptor positive HER2 negative secondary breast cancer after prior endocrine (hormone) therapy.

Breast cancer has become the most commonly diagnosed cancer type in the world, the World Health Organisation revealed earlier this week.

According to the WHO’s International Agency for Research on Cancer (IARC), breast cancer in both sexes made up 11.7 per cent of all new cancer cases globally in 2020.

This figure compared with 11.4 per cent for lung cancer, 10 per cent for colorectal cancer, 7.3 per cent prostate cancer and 5.6 per cent stomach cancer.

In 2020, 2.3 million cases of breast cancer in women alone were diagnosed worldwide, while about 685,000 deaths occurred from breast cancer.

Taken as a twice-daily pill, Verzenio is part of a class of drugs called CDK4/6 inhibitors, which block cancer cell proteins.

This prevents the cells from dividing and growing, delaying the progression of the disease.

NICE said if this recommendation stays the same following public consultation, the treatment will be removed from the CDF.

Should this happen, patients already taking the drug will continue to get it but new patients will not be given it.

Charity Breast Cancer Now said it is ‘deeply concerning’ that patients could be denied the chance of benefiting from the treatment.

Data suggests people taking the combination of abemaciclib and fulvestrant have longer before their disease worsens and live longer than people with the alternative treatment, a combination of exemestane and everolimus.

For patients who have received prior hormone therapy, a major trial (MONARCH 2) found that giving abemaciclib in combination with fulvestrant extends the time before a patient’s condition progresses by 7.6 months on average.

But NICE criticised the data collection and said there is significant uncertainty around how well the drug will work in clinical practice. 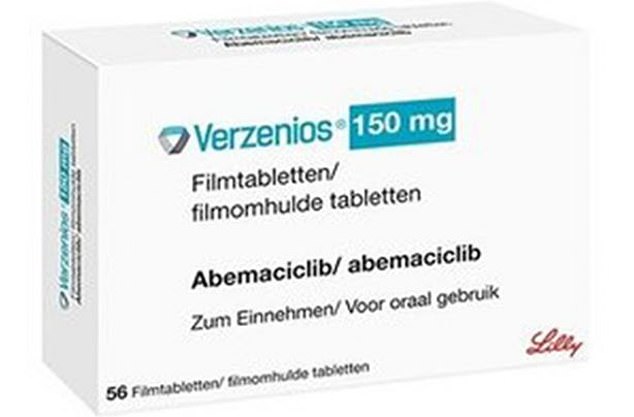 The National Institute for Health and Care Excellence (NICE) decided not to recommend the drug combination of abemaciclib and fulvestrant, known as Verzenzio, for routine use on the NHS in England

A simple test has been developed which can detect womb cancer from self-administered vaginal swabs or urine.

Signs of the cancer —the fourth most common among women in the UK — can be seen through a microscope as malignant cells are captured by the sample.

In a proof-of-concept study, researchers used the new method and identified 98 of 103 cases of women who had been diagnosed with the disease.

It also was able to correctly spot when a patient did not have womb cancer 88.9 per cent of the time.

They add that it is unclear how long people would have treatment for, and therefore how much the treatments would cost.

NICE said it normally costs £2,950 for a packet of 56 150mg tablets, but Eli Lilly, the drug manufacturer, has purportedly agreed a confidential NHS discount.

Baroness Delyth Morgan, chief executive at Breast Cancer Now, said: ‘Today’s news that NICE has been provisionally unable to approve abemaciclib with fulvestrant for routine use on the NHS following its time on the Cancer Drugs Fund is a devastating blow for thousands of women with incurable secondary breast cancer who could benefit from this innovative treatment in future.

‘Crucially, the side effects of this combination treatment differ to those of other CDK4/6 inhibitors, and may be more tolerable for some women, so it’s vital new patients have this treatment option available to them, to help improve their quality of life during the treasured extra months the treatment can give them.

‘The treatment can also help delay patients needing chemotherapy and enduring its associated side effects such as hair loss and cognitive impairment.

‘Abemaciclib with fulvestrant is an example of continued advances in treatment and care for secondary breast cancer and it’s deeply concerning that new patients could be denied the chance to benefit from this progress.

‘Whilst treatment will continue for women currently receiving it, Nice, NHS England and Lilly UK must work swiftly together to explore all possible solutions to see this provisional decision reversed, including considering additional discounts.

‘Unless this happens, patients in the future will pay the price of being denied the precious chance this treatment brings to live well for longer.’