EXPRESS INFORMER > News & Politics > UK economy to shrink 11% with unemployment at 2.6m, B of E warns

Britain’s economy will shrink by 11% and unemployment will rise to 2.6million amid Boris Johnson’s latest lockdown, bank of England warns

The UK economy has been put into reverse by Boris Johnson’s latest national lockdown, the Bank of England warned yesterday.

As tough new Covid-19 restrictions were imposed across England, the central bank slashed its forecast and said the recovery would take longer than previously feared.

Governor Andrew Bailey said the Bank now expected the economy to shrink again in the final three months of the year, having grown strongly between July and September as earlier lockdown measures were eased.

He said economic output would be 11 per cent lower at the end of the year than it was at the start, and that unemployment would rise from the current level of 1.5million to 2.6million.

Governor Andrew Bailey said the Bank now expected the economy to shrink again in the final three months of the year, having grown strongly between July and September as earlier lockdown measures were eased. Pictured: Empty streets in Soho this evening

Unveiling plans to pump another £150billion of emergency funds into the economy, Mr Bailey said: ‘We are here to do everything we can to support the people of this country – and we’ll do it and will do it quickly.’

He said the UK had never seen such economic disruption in peacetime, adding: ‘Even then, these numbers are unprecedented in terms of the scale.’

Critics of the latest restrictions seized on the forecasts. Tory MP Steve Baker, a member of the Commons Treasury committee, said such stark projections were one of the key reasons why he had voted against them this week.

But he added: ‘If we are to end this lockdown and all the harm it does we must now all comply. The situation could scarcely be more serious for people’s livelihoods.’

The Bank said it now expects the economy to shrink by 2 per cent over the last three months of this year, having previously forecast growth of 3.5 per cent.

This will leave the economy 11 per cent smaller by the end of 2020 than it was at the start – much worse than the 5.4 per cent contraction the Bank was expecting. 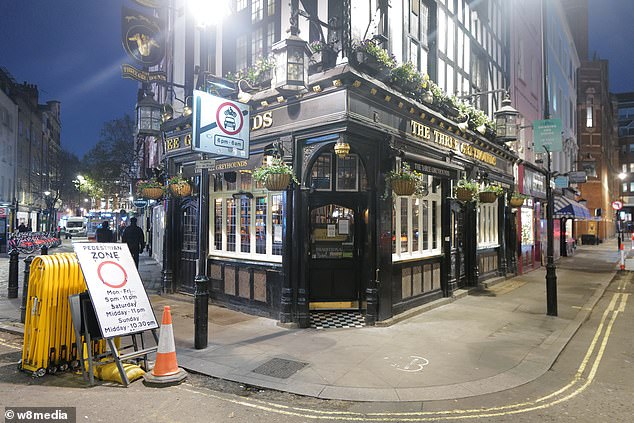 He said economic output would be 11 per cent lower at the end of the year than it was at the start, and that unemployment would rise from the current level of 1.5million to 2.6million. Pictured: A closed pub in Soho tonight

And despite the extension of the furlough scheme announced by Chancellor Rishi Sunak yesterday, the peak unemployment rate will now likely be even higher than the 7.5 per cent initially expected at 7.75 per cent. This would mean the second lockdown costing an extra 80,000 jobs, leaving 2.64million people out of work.

With the new lockdown forcing many businesses to close again, the Bank was expecting about 5.5million people to fall back onto the furlough scheme, up from some two million at the end of October.

The Bank said it expects the second lockdown to end on December 2, the deadline given by the Prime Minister, though it believes the UK will go straight back into the localised tier system.

It also predicted restrictions will be lifted further at the end of March next year, although the economy will not regain lost ground until the first three months of 2022, several months later than initially hoped.

Economists said, however, that the predictions looked ‘overly optimistic’. Ruth Gregory, senior UK economist at Capital Economics, said: ‘Our view is that it will take until 2023 for the economy to return to its pre-pandemic level.’

It came as the Bank restarted its quantitative easing money-printing programme to inject more cash into the economy. Mr Bailey said that another £150billion would be made available.