Barclays delivered a stunningly upbeat take on the UK’s prospects today, saying the economy is set to grow at the fastest rate since 1948.

Chief executive Jes Staley said he expects the recovery to be fuelled by consumers spending around £200billion they have saved during the grim lockdowns of the past year.

The ‘spectacular number’ comes after the UK suffered the worst downturn in 300 years due to Covid, with Mr Staley crediting the vaccine rollout and suggesting that the EU is likely to have a harder time.

However, he also warned there is likely to be a ‘price to pay down the road’ amid fears over stoking inflation and debt.

The comments came as Barclays announced its biggest quarterly profits in 13 years during the first three months of the year – recording a pre-tax profit of £2.4billion – on revenues of £5.9billion. 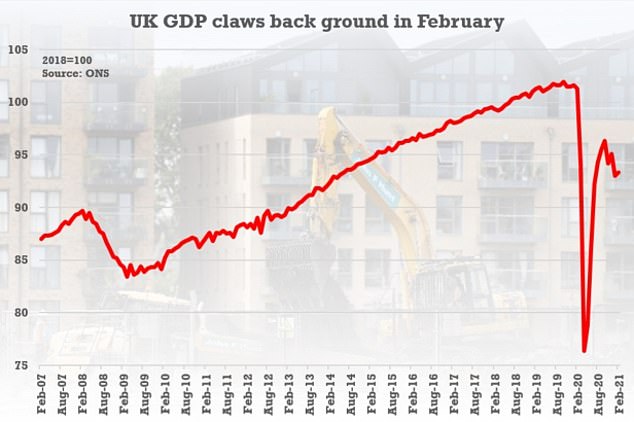 The bank said it benefited from a strong recovery in the stock market through its corporate and investment bank and also enjoyed a boost from its high street mortgage lending as homeowners took advantage of the stamp duty holiday.

Mr Staley told BBC Radio 4’s Today programme that the second half of 2021 could be ‘quite something’.

‘We estimate the UK economy will grow at its fastest rate since 1948. That’s pretty spectacular…

‘We calculate that there is some £200billion in deposits with banks that is in excess of what consumers would normally have.’

Mr Staley admitted that inflation could be a sting in the tail from a boom with governments still facing massive debts, but it was unlikely to materialise for several years.

He said: ‘Since the early days of the pandemic last year, our diversified business has demonstrated the resilience critical to ensuring Barclays’ financial integrity.’

Mr Staley added: ‘As we enter the next phase of this pandemic, we remain resolute in our commitment to support the economic recovery.

‘From our spend data, which captures UK economic activity across our cards and acquiring businesses, we are already seeing encouraging early signs of recovery in some sectors, including those hit hardest by the crisis.’