The UK has today confirmed 23,287 more positive coronavirus tests and 355 deaths, as around 13,000 people are now in hospital with the disease.

New cases are down five per cent from the 24,405 declared last Friday and lower than the 24,141 diagnosed yesterday.

Fatalities are the lowest since Monday but have surged 29.6 per cent since last Friday, when there were 274.

Department of Health data confirmed there were 12,999 people in hospital with Covid-19 on Wednesday, the most recent data, with 1,525 new admissions on Monday.

England started its second lockdown yesterday amid concerns rapid spread of the virus in September and October is leading to surging hospital admissions across the North of England and sparking fears the NHS could be overwhelmed again.

But the move has proven controversial as streams of data from various sources – some official and some not – seem to show that the local lockdown policy was working.

The Office for National Statistics today recorded the first decline in five weeks in its estimated of daily new infections in England, predicting that 45,700 people caught the virus each day last week, down from 51,900 the week before.

A weekly Public Health England report showed that rates of infection declined in more than half of local authorities during half term and experts say there is proof the three tier system was working and the peak of the second wave may even have passed already. 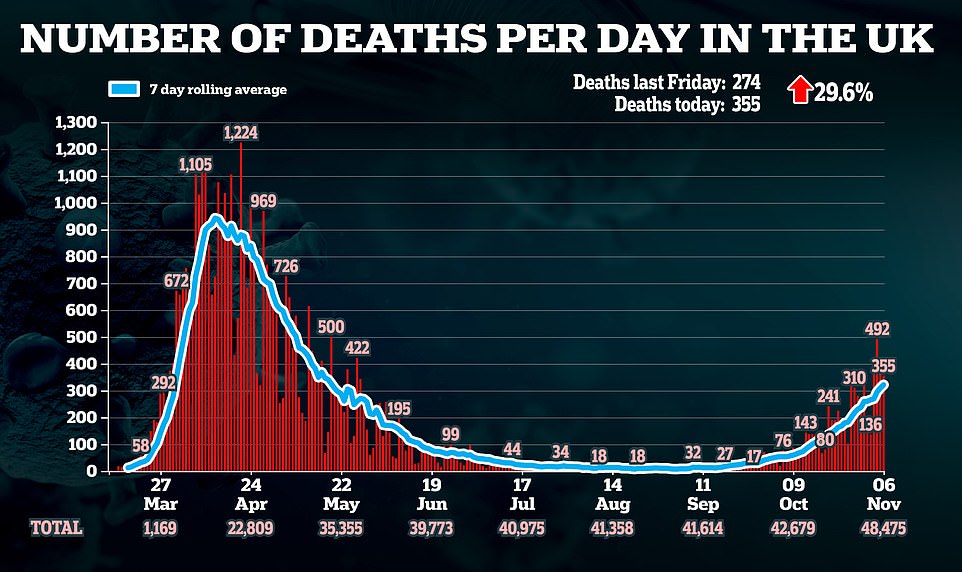 Today’s increase in cases comes as a range of data points to a turning point in the UK’s outbreak.

England’s second lockdown began yesterday but estimates of infections happening across the country suggest that the outbreak had already started to come under control, with fewer people expected to be catching the illness than in previous weeks.

Promising figures published by the Office for National Statistics (ONS) – which runs a massive government surveillance scheme that randomly swabs tens of thousands of people to track the size of the outbreak – suggest that 45,700 people caught Covid-19 each day last week in England.

The number dropped 12 per cent in a week from 51,900 for the previous week and accounts for the period up to October 31 – the same day Boris Johnson announced the country was heading into another economically-crippling lockdown.

The ONS’s estimates are based on tests done over a two-week period, and then compared with those taken over another month before that.

For this reason it still describes positive test rates as increasing – because the most recent two-week period has increased on the two-week period before that – even though there was a decline in the last seven days.

‘The infection rate has increased in recent weeks, but the rate of increase is less steep compared with previous weeks,’ today’s report said.

It added: ‘There have been increases in positivity rates in all age groups, except among older teenagers and young adults where rates now appear to be levelling off; however, the highest rates continue to be seen in this group.

‘There have been increases in positivity rates in all but one region (the North East) in England over the last two weeks; the highest Covid-19 infection rates remain in the North West and Yorkshire and The Humber.

‘During the most recent week (25 to 31 October 2020), we estimate there were around 8.38 new Covid-19 infections for every 10,000 people per day in the community population in England, equating to around 45,700 new cases per day; incidence appears to have stabilised at around 50,000 new infections per day.’

Experts today said the ONS’s figures, which are considered the most accurate at estimating the true size of the UK’s outbreak, were ‘welcome’ and promising.

‘Although the virus is still growing, it does appear to have stabilised… Importantly, these data present a picture consistent with the [Covid Symptom Study] data, that the virus is spreading at a constant rather than an increasing rate. This is evidence that the social restrictions prior to lockdown have had a real impact.’

He said that, if this is the peak of the second wave, he would not expect the death count to rise above 1,000 per day ‘for any prolonged period’, but that it was ‘very likely’ that it would be above 500 a day for a while.

Professor Naismith added: ‘Should next week’s data show a similar stabilisation or reduction, then we can be confident that the second wave has for now stabilised.’

Scientists cautioned that although the infection numbers appeared to move in the right direction, one week’s data was not enough to be sure of a trend. And the number of cases is still very high and will pile pressure on hospitals.

The University of East Anglia’s Dr Paul Hunter added: ‘Whether this turns out to be a temporary decline or a longer term trend, possibly as a result of the imposition of the three tier system, it is too early to say.

‘Nevertheless, these observations are very welcome and hopefully when the current lockdown ends we will continue to see a continuing decline throughout the rest of the year and into 2021.’

In other data suggesting England’s outbreak was already starting to slow before the lockdown started, MailOnline’s analysis of Public Health England (PHE) statistics showed more than half of local authorities scattered across England saw their infection rates fall at the end of October.

And rates even fell in areas that weren’t in Tier Two or Three lockdowns, suggesting national rules such as the 10pm curfew and rule of six were helping.

Other academics behind a symptom-tracking app are adamant the country’s second wave has already peaked and is over. Even SAGE – Number 10’s advisory panel which spooked ministers into adopting tougher action based on ‘inaccurate’ models – today admitted there is evidence outbreaks are slowing in ‘some parts’ of England.

The group of top scientists revealed the UK’s R rate has remained at between 1.1 and 1.3 for the second week in a row. It has fallen in five out of seven regions in England, including the North West, North East and the Midlands, where 10million people were already living under the toughest Tier Three curbs.

But amid growing calls on Number 10 to re-evaluate whether there is truly any need for the entire nation to be hit by the toughest rules since the spring, the Prime Minister’s spokesman said: ‘The lockdown is for four weeks to the 2nd December. As we have said the trend of hospital admissions are going up.’

It can take coronavirus patients several weeks to fall severely ill, meaning admissions and deaths will continue to spike because cases are still high. But eminent doctors and scientists argue wards are no busier than usual for this time of year and that there is still plenty of space across the nation to treat the infected.