The satellites were all built in Scotland by global data and analytics company Spire, with the help of £6 million in government funding.

They were successfully transported into space on a Soyuz launcher from the Plesetsk Cosmodrome in Russia at 12.25pm UK time, the UK Space Agency confirmed to MailOnline.

Two of the nanosatellites have on-board supercomputers, with machine learning algorithms that can provide ‘hyper-accurate predictions’ of the locations of boats.

The other two will be used to forge inter-satellite links, the UK Space Agency told MailOnline.

Once in low-Earth orbit, they will come part of a constellation of more than 100 satellites, which are used to calculate boats’ arrival times at ports and help businesses and authorities manage busy docks.

Spire nanosat with supercomputer under construction. The on-board supercomputer with machine learning algorithms that provide predictions of the locations of boats

‘A satellite the size of a shoebox may sound like a gimmick, but these nanosatellites are driving a revolution in how we observe planet Earth – with each holding the power and intelligence of a regular satellite.

‘The government is ensuring the UK remains at the forefront of this revolution and the Spire nanosatellites we have backed will help us do just that.’

The devices are designed, built, tested, integrated and assembled by Spire Global staff at the firm’s headquarters in Glasgow.

Spire received more than £6 million in funding from the UK Space Agency to build the nanosatellites.

They will join a fleet of more than 100 objects in low Earth orbit that work together to track the whereabouts of ships and predict global ocean traffic.

The two satellites that do not have on-board supercomputers will be used to forge stronger links between satellites in the constellation.

‘These connections allow satellites to act as relays, sending data to one another and down to ground stations, which cuts the time between data collection and its delivery,’ the UK Space Agency said. 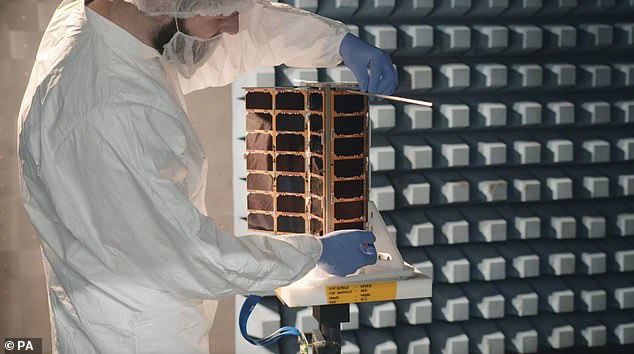 The nanosatellites, which received more than £6 million in funding from the UK Space Agency, will join more than 100 other space objects providing support to maritime trade. Pictured is the nanosatellite with supercomputer 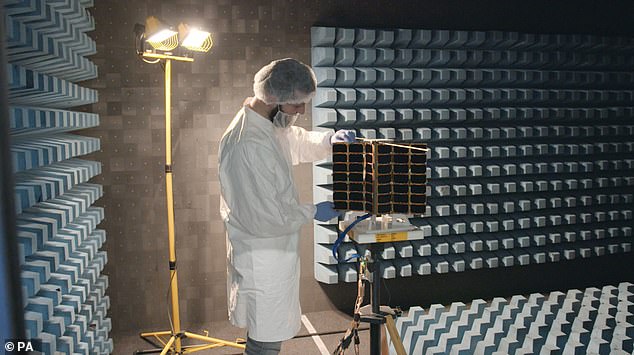 Spire Global is a data and analytics company that identifies, tracks and predicts the movement of the world’s resources and weather systems by ‘listening’ to the planet in real-time and applying machine learning to understand what will happen in the future

Despite being the size of a shoebox and weighing no more than standard cabin baggage, the nanosatellites have all the functionality of a conventional satellite.

Graham Turnock, chief executive of the UK Space Agency, said nanosatellites are enormously powerful in what they can do.

The ‘supercomputers’ in space have more than a teraflop of processing power. 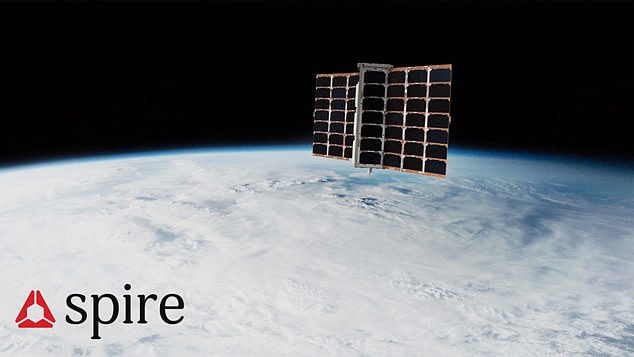 Artist’s impression of the spacecraft, which will join a fleet of more than 100 objects in low Earth orbit that work together to track the whereabouts of ships and predict global ocean traffic

‘Scotland’s space sector is booming. Our membership of ESA is benefiting companies across the UK, and we are committed to supporting the space economy in every region.’

Peter Platzer, chief executive and co-founder of Spire Global said their goal was to help companies and organisations predict ‘what’s next’ and make better decisions.

‘This month we are moving this forward by launching a true super-computer into orbit – 1 to 2 teraflops – so that we can analyse data right in orbit, using smart algorithms and machine learning,’ Platzer said. 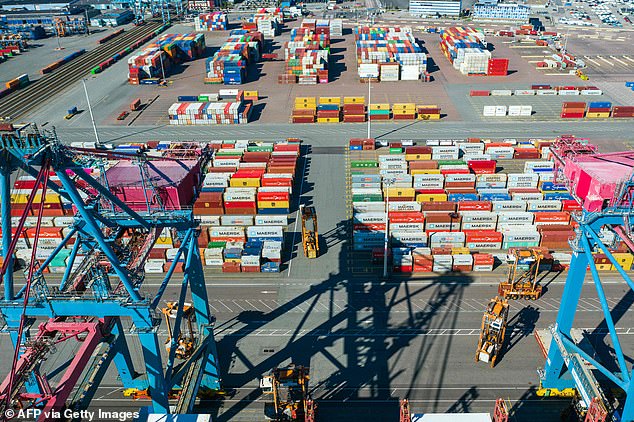 ‘This will allow us to get better, smarter and faster analytics to our customers for their business decisions.’

The services have been developed under a European Space Agency (ESA) Pioneer programme, which is a partnership project co-funded by the UK Space Agency.

Elodie Viau, Director of Telecommunications and Integrated Applications at ESA, said this was a prime example of the benefits of the Pioneer programme.

Artist’s impression of a UK spaceport. The UK Space Agency selected the first vertical launch site in Sutherland on the north coast of Scotland in 2018, which could be ready next year

Meanwhile, the government is also supporting the development of spaceports across the country, which will allow satellites to be launched from the UK soil for the first time in the coming years.

It’s hoped future nanosatellites could be launched from Sutherland, on the north coast of Scotland, as early as next year, with further sites planned for Cornwall, Glasgow Prestwick and Snowdonia.

Horizontal launch sites have potential in a future UK spaceflight market, which could attract companies from all over the world to invest in Britain.

The UK Space Agency has selected Sutherland, on Scotland’s north coast, as the site for Britain’s first spaceport.

The site is being developed by US aerospace and defence behemoth Lockheed Martin.

It will launch satellites and rockets into space as early as 2021.

Outside of the US, Scotland produces more satellites than any country.

The Sutherland project is under pressure from similar bids in Scandinavia.

The first Northern European site to offer commercial launches is set to hold a stake in the global space industry worth billions.