High street banks are ‘stifling’ start-up firms at birth by rejecting applications for business bank accounts because they are too busy processing Bounce Back loans for existing companies.

Most banks are not accepting new applications for business accounts or warning of long delays, in a development a business group warned could strangle Britain’s economic recovery.

Sophia Murday, who recently set up a greengrocer in an empty Glasgow shop, has been a customer for one mainstream bank for 20 years but still had her request for a business account delayed, and then rejected.

‘It is literally impossible to start a business if you can’t process cash flow through a bank account, take card payments and run books through connected software,’ the entrepreneur, 39, told The BBC.

‘There will be a lot of people, like me, who are looking to put savings and redundancy funds into new ventures in an environment where it is more or less impossible to find a job.’

High street banks are now advertising the restrictions on new business account openings on their websites.

Barclays say there will be a delay of six weeks for new applications, while Natwest and RBS only accepting requests from existing customers.

Lloyds, HSBC and Santander are not accepting any new business customers at all.

At the start of the crisis banks were heavily criticised for rejecting a large number of loan applications and taking too long to pay out on others.

MPs now say many are rejecting applications for Bounce Back loans under spurious rules.

Barclays was accused of ‘inventing’ rules for the scheme after rejecting multiple applications, City AM reported.

HSBC was the focus of particular criticism, with one small business calling its handling of the programme a ‘complete shambles’.

Gianfilippo Mattioli, boss of the Bottega Prelibato restaurant in Shoreditch, applied for a loan six months ago but is still yet to receive any money.

He initially asked HSBC for £50,000 but was asked to put in a second application. He has since heard nothing back.

‘It’s just a complete shambles,’ he said. ‘I don’t know what’s going on with HSBC, but you are always on the phone for at least an hour, and even then you don’t get through,’ he said.

‘I don’t understand why this is happening if the government is backing the scheme.’

The scheme was launched in April, and allows businesses to apply for up to £50,000, with the Government guaranteeing 100% of the loan, and no fees or interest to pay for the first 12 months.

Banks including Santander (top) and Natwest (middle) are not accepting new applications for business accounts. Business owner Dan Goldsmith (bottom) says he has struggled to open one

Mike Cherry, national chairman of the Federation of Small Businesses (FSB), said new businesses were vital to the recovery from the 2009 recession and needed accounts that were clearly separated from their personal ones.

He said: ‘We appreciate banks were swamped with bounce-back applications, but refusing to open business accounts for new customers will stifle start-ups just at the moment we need them most,’ he said.

Lloyds Bank forced 30,000 small company owners to open fee-paying business accounts to get Bounce Back Loans from the Government’s support scheme during lockdown, the competition watchdog has said.

At the end of April the Government announced the coronavirus Bounce Back Loan, which would lend small and medium sized businesses up to £50,000, as a means of supporting companies through the coronavirus pandemic.

The Competition and Markets Authority has revealed that small business customers, mostly sole traders, who had been running their companies’ finances out of a personal account, were forced to open a business current account to get a Bounce Back Loan from the Lloyds Bank.

No customers are thought to have been left out of pocket as fees are only charged after 12 months.

‘We need to see those who are starting-up and seeking to open a commercial account, and those who are established and seeking a bounce back, given guaranteed routes through which they can make applications that will be assessed swiftly.’

UK Finance said: ‘Bank staff are working incredibly hard to meet these significant levels of demand [from existing customers], meaning some new customers may currently face some delays when applying to open a business account.’

It recently emerged that five of Britain’s biggest lenders will pocket nearly £1 billion in a taxpayer-funded payout for supporting small businesses during the Covid pandemic.

An in-depth analysis of the government’s £38 billion loan scheme by the National Audit Office also showed that ‘significantly above’ £2 billion could have been paid out to fraudsters.

The report warned the fraud risk was high because of the speed at which the bounce back loan scheme was implemented earlier this year.

For instance, it took a month for bankers and officials to implement a system to ensure a business could not get more than one loan. This meant that up to 16,000 approved loans could have been duplicates, the report showed.

More than £38 billion bounce back loans of up to £50,000 each have been lent to close to 1.3 million companies. The Government guaranteed the loans and promised to cover the first year’s interest payments.

The British Business Bank (BBB), which was tasked with running the scheme, believes it will pay out £1.068 billion to the high street lenders that provided the cash. Around nine-tenths of this will go to the five banks that provided the lion’s share of the funding.

Barclays, HSBC, Lloyds/Bank of Scotland, NatWest/RBS and Santander paid out £31.3 billion of loans between them while 18 lenders others were responsible for £3.9 billion.

They will get all their money back, with interest, because the Government has promised to pay out if businesses default. 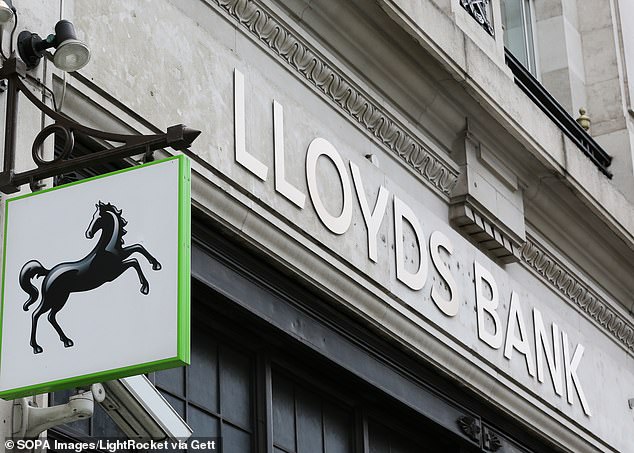 Lloyds forced 30,000 small business owners to open fee-paying accounts in order to access the Government’s Bounce Back Loan Scheme – which was introduced to support firms impacted by coronavirus

However, banks have also agreed not to charge fees on the loans, and some will likely be losing money on the low-interest loans. In fact some lenders decided not to participate in the bounce back scheme because the costs would outweigh the interest payments.

A spokesperson for bank trade body UK Finance said: ‘Business Interruption Payments under the Bounce Back Loan scheme are designed to offset any interest that would usually be charged to a business customer for a commercial loan.

How do the government’s Bounce Back loans work?

The Government announced the Bounce Back Loan Scheme in April as a means of protecting small to medium sized companies from the effects of the coronavirus lockdown.

By July a million firms had their applications accepted for loans totaling £30bn.

Applicants can apply for up to £50,000, with the Government guaranteeing 100% of the loan, and no fees or interest to pay for the first 12 months.

Any business is eligible, except for banks, insurers, public bodies and state-funded schools, as long as that company has not applied for another Covid-related loan scheme.

The loan lasts for six years, but can be paid back earlier.

They are therefore effectively a payment to the business not a subsidy for the lender. Lenders also agree not to charge any fees for setting up the loan or early repayment but will of course bear administrative and funding costs.’

The report also said Cabinet Office officials believe that fraud losses from the scheme are likely to reach ‘significantly above’ normal estimates for public-sector fraud of between 0.5% and 5%. This would mean that more than £1.9 billion has so far ended up in the pockets of fraudsters.

Bankers and officials have acted at breakneck speed to get money to struggling companies, often paying out within a day of receiving an application.

However, the scheme had many teething issues in the first month when more than £21 billion was provided in 699,000 separate loans.

From when the scheme was launched on May 3, until June 2, there was no way to ensure that a business did not pocket £50,000 from one bank before applying for another £50,000 from a different lender.

One estimate cited by the NAO claims that up to 2.3% of loans that were paid in the first month, a little over 16,000, were duplicates.

‘With concerns that many small businesses might run out of money as a result of the Covid-19 pandemic, Government acted decisively to get cash into their hands as quickly as possible,’ said NAO boss Gareth Davies.

‘Unfortunately, the cost to the taxpayer has the potential to be very high, if the estimated losses turn out to be correct.’

He called on ministers to make sure that it has ‘robust’ measures in place to collect debts from the businesses that owe money under the scheme, and investigate fraud.

A Government spokesperson said: ‘We’ve looked to minimise fraud – with lenders implementing a range of protections including anti-money laundering and customer checks, as well as transaction monitoring controls. Any fraudulent applications can be criminally prosecuted for which penalties include imprisonment or a fine or both.’