With just one day to go until the highly-anticipated showdown between Islam Makhachev vs Charles Oliveira, the picks are in.

The bookies have Makhachev as a narrow favourite, but interestingly the majority of their fellow UFC fighters believe the Brazilian will have his hand raised.

There are many ways this contest can go and the stylistic match-up is intriguing. Makhachev’s wrestling is the best in the division but Oliveira is perfectly happy to be taken down given the fact that he has the most submission wins in UFC history.

His recent fights have also shown incredible development in his striking game and on paper he has the advantage here too.

One interested party will be Beneil Dariush, who is not far away from a title shot and takes on Matheusz Gamrot on the same card.

He is one of the dissenting voices tipping the Russian for success, telling MMA Crazy: ‘It’s a tricky fight, it’s going to be who finds their distance. Charles is uber aggressive and all offence, he throws kicks, knees, flying stuff and even jiu-jitsu off his back. 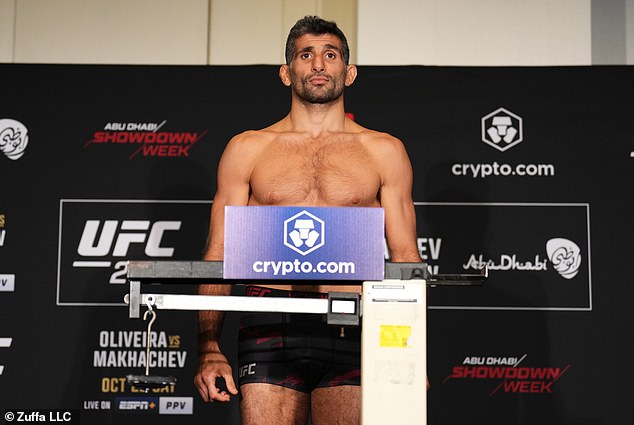 ‘Everything is all offence and Islam is very defensive, so who’s going to find their footing? I’m leaning a little bit towards Islam but not by much.’ His opponent concurred: ‘Islam doesn’t make stupid mistakes so I think he beats Oliveira. I think it will be a decision.’

And fellow lightweight Drew Dober, who was beaten by Makhachev, said: ‘Islam, I know first hand it is hard to find a mistake in his game and Oliveira with a five-round fight is some interesting variables but I’d definitely put my money on Islam.’

But Michael Chandler, who has been in there and felt Oliveira’s power first hand, is heavily favourite him. 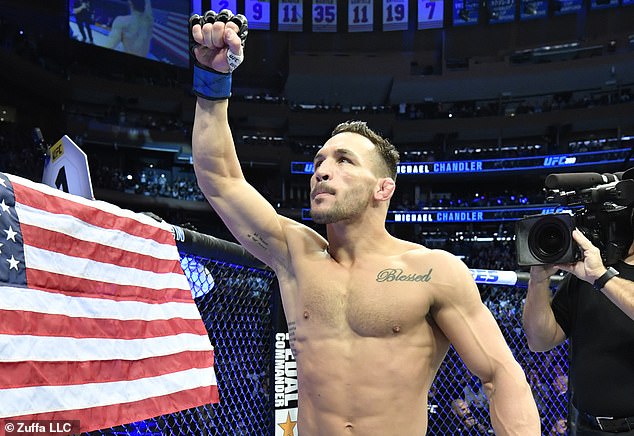 He said: ‘Charles Oliveira, I think Oliveira gets the job done, I think Islam, not that he isn’t great or highly touted or a future champion. But there’s no reason he should ever be a favourite against Charles Oliveira.

‘What he’s done over the last couple of fights, finishing everybody he’s fighting is nothing short of amazing.

‘The resurgence from journeyman to legitimate No 1 on the planet has been something to behold. I think Oliveira goes out there and finishes him.’

And a couple of British stars have had their say too, with Paddy Pimblett even picking a round.

He said: ‘I think Charles Oliveira wins and gets a finish in round three. Simple. Both are unbelievable fighters, Islam is quality but he hasn’t fought the calibre of opponent that Charles has. He hasn’t been tested like he will be against Charles. Oliveira all day.’ 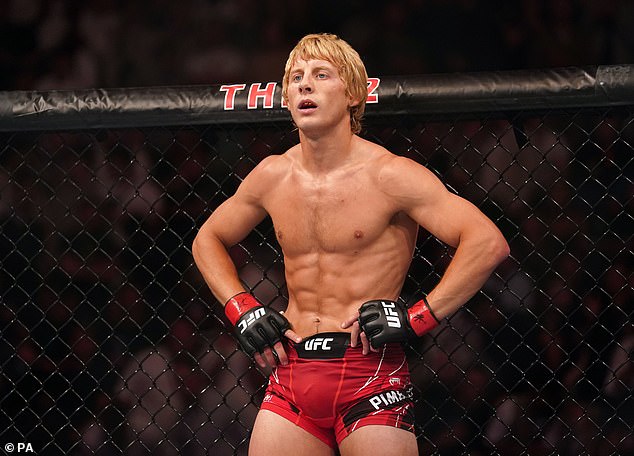 But new welterweight champion Leon Edwards sat on the fence – reflecting: ‘I’ve trained with Islam at AKA and he’s a great wrestler, very strong in what he does but I feel like Charles has this momentum now and his confidence is so high. I don’t know… I wouldn’t bet on that fight.’

Light-heavyweight star and analyst Anthony Smith is opting for Oliveira having bet against him for the last three impressive wins.

He told MMA Pros Pick: ‘Another fight where I need to do a better job of listening to the masses a little less. I picked against Oliveira against Gaethje and Poirier and Chandler.

‘Every time he makes a liar out of me. I think I weigh too much how hittable he is, that’s the thing that bothers me but I’m done with that. I’m going with Oliveira.

‘His striking has come on, Gaethje was sunk with one shot really. His grappling is dangerous enough for there to be more striking than Islam wants to have.’

And UFC heavyweight contender Cyril Gane agreed: ‘Oliveira has proved he is really confident and can finish this kind of guy. 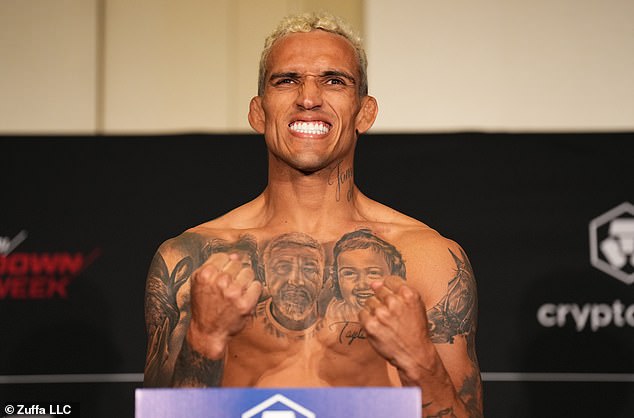 ‘He has some kind of statistic where he never finished a wrestler so maybe an opportunity for him. But I think Oliveira.’

Mike Davis, another UFC lightweight, is backing the underdog too: ‘Islam is huge, he’s a big guy.

‘I’m a fan of Oliveira and how he never gave up, it’s a learning game and he figured out what he had to do. I think Charles has better grappling but Makhachev has the wrestling.

‘When I wrestler takes me down I will always submit him. They can hold you in spaces but the minute you get an inch, you can submit, I think that will happen.’

While Corey Sandhagen and Dominic Cruz both had interesting takes.

Sandhagen picked out Oliveira’s decision making as what he thinks will be the deciding factor. 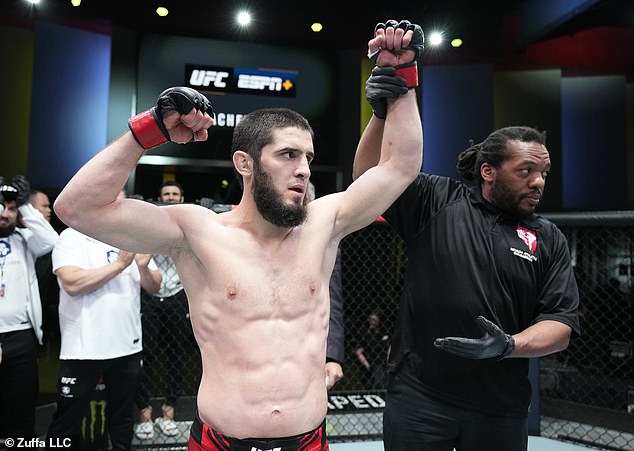 ‘His game is super thought out, he’s been in the UFC a lot of years and I think he’ll probably win. Islam is really good too but Oliveira’s decision making is a lot for people, especially if – like Makhachev – they want to take you down and slowly grind.’

And Cruz argued: ‘I think Oliveira has a really good chance to finish the fight. In the first three rounds, I think he can finish it but if it goes the distance then Makhachev wins it. If it goes five rounds and Makhachev can avoid the decisions, stay on top and blanket Oliveira.

‘The thing making Oliveira dangerous right now is since he’s moved up, he’s put a huge frame on. He’s got the perfect style because he doesn’t care about takedowns so he can commit 100 percent.’

But Makhachev has some big name backers, notably two from Australia.

Robert Whittaker and Alexander Volkanovski are siding narrowly with the Dagestani. 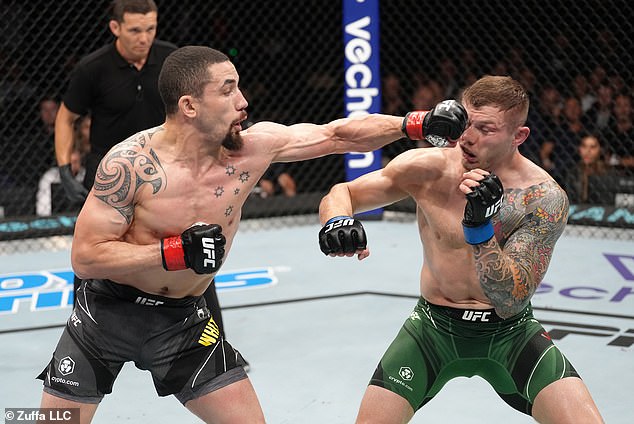 Whittaker said: ‘If I was a betting man, Makhachev. Oliveira can be taken down because he has such faith in his jiu-jitsu, especially defensive jiu-jitsu, playing off his back. And he’s so good at straight line attacks.

‘His knees and his elbows and strikes stop people from getting in. Makhachev’s wrestling is obviously top tier. If I had to make a bet it would be on Makhachev.’

And speaking on his YouTube channel, Volkanovski added: ‘If I had to lean towards someone it would be Islam. Stylistically it is just how I see it going with Makhachev’s wrestling control. Either a late finish, kimura, arm-bar, arm-triangle or a decision.’

The division between fighters and the bookies and many different takes on how Saturday night will play out shows what a high quality match-up this is.

All that’s left now is for the protagonists to deliver on the big stage.