A two-year-old boy died after accidentally hanging himself from a cord for a window blind, an inquest has heard.

Cobie Grimshaw, who was described as a normal ‘boisterous boy’, became entangled on the beaded cord while playing on the sofa at home in Looe, Cornwall.

His mother Lauren, 26, had stepped out of the room to make a cup of tea before finding the toddler just minutes later.

Cobie suffered an irreversible brain injury following a lack of oxygen and, despite desperate attempts to save him, died three days later on April 7.

Cobie Grimshaw (pictured), who was described as a normal ‘boisterous boy’, became entangled on the beaded cord while playing on the sofa at home in Looe, Cornwall

The inquest, held remotely in Truro, heard how Lauren, who lived with her partner Tom, had been playing with Cobie on the morning on his death.

In a statement, Lauren said: ‘I went into the lounge and could see Cobie stood upright on the sofa near the centre window, I can’t remember whether he was stood on the cushion or the back or the sofa, or if his feet were lifted.

‘I remember thinking he looked asleep, as I got closer I could see the blind cord was around his neck.

‘I immediately took him out of the cord by lifting him then taking it from his neck while shouting for mum and Tom.

‘Mum took Cobie from me. I was shouting for help. Mum laid him on the sofa and started doing CPR while I called 999 for an ambulance.’

A neighbour came to give CPR before Cobie was flown to hospital by air ambulance.

But he could not be saved.

A coroner ruled that he died after he ‘accidentally entrapped and strangled himself.’ 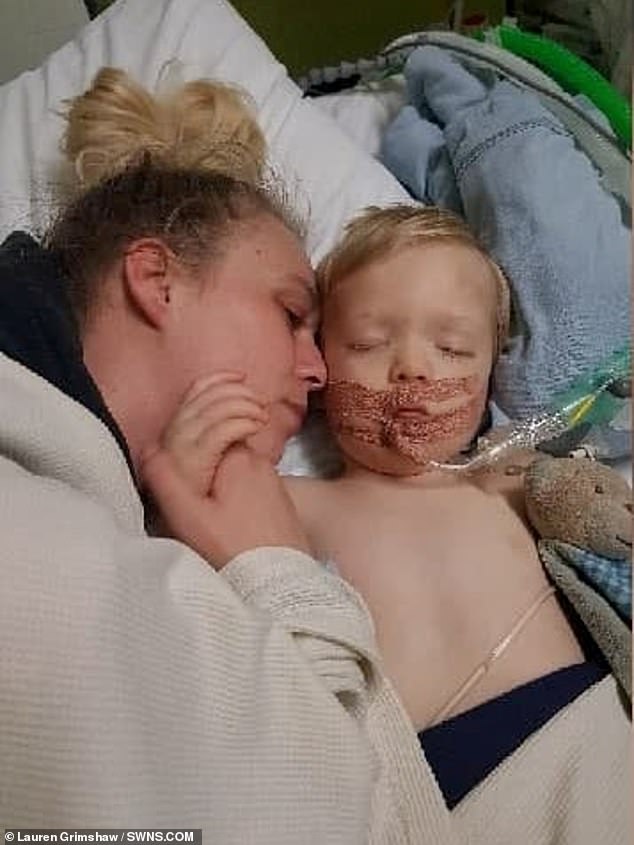 Cobie (pictured in hospital) suffered an irreversible brain injury following a lack of oxygen and, despite desperate attempts to save him, died three days later on April 7

In her statement read out at the inquest by senior coroner Andrew Cox, Lauren added: ‘He was a bright, clever littler boy who was full of energy.

‘That morning, Cobie woke Tom and I as he usually does by running from his bedroom to the door and shouting at his stair gate, “morning momma”.

‘It was around 7am. I got up and took Cobie downstairs. I changed Cobie’s nappy and he had breakfast, and we sat cuddled up on the sofa watching his favourite program.

‘Then we were playing for a bit, then he was laying by himself while I was doing chores.’

The inquest heard how later in the morning Lauren’s mother, Terri, arrived at the house with a gift for Cobie.

She added: ‘We just finished lunch at about 12.30 when my mum turned up with an art set for Cobie. 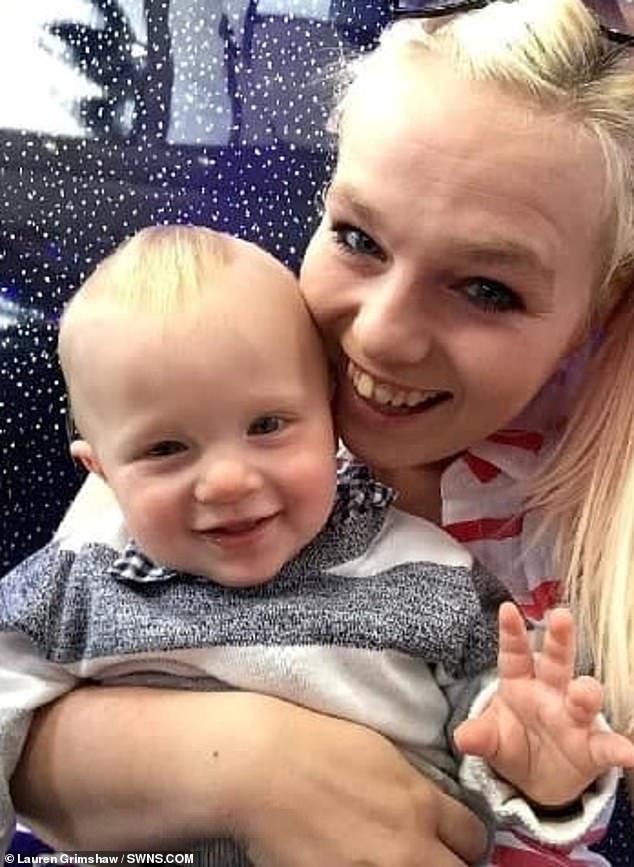 Cobie’s mother Lauren, 26, (pictured together) had stepped out of the room to make a cup of tea before finding the toddler just minutes later 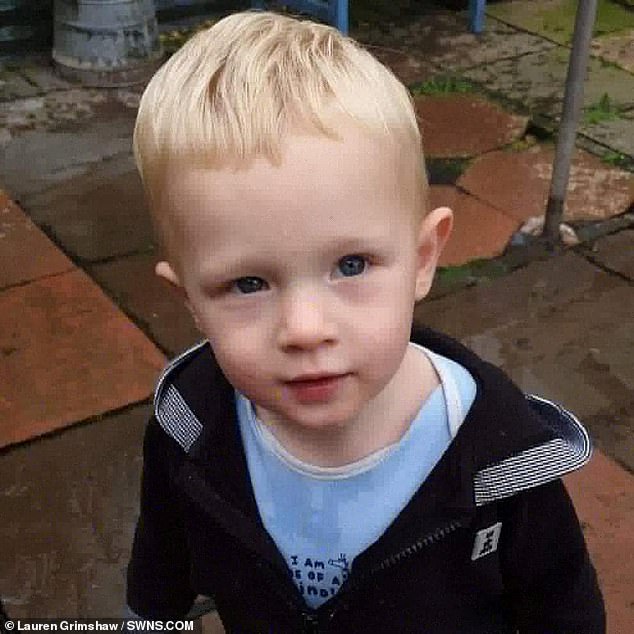 ‘When she arrived we were in the lounge and as you walk in there are three clear glass windows.

‘I have an “L” shaped sofa, the back of which fits under the window sill. When sat on the sofa, you face the lounge. Cobie and I were sat on the sofa.

‘When Cobie spotted my mum, he was excited to see her. Cobie gave mum a massive cuddle.’

When Terri had entered the house, Lauren went to go make a round of hot drinks for the family and left Cobie with his grandmother in the lounge.

She added: ‘I was at the opposite end of the kitchen starting to make drinks

‘I hadn’t heard or seen him get down from mum’s cuddle, but I turned and saw he wasn’t with mum and noticed he was quiet. I thought he was in the lounge.

‘I finished making drinks and he had only been gone for the time it took the kettle to boil.’

Lauren went into the street and began shouting for help while waiting for the paramedics to arrive – rousing her neighbour, Steven Humphries.

Steven is a former St John’s Ambulance volunteer and took over first aid for Cobie, asking Tom to escort Lauren out the room as she had by this point become hysterical.

He said: ‘Everything was very quick, I started to give CPR. I’m an ex St Johns ambulance volunteer so I knew what I was doing.

‘We must have kept this going for 15 to 20 minutes. Lauren’s mother said he hung himself on a cord on a window blind.

‘I asked how long he had been unresponsive, she said about five to ten minutes. I thought that had been a very long time.

‘We continued giving first aid but there was no response from the boy.’

A short while later an air ambulance arrived and took Cobie, with his mother, to Derriford Hospital in Plymouth, Devon, for treatment.

He was later moved to a specialist hospital in Bristol.

Lauren’s statement added: ‘We went in an air ambulance with Cobie to Derriford.

‘Cobie was taken for a CT scan, the next thing I remember is being in the car with my dad and Cobie’s dad, Curtis.

‘I was told Cobie was transferred to Bristol for the treatment he needed.

‘On April 6 I heard they were taking Cobie for an emergency CT scan and they were worried Cobie would not make it to the scan.

‘I was aware that he had been having lots of mini heart attacks.

‘About an hour after a doctor came to speak to me and I was told his brain was swollen and he was not likely to make it. He was kept on a ventilator until April 7 when he passed away.

‘I am devastated by Cobie’s death and miss him every day. I just want things to be as they were’

A statement from Dr Elvin Schadenberg, from Bristol Royal Hospital for Children, was read out during the inquest.

It explained how young Cobie died after he was found hanging from a blind cord after getting away from his mother.

DC Sharon Reid, from Devon and Cornwall Police said there was no evidence of third party involvement and there were no suspicions that this was anything other than a tragic incident.

Speaking during the hearing, she said: ‘Having reviewed the information I believe this to be a truly tragic incident where Cobie has become entangled with the cord and could not free himself.’

But she added that the cord, which was beaded, was hanging loosely by the window and was not fixed by a tensioner to the wall.

Recording the cause of death as global brain injury due to asphyxiation from hanging from a blind cord, coroner Andrew Cox said: ‘I’m afraid to say that for such a devastating incident the facts are remarkably straight forward and clear.

‘Cobie was a normal fit and healthy two-year-old boy. Into everything, clearly accustomed to climbing onto the sofa and using it as a trampoline.

‘On this morning, he’d been doing what two-year-old boys do, but tragically while climbing onto the back of the sofa he’d become entangled in the cords which were not fixed to the wall and he’s become accidentally entrapped and strangled himself.

‘That has lead to a lack of oxygen getting to his brain and that’s lead directly to his death.

‘He was a two-year-old boy who lived with his mother, he became entangled in a blind.

‘He was taken to hospital but found to have suffered a significant brain injury. He deteriorated and died in Hospital.

‘I record the conclusion of accidental death. This is a truly tragic set of circumstances.

‘Al I can do is offer my condolences to the family of Cobie, I am desperately sorry that we have met in these circumstances.’

Speaking after the hearing, Lauren said: ‘I would like to add that he was a happy loving little boy and was loved by all.

‘He was the big boss at Southwest Inflatable Theme Parks and everyone answered to him.

‘He was just starting nursery where he was making lots of friends. He was my only child and brightened my day very day.’