More than two thirds of coronavirus survivors who were hospitalized for the infection are still left with lingering symptoms seven weeks later, new research suggests.

Reports of so-called ‘long covid’ have spread across the world, suggesting that even if vaccines can slow the spread of the pandemic, millions may be living with lasting effects of the infection.

Researchers at University College London found that 69 percent of COVID-19 survivors who had been hospitalized still felt unusually fatigued 54 days after they were discharged and had cleared the virus.

Many also felt short of breath, continued to cough or still showed signs of lung issues on X-rays.

It’s evidence, say the the study authors, that ‘long COVID’ is a very real phenomenon that may burden people and the healthcare system for months if not years to come as the virus continues to spread.

Two thirds of coronavirus survivors who were hospitalized and discharged report they are still fatigued, short of breath or coughing 54 days after being released, a new study finds (file)

Overall, survival rates are high, but a growing share of those who overcome the infection still feel off, or unwell, long after they are negative for the virus and well enough to leave hospitals.

For the new study, the researchers tracked 384 patients who were discharged after being admitted to hospitals for treatment of coronavirus.

On average, the patients were at the hospital for six-and-a-half days, but 14.5 percent had to move to intensive care units.

Most of the patients were also given chest X-rays upon admission to the hospital.

Some (15 percent) didn’t show any signs of the infection progressing to visibly harm their lungs. 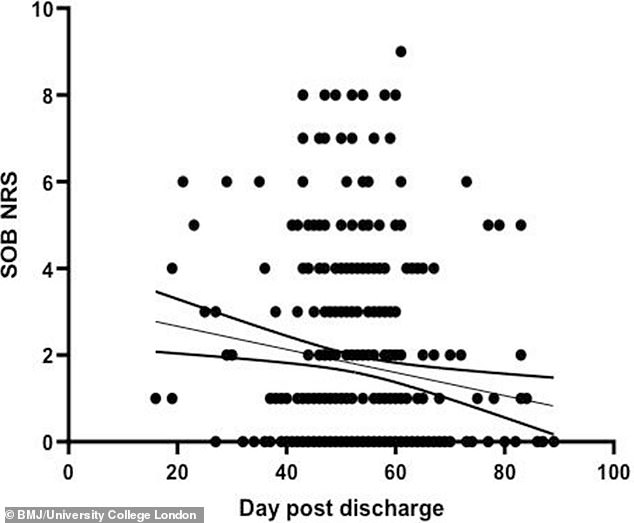 Most patients (53 percent) still felt short of breath 54 days after getting discharged, and some continued to feel breathless for nearly three months, as a graph from the new study, in which each dot represents an individual patient, shows

But more than half (56) percent had X-rays that were ‘typical’ of a COVID-19 patient – showing clouding and inflammation in the tissue.

Of those, 30 percent showed signs of severe infection.

By the time they were discharged, 62 percent of patients X-rays that appeared in the normal range.

But the lungs of nine percent of the patients actually looked worse later on, as well as weeks after they were discharged from hospitals.

In total, 69 percent of patients were still fatigued nearly two months after they were discharged. 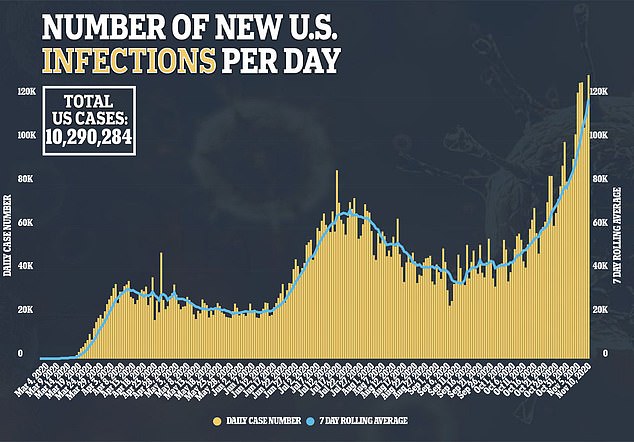 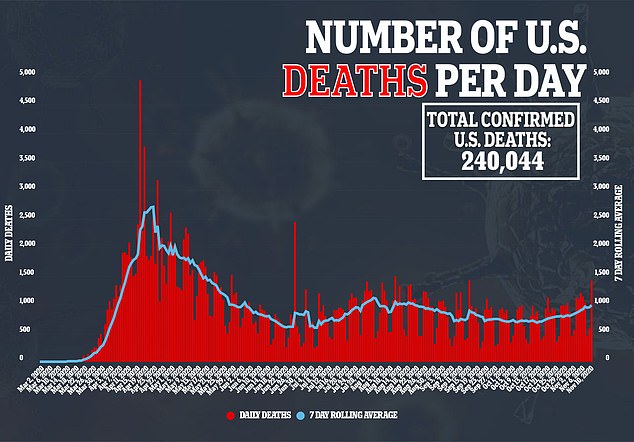 Thirty-four percent had a ‘persistent’ cough and 15 percent said they were depressed.

Separate research has suggested that one in five COVID-19 survivors is diagnosed with a psychiatric disorder within 90 days of discharge from hospitals.

Among the patients whose lung X-rays showed their lungs were actually in poorer shape than when they’d been discharged, up to 30 percent had higher than normal concentrations of certain proteins in their blood work.

The researchers didn’t assess the risk of blood clots among their study participants, but COVID-19 itself as well as the levels of the proteins seen in the patients are each risk factors for the life-threatening issue.

‘Patients whose COVID-19 illness is serious enough for them to require hospital care often continue to suffer significant symptoms for many weeks after their discharge,’ said Dr Swapna Mandal, a UCL professor and co-lead author of the study.

‘Understanding ‘long COVID’ is critical in helping people who have been through this life-changing experience return to health, while rapid roll-out of this follow-up service shows how our clinical teams worked together to deliver an innovative service during a period of unprecedented demand on our staff,’ said co-lead study author Dr John Hurst.