Two postmen died while working during the August heatwave, sparking an investigation by Royal Mail and union chiefs, as hundreds of workers held a minute’s silence in memory of their colleagues.

Mark Cremer, 55, and 59-year-old Phil Bentham are understood to have died on their routes in mid-August, as temperatures in the UK soared beyond 34 degrees.

Mr Cremer, who was based at the Lancing Delivery Office in West Sussex and had worked for Royal Mail for almost 20 years, collapsed and died on August 13, on an ‘undulated’ round with a ‘reasonably high’ gradient.

The postman, who had known underlying health conditions, was found slumped at the end of a pathway by a resident who called for an ambulance, but he died shortly after.

A medical report into his death showed he died of natural causes, while the coroner today confirmed his death will not be the subject of an inquest.

Meanwhile, Mr Bentham, a step-father-of-four from Barrow-on-Furness in Cumbria, died at the end of his round on August 12. According to union chiefs, he had recently returned to work after 17 weeks of shielding from Covid-19.

A coroner also confirmed his death was as the result of natural causes and will not be the subject of an inquest.

But after mounting pressure from bosses at the Communication Workers Union (CWU), Royal Mail have agreed to a joint internal investigation to determine whether or not there were any deficiencies in the Royal Mail Severe Weather Risk Assessment process.

The union say that although they are ‘not in a position to comment further’ on their deaths.

However, in a letter to colleagues, CWU chiefs say that ‘despite representations’ there had been ‘little or no bottled water provision for staff on delivery in many units, even though water fountains had been switched off’ as a Covid-19 precaution.

Meanwhile Royal Mail said it was ‘deeply saddened’ to learn of the deaths of the two colleagues – adding it was ‘waiting for the results of our own internal investigations and any medical findings before commenting further in order to avoid unhelpful speculation’.

A spokesperson also said that drinking water is available to staff ‘as required’.

It comes as postal workers gathered at Royal Mail’s Southend depot in Essex to pay their respects during a minute’s silence in memory of their two colleagues.

Postman Luke Elgar shared a picture of his colleagues observing a minute’s silence to pay their respects and urged Royal Mail to take action and protect staff working in extreme weather.

The 28-year-old said: ‘We were really gutted. They’re not particularly old guys, it could be anyone in our office. It’s worrying and concerning for the families involved.

‘You could see it happening because we’re trudging around during long hours in that heat, which we’d never experienced [before], for quite long periods.

‘We hadn’t heard anything from Royal Mail. We found out about [the deaths] from Facebook pages and group chats online.

‘The main thing for us is because of COVID a lot of the water machines were unavailable so we couldn’t fill up water bottles to take with us, and there isn’t always a place where you can get to water on a round. 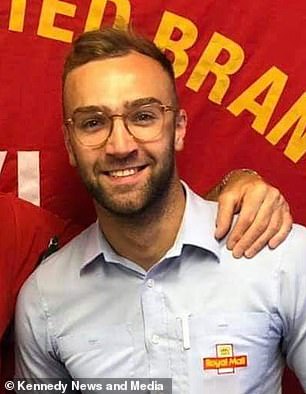 ‘Union reps in local offices have been buying bottled water for staff out of their own pocket in some cases.

‘They need to listen to the posties about their concerns and acknowledge there needs to be less pressure to get as much work done in a day than there would be under normal circumstances.

‘They need to understand that what normally is possible isn’t in those circumstances. In the heat you need to slow down a bit.’

On the minute silence, he said: ‘We wanted to observe a minute’s silence for them and it was an opportunity to speak to the guys on the floor to say ‘take care of yourself, this could happen to any one of us’.

‘It was my idea to do the silence. I addressed the guys for a minute and we took the silence then went back to our work. We decided at our depot to show our respects.

On social media, Royal Mail employees and members of the public expressed their condolences and shared their own concerns.

David McGarvey commented: ‘It’s hard work in that heat. I thought I was going to collapse myself last week.’

Roy Worden wrote: ‘I went out the other day during the hottest part of the day, I couldn’t touch the steering wheel it was so hot.

‘Before getting into my car I stopped to ask my postie if he was ok.

‘He was carrying a heavy bag and sweating [profusely] and clearly struggling. I asked him if he would like a drink. 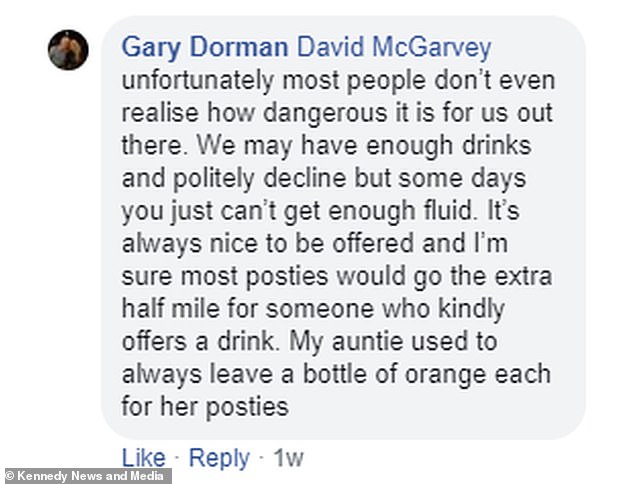 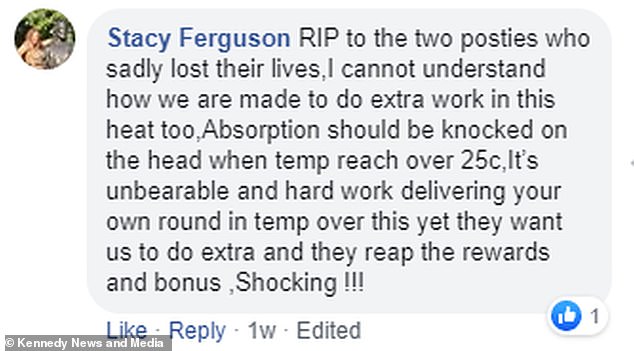 ‘It’s not on, [he] shouldn’t be carrying heavy weights in that heat.’

In response to the news of the deaths, the CWU sent a letter to Royal Mail demanding an investigation.

Dave Joyce, CWU national health and safety officer, said: ‘Our Royal Mail members provide the best postal service in the world and after the government declared that postal workers were ‘essential workers’ at the beginning of the coronavirus outbreak, postmen and women have worked tirelessly through the six-months of the pandemic without the luxury of being furloughed.

‘The loss of the two postmen is a huge blow to postal workers across the country.

‘CWU HQ has expressed our condolences and deepest sympathies to the families, friends and work colleagues of our two members who died in sad circumstances and we fully understand the grief and anxiety amongst Phil and Mark’s work colleagues in their respective Delivery Offices where emotions are naturally running high.

‘Staff shortages, one-person per van, a 50 per cent increase in parcels and the recent record-breaking heatwave obviously piled the pressure on postmen and women, made worse by the fact that water fountains had been shut off due to the risk of virus transmission.

‘All in all working conditions have been tough on the workforce.

On the deaths of the two postmen, he said: ‘We are not in a position to comment further until such time as investigations have been completed by the appropriate medical and, if necessary, the judicial authorities and their respective conclusions published.

‘However Royal Mail and the CWU have agreed to joint internal investigations which will look at any possible contributory factors.

‘Royal Mail have also now agreed to our request for the provision of water bottles for all outdoor workers and a campaign on the importance of staying hydrated at all times which are welcomed.

‘This is an important health and safety issue when carrying out a manual job, walking many miles, outdoors in excessively hot weather conditions when temperatures are in the mid-90s as they were recently.

‘We’ll be looking to ensure that in future Severe Weather Risk Assessments are carried out in heatwave weather to avoid dehydration, heat exhaustion and sun stroke and so protect the outdoor delivery workforce.’

A Royal Mail spokesperson said: ‘We were deeply saddened to learn of the deaths of both our colleagues who will be greatly missed.

‘We are waiting for the results of our own internal investigations and any medical findings before commenting further in order to avoid unhelpful speculation.

‘The health and safety of our people is our number one priority at Royal Mail.

‘We have robust processes in place to safeguard our people’s safety, health and wellbeing, especially during extreme weather, both hot and cold.

‘We provide clear guidance aimed at protecting our people’s safety, health and wellbeing as they carry out their work. We also ensure access to drinking water as required.

‘Our thoughts and condolences continue to be with their family, friends and colleagues at this very sad time.’