Two ‘cereal box-sized’ satellites set to be launched from Cornwall this summer could provide Britain with its own spying capability from space.

The UK currently relies on imagery from RAF aircraft, as well as the US Department of Defence sharing its data, to monitor things like Russian troop movements on the battlefields of Ukraine.

But officials want to create a constellation of small intelligence, surveillance and reconnaissance (ISR) satellites, so that the country is not so dependent on other nations.

The mini cube-shaped satellites (‘cubesats’) will be blasted into space on a Virgin Orbit rocket called LauncherOne, which itself will be unleashed from a jumbo jet from Spaceport Cornwall, part of Newquay Airport.

Surveillance: Two ‘cereal box-sized’ satellites set to be launched from Cornwall this summer could allow Britain to have its own spying capability from space. The ‘cubesats’ are depicted 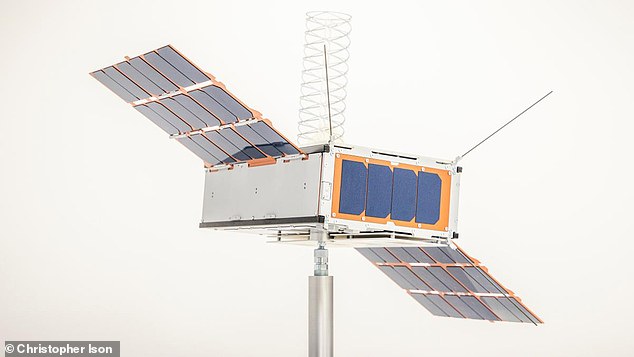 The mini cube-shaped satellites (‘cubesats’) will be blasted into space on a Virgin Orbit rocket called LauncherOne, which itself will be unleashed from a jumbo jet from Spaceport Cornwall, part of Newquay Airport

Once deployed, the cubesats will deliver high-tech imaging sensors, allowing the Ministry of Defence (MoD) to monitor Earth and its oceans.

They will also be able to monitor radio signals, a capability that has been vital in intercepting conversations between Russian commanders and junior ranks.

The satellites, which are part of the MoD’s so-called ‘Prometheus-2’ mission, are prototypes and will carry out an initial testing exercise to see what is possible for Britain in the future.

Weighing 20 pounds and measuring about 12 inches long, 8 inches wide and 4 inches deep, they will operate in low Earth Orbit, around 340 miles above the Earth and 30-60 miles apart at 17,000mph.

‘Cubesat 1’ and ‘Cubesat 2’ will provide a test platform for monitoring radio signals including GPS and sophisticated imaging.

Cubesat 1 includes a laser detector, a GPS receiver and a hyperspectral imager – which can capture multiple slivers of pictures over different wavelengths of light.

One camera will be fitted with a wide-angle lens for a 180-degree view of Earth’s surface, with the second camera observing the other Cubesat 1 to support space situational awareness and monitor other objects orbiting the Earth.

Built by In-Space Missions Ltd, based in Hampshire, and designed with Airbus Defence and Space, Prometheus-2 is a collaboration between the MoD and international partners, including the US National Reconnaissance Office (NRO). 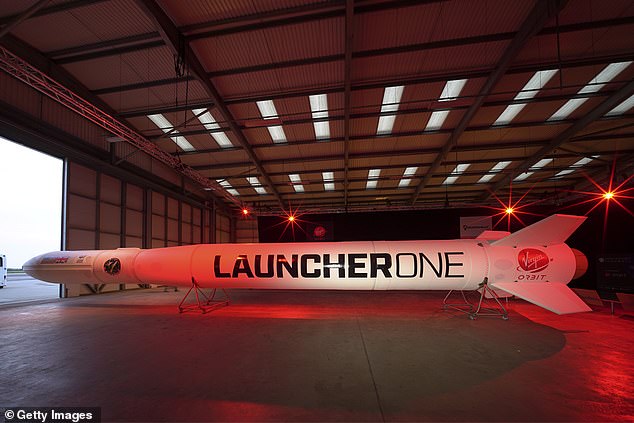 The Virgin Orbit Launcher One rocket, pictured in its hanger at Newquay Airport in August last year, will be equipped with Ministry of Defence observation kit, among other payloads

‘The launch of Prometheus-2 represents another important step forward for our homegrown space programme.

‘This collaboration with In-Space Missions and Airbus paves the way for the UK to become a more resilient, more robust and more significant global space entity.’

The satellites, which are set to launch at an estimated cost of $300,000 (£246,000), will be just one of the payloads aboard LauncherOne when it blasts off from Spaceport Cornwall some time this summer.

If successful, it will earn the title of the first satellite launch from British soil.

Once Cosmic Girl is at a high enough altitude – around 35,000 feet – LauncherOne is unleashed.

When at an orbital altitude, LauncherOne deploys the satellites, which will be catapulted into orbit at 8,000 miles per hour.

Virgin Orbit has already conducted three successful consecutive orbital missions with LauncherOne in 2021 and 2022, the last one in January.

However, all three took place from Mojave Air and Space Port, California, so the first one from UK soil is generating considerable interest.

Over the last 16 months since January 2021, LauncherOne has already deployed payloads in space for Virgin Orbit’s customers, including NASA and the US Department of Defense.