Two men have been arrested and a 17-year-old has been injured in a motorbike crash after 150 people flouted coronavirus social distancing rules to attend a funeral.

Kent Police allowed the funeral to go ahead in Sittingbourne, Kent, claiming they received ‘very little notice’ despite being told the night before.

Many motorcyclists attended the funeral at the Garden of England Crematorium and some drove along the pavement in a procession.

Two men, aged 24 and 32, were arrested on suspicion of dangerous driving and driving without a licence. The 17-year-old was airlifted to a London hospital with ‘serious injuries’.

Government guidelines clearly state that while funerals are allowed to go ahead, only immediate family should attend. Several councils in the UK have said a maximum of ten mourners are allowed.

A funeral in Sittingbourne, Kent, was allowed to go ahead by police. A 17-year-old boy was airlifted to hospital after he was hit by a motorbike 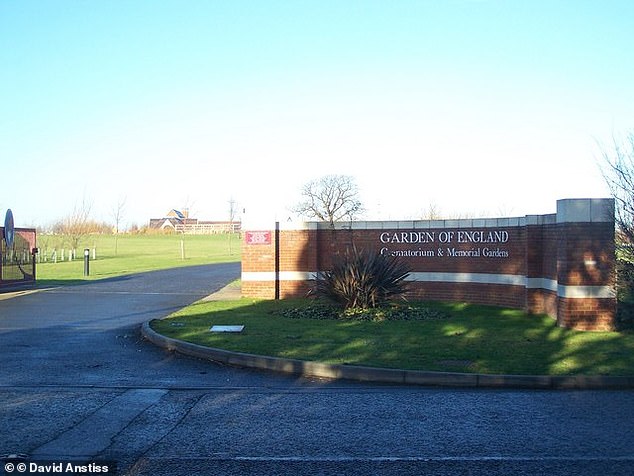 A procession of motorbikes headed to the Garden of England crematorium for the 150-strong funeral, which flouted social distancing rules

Kent police said it was not afforded enough time to speak to those involved and remind them of social distancing rules before the funeral took place.

Chief Inspector Neil Loudon said: ‘Kent Police was afforded very little notice about this large gathering and as such a decision was made to allow the funeral to go ahead during what was no doubt a difficult time for those who had lost a loved one.

‘Officers’ priority was to maintain a presence while offering protection to the wider community around any health concerns they may have had.’

He said officers will be in touch with those who were not following rules and they will be ‘reminded of their personal responsibilities during these unprecedented times’. 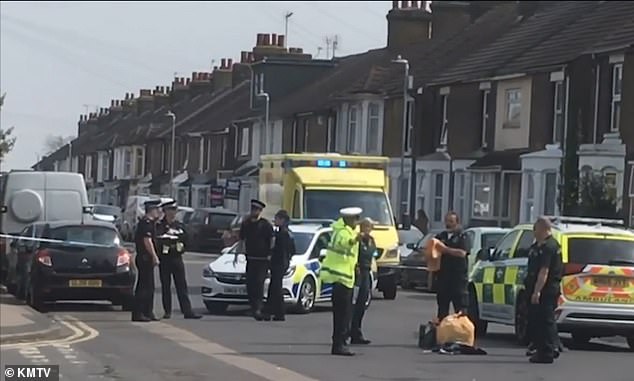 Police pictured at the scene of the collision on Thursday. Two men have been arrested

He added that there would be an increased police presence in the area over the coming days.

‘The force received notification of the funeral the evening before it was due to take place, and was therefore unable to speak with those attending to encourage them to adhere to social distancing measures,’ a spokesman said.

‘Officers maintained a presence during the event in an effort to strike a balance between allowing those in attendance to grieve and celebrate the life they knew, while protecting the wider local community from any potential health offences.’

The funeral took place around 10am on Thursday.