Two people have died in Canada following the ‘immense’ devastation caused by powerful storm Fiona – which swept houses into the sea and caused major power outages for hundreds of thousands of residents.

Officials found the body of a 73-year-old woman who was killed after her home in Newfoundland was destroyed, while another person died on Prince Edward Island, where generator issues may have played a role.

The woman in Newfoundland is thought to have been sheltering in her basement when waves as high as 40 feet broke through her home and swept her out to sea.

The storm – which was previously classed as a hurricane – packed intense winds of 80 miles per hour when it arrived with force rarely seen in eastern Canada, bringing torrential rain and waves of up to 40 feet.

‘The devastation is immense,’ Nova Scotia Premier Tim Houston said. ‘The magnitude of the storm is incredible.’

More than 300,000 people were still without electricity across five provinces Sunday after the storm felled trees, ripped roofs from buildings and damaged power lines, officials said. Hundreds of utility crews were working to restore power. 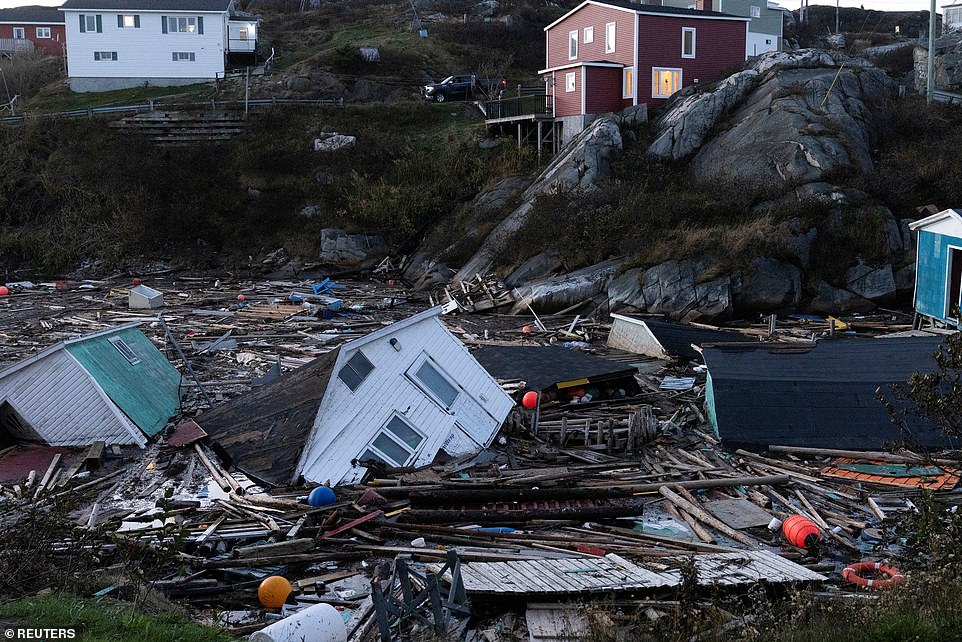 Houses were swept into the water by strong winds and catastrophic 40 foot waves, including at least 20 homes swept away in Channel-Port aux Basques, Newfoundland 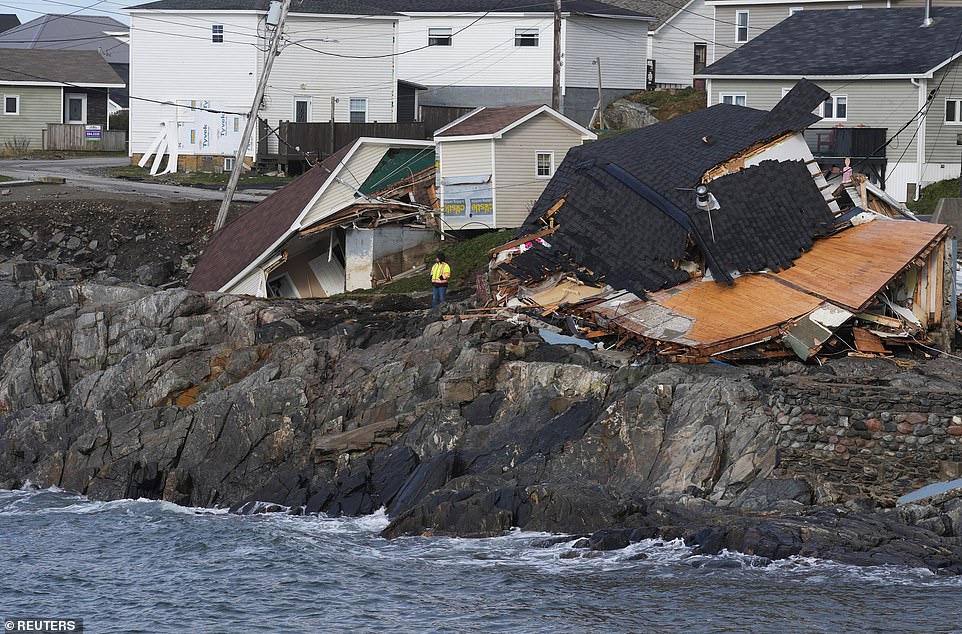 A person looks towards the sea after the arrival of Hurricane Fiona in Channel-Port Aux Basques, where Mayor Brian Button called the damage ‘a total war zone’ 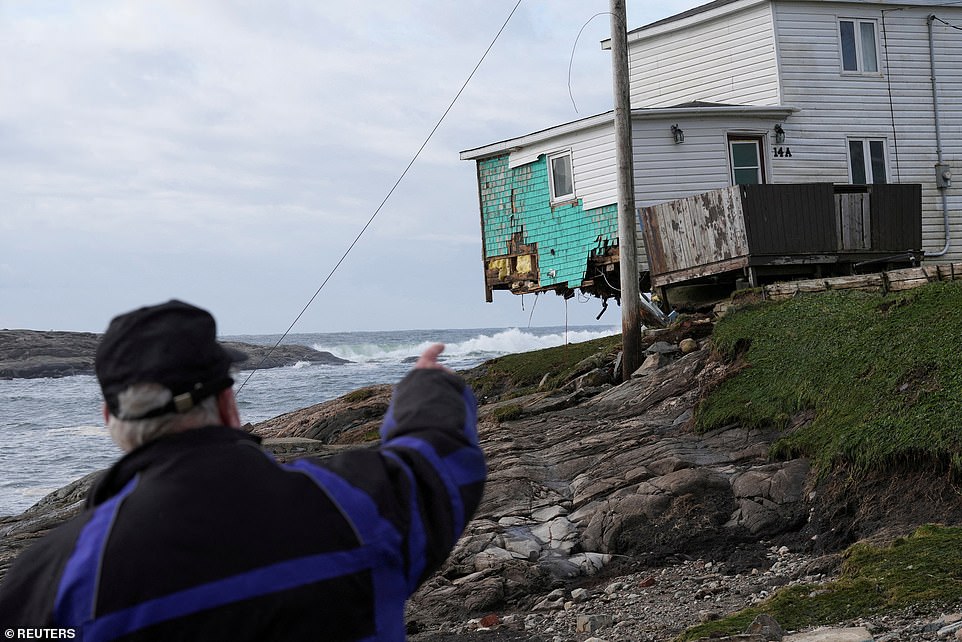 Storm surges swept at least 20 homes into the sea in the town of Channel-Port aux Basques, on the southwestern tip of Newfoundland.

Mayor Brian Button described ‘a total war zone’ in the coastal community as residents reckoned with the damage, though 200 residents were evacuated before the storm hit.

‘Some people have lost everything, and I mean everything,’ Button told CBC News.

‘The sea was taking back the land and we were getting separated. A lot of our homes are built along the coastline along the Atlantic Ocean. Down there, Fiona just wiped out parts of that,’ he said.

Tempers were fraying Sunday as residents tried to return to their homes – or what was left of them.

‘I know people are showing up at the barricades angry this morning and wanting to move in and go check up on their properties,’ said Button in a live video on Facebook.

‘The weather may have cleared, but the situation has not cleared at all. You’ve got to give us a little bit of time… Unfortunately, this is going to take days, could take weeks, could take months in some cases,’ he said.

‘I’m seeing homes in the ocean. I’m seeing rubble floating all over the place. It’s complete and utter destruction. There’s an apartment that is gone, that is literally just rubble,’ said René J. Roy, a resident of Channel-Port Aux Basques and chief editor at Wreckhouse Press, said in a phone interview.

Roy estimated between eight to 20 houses and buildings have washed into the sea. ‘It’s quite terrifying,’ he said.

This is the third province to request federal military assistance, after Nova Scotia on Saturday and Prince Edward Island earlier Sunday.

‘The initial assessments say that, overall, our road infrastructure may have fared out a little bit better than we initially thought, but there are considerable pockets of severe damage all across Prince Edward Island,’ said P.E.I. Premier Dennis King.

‘The magnitude and the severity of the damage is beyond anything that we’ve seen in our province’s history,’ added King. 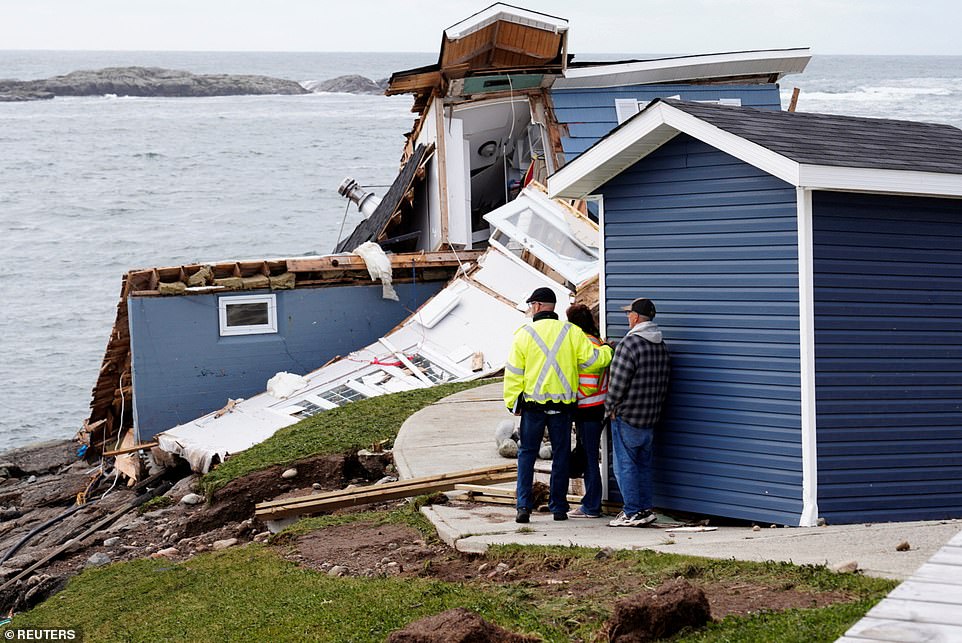 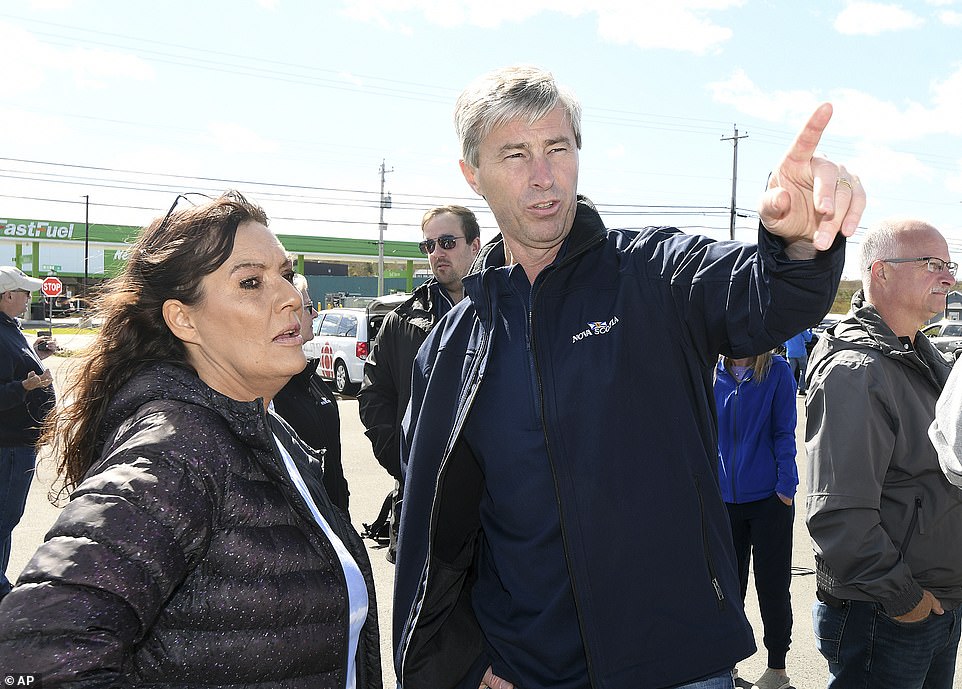 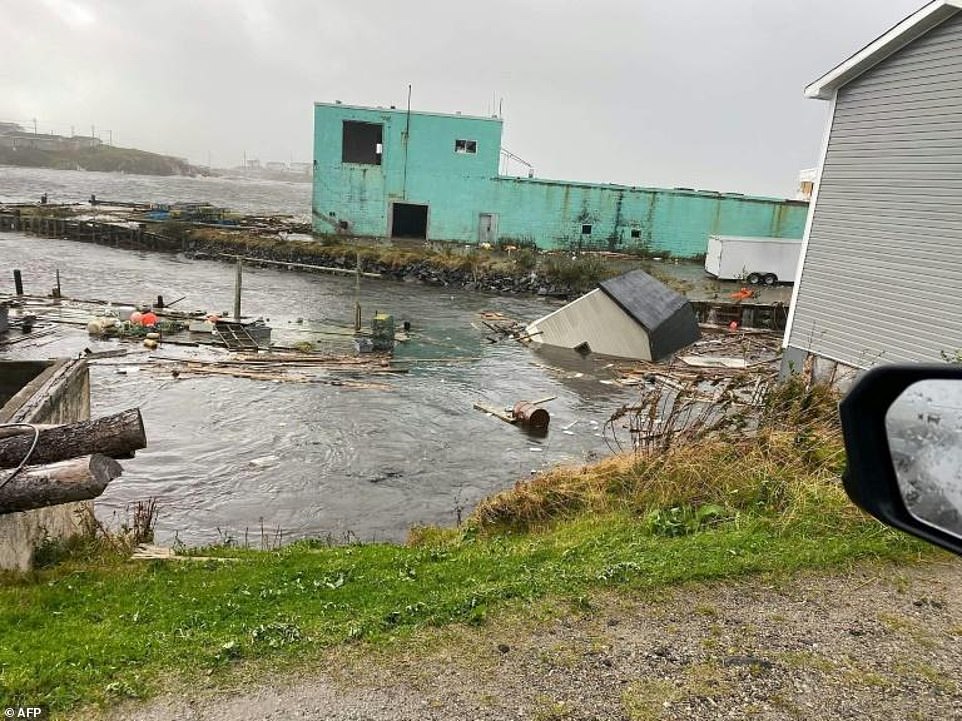 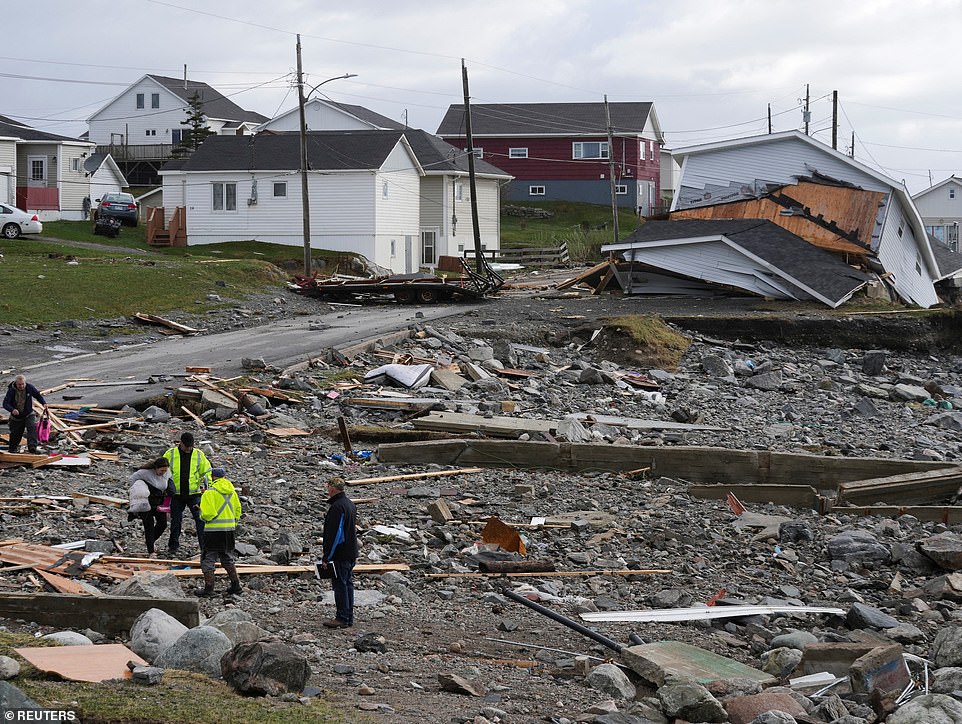 Town officials speak with a lady, whose house was destroyed, in the aftermath of Hurricane Fiona in Port Aux Basques

Television images showed a long line of cars and people on foot queuing to get gas for generators in Cape Breton, an island off Nova Scotia, where dozens had spent the night in relief centers operated by the Canadian Red Cross.

‘We ask people to stay home unless absolutely necessary,’ he told CBC, adding that there’s ‘a lot of devastation’ and hardly an area of the city that had not been significantly affected.

Prime Minister Justin Trudeau said on Twitter that he had met again with his Incident Response Group to ensure that ‘resources are available to help those affected by the storm.’

The Canadian Hurricane Center called the storm ‘the lowest pressured land falling storm on record in Canada.’ Lower pressure systems cause more intense storms, providing lift and moisture in the atmosphere to fuel showers and thunderstorms.

The 931.6 mb measurement would be not only a Canadian record but the lowest pressure ever observed in either Canada or the US for any storm north of the Gulf Coast, according to Yale Climate Connections.

The pressure is similar to what is usually expected with a Category 4 hurricane but it’s only a tropical storm because of the wide differential in pressure across the storm.

Hurricanes in Canada are somewhat rare, in part because once the storms reach colder waters, they lose their main source of energy. But post-tropical cyclones still can have hurricane-strength winds, although they have a cold core and no visible eye. They also often lose their symmetric form and more resemble a comma. 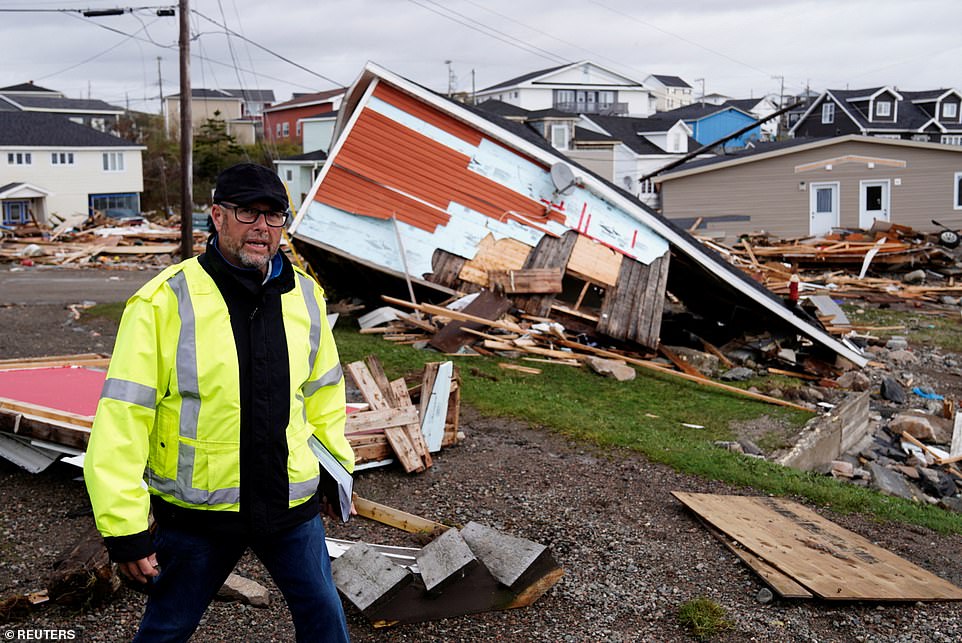 Port Aux Basques Mayor Brian Button, who called his town a ‘total war zone,’ walks through the town examining damage after the arrival of Hurricane Fiona 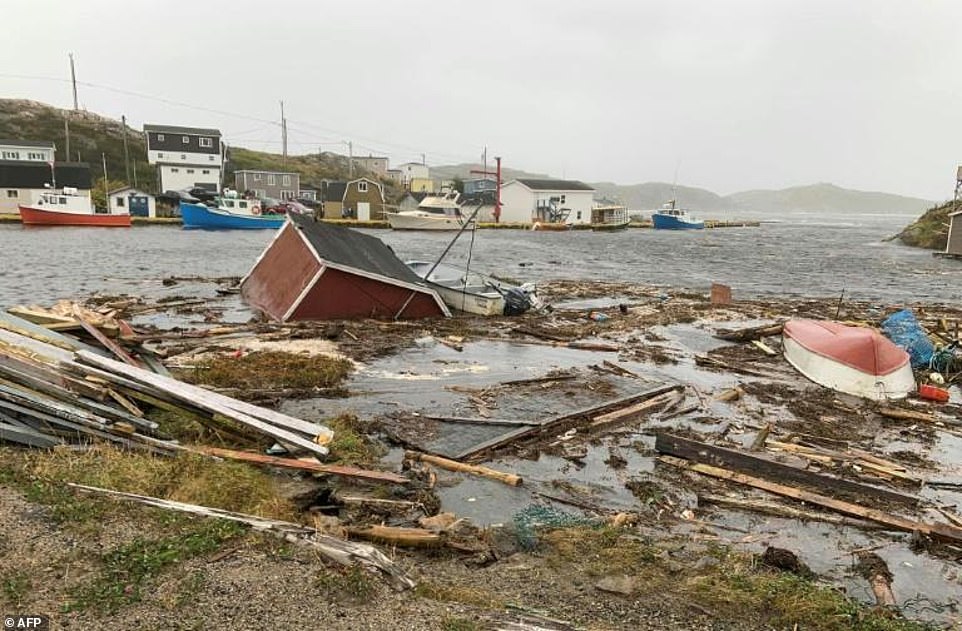