A new study looking into the reliability of the network of electric car charging devices at supermarkets found that 43% are not working. Half of Morrisons chargers were out of order

Shoppers hoping to charge their electric vehicles while doing their weekly grocery shop could be left frustrated as new research has found that more than two in five devices in supermarket car parks are not working.

Analysis of public charging data found that 43 per cent of chargers located at major supermarket sites have connection issues or are completely out of order.

The study, conducted by car leasing comparison site LeaseLoco, found that half of chargers at the Tesco and Morrisons stores reviewed were not working, while two in five at Lidl were displayed as having a fault.

The analysis was conducted using charging points app Zap-Map to review the status of devices located on site at seven major supermarkets on 14 and 15 January.

The sample covered 20 major UK cities* (excluding London) and only looked at supermarket sites within a 12-mile radius of the city centre.

Across the seven supermarkets, where the charger status was live and available on Zap-Map, an average of 57 per cent were showing as operating without issue.

Morrisons had the most comprehensive charger status data on Zap-Map, but this revealed that only half (50 per cent) of the chargers were working on the dates reviewed.

How many chargers in supermarket car parks are working?

The research identified that 12 of the 13 EV chargers on site at four Morrisons stores in and around Swansea were showing on Zap-Map as being out of order.

While only two out of 12 chargers were working at the four Morrisons stores within a 12-mile radius of Portsmouth, the report found.

Asda had the highest percentage of working EV chargers at 74 per cent across all those reviewed where there was available status data on Zap-Map.

Although Tesco sites had a lower percentage of working chargers than Morrisons at 49 per cent, LeaseLoco says this was based on fewer devices, as in many cases online status data wasn’t available for chargers, which were omitted from the study as a result.

From 1 November 2022, Pod Point, which manages devices in Tesco car parks in partnership with Volkswagen, said EV drivers will need to pay 28p per kWh to use the slowest 7kW devices, 40p for 22kW chargers and 50p per kWh to plug into its network of rapid 50kW charging points.

The comparison website said that not having any charger reliability status available for many of the devices it checked will add to the frustration for EV owners, as it means it may not be possible to know in advance if particular chargers are working or not.

For example, across all Aldi stores considered in this research, there was no live status data.

Commenting on the study results, John Wilmot, CEO at LeaseLoco, said supermarkets should be an ideal location for charging, with the average person spending almost an hour in store while doing their grocery shopping, but reliability issues could cause a major headache for EV owners looking to boost batteries while they fill their baskets. 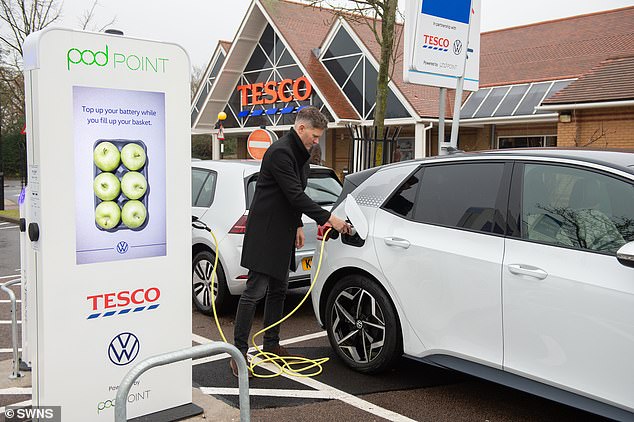 Although Tesco sites had a lower percentage of working chargers than Morrisons at 49%, LeaseLoco says this is based on fewer devices

‘This research shows that pinning your hopes on your local supermarket to top up your car battery could be a frustrating experience,’ John said.

‘It also highlights the challenges of relying on a public charging infrastructure – including charging stations at supermarkets – that is not 100 per cent reliable and where demand outstrips supply.

‘Although some car owners will use public chargers infrequently, as they only need their vehicles for short distances and can charge at home, many will need to use the public network to keep their cars on the road.

‘As more people switch to electric vehicles, the need for a fit-for-purpose charging infrastructure will intensify. And if we’re to avoid seeing a repeat of the scenes witnessed over Christmas, with drivers queuing for hours to charge their EVs, this has to be a priority.’