Would you bee-lieve it? Two honeybees work together to lift the top off a bottle of Fanta

This is the incredible moment two honeybees join forces to open a bottle of Fanta.

Footage captured in São Paulo, Brazil, shows the two bees position themselves on either side of the bottle and use their legs to push the cap up.

Just moments later, the bees manage to lift the top off the bottle of sugary drink and watch as it falls onto the ground.

The two honeybees join forces in order to open a bottle of Fanta in São Paulo, Brazil 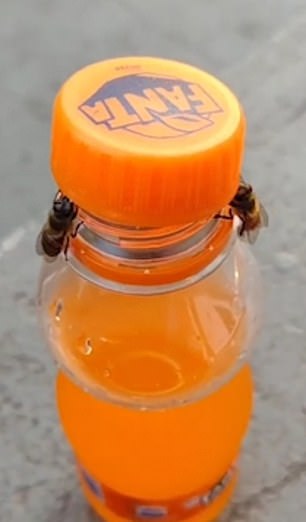 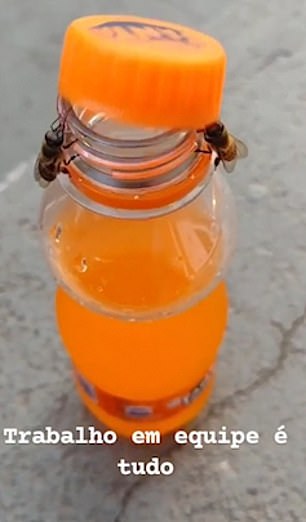 Following the impressive scenes, which were captured on May 17, the filmer told Viral Hog: ‘The video was recorded during my lunch break from work. I got a soda from a customer but soon the bees stole it.’

The footage has since been met with an array of responses from social media users.

One user said: ‘That video is amazing but also terrifying. How the hell have they worked that out?’

Another added: ‘We can just hire them and pay them in Fanta.’

A third person commented: ‘I for one welcome our insect overlords.’

Scientific studies have shed more light on how bees work together and cooperate with each other.

For example, in 2018, Harvard University researchers revealed how a swarm of bees will stick together and move in unison when their nests are rattled.

Scientists spent months shaking and rattling swarms of thousands of honeybees to understand how the insects can work together to keep their swarm in one piece.

They discovered that bees can sense the direction their neighbours are moving in and follow the movements of their fellow insects. 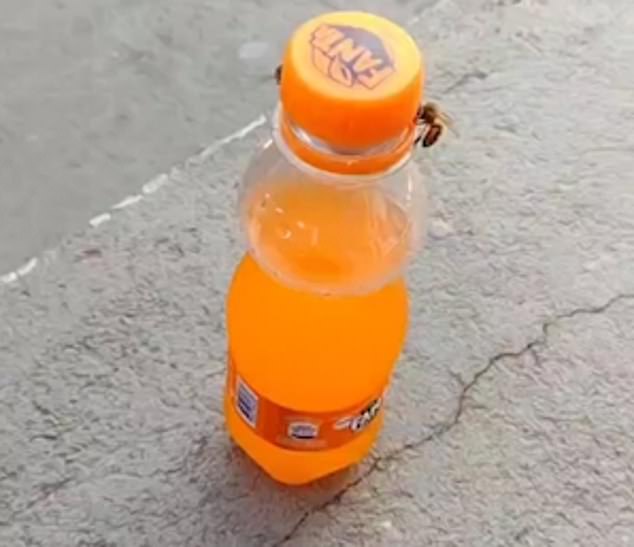 Bees’ fondness for all things sweet is well known, but in 2016, scientists at Queen Mary University of London found that drinking a small droplet of sugar water allowed the insects to enter an emotional state similar to human optimism.

Researchers placed food on a blue flower and no food on a green flower – training the bumblebees to link certain shades of flower with food.

Scientists then confronted the bees with a new ambiguous blue-green flower in order to examine their reaction.

They found that bees that had been given a droplet of sugared water prior to being set loose took less time to land on the blue-green flower.

Scientists said that this indicated that the sweet water raised the mood of the bees.

Senior author Professor Lars Chittka said: ‘The finding that bees exhibit not just surprising levels of intelligence, but also emotion-like states, indicates that we should respect their needs when testing them in experiments, and do more for their conservation.’

‘Our results suggest that similar cognitive responses are occurring in bees.’